The state on Thursday started allowing one person who accompanies a senior 75 or older to get a COVID-19 vaccine at some of the state's public vaccination sites, including at Berkshire County's three public clinics, to get a shot themselves.

The aim of the new rule, as an official of Mayor Linda Tyer's administration noted in a news release Friday, was to increase the number of people older than 75 who receive the vaccine.

But, the system “has resulted in an alarming increase in direct solicitation and advertising to seniors from individuals seeking to get vaccinated,” Roberta McCulloch-Dews, director of administrative services, said in the release.

The city urged senior residents to approach the buddy system with caution.

After going into effect yesterday, the ads cropped up on sites like Craigslist “targeting seniors with offers of payment to serve as their caregivers to take them to their vaccine appointments,” McCulloch-Dews said.

The solicitation ads might provide an opening for “other deceptive behavior,” Pittsfield Police Chief Michael Wynn said in the statement. 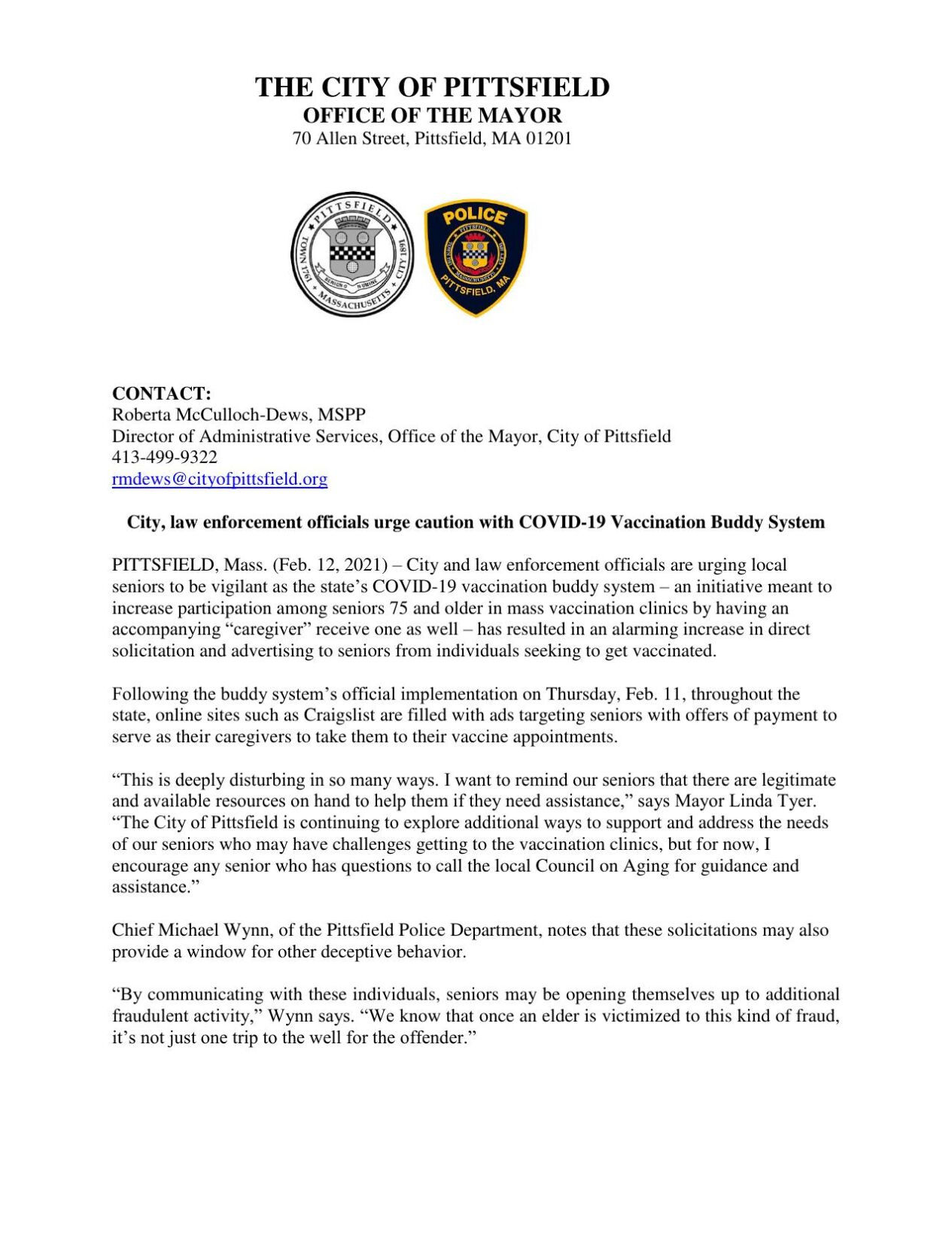 “By communicating with these individuals, seniors may be opening themselves up to additional fraudulent activity,” he said. “We know that once an elder is victimized to this kind of fraud, it’s not just one trip to the well for the offender.”

Tyer called the development “deeply disturbing in so many ways” and said “there are legitimate and available resources on hand to help them [seniors] if they need assistance.”

“The City of Pittsfield is continuing to explore additional ways to support and address the needs of our seniors who may have challenges getting to the vaccination clinics, but for now, I encourage any senior who has questions to call the local Council on Aging for guidance and assistance,” Tyer said in the release.

James Clark, executive director of the city’s Council on Aging, echoed Tyer and said his team already has helped book over 1,000 vaccine reservations for people older than 75.

Local vaccine coordinators said Friday that they moved the Berkshire Community College clinic in Pittsfield temporarily to "private," which means only people with the link can access registration, while they figure out how best to sign up eligible caregivers of those older than 75. Sign-ups have been slow, organizers said, and registration for that clinic ends late Friday.

The state’s buddy system also has caught the attention of the national press.

The New York Times reported Friday that the buddy system, a first-of-its-kind approach, was meant to facilitate access for older adults, many of whom had trouble booking online appointments — but swiftly was criticized by those who said the system could divert precious doses to young people.