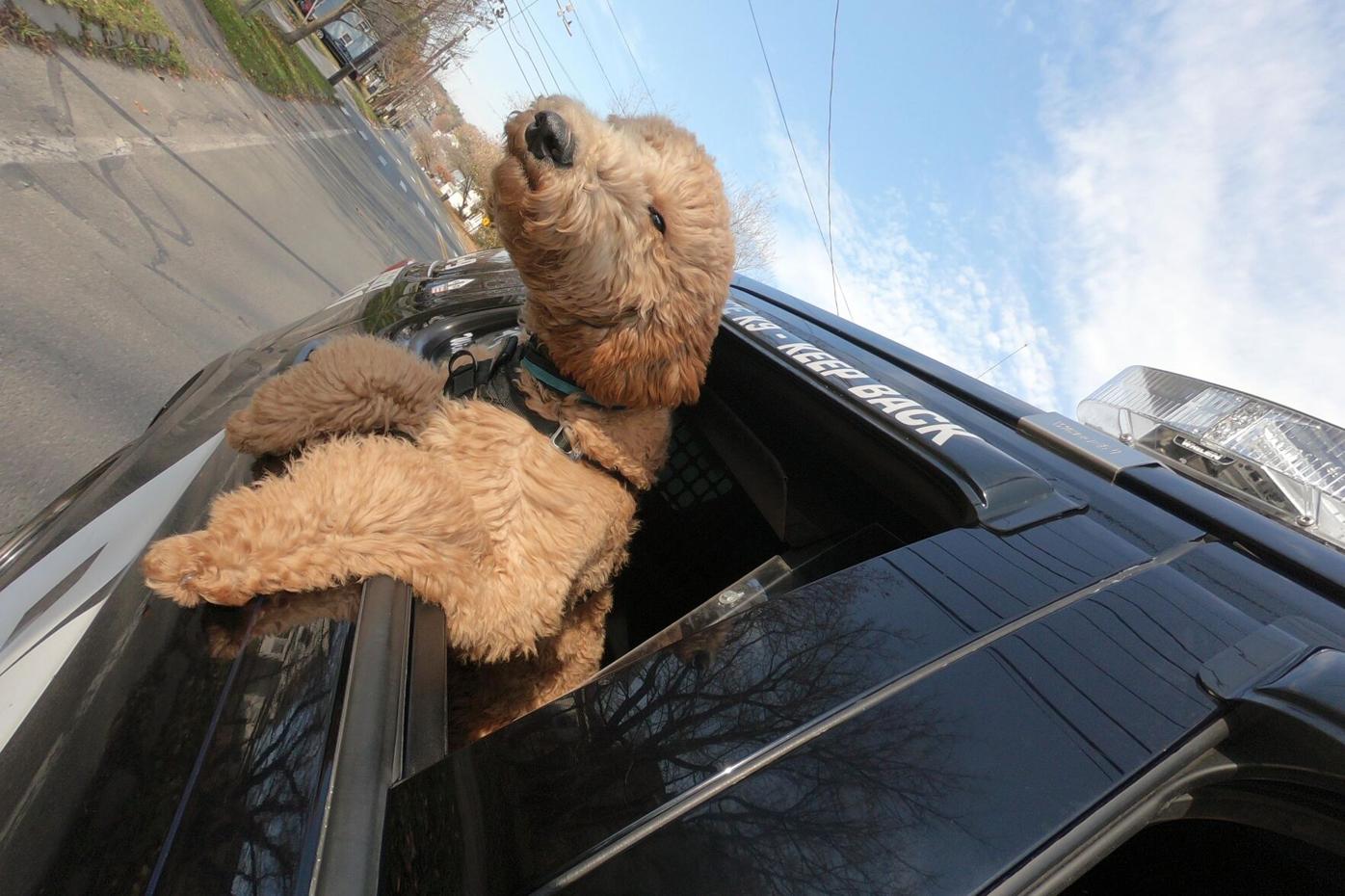 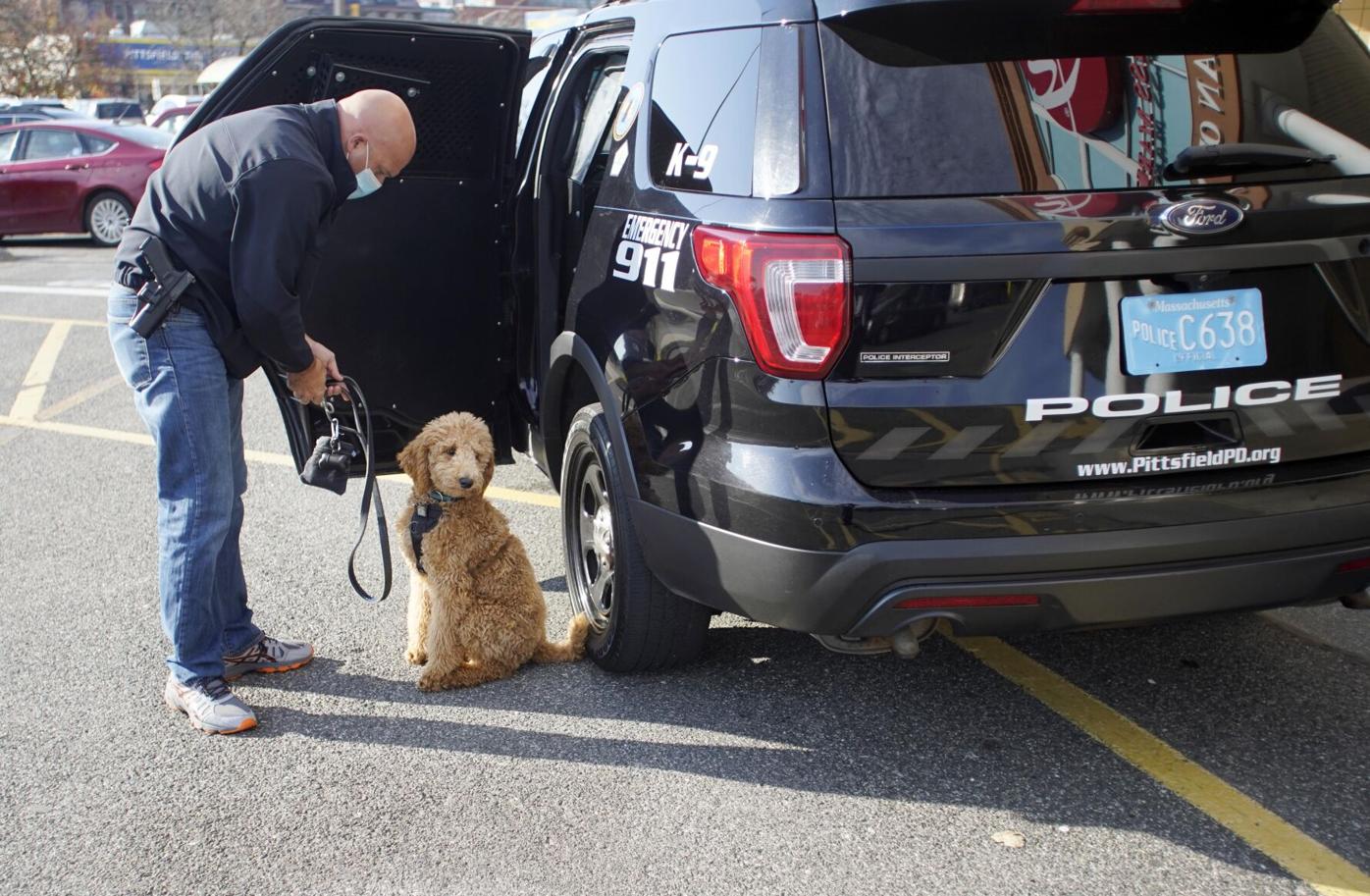 Pittsfield Police Officer Darren Derby works with Winston, a standard poodle training as the department's comfort dog. Winston is still a puppy and is getting used to being around people. 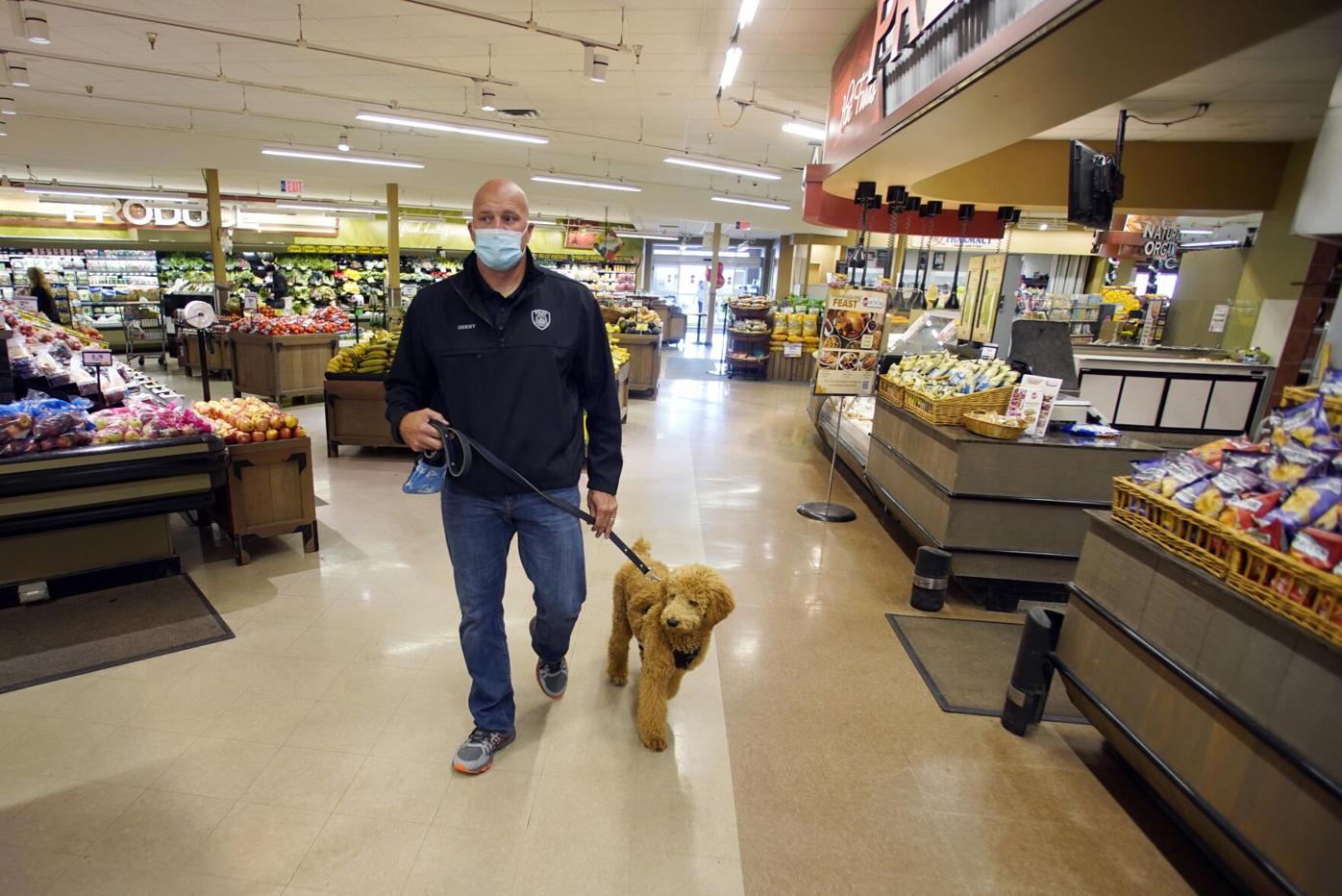 Winston explores the Big Y supermarket with officer Darren Derby in an exercise to learn how to be calm around people and new sounds. 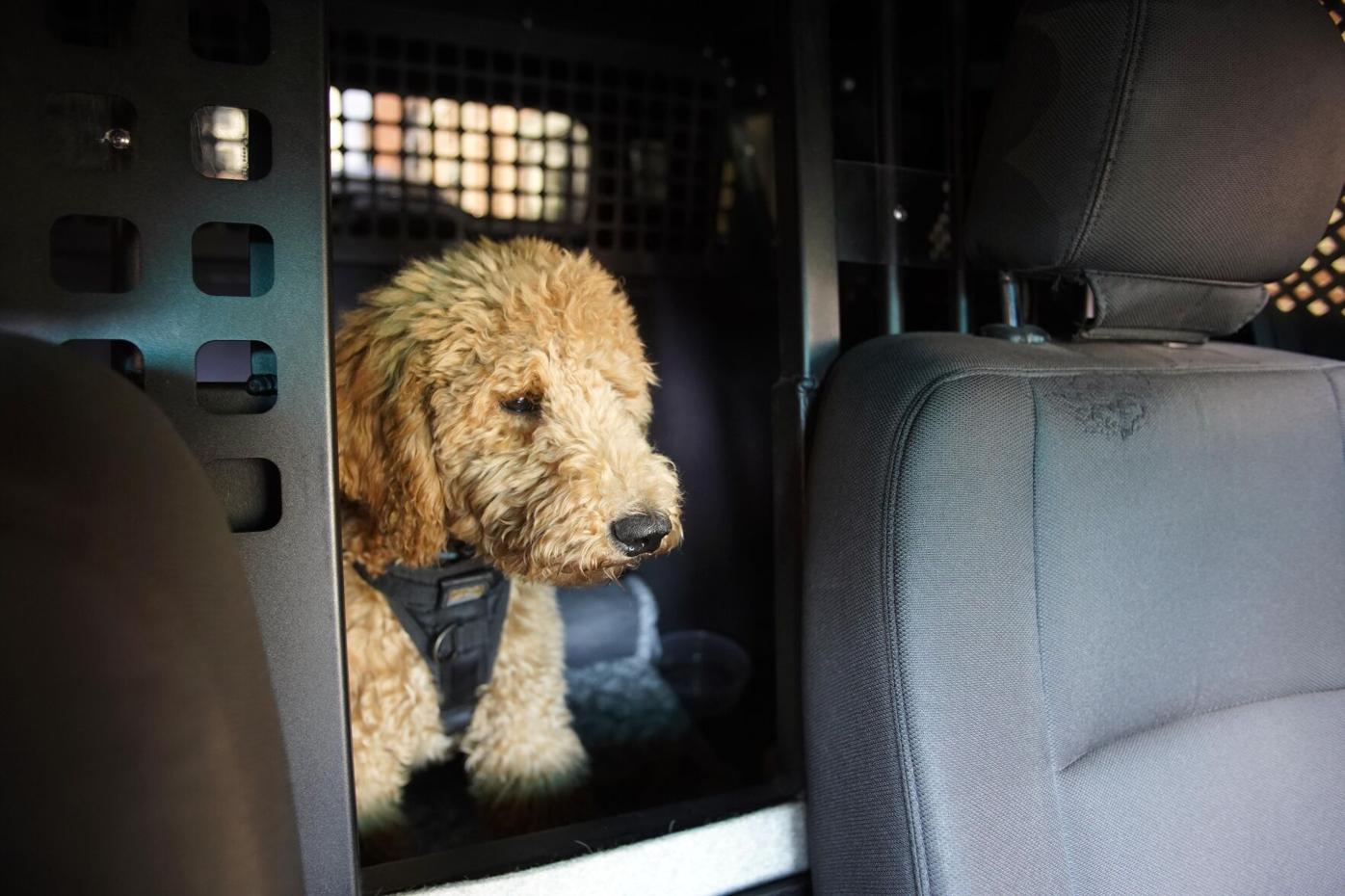 PITTSFIELD — When Officer Darren Derby steps into his cruiser, he doesn’t do it alone.

A fluffy, brown standard poodle named Winston follows. At 35 pounds, Winston is the newest addition to the Pittsfield Police Department.

Pittsfield police officer Darren Derby is working with Winston, a standard poodle in training as a comfort dog.  Winston is still a puppy and …

Pittsfield is one of a handful of Berkshire County police departments to embrace a new kind of police canine — comfort dogs.

On patrol a crisp autumn morning, Derby explained how he sees how Winston, while still in training, is beginning to offer solace in various corners of the community. He has calmed a veteran in distress at Soldier On, and children having a hard time at local schools. And he even is having an impact on other members of the department.

“He’s been helping with mental health cases. I’ve gone into elementary schools, where kids are having some issues,” Derby said. “They’re angry, they’re yelling at people. And I’ve seen the teacher brings a child aside, and again, with no training, just had Winston sit there and let the kid just pet his head.”

Derby is no stranger to community policing. On Facebook, he shares interactions he has with members of the community to his 128,000 followers. And Winston has been featured prominently as of late.

On a recent day, Winston lies in a kennel in the back of the police vehicle that bears his name on the side.

Derby patrols the streets along his pie-shaped beat on the western part of the city, stopping briefly on West Housatonic Street to clear rocks out of the roadway. He stops at Amy Court to let Winston out, with the dog balking at Derby’s attempt to play fetch with a green toy, instead keeping a keen eye trained on a bag of treats.

Back in his patrol car, a Taylor Swift song plays on the radio, and Derby offers his take on why police comfort dogs seemed to be taking root in Berkshire County.

He said a “new generation” of leaders have risen to the helm of various departments, a generation different in some ways than that “old school” as they “were 10 years ago, 15 years ago.”

The minds of younger chiefs and supervisors, he said, seem more open to new ideas surrounding community policing. The dogs fit into the picture, he said.

“[Winston] has allowed me to get closer to a lot of people who I wouldn’t have gotten close to me, even with me being a community outreach person,” Derby said. “Dogs kind of have that — they provide ability to help people put down their guards.”

Winston was donated to the department by Lee Kohlenberger, a former firefighter in Pittsfield. His 10-year tenure was marked by what refers to as a prevailing “toughen up mentality.”

The approach of stifling emotions after exposure to the types of tragedies known in the industry as “critical incidents” has begun to give way, said Kohlenberger, who left the fire department and opened Berkshire Poodles.

“It’s a different ballgame today, and guys, men and women, are getting the help they need so they’re not going home and drinking, or taking out on family, or being a snap case, because that was me,” he said. “I’ve been down, I was down that road. And it ended up being too much for me. All that compounded. So after 10 years, I left.”

Kohlenberger and his wife, Kaitlyn, started breeding in 2010, and more recently hatched a vision to begin donating their standard poodles to first responder agencies, in large part, Kohlenberger said, to bring first responders a bit of relief.

They donated Winston to Pittsfield Police, a yet-to-be-named poodle to the Dalton Police Department, and urge leaders of agencies interested in accepting a comfort poodle to reach out. The Great Barrington Police Department recently welcomed its second comfort dog, a black Labrador named Archer, after the early loss of Beko, who was first police therapy K-9 in Berkshire County.

“If I can make one person having a miserable day smile for five minutes when they are holding this dog, it’s worth every dollar to me,” Kohlenberger said. “Because I’ve been the person in the situation that didn’t have a reason to smile, and would have loved a reason to at some very low points in my career as a firefighter.”

Winston is named in honor of Michael Winston, a Pittsfield Police lieutenant who died three years ago at age 55. When Winston’s on the job, he’s with Derby, who said he and police Chief Michael Wynn “co-parent” the pooch — Winston lives with Wynn’s family, which includes another dog to play with.

Back in his car, Derby spotlights an issue he says is pervasive within his own profession: mental health. Three years ago, Derby found himself not wanting to leave the house, then the gregarious officer received a surprise diagnosis of depression.

“We see it all; you see everything. I’ve seen murders, I’ve seen hangings, I’ve seen babies die, I’ve seen it all,” he said. “So I think what ends up happening is we just get that thick layer of skin.”

That skin can be tough to penetrate, but Derby says he has seen hardened officers begin to soften in Winston’s presence.

“He’s also for us, you know,” Derby said. “I bring him into the station. And you know, cops are, we’re thick-skinned. So at first we got this armor on. When I got a dog I heard, ‘Oh, what’s he gonna do, lick me to death? But now they’re just like, ‘Hey, where’s the dog?’ So it’s already working.”

For stressed out Lenox students and staff, on-duty comfort poodles aim to soothe