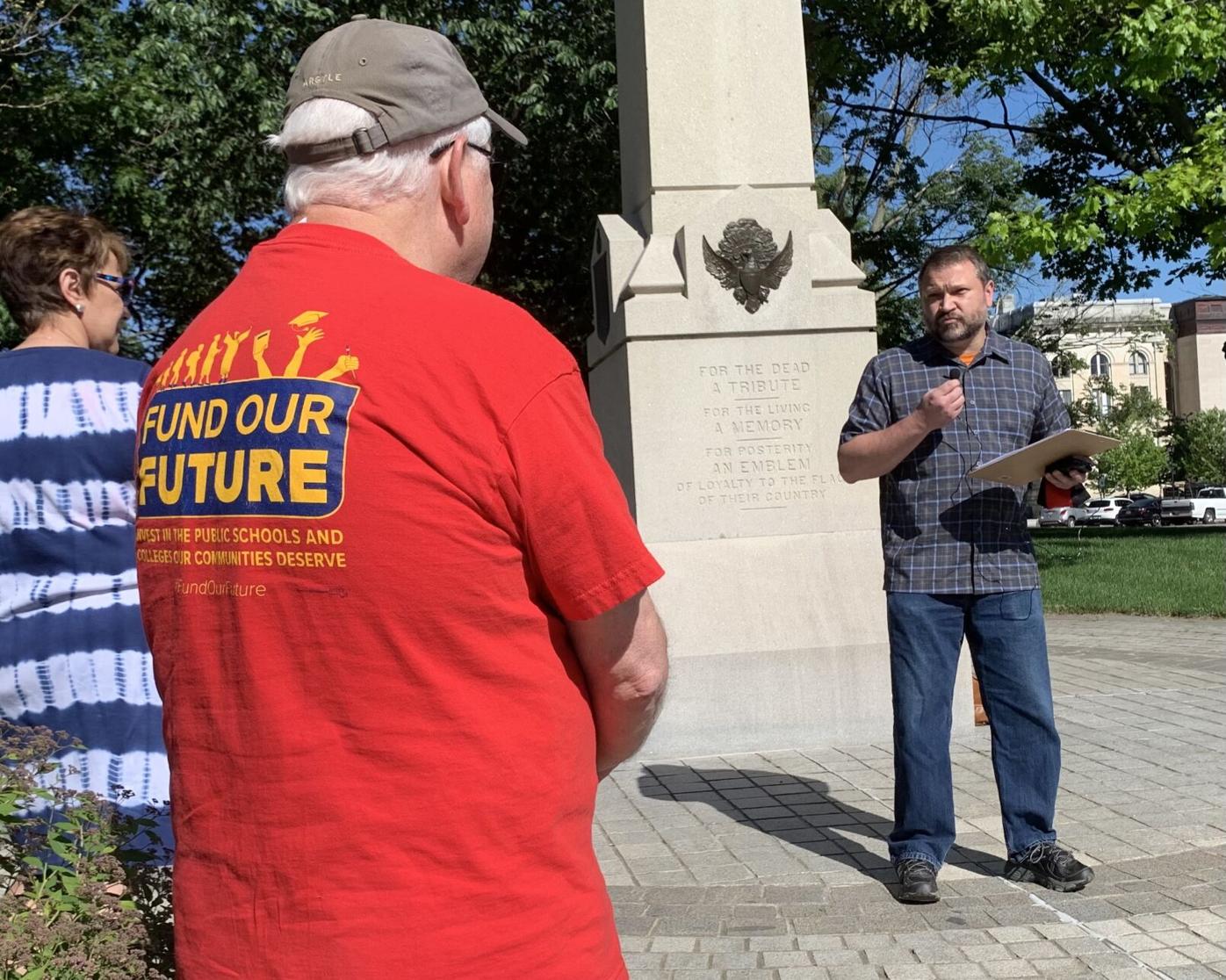 Pittsfield At-Large City Councilor Pete White said at Thursday's rally in support of the Fair Share Amendment that “a modest increase for the highest earners would allow governments to make investments that make sure communities have what they need.” 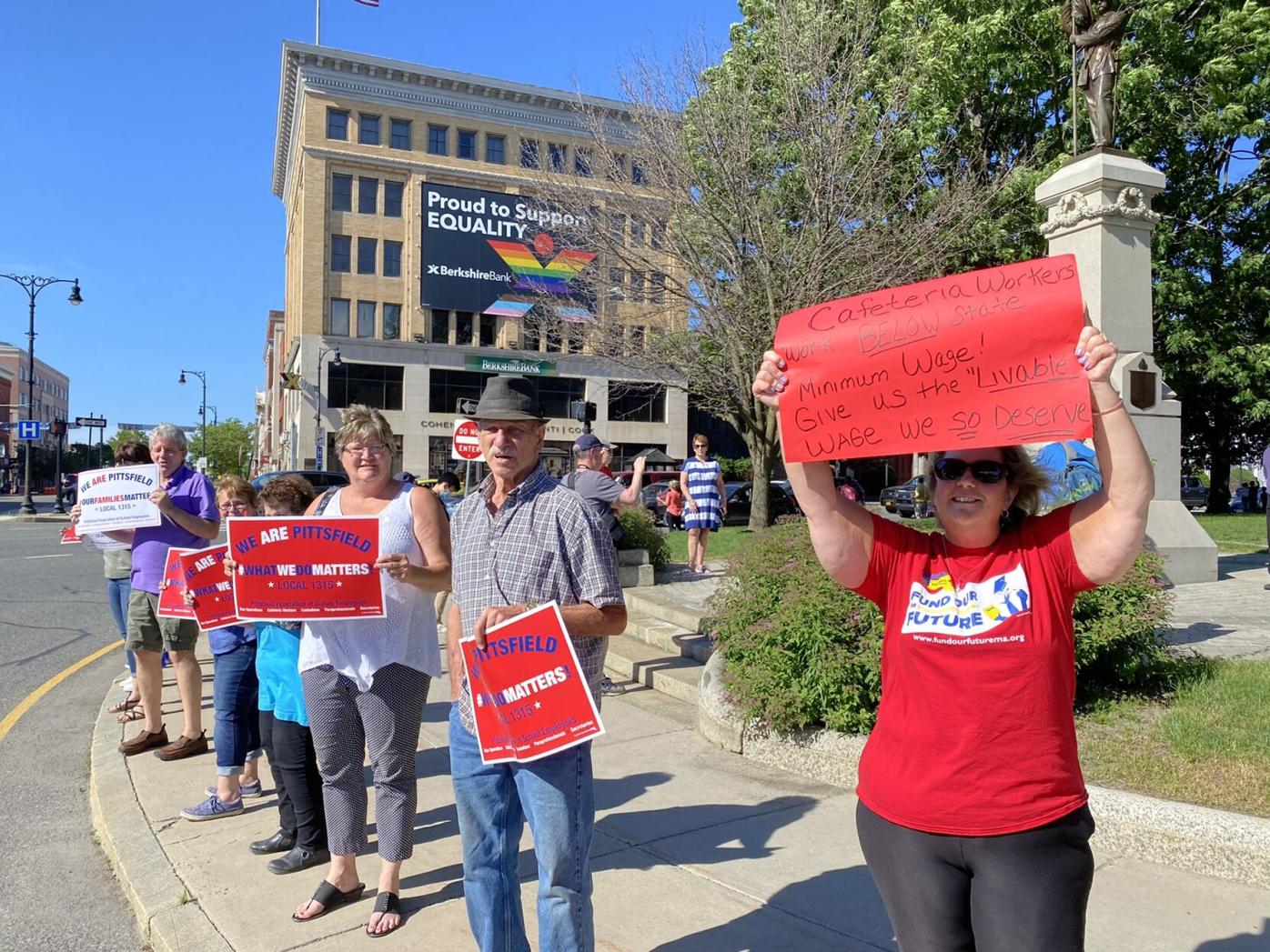 More than 40 people, including members of the Pittsfield Federation of School Employees, attended a Thursday rally in support of the Fair Share Amendment, a 2022 ballot question.

Pittsfield At-Large City Councilor Pete White said at Thursday's rally in support of the Fair Share Amendment that “a modest increase for the highest earners would allow governments to make investments that make sure communities have what they need.”

More than 40 people, including members of the Pittsfield Federation of School Employees, attended a Thursday rally in support of the Fair Share Amendment, a 2022 ballot question.

PITTSFIELD — For Massachusetts to fund schools and transportation sufficiently, supporters of a 2022 ballot question say, its top earners need to pay a bit more in taxes.

More than 40 people gathered in Park Square on Thursday in support of the Fair Share Amendment, which would support investments in education and transportation by requiring residents making more than $1 million a year to pay an extra 4 percentage points on income above $1 million. A day before the rally, the Massachusetts Legislature had voted 159-41 to advance the amendment to the ballot for a November 2022 vote.

While 34 states have a progressive taxation system, meaning that top earners pay a greater rate than lower earners, Massachusetts taxes income at a flat rate of 5 percent.

“We can’t ask working families to pay any more than they already do,” At-Large Pittsfield City Councilor Pete White said at the rally, noting that estimates show the amendment could raise up to $2 billion in annual revenue for the state. “A modest increase for the highest earners would allow governments to make investments that make sure communities have what they need.”

There are nearly 15 months to go until voters weigh in, but opponents to the amendment have already kickstarted the opposition campaign. A Tuesday report, supported by a grant from the business-aligned Fiscal Alliance Foundation, estimates that the amendment would cost the state more than 9,000 private-sector jobs in the first year due to top earners leaving the state for lower-cost residences.

Fair Share Amendment backers have heard that argument before, and they don’t buy it.

“They’re basically fearmongering and misleading people to think that millionaires will leave,” said Lydia Wood, a field organizer with the Western Massachusetts Area Labor Federation. “The reality is that plenty of other states have higher tax rates for top earners, and they haven’t had problems with people leaving.”

California asks top earners to pay the highest rate in the nation, 13.3 percent. Several states have set a top rate of around 9 percent, including New York, New Jersey and Vermont.

Gov. Charlie Baker suggested Thursday that he would oppose the amendment, indicating that the billions in federal aid that Massachusetts has yet to spend make it unnecessary, in his view, to raise additional revenue.

Some amendment supporters, however, view the tax change as necessary in the long term to sustain investments that the state makes using one-time federal aid. They also believe new revenue would help fund the Student Opportunity Act, which when passed in 2019 was slated to increase annual school spending by $1.5 billion by the time it is fully funded.

Beyond wage increases, another top priority for the union is to gain greater support from the district with health care costs, said Walter Armstrong, a field organizer with the American Federation of Teachers.

Amburn also spoke in favor of the Fair Share Amendment, arguing that millionaires can “cough it up” to better fund schools.

Raise Up Massachusetts, a coalition of labor unions, community organizations and faith-based groups, first worked to put the amendment on the 2018 ballot, but the Supreme Judicial Court struck the question from the ballot because it contained elements that were not “mutually dependent,” breaking a constitutional rule. Top business groups — including the Massachusetts High Technology Council, Massachusetts Taxpayers Foundation, Associated Industries of Massachusetts and the Massachusetts chapter of the the National Federation of Independent Business — led that legal challenge to the amendment.

The question is not expected to face another legal challenge because the Legislature initiated the process for the 2022 ballot question.

State Sen. Adam Hinds, D-Pittsfield, said at the Thursday rally that the amendment can help rectify widening inequality. Although economic growth that was once widely shared, Hinds said, the economy has since the late 20th century tilted in the favor of the top 1 percent of earners.

“It’s not because the 99 percent aren’t working hard enough,” Hinds said. “In fact, they’re working harder than ever before, but their wages have gone down as incomes for the top 1 percent have gone up.”