PITTSFIELD — Union teachers in Pittsfield say a mandate from the School Committee to resume in-person instruction violates a labor agreement and should be scrapped.

The United Educators of Pittsfield said Tuesday it has filed an unfair labor practice complaint with the state Department of Labor Relations. The filing alleges that a decision Jan. 27 by the School Committee to return to in-person teaching violates a memorandum of agreement reached with the union. The union views that vote as an example of unilateral decision-making, in a collective bargaining environment, and constitutes bargaining in bad faith.

Last week, the union's executive board said it “will be availing itself of all appropriate contractual and legal remedies within its purview” and would withdraw from weekly negotiation sessions.

On Tuesday, living up to its pledge of last week, the union resorted to the remedy offered by the unfair labor practice complaint. The complaint asks the state to order the School Committee to rescind its January decision about the format for instruction and have teachers resume remote learning that has been in place for much of the pandemic. 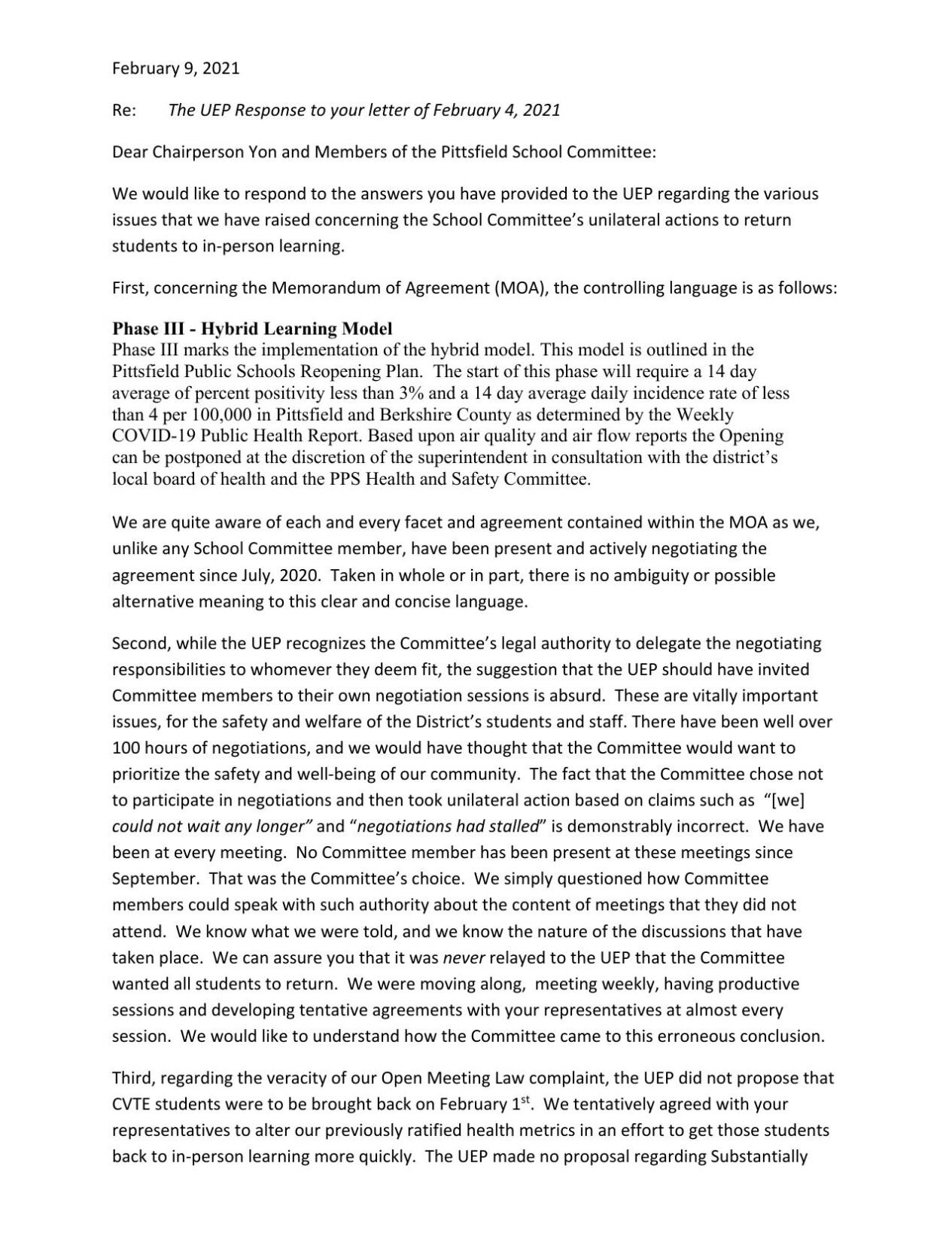 The school panel voted in late January to begin getting vocational, career and technical students back to school. A plan at the time called for other students to begin a shift to hybrid instruction the week of Feb. 22.

Mayor Linda Tyer said at the time that with COVID-19 numbers improving, it was time to return students to classrooms. She said the shift could be done safely. “It’s time to get our kids back to school,” she said.

Melissa Campbell, the union’s president, said Tuesday that the School Committee’s action in January flew in the face of an agreement reached last summer. “After negotiating with the School Committee’s representatives for over 100 hours starting in July, the UEP is shocked and dismayed that the committee would take these unilateral actions that are a direct violation of the terms we agreed to and ratified,” Campbell said in a statement.

Separately, a letter Tuesday from the union’s executive board to the School Committee asks officials to reverse course.

“Without prejudicing any of the contractual and legal actions the UEP has taken, we formally request that you reconsider and rescind the unilateral actions taken at the January 27, 2021, School Committee meeting,” the letter says.

The union contends in Tuesday’s letter that the agreement reached last year called for “hybrid” learning, which involves some degree of in-person instruction, only after seeing a 14-day average of COVID-19 test positivity of less than 3 percent and a 14-day average daily incidence rate of less than four new cases per 100,000 in Pittsfield and in Berkshire County.

PITTSFIELD — With 200,000 masks stockpiled and 600 air purifiers on their way, Pittsfield school officials indicated Wednesday they are ready …