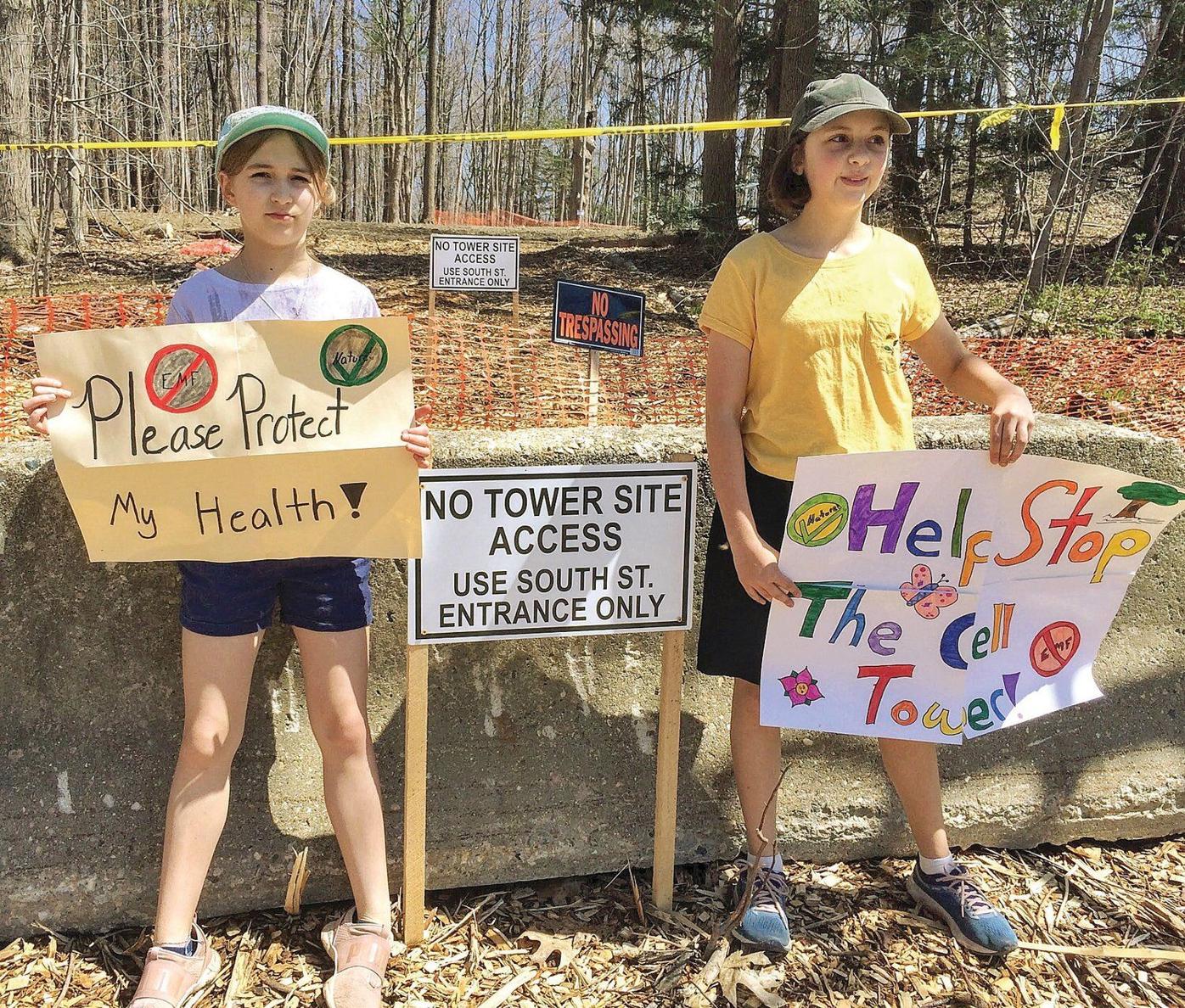 Jocelyn Coco Gilardi, left, and her sister, Amelia, stand last spring at the top of Alma Street in Pittsfield, near the project site with signs they created. Their mother, Courtney Gilardi, has led neighborhood opposition to a cell tower. On Wednesday, Amelia Gilardi told the health board: “People should not have to choose between the house and their health.” 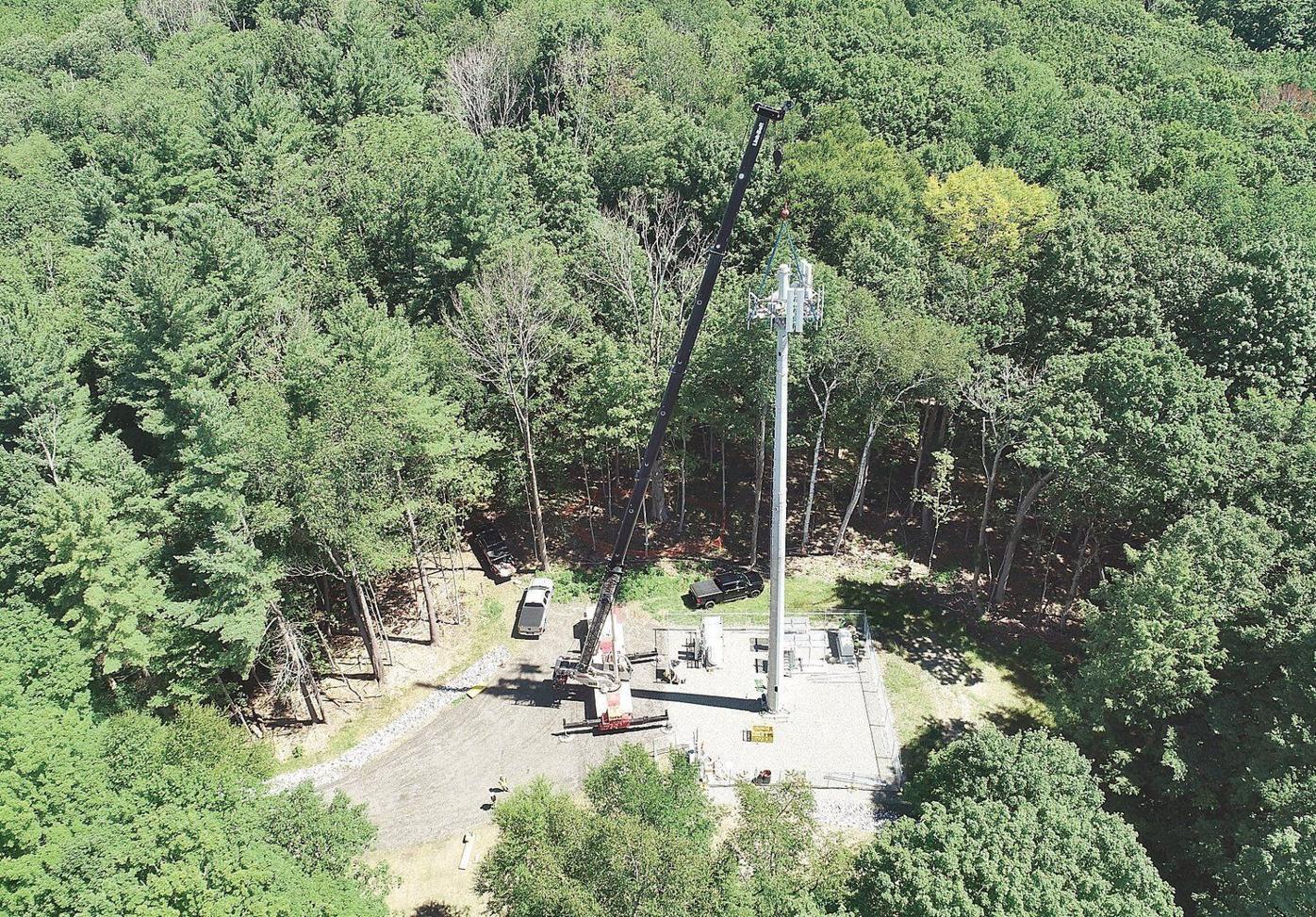 In August, a crew nears completion of a 115-foot monopole that Verizon Wireless erected in a south Pittsfield neighborhood. The city's Board of Health voted Wednesday to have tests conducted to check whether the tower is exceeding Federal Communications Commission limits on allowable electromagnetic radiation.

PITTSFIELD — Moved by months of reports of illness near a new cell phone tower, Pittsfield health officials voted Wednesday to hire a company to test radiation levels from the installation, while acknowledging that there are limits to the city’s ability to curtail its use.

After hearing from experts in the field, who appealed to the city to act, the Board of Health voted to procure help in gauging whether the Verizon Wireless tower that went into operation late last summer near Alma Street is in compliance with federal limits on radio frequency radiation.

“We should be advocating for people’s health as far as we can,” said member Brad Gordon, who moved to conduct the tests. “That’s a great starting point for our community, so we know what we can and cannot do.”

The unanimous vote came after plans by the board to enlist help from the state Department of Public Health fell apart over the past month.

Gina Armstrong, the Pittsfield health director, told the board and residents, during the Zoom session, that she had believed the DPH’s environmental toxicology program would help assess health consequences from the Pittsfield tower.

The state declined to provide that level of assistance, or to supply its in-house experts for a forum on the issue that had been promised at the board’s April meeting.

“We were incredibly disappointed in the lack of options that the Mass. Department of Public Health could provide,” Armstrong said.

“We had hoped that Mass. DPH would compile information from our city and use that to advocate for additional studies on [the] health impact” of cell towers, she said.

Jocelyn Coco Gilardi, left, and her sister, Amelia, stand last spring at the top of Alma Street in Pittsfield, near the project site with sign…

Steve Smith, the board’s vice chair, told residents that he was disappointed to learn that the DPH would not be sending toxicology experts to investigate, a development The Eagle reported Tuesday.

“Like we had been told,” Smith said. The panel’s chairman, Dr. Alan Kulberg, did not attend the meeting.

A spokeswoman for the DPH said this week, in response to questions from The Eagle, that the agency is not conducting the kind of epidemiological study outlined for residents at the board’s April meeting.

Armstrong said the city will move now to shape its own forum, enlisting help from what Gordon said should be a range of expert perspectives, including some of those who logged on to Wednesday’s meeting.

Those experts included people the board did not allow to speak at its April meeting, when it limited public comment to local residents.

Several of those people joined the Zoom meeting by video or audio, including Dr. Paul Heroux, a physicist and toxicologist who spoke from Quebec, Canada, where he works with McGill University.

Heroux said it is well established that exposure to electromagnetic radiation can make people sick.

Michael Muadin, of New Lebanon, N.Y., a 40-year resident of Pittsfield, told the board he was made sick by radiation from a cell base station on the roof of Berkshire Community College, where he worked. He said he developed microwave radiation syndrome in 2017.

Muadin urged the board to test the area of the new Pittsfield tower for evidence of excessive radiation, citing cases elsewhere in which telecom companies go beyond Federal Communications Commission limits.

“Most towers have never been tested,” he said. “Please open an investigation into this outbreak of microwave radiation syndrome.”

Sheena Symington, director of the Electrosensitive Society, offered help to the city as it navigates a complex subject.

Symington said her group has been contacted by people from around the world, including those who live near cell towers and report negative health effects. She said towers should be located away from neighborhoods.

“It’s been well-documented that they have a negative impact on kids and adults,” she said.

Children, she said, can be affected by electromagnetic radiation even within allowable FCC levels.

“It’s real, and it really needs to be accommodated and addressed in the best ways possible,” Symington said.

Several neighborhood residents urged the board to take steps, with one, Courtney Gilardi, recounting her long wait for the city to examine possible health consequences of the tower.

“We are begging you to act on this and to do it faster … and start this conversation tonight,” she said.

Gilardi’s 13-year-old daughter, Amelia, said that, since August, she frequently has felt nauseated.

“People should not have to choose between the house and their health,” she said.

The forum on electromagnetic radiation and human health might be held as soon as a board session June 2.

“We want to assure the community that although Mass. DPH is not going to be one of the presenters, we are going to pursue that information session,” Armstrong said.