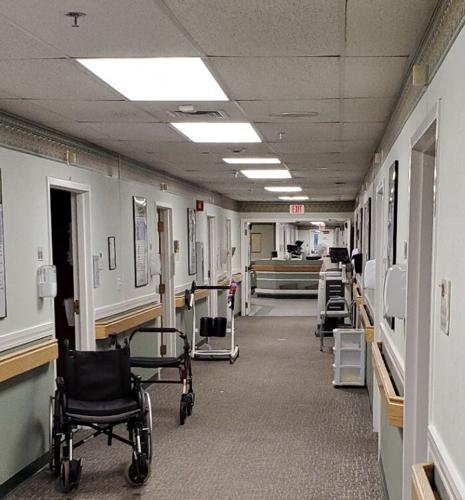 A hallway at Springside Rehabilitation and Nursing Center in Pittsfield. 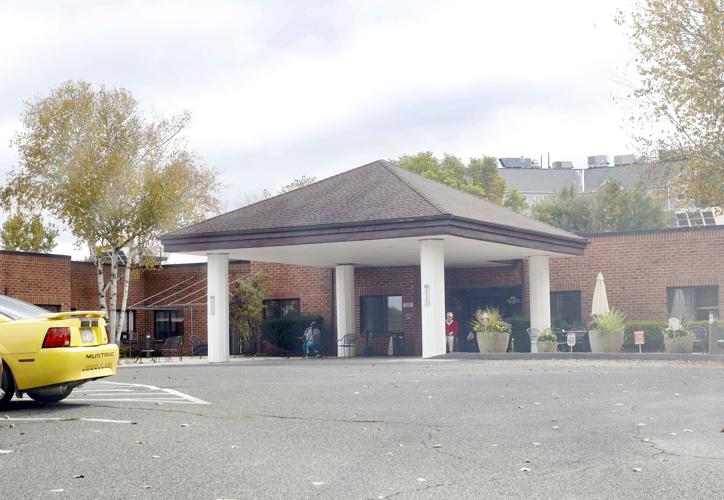 The Springside Rehabilitation and Skilled Care Center in Pittsfield, where residents has reportedly been compromised due to an ongoing staffing crisis now worsened by a COVID-19 outbreak.

PITTSFIELD — Fearing for her mother’s safety, a woman last week asked police to help transfer her parent from a Pittsfield nursing home with a history of severe staffing shortages and neglect — a place also beset by a recent COVID-19 outbreak.

“It would be on for three hours. It was because she needed something. She had to go to the bathroom. She needed medicine. They would constantly turn it off.” Molly Thomas, daughter of a resident who alleges severe neglect at Springside, speaking of unanswered call bells

Pittsfield Police confirmed that an officer went Thursday to Springside Rehabilitation and Skilled Care Center and arranged for the woman, 67, to be taken by ambulance to Berkshire Medical Center, where she was evaluated. Her condition is “OK,” according to her family. They asked that her name be withheld to protect her privacy.

Pittsfield police then called the nursing home twice about that transfer. No one picked up, the police report says.

Interviews with people familiar with care at Springside describe a chaotic scene over the last several weeks, as the facility confronted both the COVID-19 outbreak and what’s believed to have been another widespread infection that caused constant diarrhea and vomiting, as well as multiple falls and broken bones. Nursing aides are going without breaks, they said.

To shore up care at the facility, the state Department of Public Health sent a rapid response team of health care workers to Springside, an agency spokesperson said. The team arrived Feb. 8 and is set to leave Tuesday, according family members of residents. The agency also has placed an admissions freeze on the facility, though Springside did not appear on the state’s list of facilities with freezes in place last week.

Springside also accepted the state DPH’s offer to call in National Guard health care workers, as it did during a COVID-19 outbreak in January 2021.

The Guard has not been to the facility yet this year, but “that is expected to change by the end of this week,” according to a Guard spokesperson. There is no charge to the facility for the Guard’s assistance.

Other people with family staying at the facility, as well as health care workers familiar with the situation, continue to contact The Eagle to report perceived neglect due to understaffing, an assessment the nursing home disputes. They also say the facility’s main phone and administrator numbers mostly go unanswered.

Molly Thomas, who called police in order to help her mother, said she wanted to speak out about what she termed “inhumane care” of her mother, who has multiple health issues, including breathing problems. Her mother is one of dozens of residents and staff who tested positive for COVID-19 in the last several weeks, further depleting what workers say are already unsafe staffing levels.

Yet, the virus was not Thomas’ main concern: the level of care residents are receiving.

“I don’t want this to ever happen to anyone else,” Thomas said of what she views as substandard care. The facility admitted her mother on Jan. 12 to recover from an injury caused by one of her illnesses, and to manage her pain. She planned to return home.

Springside owner and BaneCare President Kevin Morris declined to comment when asked how the company plans to augment staffing. A spokesperson for BaneCare told The Eagle in an email that medical privacy laws prevent the company from commenting on a specific situation, but nonetheless denied that Thomas’ mother had been neglected.

“BaneCare and Springside are proud of the care being provided to this resident as well as all of the residents within this facility,” wrote Emily Sugrue, the company’s director of marketing and communications. “Springside is sufficiently staffed at this time to meet the needs of our residents.”

A recent analysis of federal data by The Eagle shows that Springside, like most nursing homes, has not maintained what the government considers to be adequate staffing levels before and during the pandemic. Federal regulators have fined and cited the company for medication errors and neglect, most notably in January 2021, when a COVID-19 outbreak reduced staffing to dangerous levels.

Springside has had 42 resident cases and 18 staff cases since Jan. 25 of this year, according to information on the facility’s website. As of its Feb. 10 report, one resident tested positive. Monday’s report showed no new cases.

Carolyn Villanova, whose 99-year-old mother is at Springside, is one of several people who have contacted the paper to express concern about conditions there. Villanova said symptoms from the virus in residents have been mild.

In her family’s case, she said she is more worried about neglect and her mother’s end-of-life dignity. She says a number of other residents are afraid to speak up, worried about retaliation. She also said her mother has had some wonderful aides in her three years there.

“The administrator calls and begs people not to come,” Villanova said, noting she typically visits three times a week. “They haven’t had any activities in at least six or seven weeks. So [they] sit there with nothing to do.”

On the night shift, there is one nursing aide per 53 residents in the locked dementia unit as of Monday, according to someone familiar with the facility who fears retaliation for speaking out. The other unit has one aide for about the same number of residents. The two other shifts have two aides. The DPH’s rapid response team added one registered nurse to the night shift over the past week, and two RNs to the two day shifts. They said it is standard policy for the facility to have only one RN on the night shift.

The outbreak made an existing problem worse.

“We were extremely short-staffed before the outbreak,” said the person familiar with care conditions. “Now we have people that literally are so hard to control and [some are] falling and breaking bones.”

‘Does not feel safe’

Thomas, who is from Pittsfield and lives in North Carolina, said her mother’s call bell would go unanswered for hours at a time. Her medications were late or forgotten, her blood pressure not taken daily, and she wasn’t being helped to the bathroom or getting an important piece of medical equipment changed, Thomas said, based on what her mother reported to her. Her mother has lost about 10 pounds since she arrived there, and is down to 98 pounds, she added.

Thomas’ calls to the facility almost always went unanswered, she said; messages left for the administrator were not returned. The ombudsman at Elder Services of Berkshire County also did not return her call as of Friday, but has since responded, Thomas said.

Alarmed, Thomas booked a plane ticket and planned to have her mother discharged as of Tuesday. She decided not to wait when she got the urgent call of distress early Thursday.

The evening before, a staffer brought her mother her medicine and closed her door for the night.

“Her door was shut and she had no water,” Thomas said, noting that she has to stay hydrated for medical reasons. “She called Thursday morning at 6 and said, ‘They’re trying to kill me.’”

The Elder Services ombudsman, Amanda Height, said she is unable to comment on any cases she “may or may not be working on at the moment.”

Height referred questions to Carolyn Fenn, director of the state’s Long-Term Care Ombudsman Program. Fenn explained that the program advocates for residents but is not an “emergency service.”

“We try to get back to people in a couple of business days, and we try to advise people up front when they call our line that if it’s an emergency of abuse, neglect or mistreatment to call the DPH,” Fenn said. The program does not regulate nursing homes.

Fenn said the situation sounds familiar. “There are many situations across Massachusetts as to what you describe,” she said, speaking to poor staffing levels.

From the Department of Public Health

If a resident, their representative, or their family members have complaints or concerns about the care they receive while in a long-term care facility, they may contact the facility’s Long Term Care Ombudsman to provide assistance or they may file a complaint with DPH by calling (800)-462-5540.

Though care for her mother began well, Thomas said it started to deteriorate to the point where nursing aides would ignore her requests for help, and told her to “lay off the call bell.”

“It would be on for three hours,” Thomas said, based on her mothers’ reports. “It was because she needed something. She had to go to the bathroom. She needed medicine. They would constantly turn it off.”

Her mother would call Thomas 10 to 12 times a day and say, “Nobody’s coming, nobody’s coming. I’m scared,” Thomas said. Medication arrived late, or never came. One nurse starting her shift addressed the issue by saying to her mother, “I don’t know why she didn’t give it to you.”

The police officer arrived just after 7 a.m. Thursday and spoke with Thomas’ mother. He described her comments to him in his report.

“Her needs are not being met,” the officer writes. “[Redacted] is not given on time. [H]er daughter is repeatedly hung up on. Her [redacted] does not taste right. Does not feel safe. Staff is unattentive.”

The officer left her the police station number and said to call if she wasn’t removed from Springside within an hour. When police twice called the facility to advise them of the request to move her to the hospital, both times no one answered.

Thomas says she can’t understand how regulators can allow conditions such as those described by her mother, and why doctors going in and out of facilities appear to normalize it.

“A nurse quit when mom was there and said, ‘This has to stop,’ ” Thomas said. “I don’t want anyone else to go through this.”

Four National Guard members and 13 additional health care workers from the state arrived Thursday at a city nursing home where reports of neglect have accelerated in recent weeks amid a coronavirus outbreak.

Night shift workers in Pittsfield nursing home unit say there aren’t enough of them, even though their numbers are legal

Two whistleblowers say too few staffers are responsible for the care of around 50 residents in the locked dementia unit at the Springside nursing home in Pittsfield. They claim that poses a hazard to residents and is an unsustainable work environment. The company says residents and their families are making false claims.