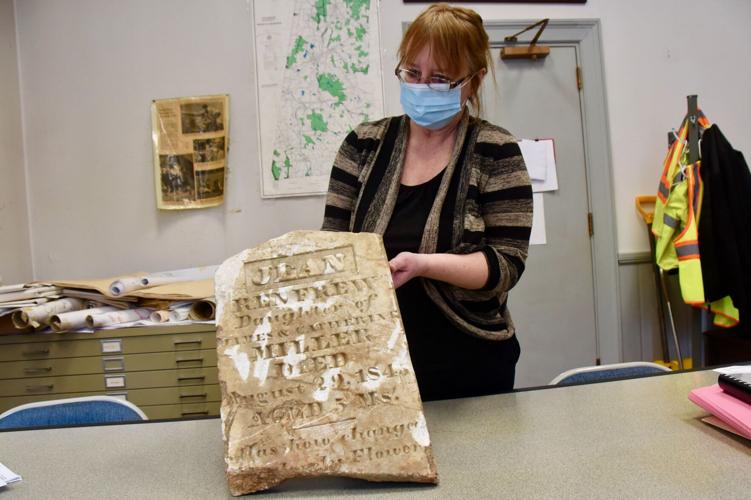 Clarksburg Town Administrator Rebecca Stone on Monday displays a grave marker from 1845 for a girl of 5 months old. The marker has been in the town administrator’s office for more than 30 years, and the town’s Historical Commission is seeking to locate the descendants of the Miller family, or the grave that the stone belongs to. 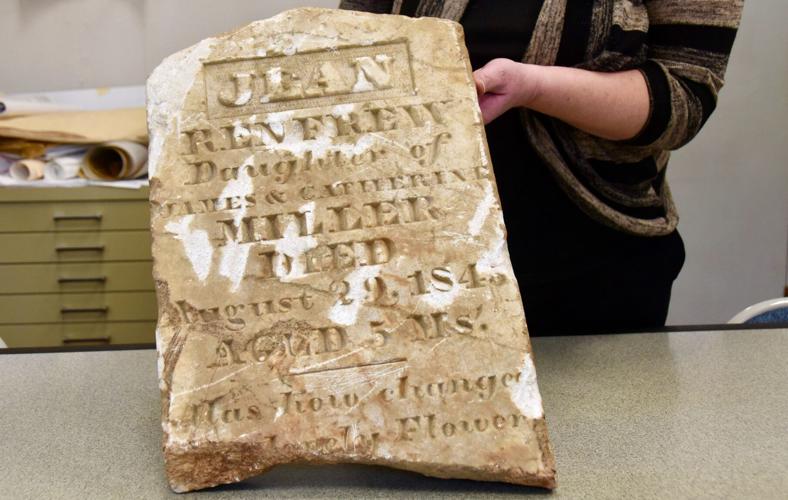 The registries of graves at the two main cemeteries in Clarksburg have no listing for Jean Renfrew Miller or family names that would match those on a mysterious gravestone that has resided for decades at Town Hall. But there are a number of family burial sites around the area that are little known or even lost to the ages where the gravestone could have originated.

CLARKSBURG — The hunt is on for the lost 176-year-old grave of a 5-month-old girl.

For more than 35 years, a gravestone has been haunting the offices of Clarksburg Town Hall, and nobody could remember how it got there, or where it came from.

People have been working around the stone for decades, sometimes wondering about its origins, but mostly just treating it like part of the office decor. Through the years, it was kept in the town clerk’s office, and for at least the past 20 years, it has been in the town administrator’s office.

It seems to be a classic limestone grave marker. It belongs to the grave for Jean Renfrew Miller, who died at 5 months old in 1845. According to the inscription on the partially legible stone, she was the daughter of James and Catherine Miller. The last line on the stone partially is visible and reads: “Alas how changed … lovely flower.”

“It’s been there for so long, it’s a mystery,” said Jeanne Moulthrop, a member of the Clarksburg Historical Commission.

Current Town Administrator Rebecca Stone, former Town Administrator Carl McKinney and his predecessor, Michael Canales, all said the gravestone was in their office when they worked there, but none had any idea how it got there or where it belongs.

Canales, who now is the town administrator in Stockbridge, said the stone was there when he started in 2000.

“The stone was there when I started as administrator last November,” she said. “I don’t know how it got there — I just don’t know.”

She said more attention has been drawn to the stone since the town Historical Commission posted a query a couple of years ago on the town’s website seeking clues about where it belongs.

“We thought we’d try and find where it belongs, but we’re coming up empty,” Moulthrop said. “It’s a real curiosity at this point.”

“It’s intriguing,” Stone noted. “Somewhere there’s a family that belongs with that gravestone. We would love to find a final resting place for it.”

Turns out, a former town employee was there when the gravestone landed at Town Hall.

Debbie Choquette, a former administrative assistant for years, remembers when former Town Clerk Barbara Perry was visited by a “woman and a gentleman” who were hiking through the area and found the gravestone in a river or stream. They brought it to Town Hall for safekeeping.

That was in 1985 or thereabouts, Choquette recalled.

“I don’t know where she found it, which river or brook they got it from,” she said.

The registries of graves at the two main town cemeteries have no listing for the baby girl or family names that would match. But there are a number of family burial sites around the area that are little known or even lost to the ages where the gravestone could have originated, Choquette noted.

Ed Denault, a member of the Clarksburg Historical Commission and the VFW, has been volunteering along with others in the VFW to clean up the town cemeteries. He said they maintain the cemeteries for the same reason they want to find a home for the wayward gravestone: “We don’t want it to be lost to history. She has a home somewhere.”

He knows pretty much every indentation in the cemeteries where the headstones are missing, but none of them matches the Miller stone, which seems to have broken off from its base near ground level.

Denault said that if anyone has a clue about the origin of the gravestone, or the Miller baby’s family, they should call Moulthrop at 413-663-3630.

“If we could find the spot where it belongs, we could fix it up easy,” Denault said. “But at this point, I don’t think it’s from Clarksburg. It’s driving me crazy — I’ve got to get to the bottom of this.”