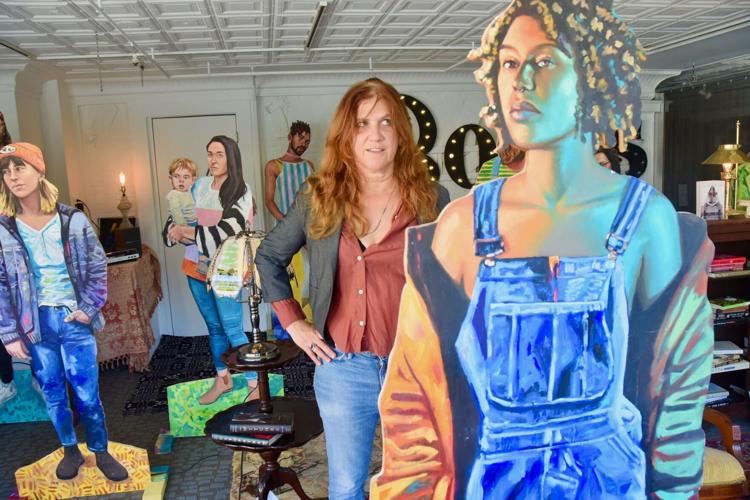 Left: Local filmmaker Stacy Cochran surveys her creation of a pop-up bookshop on Spring Street in Williamstown on Tuesday.

Below: Life-size paintings by Danielle Klebes are on display throughout the pop-up store. 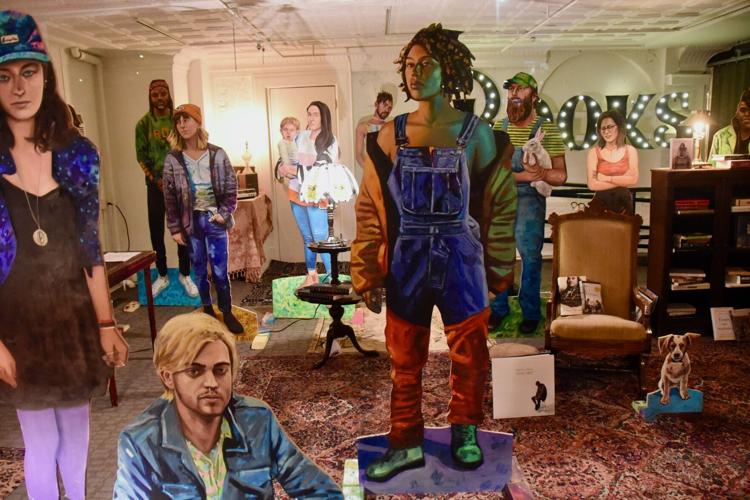 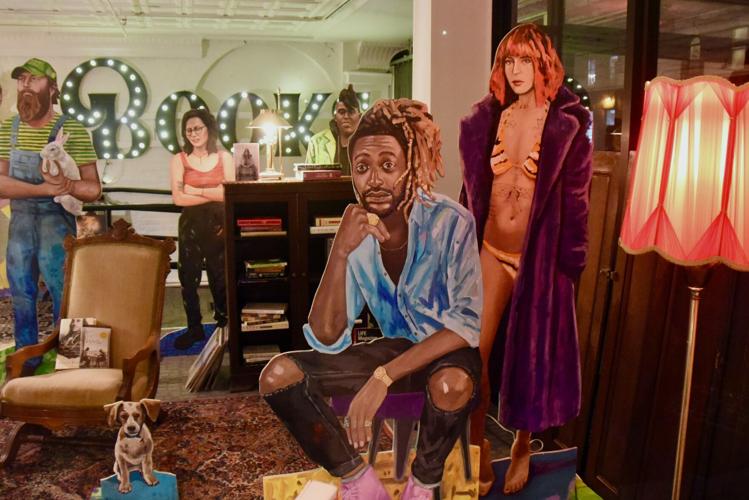 Left: Local filmmaker Stacy Cochran surveys her creation of a pop-up bookshop on Spring Street in Williamstown on Tuesday.

Below: Life-size paintings by Danielle Klebes are on display throughout the pop-up store.

WILLIAMSTOWN — There is a new art installation in town, and it’s disguised as a functioning pop-up bookshop.

She noticed the empty space that once housed a Clark Art gift shop in the lobby of Images Cinema at 50 Spring St., and it sent her mind spinning back in time to a Christmas season from decades past when peering into a department store window at the holiday displays always sparked the imagination.

“As a filmmaker, it appealed to me,” she said. “And once I got the idea in my head, there was no stopping me.”

So, she approached the idea like a filmmaker would, figuring out the scene, finding contributing artists to create the set pieces and providing the content.

Cochran rented the space from Images — it has been closed down during the coronavirus pandemic — for November and December, contacted local artist Danielle Klebes to paint the life-size characters, and consulted with local chef and artist Aaron Oster, co-owner of A-OK Berkshire Barbeque, to add some graphics and lighting. And local antiques dealer and former educator James Montepare lent her some of the needed furniture, such as end tables and bookshelves.

And she wanted to involve books, the finishing touch to an installation that she hoped would trigger the imagination and encourage people to dive into a good book.

Cochran also wanted to encourage local shopping and independent booksellers, so she partnered with the storied Northshire Bookstore in Manchester, Vt., a store that has more than a few regular customers in Williamstown.

“She’s done an amazing job,” said Chris Morrow, co-owner of Northshire Bookstore. “It’s a hybrid idea, an excellent use of the space and very much appreciated by us.”

The “Pick-Up Pop-Up Bookshop” opened Nov. 2. Well, sort of. Customers order what they want and pay at the online Northshire Bookstore. If they order by Tuesday, the merchandise is delivered from Manchester in time to be picked up at the Spring Street store during open hours Friday through Sunday from 11 a.m. to 3 p.m.

Since all the orders already are paid for, no money changes hands. And the customers can’t go any further than the doorway, where they pick up their order.

But, inside, where nobody goes, is where the most activity can be seen.

About a dozen life-size characters in various action poses — they were created by Klebes — populate the space. The giant wooden letters created by Oster, lined with tiny lights, spells out the word “Books” on the back wall. And as a merchandise display, Cochran brought in a bunch of her favorite books to line the shop’s shelving. Some of the other books that can be seen through the window are by local authors.

“Stacy really made this possible with her energy and vision,” Morrow said. “It will certainly help in a number of ways, and she deserves all the credit.”

“I wanted this to benefit as many people as possible,” Cochran said, mentioning local artists, local readers, Images Cinema and Northshire Bookstore. “And I wanted to pull people into something that’s a little bit transporting. It’s about having something you want to say about the real world, and that’s what this little room felt like to me.”

A turntable and two small speakers fill up the silence. On Tuesday, “The Wild, The Innocent, And The E Street Shuffle” by Bruce Springsteen and The E Street Band was ready to go.

But, here’s the really artistic part — Cochran doesn’t make any money from this effort. She is, in fact, investing money in a business that makes no money. The payments go directly to Northshire Bookstore.

“I am not a transactional person,” she said. “I don’t want anything back from this, I just want to do it.”

Scott Stafford can be reached at sstafford@berkshireeagle.com