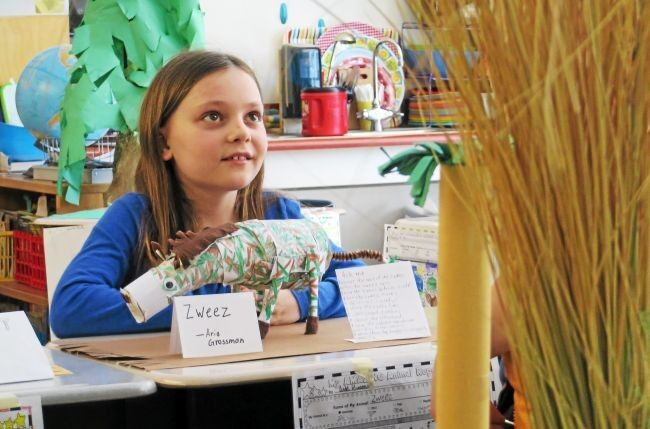 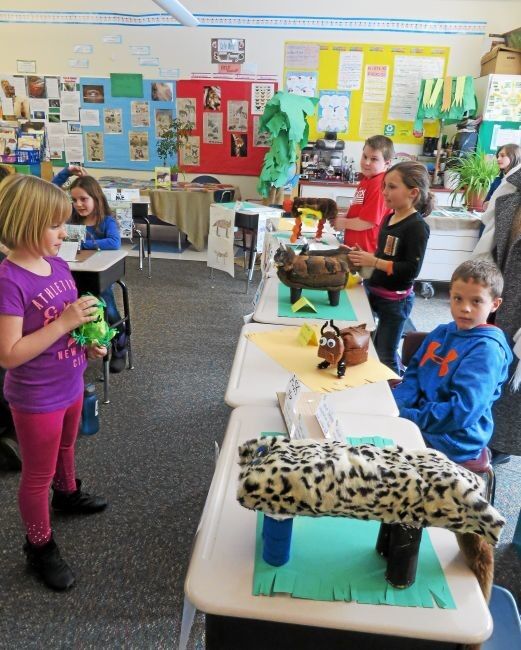 GREAT BARRINGTON >> The second floor of Muddy Brook Elementary School has been teeming with dolphish and porkybats and wombeests.

Never heard of them? That's because they're the creations of fourth-grade students who, along with their teachers, embarked on a new multi-disciplinary curriculum covering biomes.

By Encyclopaedia Britannica definition, a biome is a large region of Earth that has a certain climate and certain types of living things. Since December, the Muddy Brook students have been studying the major biomes, including tundras, oceans, grasslands, rainforests, deciduous forests and deserts.

The plants and animals of each biome have adapted traits that help them to survive in their particular biome, such as fur for warmth, fins for swimming, or bioluminescence for navigating dark environments.

"This was going to be a synthesis of what they learned," said fourth-grade teacher Susan Ebitz, of Friday's "Amazing Adapted Animals" showcase, a culminating project for the biomes unit.

"This has been so much better than a pencil and paper test," she said.

"[The students] have been using their engineering and design skills to create their own original animals complete with adaptations that fit their world biome of choice," teacher Kerry Manzolini explained.

For the showcase, six classrooms were transformed into the six biomes of study, giving some students the chance to experience being in a setting outside of their homeroom of study.

Each student, around 90 in total, created an original animal hybrid, made posters, fact sheets and presentations about their critter. They also constructed a model creature using mostly recycled materials, like plastic bottles and paper cups, decorated with paints, tapes, faux furs and feathers.

For example, the dolphish are oceanic dolphin-jellyfish hybrids, with fish-like bodies and jellyfish tentacles. The porkybat is a rounded bat-like creature outfitted with porcupine quills that flies through deciduous forests. And the grassland-dwelling wombeast has traits of a wombat and wildebeast.

Fourth-grade teacher John Broderick said the students excitedly embraced the assignment. "They all love animals, which made it a win from the start," he said.

His colleague, Bonnie Groeber, said her students were meticulous about creating realistic species. "Animals that can't adapt to a certain environment will die. They did so much work, they were invested in making their creatures live," she said.

"I really like inventing things," said fourth-grader Aria Grossman. Her zebra-like "Zweez" has a coat of brown and green swatches, making it more camouflaged while grazing the grassland it inhabits.

"Tapping into the imagination to problem-solve is what we were really going for," Manzolini said.

Marti Cunningham, who developed the deciduous forest's "Squeer," a cross between a squirrel and deer, said she thought the project was a good assignment for her age group. "It has the challenge that we need because we have the knowledge to do it well," she said.