The region is mourning the loss of a passionate youth advocate who fostered community through art, connection and collection.

Paula R. Buxbaum, 58, of North Adams, died after a crash on State Route 295 in Canaan, N.Y., early Friday morning. Buxbaum was remembered Saturday as a creative, warmhearted community touchstone who devoted much of her life to supporting youths through various initiatives.

With more than three decades of experience in program management and youth services, Buxbaum spent eight years with a program that worked with homeless children in Los Angeles, where she brought educational services to youths in shelter settings.

She moved back to her home state of Massachusetts with her husband, Douglas Jones, who serves as executive director of Images Cinema in Williamstown.

Upon her return to the Bay State, Buxbaum served as the director of the Juvenile Court’s Court Appointed Special Advocate program, administered through 18 Degrees, where she expanded the program fivefold, growing it to include about 100 volunteers, said Erin Sullivan, the agency’s vice president of community and donor relations.

Sullivan said Buxbaum was “smart, funny, diligent, committed and had a huge heart. She was an advocate for children and families who were struggling. Paula truly believed in the power of volunteers to change and support communities.”

“We are devastated by this loss,” Sullivan added, “and our hearts go out to her family, whom she loved dearly.”

Amy Guachione was one of Buxbaum’s first recruits to volunteer for the program and later succeeded her as coordinator. She said Buxbaum “made everyone feel welcome and a part of the agency as soon as they walked in the door.”

In 2019, Buxbaum was appointed executive director of the ROOTS Northern Berkshire Teen Center in North Adams, a community center for area youths. Members of the board said Buxbaum shepherded the center through the coronavirus pandemic, pivoting its offerings into the virtual realm, where she was able to foster community through online and outdoor events.

“She really stayed dedicated to serving young people, in whatever ways possible, which we’re really grateful for,” said Ellen Janis, president of the board of ROOTS. “She was very creative; that was one of her real strengths and gifts.”

Former board member Randal Fippinger said Buxbaum was down to earth, yet nonetheless a force to be reckoned with. He said Buxbaum made indelible and positive impressions on area youths, and excelled in her role as executive director of the center.

“As young people, they were really impacted by Paula’s leadership and guidance at Roots, and as a board member, I found her to be an awesome executive director. I really enjoyed working with her,” he said.

Buxbaum also was savvy in matters of business, according to Fippinger. After departing the teen center in March, she launched a pop-up vintage shop, which had found a permanent home on Spring Street in Williamstown.

On Saturday, a memorial appeared in front of the door to her shop, Bux Vintage, where candles and flowers, along with a sign the read, “In Loving Memory of Paula Buxbaum,” graced the entryway.

Another preexisting sign had alerted patrons that Buxbaum’s store was closed Thursday, because the shop steward had plans to see musician Lucy Dacus perform in Brooklyn, N.Y. The crash that claimed Buxbaum’s life occurred on State Route 295 in Canaan. State police said Jones and a 17-year-old also were hurt in the crash.

Buxbaum told the Williams Record in May that her shop provided the opportunity for her to share her passion for collecting vintage clothing, wares and music with the community.

“In terms of actually collecting things, I think it’s just an interest I’ve had for most of my life,” she told The Record. “[My shop] has sort of allowed me to finally move things along and see other people enjoy them instead of gathering dust in my home.”

But, it was much more than a commercial venture — Bux Vintage was something of a community center in its own right. The space bucked the “WASPy atmosphere” of Williamstown, several local youths told The Eagle in a statement, and quickly became a place where young people could share art and fashion, and let their personalities shine without fear of backlash or ridicule. 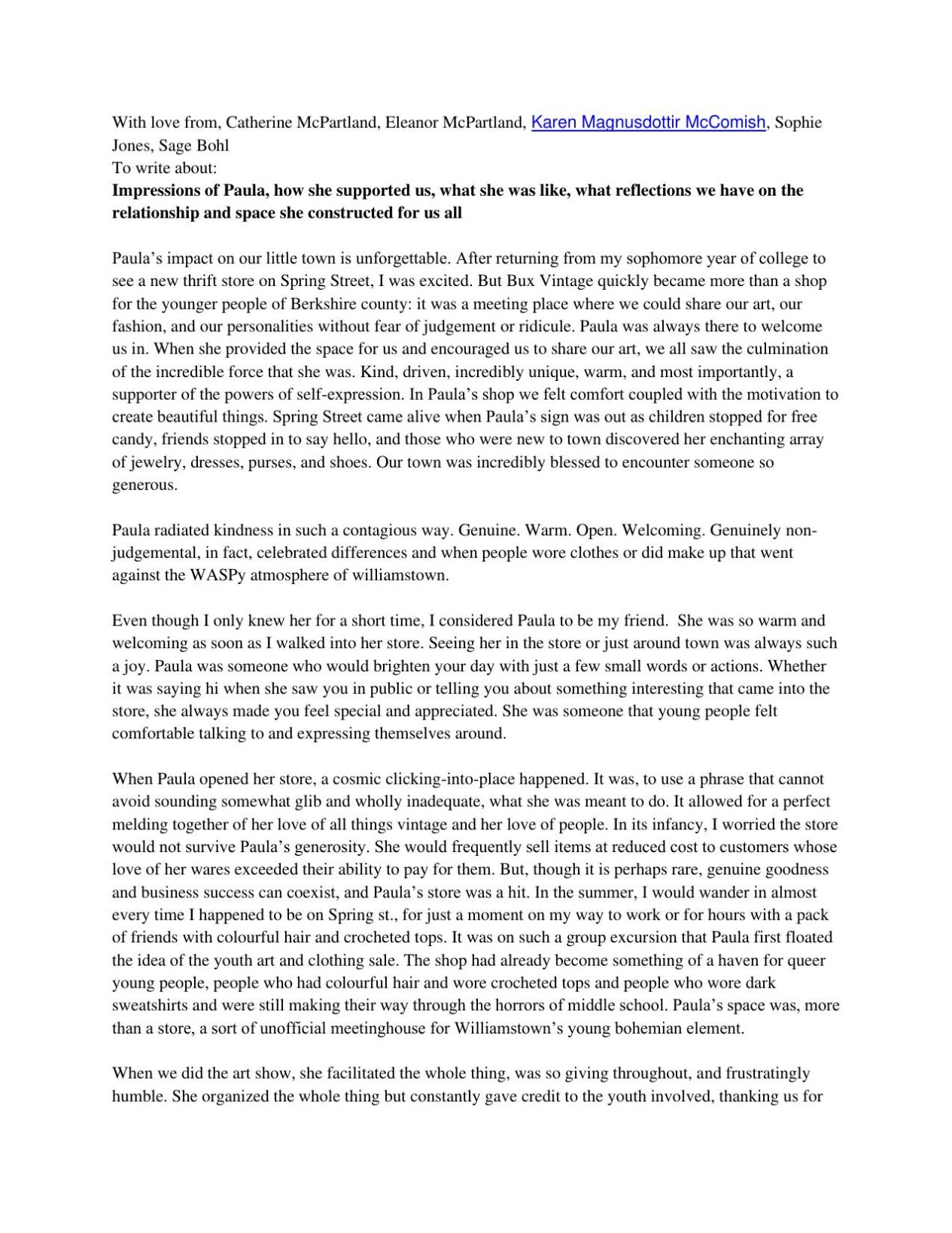 In August, Buxbaum hosted an art show that gave youths a forum to sell their work while also raising money for the Elizabeth Freeman Center, an organization she passionately supported, according to The Record.

Karen Magnusdottir McComish, who participated in the show, provided The Eagle with a statement about the impact Buxbaum had on the community that was written in concert with Catherine McPartland, Eleanor McPartland, Sophie Jones and Sage Bohl.

Buxbaum, they said, was generous, often selling “items for reduced cost to customers whose love of her wares exceeded their ability to pay for them.” She possessed an uncanny knack for making those who entered feel “special, talented, valued, and loved,” they wrote.

{p dir=”ltr”}”The shop had already become something of a haven for queer young people, people who had coloured hair and wore crocheted tops and people who wore dark sweatshirts and were still making their way through the horrors of middle school,” the statement said. “Paula’s space was, more than a store, a sort of unofficial meetinghouse for Williamstown’s young bohemian element.”

On McPartland, Buxbaum made an indelible impression.

“I feel that she has shaped my personality and worldview in ways I can’t fully comprehend,” she said.

Amanda Burke can be reached at aburke@berkshireeagle.com or