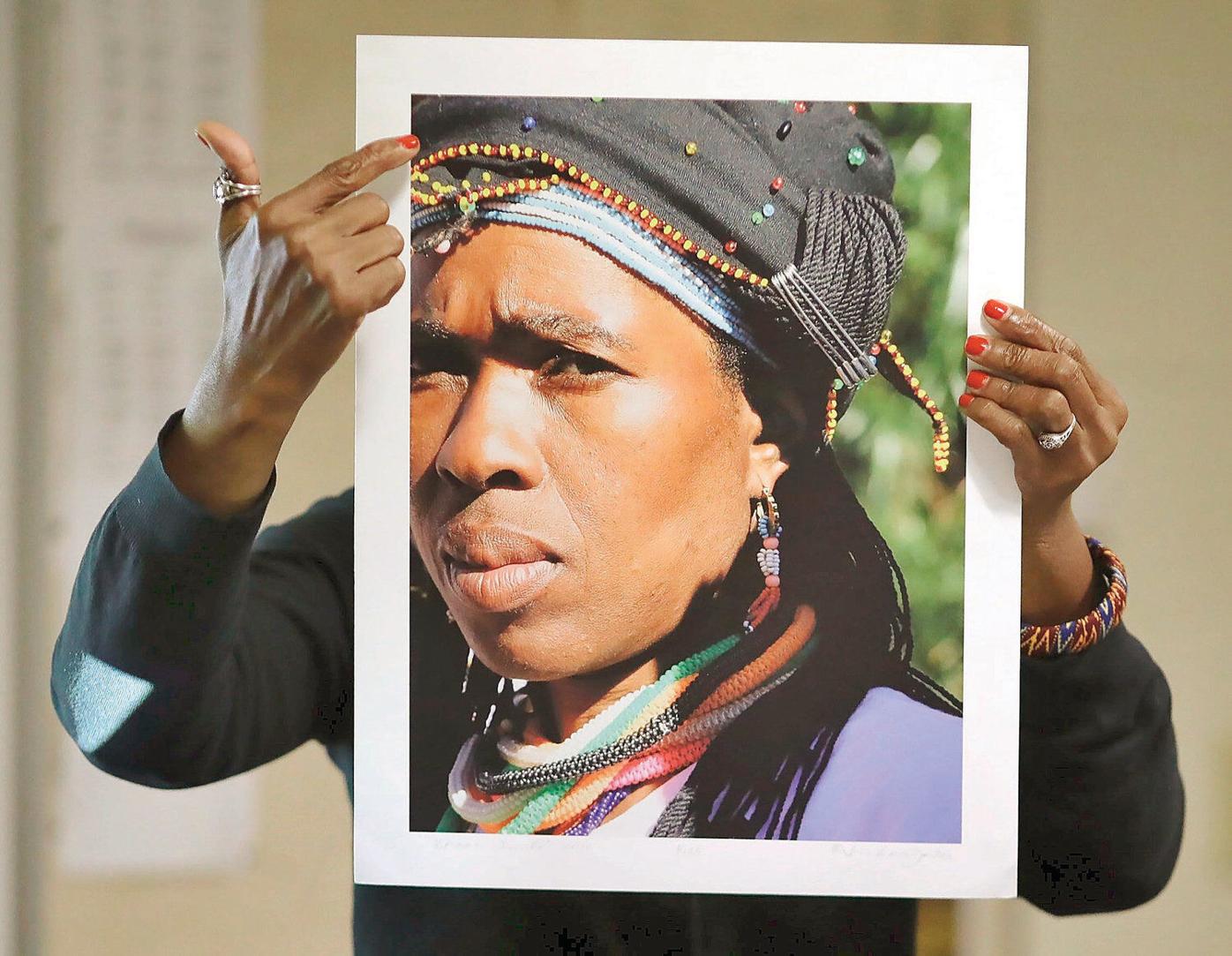 Visual artist Iris Dawn Parker visits with the eighth-graders of Reid Middle School's Justice League and shows them a photograph that she took of a Xhosa woman in South Africa. 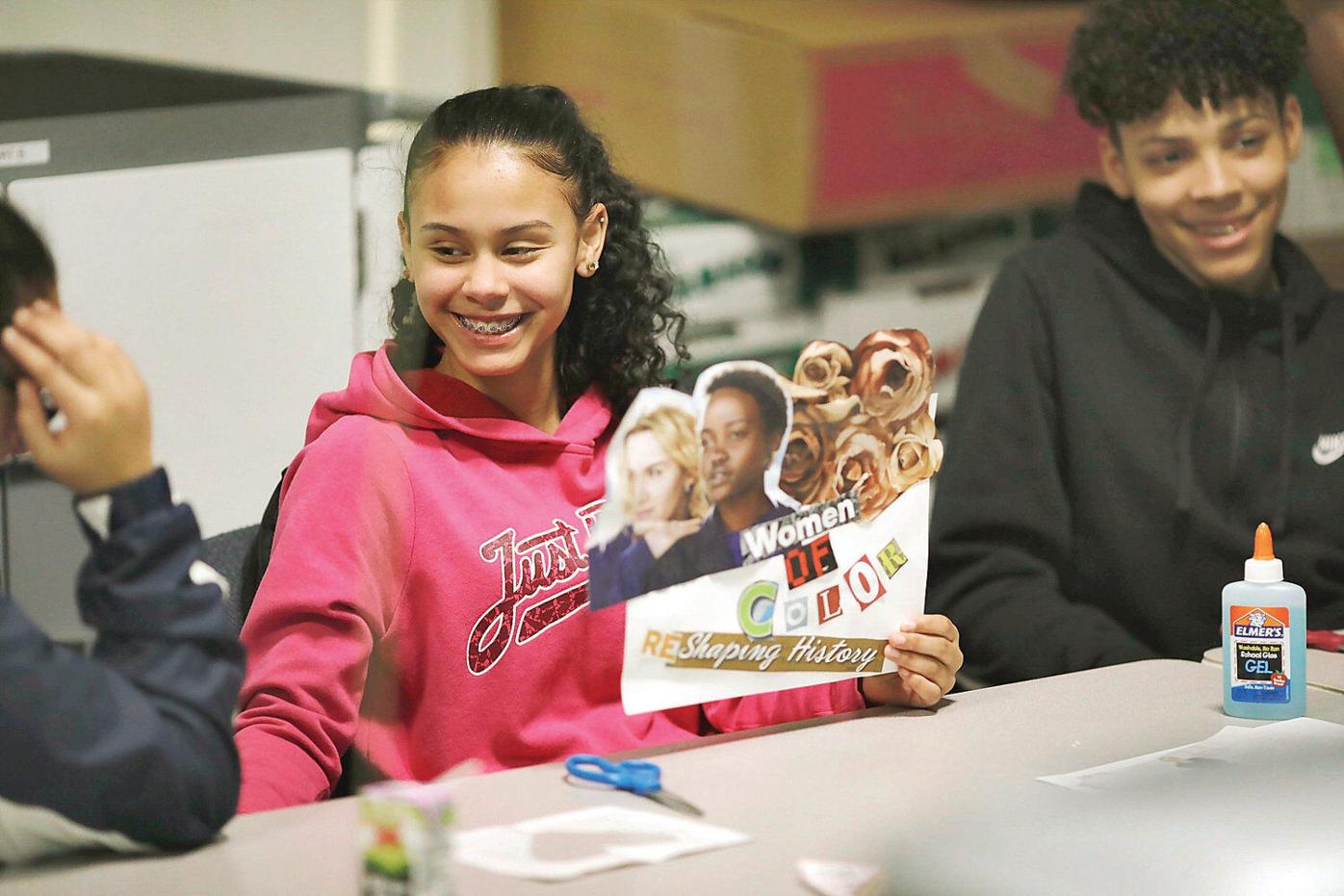 Gracie Friend shows her fellow eighth-graders a collage that she made during an exercise using art to impact social justice at a meeting of Reid Middle School's Justice League. 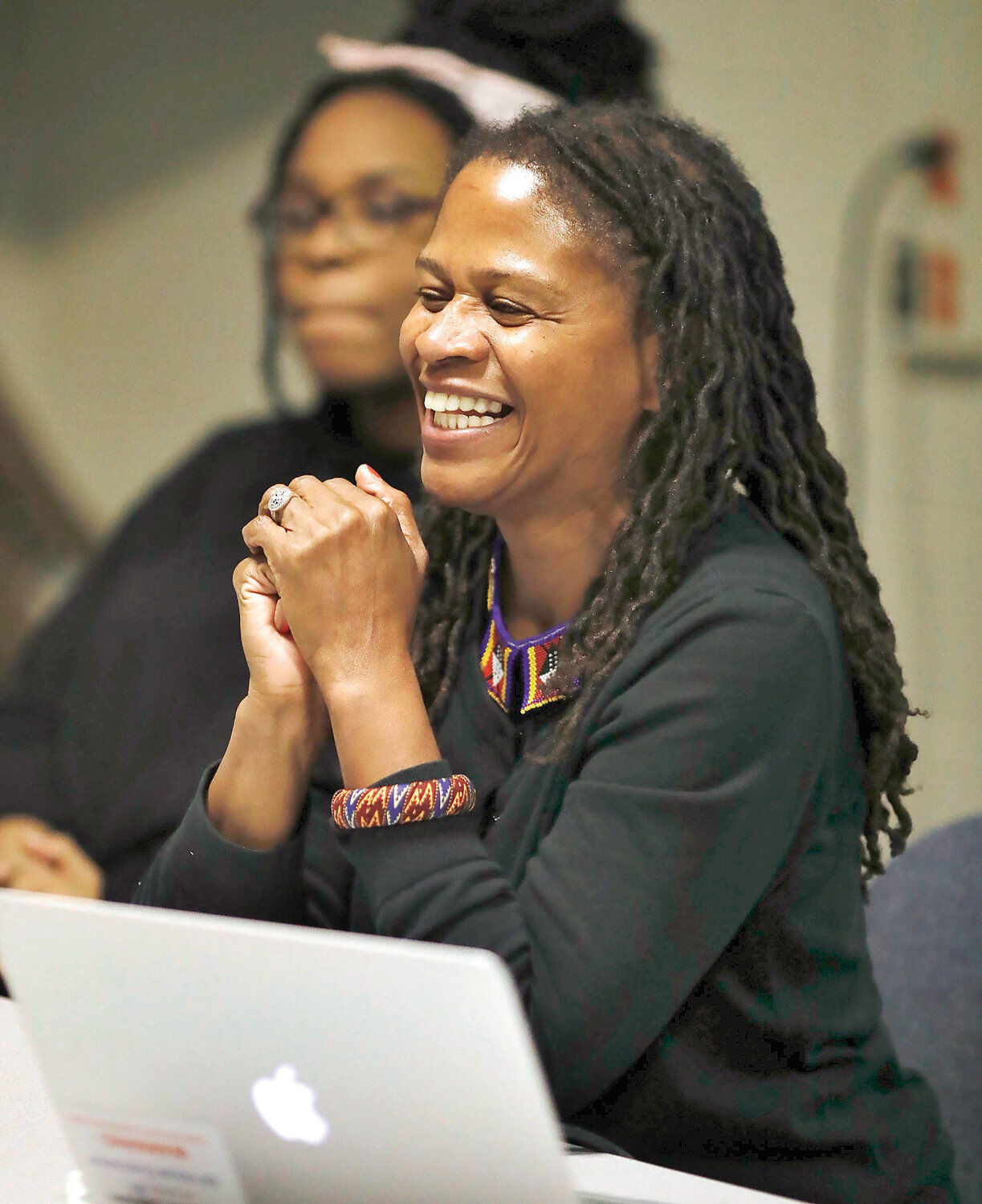 Visual artist Iris Dawn Parker visits with the eighth-graders of Reid Middle School's Justice League and shows them a photograph that she took of a Xhosa woman in South Africa.

Gracie Friend shows her fellow eighth-graders a collage that she made during an exercise using art to impact social justice at a meeting of Reid Middle School's Justice League.

PITTSFIELD — Eight excitable eighth-graders sat around a table, tucked within the belly of the library at Reid Middle School.

On the projector, they saw photos of post-apartheid South Africa. The images belonged to Iris Dawn Parker, a South Africa-based visual artist visiting the area who stopped in to talk to students.

She held up a photo of a township in South Africa and spoke of the poverty that exists in townships versus nearby wealthy communities.

"It's the same disparity we have here," she told them.

"I come from poverty," one student chimed in.

Kristen Shepardson, Reid's guidance counselor, said that three years ago students from Williams College launched the program, called Justice League, that brings students together once a week after school.

There, they hang out and talk about social justice from 2:30 to 4:30 p.m. They have a snack, and they meet in small groups with their mentors from Williams. Sometimes they go places together on the weekends, and last summer, they helped run a basketball tournament to raise funds for a local student headed to Howard University.

"It's just all about support rather than discipline," said Tricia Desouza, one of the mentors from Williams.

Justice League also offers students a space to be authentic and curious.

In the classroom with Parker, one student's attention kept going instead to her hair, which was twisted into tight chin-length locks. He was curious about how she got them so tight.

He could easily have them, too, Parker told him.

"Twist those up and don't do anything to it for a week and it'll lock up on its own," she said. "You have African hair."

Organizers said the idea behind the program is to reach students who are more likely to get punished in school, meet them where they are and make space for them to connect with mentors, guests and with one another.

"We're trying to primarily confront the fact that kids are getting targeted in schools," Desouza said.

Shepardson said she chose kids for the program who she felt were "on the fence."

"The students I selected were students I saw potential in," she said. Many of them have the skills to be leaders, she said, but they need a push in the right direction, support and encouragement.

"I saw the potential in them in moving toward a positive future if they just had a little bit of adult connection," Shepardson said.

Steve Patch, an eighth-grader who's been in the program for two years, said he feels like time spent with the Justice League is time well spent. He said the staff and mentors are easy to get along with.

"We're also doing it for a good cause," he said, noting how the students work with mentors to break down racial barriers.

Plus, he said, they get to go on field trips to Williams College.

"It's been a good opportunity for me and for all my friends that are in the group," he said.

Gracie Friend, another eighth-grader who's been with the program for two years, said the mentors have taught her never to give up.

"They keep me going," she said. "They inspire me to do better things."