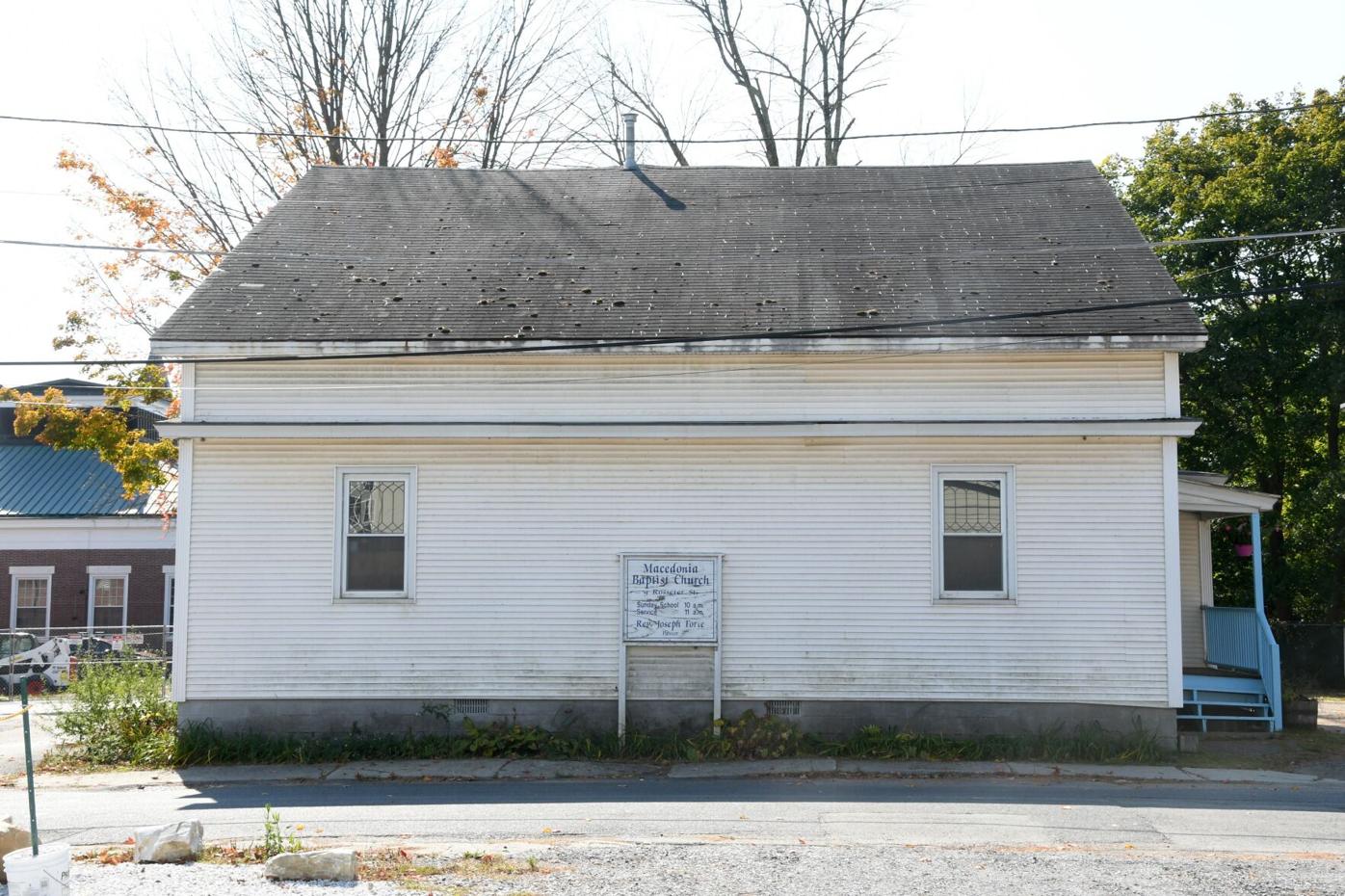 The Macedonia Baptist Church on Rosseter Street in Great Barrington was recently vandalized. Its pastor, the Rev. Joallen Forte, is questioning the initial response by town police to the incident. 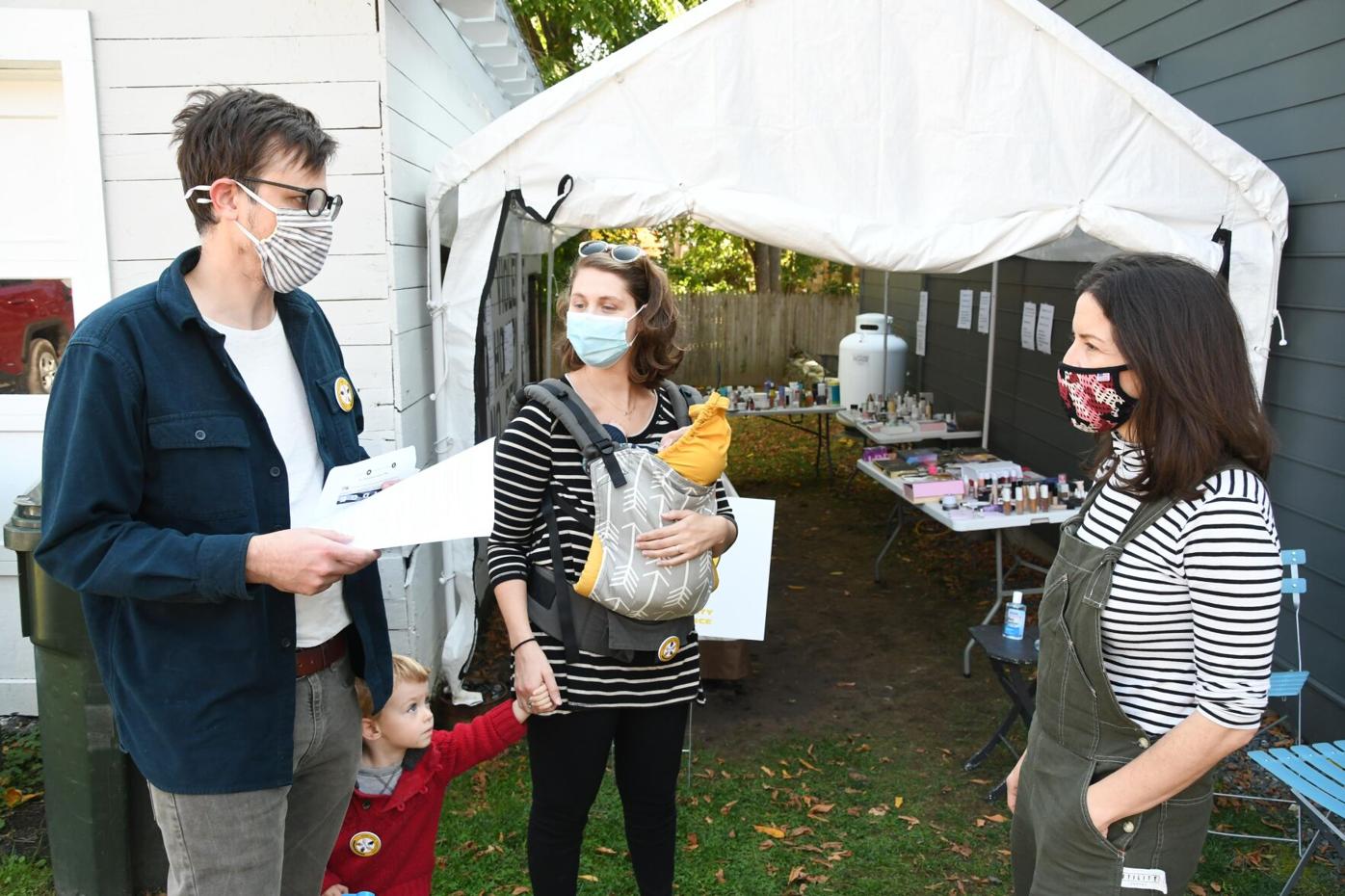 Great Barrington residents Tim Ellis, his wife Lily and children Levi, 2, and Nick, 2 months, speak to Heather McHatton on Oct. 10 at Mulberry Hair Company in Great Barrington about the to members of the community about the All Hands in Pledge calling on people to decry hate. 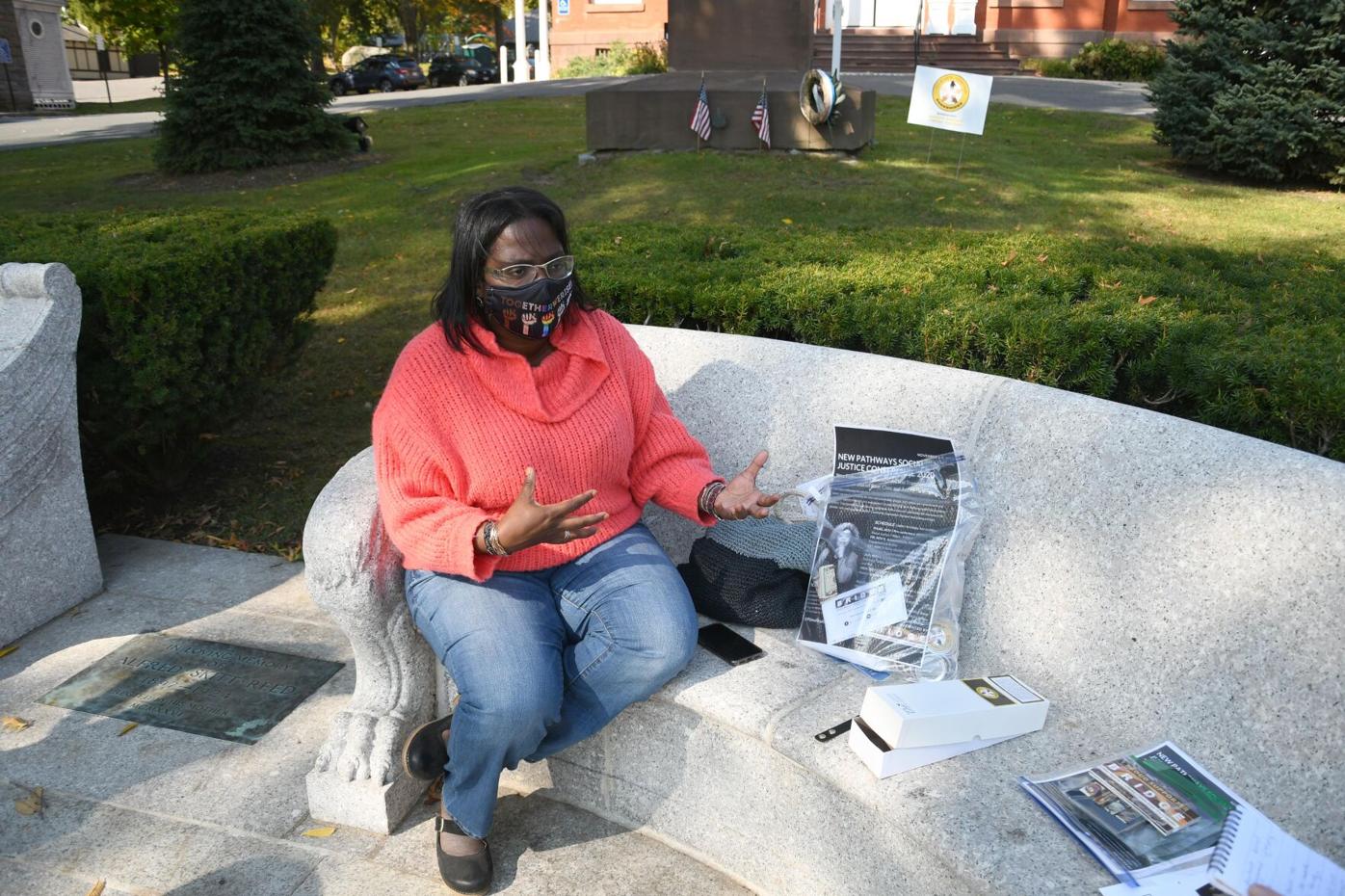 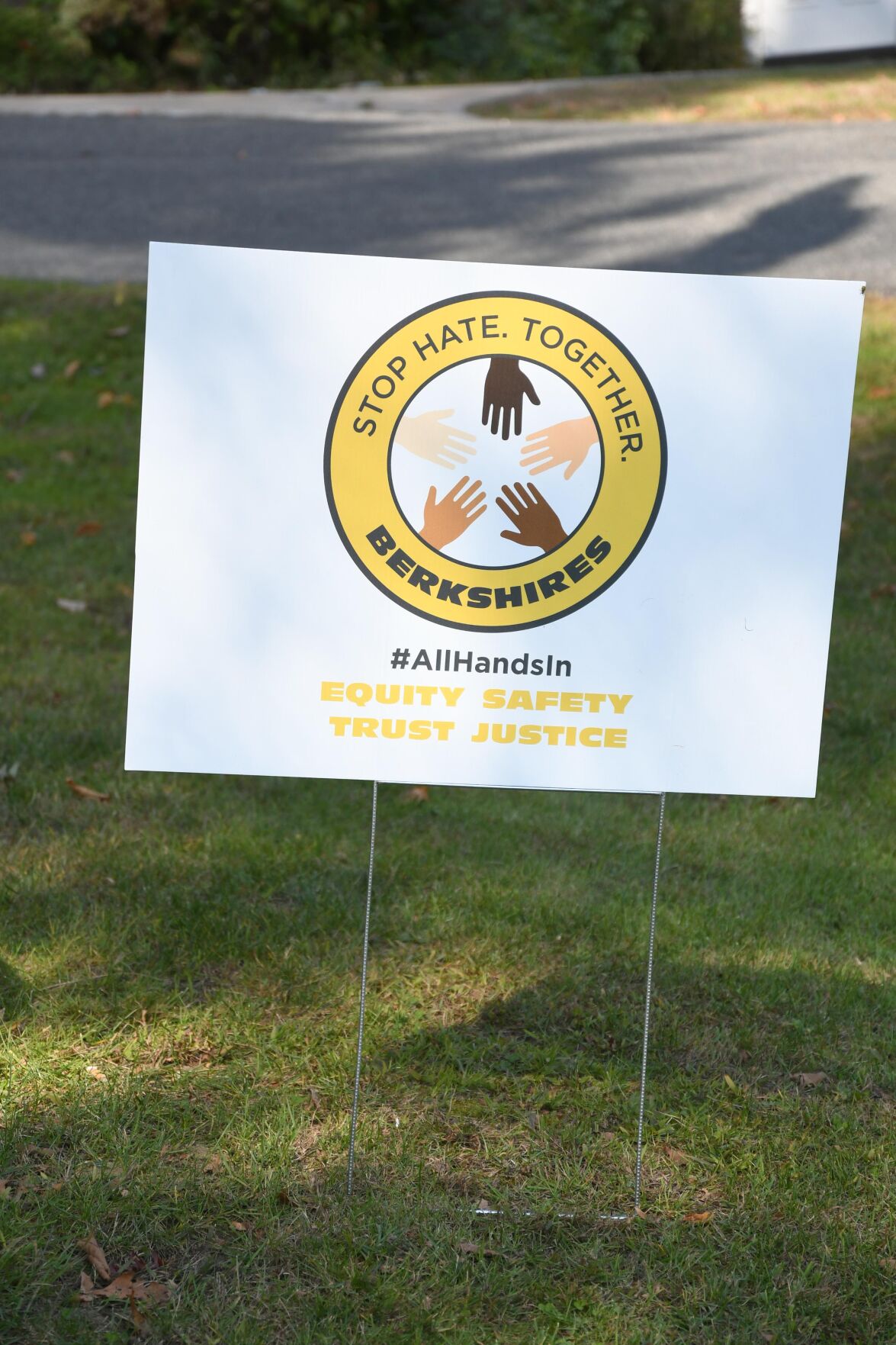 A lawn sign in front the Great Barrington Town Hall on Oct. 10 calls on people to decry hate.

The Macedonia Baptist Church on Rosseter Street in Great Barrington was recently vandalized. Its pastor, the Rev. Joallen Forte, is questioning the initial response by town police to the incident.

Great Barrington residents Tim Ellis, his wife Lily and children Levi, 2, and Nick, 2 months, speak to Heather McHatton on Oct. 10 at Mulberry Hair Company in Great Barrington about the to members of the community about the All Hands in Pledge calling on people to decry hate.

A lawn sign in front the Great Barrington Town Hall on Oct. 10 calls on people to decry hate.

GREAT BARRINGTON — After anti-Semitic graffiti was scrawled on the side of the historically Black Macedonia Baptist Church, the Rev. Joallen Forte is speaking out about the impact of the incident and its early handling by local police.

Over the years, the church on Rosseter Street had been marked up with graffiti not once but twice before late last month, when the person who cleans the church discovered the epithet. Great Barrington police are investigating the incident as a hate crime. No suspect has been identified.

“This time was a significant one,” said Forte about the slur she and her members cleaned off of their church siding. “Someone felt bold enough, and free enough, to write those words.”

Before she and others rid their church wall of the graffiti, Forte called Great Barrington police to make a report after service let out Sunday, Sept. 27. She said she was asked a few questions over the phone then told that officers were handling other things, and would respond to the church when available.

"Someone felt bold enough, and free enough, to write those words.”

A white member of the Macedonia church disapproved of what police had told Forte over the phone, and so she drove to the police station herself and returned with two officers, according to Forte.

“It wasn’t until somebody Caucasian went over and got them,” she said.

Police say officers responded to the church 14 minutes after Forte called. Forte said she explained that the house of worship had been tagged before.

According to the reverend, an officer mentioned how someone had written the same slur on the side of the post office, an incident she later learned took place in 2018.

Forte was left with the impression that the officer did not want to engage with the fact that in this case, the perpetrator had targeted a Black church. She said the officers displayed a “nonchalant attitude” and, according to Forte, one told her, “Don’t make it big.” That prompted Forte to ask him to clarify what he meant.

The officers agreed, according to Forte, that going “big” would give the attention the vandal sought in the first place.

She felt the pair was insensitive and had downplayed the severity of the incident. She said she respects local police, but felt that downplaying the graffiti would only serve to embolden individuals to commit acts of hate in the future, which she now expects.

She said she was also troubled by how no one from the local media contacted her — the leader of Macedonia Baptist Church — immediately after the incident.

Forte said she told Walsh at her church that they were dealing with a hate crime. “We had to tell them, this is a hate crime,” she said.

Walsh did not respond to interview requests last week. In a statement, he defended the department’s handling of the initial response. He wrote that when Forte called police to report the graffiti, “both of our two cruisers were tied up on three calls, an alarm call, an accident and a disturbance call.” He said the first unit responded to the church 14 minutes after the call came in, and that, “the lady who came to the PD was politely told the same thing” that the dispatch officer initially told Forte over the phone.

“This is why there was some delay. The insinuation that it was for some other reason is uncalled for, false, and disrespectful to our officers,” he wrote. He said the slur being written on the post office was brought up in acknowledgement that “sometimes we see copycat incidents and that was the intent of their other statements.”

He wrote that the “incident involves many religious, race and other issues” and described it as “a deplorable hate crime done to the wonderful church members and our community and we have taken the matter very seriously since the day it happened.”

“The officers also knew they were dealing with a hate crime from the start,” he added.

VanSant said after her outreach to the town, officials contacted National Grid, which in turn installed a street light to illuminate the church at night as a deterrent to vandalism. Forte said it was the first time Rosseter Street had a working street light in years.

Walsh, in a prepared statement, said the street light was one of two “rare steps” it took in response to the graffiti, along with offering a reward for information that leads to identifying the culprit.

VanSant said she convened a call with church and town leadership the following week, as well as with representatives from the Berkshire District Attorney’s office, the U.S. Attorney’s Office and representatives from the Federal Bureau of Investigations. Walsh wrote that the call “was not to review our work, but for those agencies to discuss in general how these incidents are handled.”

An outcome of the call, said VanSant, was the sharing of resources including information about how to protect houses of worship from being targeted.

The timing of the hate crime in late September, on only the second week that Macedonia church held in-person services after a pandemic-induced hiatus, suggests the perpetrator aimed to chill participation at the church, whose congregation she said is thriving right now, said Forte.

“This graffiti wasn’t put on there during the pandemic, it was put there when the doors were open,” said Forte. “To me that was a clear message of, ‘Shut the doors.’ ”

It also happened in the wake of the pain that rippled across the county when the public learned that no police officers would be criminally charged for shooting and killing Breonna Taylor in her apartment in Louisville, Kentucky, last spring. Forte and her sister, Vanessa Le Grande, are two children of the late Rev. Joseph S. Forte, a tall, gentle man who was quick to joke and ministered for about four decades at the church on Rosseter Street, said Le Grande.

In response to the graffiti and an earlier incident, Multicultural Bridge organized a community outreach event earlier this month.

On that weekend autumn morning, traffic crawled on Main Street, and VanSant sat outside Town Hall, where volunteers had gathered earlier that day for a training, then went their separate ways to talk to members of the community about the All Hands in Pledge — which calls on the public “not to stay silent in the face of intolerance or hate based on race, religion, sexual orientation, gender identity, ethnicity, country of origin, ability or any other factor.”

“This is the community swell of acknowledging [that] this does happen here,” VanSant said. “I want people to understand that people don’t feel safe and it may seem like this beautiful, idyllic place, but people are really suffering.”

The board of Bridge issued a statement Oct. 8 condemning the hate crime, and calling on all residents to work toward making the community a place where Black people feel safe. The organization hit its fundraising mark to purchase floodlights to help illuminate Macedonia Church and is working to raise more money to buy a surveillance system for the institution.

For Macedonia Church member Reggie Leonard, the slur scrawled on his church was a reminder that the community is not free from bigotry. He said the time for change is now, and it starts by reaching young people.

“People need to understand, change has got to come,” he said. “We have to start where we always start, and that’s in the schools.”

Last week, Forte said that, given the atmosphere of society today, she can’t help but expect the community will be hit with another act of intolerance.

“It will happen again, and that’s just the time that we’re in right now,” she said.

On Sunday, the W.E.B. Du Bois Legacy Committee’s virtual event to honor the civil rights pioneer was “Zoom-bombed” by someone who interrupted the program and uttered an anti-Black epithet.