RICHMOND — After extensive discussions at several meetings, the town’s Budget Advisory Committee has signaled its support of the proposed 2021-22 budget for the Richmond Consolidated School.

The spending proposal requested for appropriations approval by town voters comes in at $3,970,000, a $332,000, or 9.1 percent, increase over the current budget at the school, which is prekindergarten through grade 8.

But, the majority of the increase comes from the state’s legally required costs for special education students. The state reimburses the town a year later for a portion of the 2021-22 $175,000 SPED cost and an additional $32,225 for SPED transportation.

The operating budget increase, not including special education, is up by 3.4 percent, close to the budget committee’s hoped-for target of a 3 percent hike.

“They’ve made a genuine effort to get us there, and I believe it was painful,” said Selectman Roger Manzolini. “But, I don’t think we should push further.” 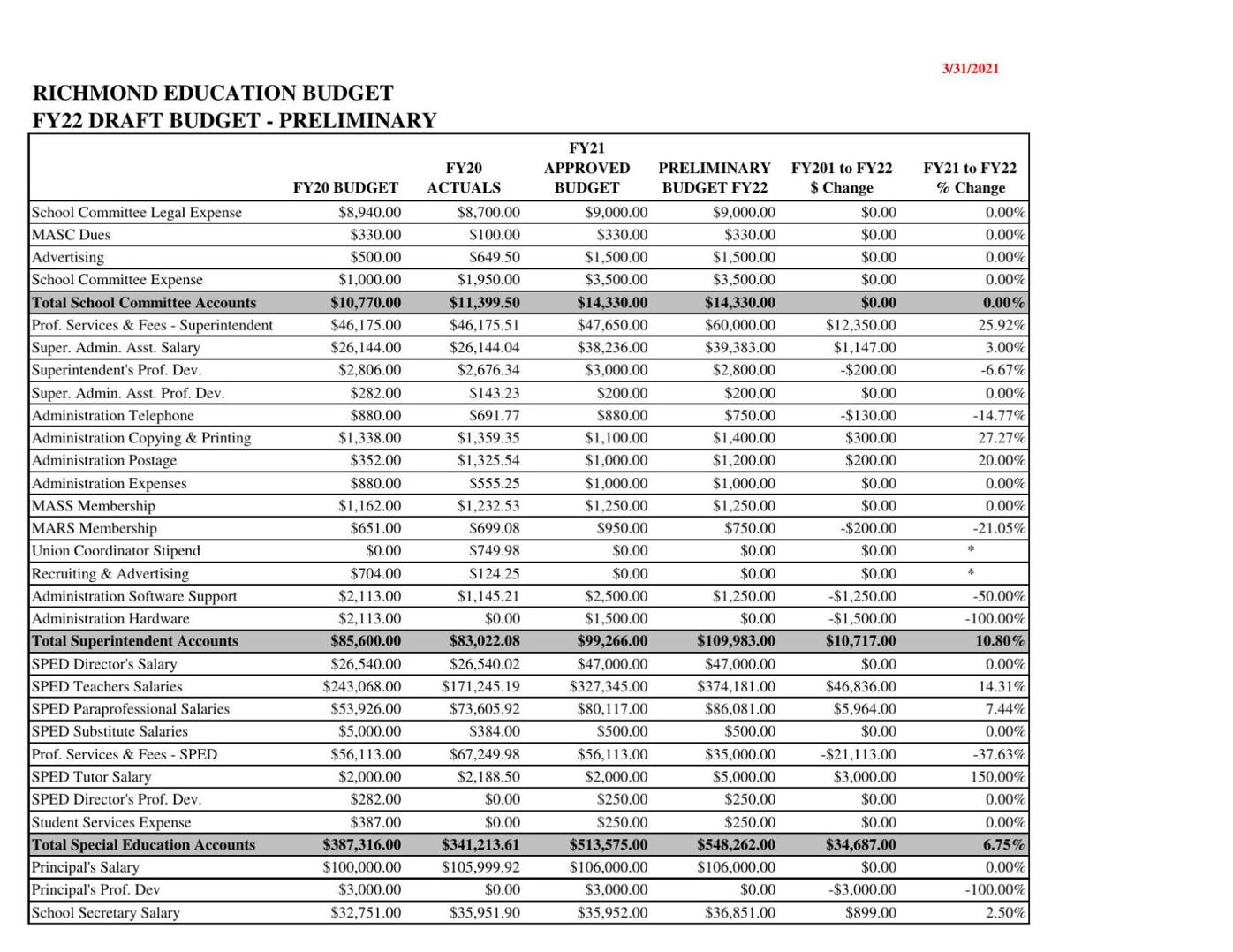 The town’s school operates under a shared superintendency contract with the Berkshire Hills Regional School District that extends through June 2024.

The Budget Advisory Committee includes the three Select Board members, as well as Finance Committee members.

“We worked hard to present a budget that continued to let us offer wonderful experiences and opportunities for students and was respectful to taxpayers,” Superintendent Peter Dillon told The Eagle. “I hope we found that balance.”

He also commended the town’s various boards and committees as “very thoughtful and deliberate in their approaches.”

A legally required public hearing on the school budget is set for 6 p.m. Monday, via Zoom. The draft budget is posted at richmondconsolidated.org.

Dillon, who has been sharing temporary principal duties at the school with Rob Putnam since the departure of Jill Pompi in January for a teaching post in Williamstown, announced his appointment of Stockbridge resident Daniel Weston as the new Richmond principal, effective May 3.

Weston, a teacher in the Southern Berkshire Regional School District for more than 20 years, has a bachelor’s degree in government from Skidmore College in Saratoga Springs, N.Y., and earned a master’s degree from Teachers College at Columbia University. He gained certification as a principal five years ago through the Reading Institute program in Williamstown.

“He’s a hardworking, serious and talented educator,” Dillon said at the budget committee meeting. “I think he’s going to be a high-quality, thoughtful leader.”

Dillon described a “very rigorous” search by a 19-member committee. Weston won unanimous support from the committee, which whittled a list of 17 candidates to a half-dozen finalists who were interviewed.

On Monday, most of the 152 enrolled students returned to five-day-a-week, in-building education at the Richmond school, though some families chose to keep their children in remote learning at home.

The enrollment reported to the state Oct. 1, 2019, was 171. The current decline is COVID-related, as some families chose full-time, in-person options such as St. Mary’s in Lee, School Committee Chairman Dewey Wyatt said.

During the pandemic, after a brief period of remote instruction, the Richmond school had offered in-person education four days a week, with Wednesdays designated as remote so the building could be cleaned thoroughly.

“There’s much more demand than we can accommodate,” he said.

Also during the March 31 meeting of the Budget Advisory Committee, Town Administrator Danielle Fillio reported that total town government spending, not including school costs, will rise by only 1.7 percent over the current fiscal year ending June 30.

“That’s a remarkably good figure,” said Selectman Neal Pilson. “I congratulate you on that.”

Finance Committee Chairman Robert Gniadek added, “I will second that.”

The in-person annual town meeting is set for 7:30 p.m. May 19, preceded by the informational “baby town meeting” at 10 a.m. May 8. Both meetings will be at Richmond Consolidated School.

The time of the annual town meeting and date for the "baby town meeting" have been amended.

Clarence Fanto can be reached at