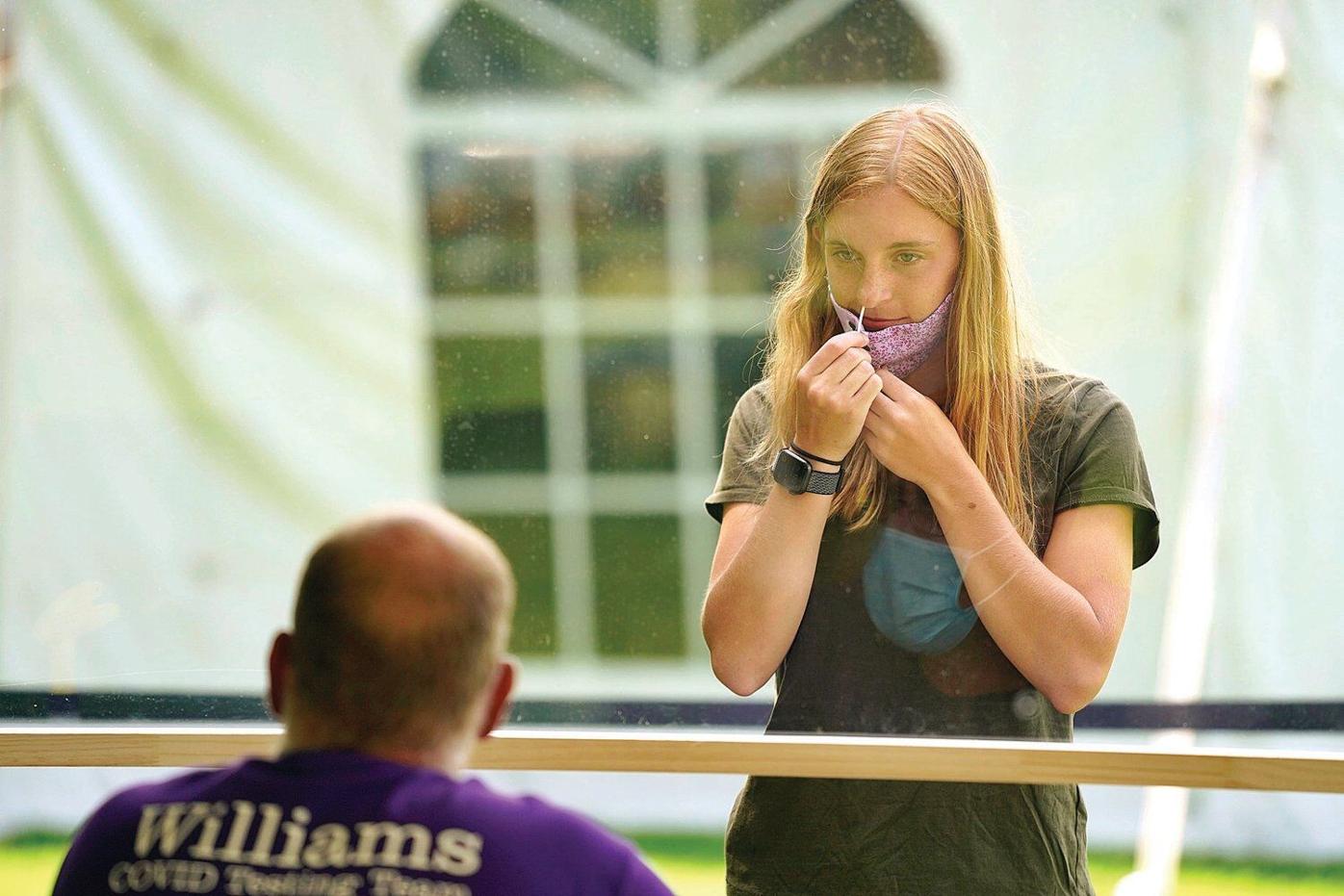 Williams College senior Sarah Tully swabs her nostril during a COVID-19 test before the start of the school year back in August. The college has seen only five positive cases since the semester began. 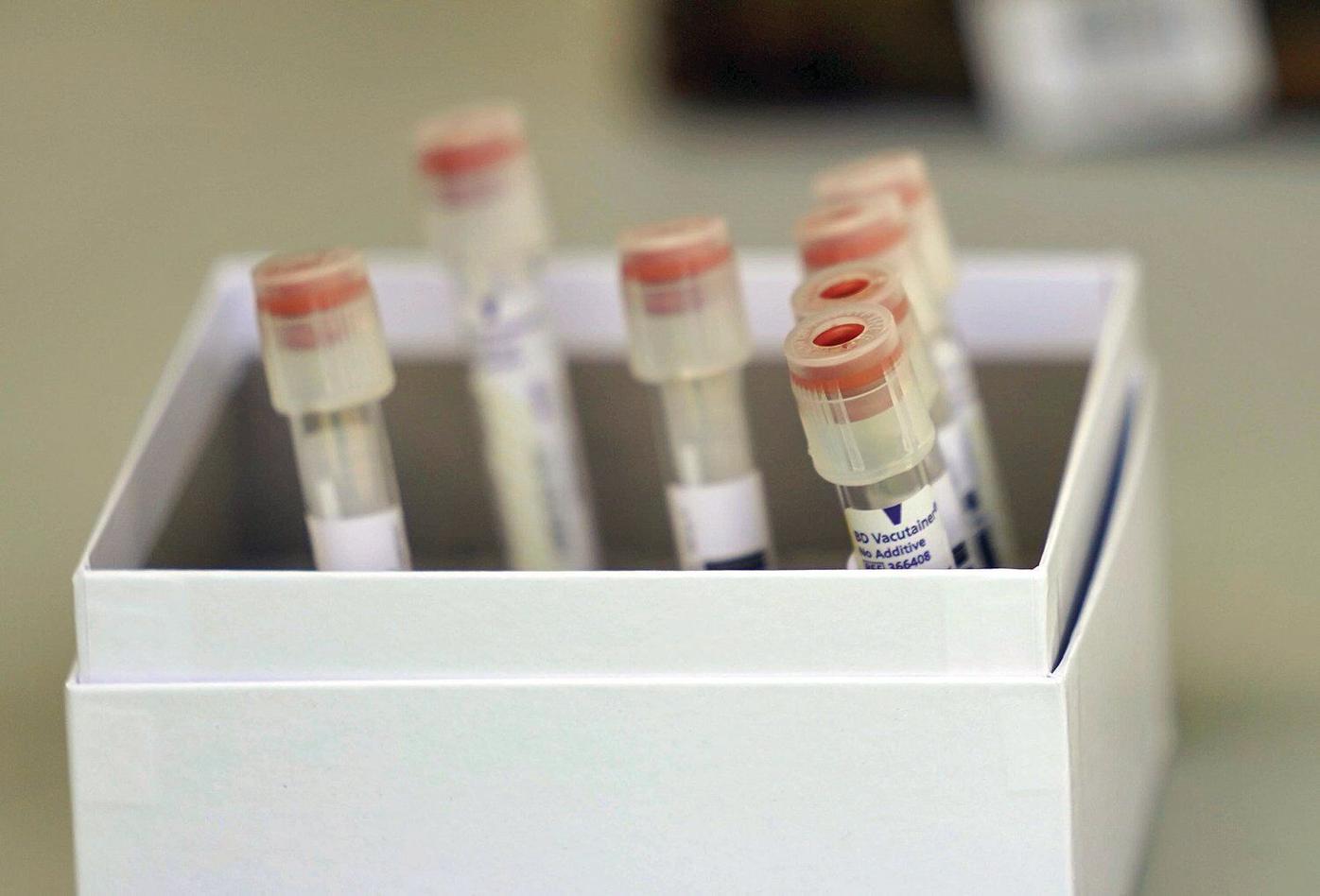 Williams College senior Sarah Tully swabs her nostril during a COVID-19 test before the start of the school year back in August. The college has seen only five positive cases since the semester began.

WILLIAMSTOWN — Williams College students have never taken so many tests. And they have never been so happy to see so many negative results.

Since returning to campus in August, students have been tested twice a week for COVID-19, and faculty and staff are tested once per week — that’s more than 3,000 weekly tests. So far, only five have come back positive.

Such a massive undertaking would not have been as successful without the rigorous testing schedule and the quick turnaround time for reporting results within 24 hours.

To accomplish testing on such a scale, the college turned to the Broad Institute at Massachusetts Institute of Technology and Harvard University, which has been providing the service to about 100 colleges in the Northeast, including Williams.

While the institute initially promised a response time of less than 48 hours, according to Rita Coppola-Wallace, director of planning, design and construction at Williams, it has cut that time in half.

“The basic consensus was that we couldn’t open the college without a robust testing program,” Coppola-Wallace said. “It was amazing. They beat what they told us they could do.”

According to Broad Institute spokesman David Cameron, in the past six months, the institute has processed 3.5 million tests for infection by COVID-19. Today it is processing 45,000 tests daily. Aside from 100 colleges, Broad also works with nursing homes, long-term care facilities and homeless shelters.

In mid-March, Broad converted part of a lab into a high-capacity COVID-19 testing facility, according to information provided by the institute. Over time, the team has steadily been increasing the pace and scale of testing, while also adapting new protocols to make tests easier to administer and process. As the number of tests performed increases, the cost-per-test can shrink.

If a Williams student receives a positive test result, noted Deborah Flynn, director of medical services at the college, they are placed in isolation housing, and their movements traced to find anyone they came into contact with.

When the college community started returning in August, they were allowed on campus in groups of 150 every two weeks. They were tested upon arrival, quarantined and tested again two weeks later.

Since then, students whose last name starts with A through L can show up to the covered parking garage on Mondays and Thursdays to get tested. The rest turn up on Tuesday and Friday. Anyone who forgets can come in on Wednesday, when about 200 more tests are conducted.

Even students living off campus are tested weekly. There are about 1,400 students enrolled this semester.

First, the students stop at the affectionately named nose-blowing station to clear their sinuses. Then they move on to the testing station, where they use a swab in the nose for a tissue sample, deposit it in the sanitary tube, and they’re done.

“It takes one or two minutes,” Coppola-Wallace said.

By contrast, the State University of New York at Oneonta, which did not require negative COVID-19 tests before students could return to campus, had to close down two weeks after opening when more than 700 students became infected. Since then the school has gone to total remote learning, and the president has resigned her post.

Massachusetts College of Liberal Arts has followed a similar, though less aggressive, testing regimen. All students were tested on arrival, and have been getting tested once a week.

The pandemic caused MCLA to change its traditional living arrangements as well: This year, all residential students will live in single rooms. Those who live in rooms that traditionally housed roommates will have more space. Also, each residence hall is equipped with 20 “isolation rooms” where students can go if they test positive for COVID.

MCLA has reported only three positive cases out of over 2,600 cases, according to spokeswoman Bernadette Alden.

“Our safety procedures and protocols were strictly adhered to and we have no active cases of COVID-19 in our community,” she said.

Coppola-Wallace noted that it wasn’t hard to train the Williams College students and staff in the process, and since then it’s been moving like clockwork.

“Upperclassmen have been mentoring the younger students, telling them to wear a mask, helping them understand the testing procedures,” she said. “They’re all very willing to follow the rules and do what needs to be done to make this a successful semester.”

The initial effort to get everyone safely back to campus took teamwork and staff from nearly every department to carry out the testing protocols, deliver meals during the quarantine period and get everyone oriented to the new way of schooling.

“It’s really been impressive to have so few infections and only five weeks to go,” Flynn said. “I think we’ve got a really good system, but I keep knocking on wood.”

Now that the weather is starting to turn, the testing facility will be moved indoors, as soon as Monday, to the Towne Field House, where there is room to spread out and socially distance.

And there is no traveling allowed. Students who choose to return home for Thanksgiving will not be permitted to come back to school and will switch to remote learning for the rest of the fall semester, Coppola-Wallace said. There will be no winter session in January.