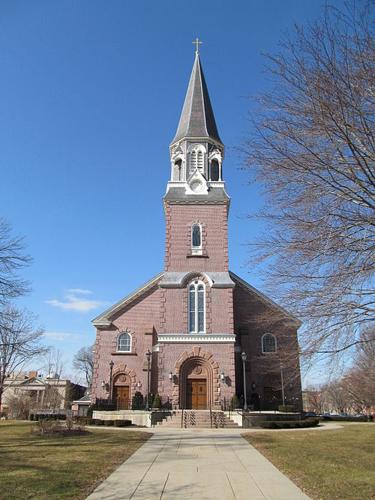 St. Michael's Cathedral in Springfield, home of the Roman Catholic Diocese of Springfield. The diocese subpoenaed an Eagle reporter's notes and communications with a confidential source. The Eagle is fighting a court order to comply on grounds it could reveal the source's identity. The case raises concerns about protections for journalists and their sources. 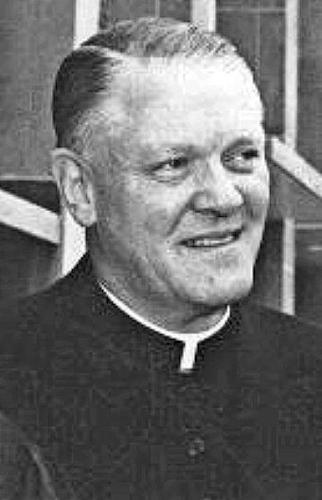 The late Bishop Christopher J. Weldon of the Springfield Diocese.

SPRINGFIELD — The Berkshire Eagle is going to court today to fight the Roman Catholic Diocese of Springfield in its bid to get a reporter to reveal a confidential source.

The Eagle says in court filings that doing so would break the reporter’s promise not to reveal the identity of a person who provided information about a Chicopee man’s claim in a civil lawsuit that as an altar boy in the 1960s he was repeatedly raped by clergy, including a former bishop, Christopher J. Weldon.

The Eagle’s coverage in 2019 revealed an attempt by the diocese to shield the late bishop from being exposed as an abuser. That coverage was supported by an independent judge’s report in 2020 and cited repeatedly in the man’s 2021 lawsuit against the diocese and eight of its officials, including former Bishop Mitchell T. Rozanski.

A subpoena from the diocese’s lawyers asks the newspaper, in effect, to violate a pledge to a confidential source and would undermine its ability to conduct investigative journalism, The Eagle says in court filings.

On Thursday, a judge in Hampden County Superior Court will weigh whether Larry Parnass, The Eagle’s managing editor for innovation, will have to turn over certain notes, communications and other documents to the diocese, which oversees Berkshire County.

In its subpoena, the diocese also demands Parnass provide a deposition on those same elements of the civil case.

In an affidavit, Parnass told the court he cannot produce the requested information while protecting the identity of a confidential source. Forcing him to do all this might give future whistleblowers pause.

“The order also harms my ability to engage in investigative reporting with nonconfidential sources,” he said in an affidavit filed last month. “If I am required to comply with the order, I believe that potential sources in the future will be less likely to speak with me for fear of entanglement in litigation.”

The diocese rejects the claim that a source’s privacy is a consideration in this case. “Production of these materials … will not in any way impact newsgathering or chill potential sources to the press who, like these sources, wanted to be made public,” says a diocese filing. 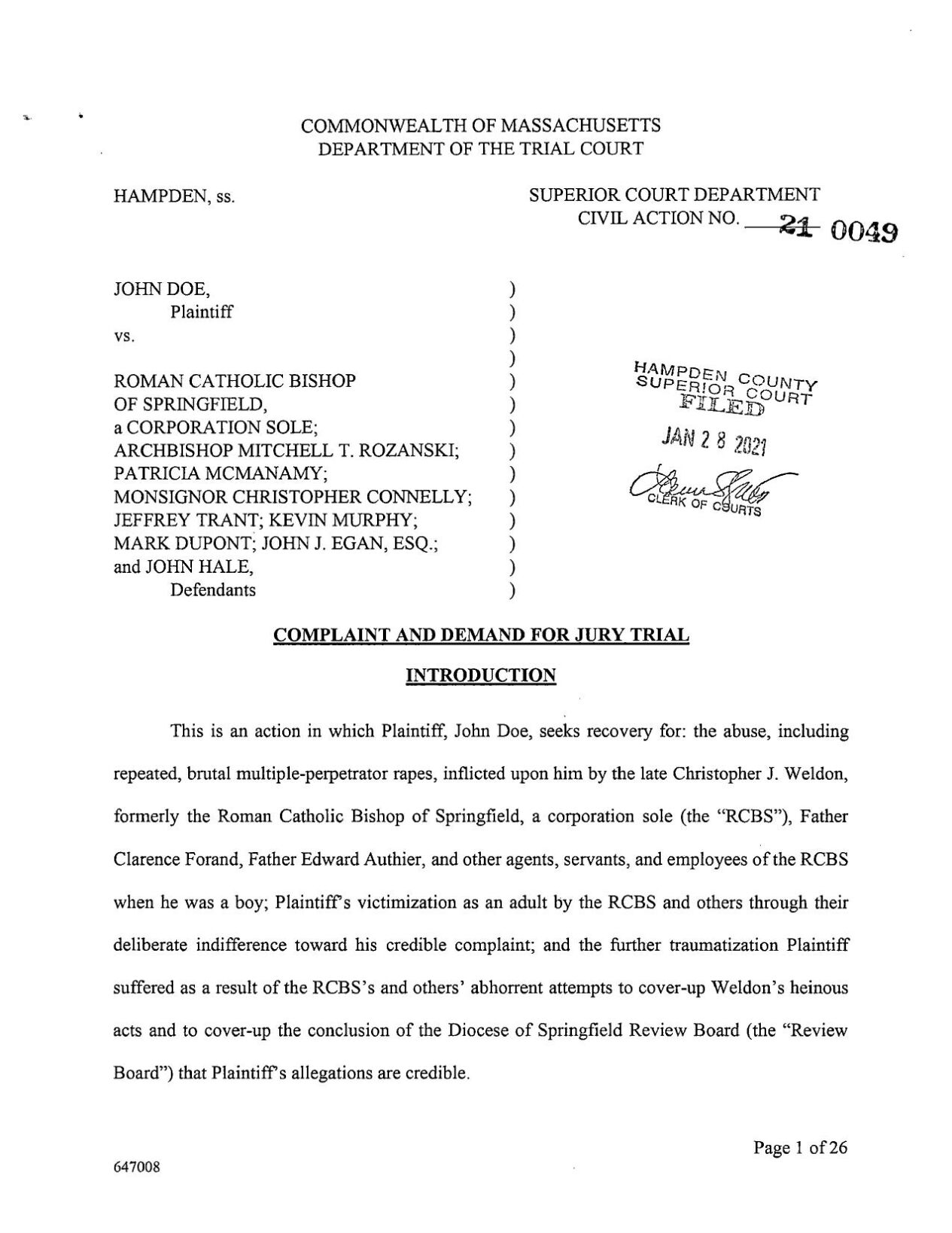 The diocese says Parnass’ information is critical to determining consistency in the plaintiff’s statements about his abusers.

Parnass began reporting on the man’s story in 2019, and has written more than a dozen news articles about the allegations against Weldon and the diocese’s handling of the case and subsequent lawsuit.

The man, listed in court documents as John Doe, filed suit in January 2021 against the Roman Catholic Bishop of Springfield and other diocese clergy and officials, claiming he was brutalized by sexual abuse in the 1960s when he was an altar boy.

The man, now 70, named Weldon and two parish priests as his abusers. Weldon also served the diocese from 1950 to 1977.

The man describes violent and ongoing rapes and abuse as a child, and in his complaint refers to what he experienced as “atrocities.”

A internal diocesan review board and two investigators found his claims credible. Weldon’s name was stripped from a Springfield rehabilitation hospital. A task force was set up to improve the diocese’s handling of abuse claims.

Apart from the abuse itself, the man’s lawsuit seeks redress on grounds that diocesan officials mishandled his claims, failed to act on them and staged a cover-up.

During the litigation, the diocese attempted to shield itself by claiming immunity through its “charitable” status, but the Supreme Judicial Court shot that down in April.

With that defeat, lawyers continued their collection of evidence, known as discovery, leading to the serving of a subpoena to Parnass in March asking him to produce a wide range of documents.

The newspaper moved to quash the subpoena, mainly on grounds that it would reveal sources to whom Parnass had promised anonymity — and impair the ability of journalists to report on powerful people and entities.

Judge Karin L. Goodwin, citing a “classic fishing expedition” by the diocese for a broad array of information, narrowed the scope of the diocese’s requests to Parnass. She centered it only on an area she saw as relevant and that she believed didn’t involve confidential sources — what the man told a diocese investigator and review board about Bishop Weldon before the panel found his claims credible.

Parnass said even this pared down scope will compromise his source and he and the newspaper’s attorney, Jeffrey J. Pyle, are asking for full protection.

It is this “reporter’s privilege,” balanced against the diocese’s right to information to make their case, that Judge Goodwin will weigh on Thursday.

There is no “shield law” for reporters in Massachusetts. It is one of the few states without one.

The Supreme Judicial Court in 1985 dismissed a petition from the governor that would make rules to shield journalists from the kinds of threats now faced by Parnass, who would be subject to sanctions if he refuses to comply with the court.

Multiple attempts to pass a national shield law have failed, leaving a patchwork of different rules, and leaving journalists vulnerable.

Massachusetts follows common law, and takes a case-by-case approach to press protection, while balancing the need for information crucial to a court case.

“It creates a significant chilling effect on information coming to light,” said Jennifer A. Nelson, senior staff attorney for the Reporters Committee for Freedom of the Press in Washington, D.C., which provides free legal representation and other support to journalists.

Among its many online resources for reporters in every state, the committee keeps a list of reporters who have been jailed for refusing to reveal confidential sources.

As of 2019, there were 23 in the U.S. dating back to 1950 — including Judith Miller of The New York Times in 2005 for her reporting on a White House leak. A slew of others were fined over the years; seven were both jailed and fined.

Justin Silverman, executive director of the New England First Amendment Coalition, says he’s hearing more anecdotal stories of newsrooms receiving subpoenas for reporting materials, though he says he has no data to back it up.

He says a universal shield law would give newsrooms certainty about their degree of protection. In the meantime, the coalition is working to help journalists.

“We have a class online titled, ‘What to do if you receive a subpoena,’” Silverman said. “We try to educate newsrooms about what their rights are and good practices within their newsrooms. Occasionally we’ll hear of a newsroom receiving a subpoena and they’ll comply right away not knowing exactly what their rights are or how they can respond or push back.”

The Eagle has pushed back, and will continue to do so, said Publisher Fredric Rutberg.

“This is a question of principle, and that’s why we’re making this case, and we’re proud to be making it,” Rutberg said. “We’re disappointed that we have to.”

Rutberg, a former judge in Berkshire County, said it is unusual to see a civil litigant asking for a reporter’s notes and testimony about confidential communications.

He criticized the diocese for doubling down on this issue.

“It’s particularly galling to me that the diocese, that’s in the business of trying to soothe people, is trying to do something to try to undermine the First Amendment and freedom of speech,” Rutberg said.

The diocese, however, says in court filings that it sees specific materials held by Parnass as key to its case.

Diocese attorney Michael McDonough declined to comment, saying he is not authorized to speak on aspects of the case that relate to press freedoms.

Pyle, the Boston-based media law attorney representing Parnass, says it’s been at least a decade since he’s gone to court on behalf of a reporter to protect a confidential source.

“And I think that that speaks to the care that judges typically take with weighing a party’s request for information against the threat to the First Amendment,” Pyle said, noting that he has testified before the Legislature in favor of a shield law that would give reporters more certainty about their protections.

Pyle says the legal fallout in this case is a perfect example of what’s at stake in the reporting of important news stories — particularly the risks of revealing the identity of a source who was promised that they would remain anonymous.

“There is no question in my mind that Larry’s sources would not have come forward but for that promise,” Pyle said.

EAGLE INVESTIGATIONS: Like all camps that can't open this summer, the one the Springfield Diocese owns alongside a cool mountain reservoir is hurting for money. Some see a new fund appeal as "tone deaf" in light of the past use of Camp Holy Cross by a former bishop found to have raped an altar boy.

Flagging “novel questions of law” that will require at least a monthlong trial, lawyers for a Chicopee man abused by a former Catholic bishop …

A Hampden County judge will issue a decision soon about whether an Eagle journalist will have to turn over notes and communications that could reveal the identity of a source  promised confidentiality.

For now, the judge is protecting The Eagle's confidential sources. But she left the door open for more legal battles as the case moves to trial.