As The Eagle reported in July, Bump’s office pivoted to the infrastructure needs of cities and towns in the four western counties from a study this summer on the unfairness of the state’s Payment in Lieu of Taxes program, which provides some money to towns home to state-owned land.

Towns in Berkshire County that are home to tax-exempt state land aren't getting their fair share of support. Here's how people hope to fix that.

In a call with reporters Monday, Bump said her time living in Berkshire County convinced her that rural communities are not getting their fair share of state investment.

“I lived there for 20 years and I saw the reality of the east-west divide,” Bump said.

And with both a state surplus and copious amounts of federal funding now flowing, this is the time to act to help smaller communities catch up with basic repairs that they can’t afford on their own.

Failing to do so, she said, will increase the state’s economic divide.

“This should be among our highest priorities,” Bump said. “Now we have this golden opportunity that we’ll never have again to invest in these communities.”

– Transportation infrastructure such as roadways, bridges, and culverts are an area of primary concern.

– Continued investment in high-speed broadband is critical to the success of the region.

– Many communities have outdated municipal buildings that are in need of replacement or significant repairs and renovations.

– There is a lack of formalized support for most municipal buildings.

The report released Tuesday, “Public Infrastructure in Western Massachusetts: A Critical Need for Regional Investment and Revitalization,” presents the results of a survey of municipal leaders in the four western counties. Bump’s team in the Division of Local Mandates found that with a median population of 1,800, the 101 cities and towns in the region are often too small to finance infrastructure repairs on their own.

“This report issues a challenge to policymakers to act now to preserve the viability of Western Mass. communities,” Bump said.

Ben Tafoya, director of the Division of Local Mandates, said 45 communities answered the survey, and called that a “healthy sample.”

While the state helps communities build schools, there is no equivalent program for public safety buildings, leaving communities like Pittsfield and North Adams with police headquarters no longer suited to modern policing and criminal justice.

As residents of the region know, getting around in a rural area means avoiding closed bridges and bumping along roads long past-due for resurfacing. 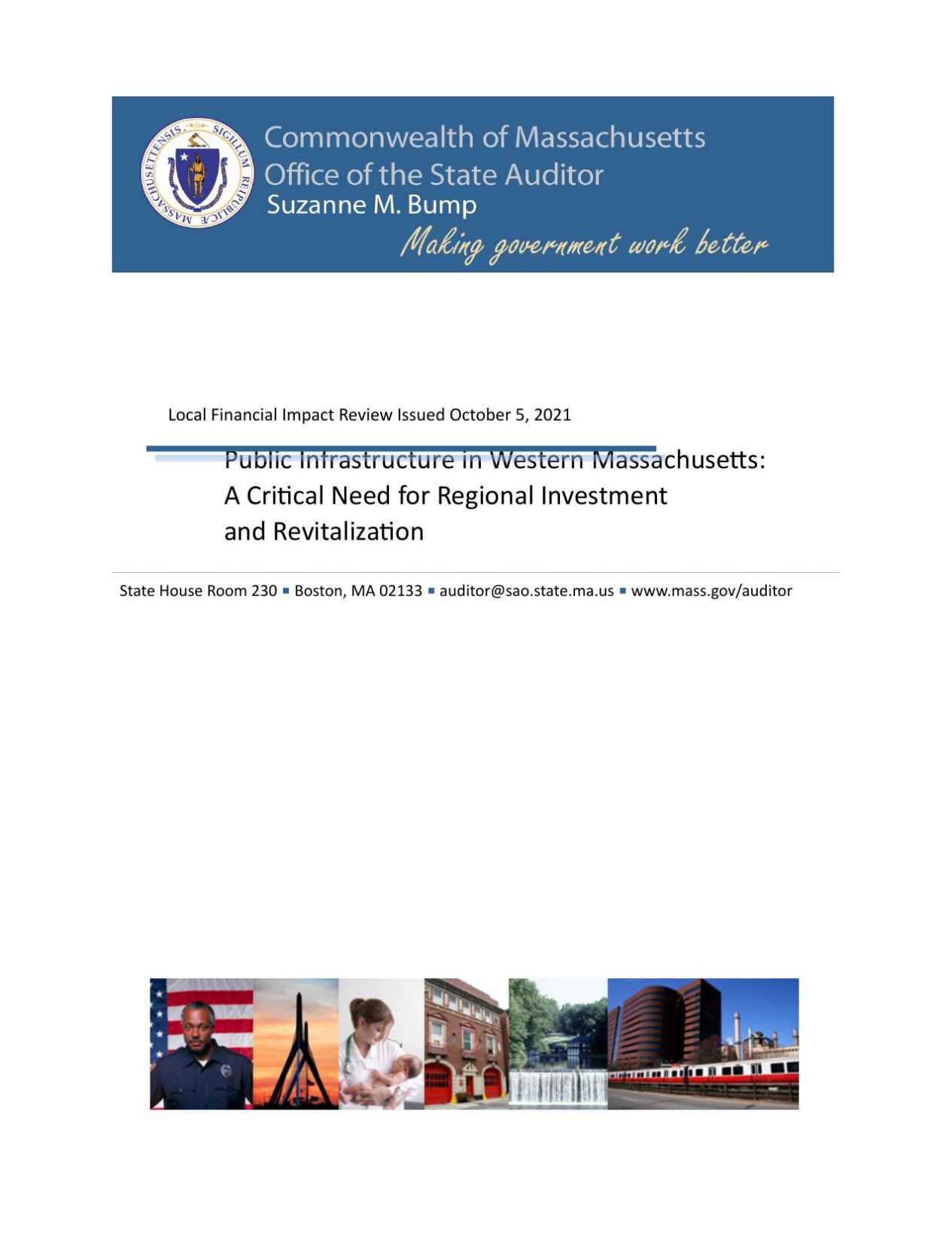 While the state shares revenues with communities for road, bridge and culvert repair, the amount available each year is as much as $380 million short of demonstrated need, the report says.

Bump says she supports calls from the Massachusetts Municipal Association to increase Chapter 90 money for highway repairs — and noted that state Rep. William “Smitty” Pignatelli, D-Lenox, has called for a change in the formula used to allocated that money.

The formula hasn’t been updated since the 1970s, Bump said, and continues to deprive the most needy communities of critical help. And yet towns rely on it, she said; Chapter 90 funding accounts for 63 percent of yearly road spending in towns.

The municipal association has recommended that $100 million be added to yearly Chapter 90 funding, along with a one-time infusion of $200 million.

The Chapter 90 formula, Bump said, should account for the many miles of roads in small towns in the region — and not be allocated to a large degree on the basis of population.

Some of the small towns in the four counties have the highest tax rates in the state, Bump said, and yet they’re unable to pave their roads and fix culverts and bridges without special state allocations.

The auditor’s team found that small towns are also disadvantaged when it comes to applying for competitive grants, simply because they don’t have the professional staff needed to get technical submissions in order.

“They are unable to develop long-range plans and be ready when a new round of funding is announced,” Bump said. “We’ve got to take a different approach and provide more technical assistance to rural communities.”

Bump conceded that the needs her department has documented come as a new Census that found 10-year population losses in Berkshire County could dilute the region’s political influence in Boston.

“It’s not a very rosy picture, quite frankly,” she said.

It’s never good to see our county’s influence diluted on Beacon Hill, but the Berkshires’ expected loss of a state House seat in redistricting…

The roads may be small, but the cost of fixing them is high. See which Berkshires routes are poised for repairs after a more than $3 million infusion from the state.

A warmer and wetter climate will mean more severe storms, less snow and worse heat waves in Berkshire County. Changes may alter the forest ecosystems that not only provide clean air and water but bring tourists.

Mud season has long caused driving headaches in Western Mass. A new proposal asks the state to look at the issue

Our Opinion: Division Street Bridge reopening, while welcome, should also be a warning

Nearly three years after its closure, the prospect of the Division Street Bridge reopening to motorists this summer is as welcome as it is ove…

Is this election likely to exacerbate Massachusetts’ regional inequities?

If this year’s ballot is any indication, Massachusetts’ ongoing battle with regional inequity has only become more serious as western and central parts of the state struggle to overcome a declining population and a lack of representation in statewide offices.