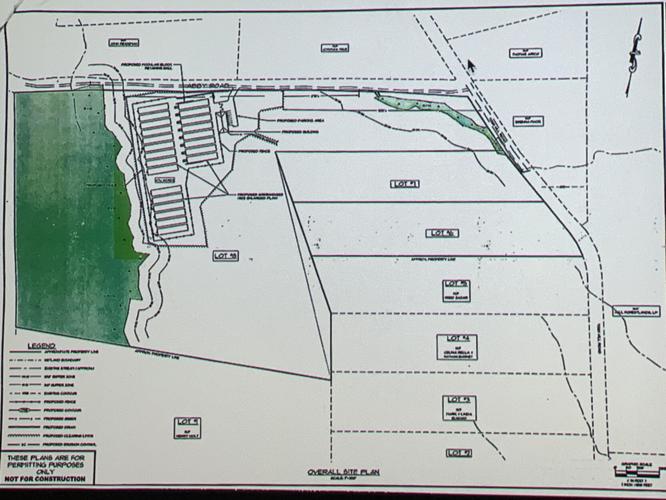 A screenshot from Sama Productions LLC’s permit hearing Monday, showing the company’s 23 greenhouses and building in relation to surrounding property. 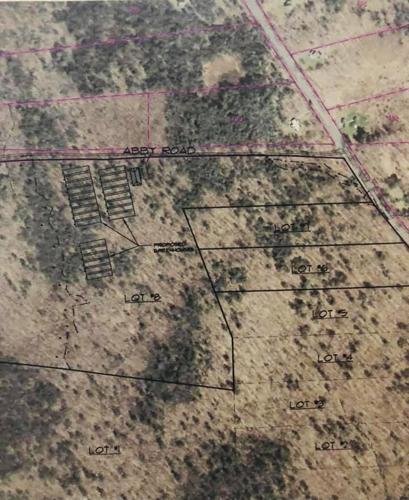 An annotated aerial photograph shows greenhouses and other buildings that Sama Productions LLC plans to build on 46 acres in Sandisfield to grow and manufacture cannabis. Residents are worried that the industry will sully the town’s bucolic atmosphere.

A screenshot from Sama Productions LLC’s permit hearing Monday, showing the company’s 23 greenhouses and building in relation to surrounding property.

An annotated aerial photograph shows greenhouses and other buildings that Sama Productions LLC plans to build on 46 acres in Sandisfield to grow and manufacture cannabis. Residents are worried that the industry will sully the town’s bucolic atmosphere.

SANDISFIELD — After a marathon public hearing Monday on a commercial pot grower’s plans, town officials pushed their vote to next week to give the company time to produce more information.

The Select Board will meet again April 5 to discuss and vote on Sama Productions LLC’s special permit request.

Board member George Riley asked for clarity on potential toxic byproducts from the company’s odor-control method, how solvents in the manufacturing lab will be contained so as not to pollute the air or groundwater, and noise levels from exhaust fans.

Riley also asked for more detailed contact information for the company’s partners and assurances that a deed restriction on Sama’s property is lifted.

Sama plans 23 organic-grow greenhouses totaling more than 100,000 square feet, and a 5,000-square-foot building for processing the plants into oils on a 46-acre parcel near Abbey and Town Hill roads.

Their engineer, James Scalise of Pittsfield-based SK Design Group, said there are no odor, water use or environmental impacts, and that the company has to apply for a permit from the Conservation Commission.

He said the facility will be buffered by the Sandisfield State Forest, and can’t be seen from the road.

The timing of construction will depend on when the state issues Sama a license.

The company, formerly known as Fulcrum Enterprises, had planned a smaller version in Housatonic last year but withdrew its permit application after encountering fierce opposition from future neighbors worried about odors, noise and other potential fallout in a partly residential area.

SANDISFIELD — As several cannabis firms vie for permits to operate here, the Planning Board will present a draft of its first set of proposed …

Sama arrived before Sandisfield drafted cannabis bylaws; the Planning Board this month approved a proposed draft for annual town meeting May 15, and voters still must approve those.

Under its host community agreement with the town, Sama will pay fees and taxes that include 3 percent on the first $5 million gross revenue for the community impact fee to the town. It also will include $15,000 in annual donations to several town departments.

Supporters of the project cite that revenue as a rare opportunity in a town that struggles to pay for care of its roads and schools. Opponents, though, don’t want industry tainting a bucolic landscape with lighting, however minimized, fencing and extra traffic.

As a result, Sama’s plans and the hearing itself revealed divisions in town around commerce, change and economic perspective. 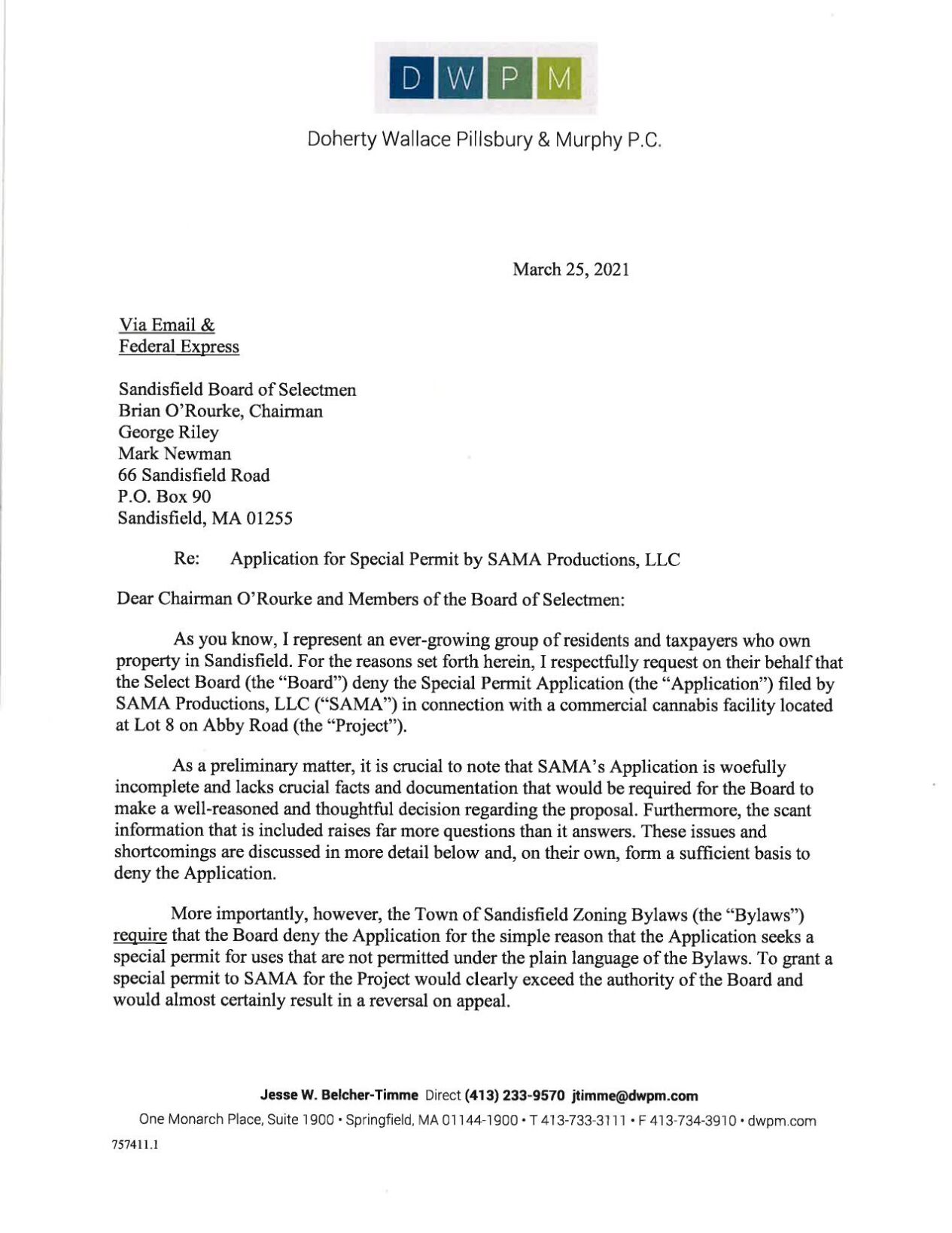 A group of residents and taxpayers has hired an attorney, who, in a letter to the town, says that the bylaws do not support Sama’s “monstrous complex” of industrial manufacturing or the greenhouses as planned. Attorney Jessie Belcher-Timme writes that Sama’s permit application is “woefully inadequate.”

Resident Jay Greenwell said the project’s size is “tantamount to a Home Depot,” and its location “deep in the forest” and off unpaved roads is unwelcome.

Others asked why the three-person board would consider a project that neighbors feel will bedevil them.

“I find this very offensive and very detrimental,” said John Riedman, who owns land across the road from the proposed operation but does not live there. “Is this actually something that you will take seriously?”

Select Board member Brian O’Rourke assured him that they would, and that two board members live within 2 miles of the property.

Supporters of Sama’s plan, like Barbara Cormier, want officials to seize this chance for a windfall amid the ever-growing tax burden on residents.

“Our town needs the money desperately,” she said.

Kathy Burrows pointed to the amount of state-owned land, as well as agricultural land subject to property tax reductions, that also weighs on taxpayers.

Roger Brown said the town mostly is forest because of all the fields no longer farmed by their owners.

“Abbey Road ... is vacant; there are no buildings ... so, the damage is prospectively to people who would like to maintain the look and feel, but they don’t own the property,” he said. “So, you really need to back off and think about it from a town’s perspective.”

Dolores Harasyko, Sandisfield’s town clerk, as well as a resident, said the town has “chased away” too many opportunities over the years.

“Where else is the revenue coming from?” she asked. “And it’s a short boom time, because other states are going to be approving it.”