The yellow line on this map marks the prospective route that will be studied by the state Department of Transportation. 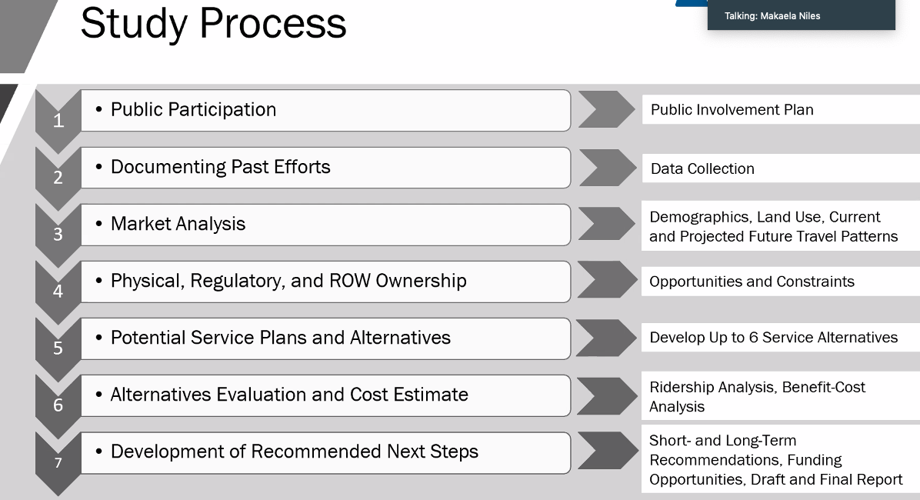 These are the steps that a state Department of Transportation team will follow over the course of 18 months to evaluate the feasibility of passenger rail service on the "northern tier," from North Adams to Boston.

Three words that popped onto computer screens Tuesday seemed to capture the terrain ahead, as dozens of civic leaders gathered online to bless an effort to restore passenger rail service across the top of the state.

Lots of both, actually.

The phrase appeared on a slide early on, as Makaela Niles of the state Department of Transportation described her team’s plan, over the next year-and-a-half, to gauge the feasibility of enabling people to travel by rail between North Adams and Boston. Like an earlier study of east-west passenger rail travel across the state’s midsection, including Pittsfield, this venture was ordered up by the Legislature.

No money has been allocated to launch service, and the prospect of that funding remains uncertain.

Unlike that earlier effort, which outlined possible service in a report last fall, the “northern tier” project begins with the coronavirus pandemic mostly in the rearview mirror — making it all the more timely, officials said Tuesday.

State Sen. Adam Hinds, D-Pittsfield, joined others in calling for the DOT study to look forward, not back, amid what he called a “moment of uncertainty.”

“It does feel like a ‘build it and they will come’ moment,” Hinds said. “It’s a critical time for getting this right.”

The hour-ong session served as a kind of pep rally.

Participants called on political leaders to build an alliance able to keep the dream of restored service going, against whatever hurdles it encounters. They called, as well, for residents to have ample chances to comment, for the project to consider service into Vermont and the Albany, N.Y., area, and for the state’s federal delegation to be tapped for help.

“We do want to run this almost like a campaign,” said state Sen. Joanne M. Comerford, D-Northampton, who convened the gathering. “We want to do this together.”

From Berkshire County, participants included Thomas Matuszko, executive director of the Berkshire Regional Planning Commission, and Andy Hogeland, a member of the Williamstown Select Board. About 70 people took part.

As the “Opportunities and Constraints” line on Niles’ slide suggested, the project could be foiled by physical challenges on an older rail corridor, by regulatory barriers and by right of way problems.

PITTSFIELD — Rather than drop a thick report and skedaddle, a state transportation official committed Thursday to further study of whether pas…

Niles, the DOT’s project manager for the Northern Tier Passenger Rail Study, said that her team, with help from a consulting firm not yet on board, will examine what it would take to create passenger rail service that is able to compete with other forms of transportation now available.

That lift, she said, means evaluating costs and benefits. The costs, she said, include what it would take to put service into place and keep it running, while getting a handle on what ridership for the service would be.

On that point, officials urged the DOT to keep in mind that the pandemic’s shift to remote work might render past data on travel and commuting patterns outmoded.

Linda Dunlavy, executive director of the Franklin Regional Council of Governments, said that census data might not capture the potential ridership that lies ahead.

“How do we look at the changes to all of Massachusetts because of the pandemic?” she asked.

The study kicks off as CSX Corp. presses its effort to purchase Pan Am Railways, which controls at least some of the track miles needed for passenger service.

State Rep. John Barrett III, D-North Adams, said in an interview before the meeting that the idea of relaunching passenger rail goes back at least to the 1980s, when, as the mayor of North Adams, he hosted a visit by then-Gov. Michael Dukakis. The Heritage Park location in the city had stirred interest in having trains roll again, Barrett said. A few decades before that, he recalled, his father dragged him to witness the final rail trip out of Williamstown, in the late 1950s.

Neal says infrastructure package, up next after relief plan, could help east-west rail

SPRINGFIELD — Once the $1.9 trillion COVID-19 relief plan becomes law, up next will be an infrastructure package that could include major inve…

Like others on the call Tuesday, Barrett believes that if the push starting now falters, the dream of a northern rail route might die.

“This is the only crack we’ve got at it,” he said.

Hogeland, the Williamstown official, urged the DOT to include Adams in the study. He pressed for the state to make sure the prospective sale of Pan Am Railways to CSX, a freight carrier, does not get in the way of adding passenger service.

Meredith Slesinger, the DOT’s rail and transit administrator, said her department is in talks with CSX and will monitor the sale’s effect on Massachusetts rail service.

“We know residents of Western Massachusetts are hungry for expanded rail service,” she said. “A Western Mass. rail network could be truly revolutionary for our communities.”

Details of proposed passenger train service between North Adams to Boston are emerging, as state transportation officials enter a second year of planning spurred by a 2019 law. One estimate says it could cost $2.187 billion to bring a passenger rail line to North Adams.

Will there be a passenger rail from North Adams to Boston? State presented updates to its ongoing study

The Massachusetts Department of Transportation is holding its first virtual public information meeting Thursday at 6 p.m., as it studies the feasibility of restoring passenger rail service.