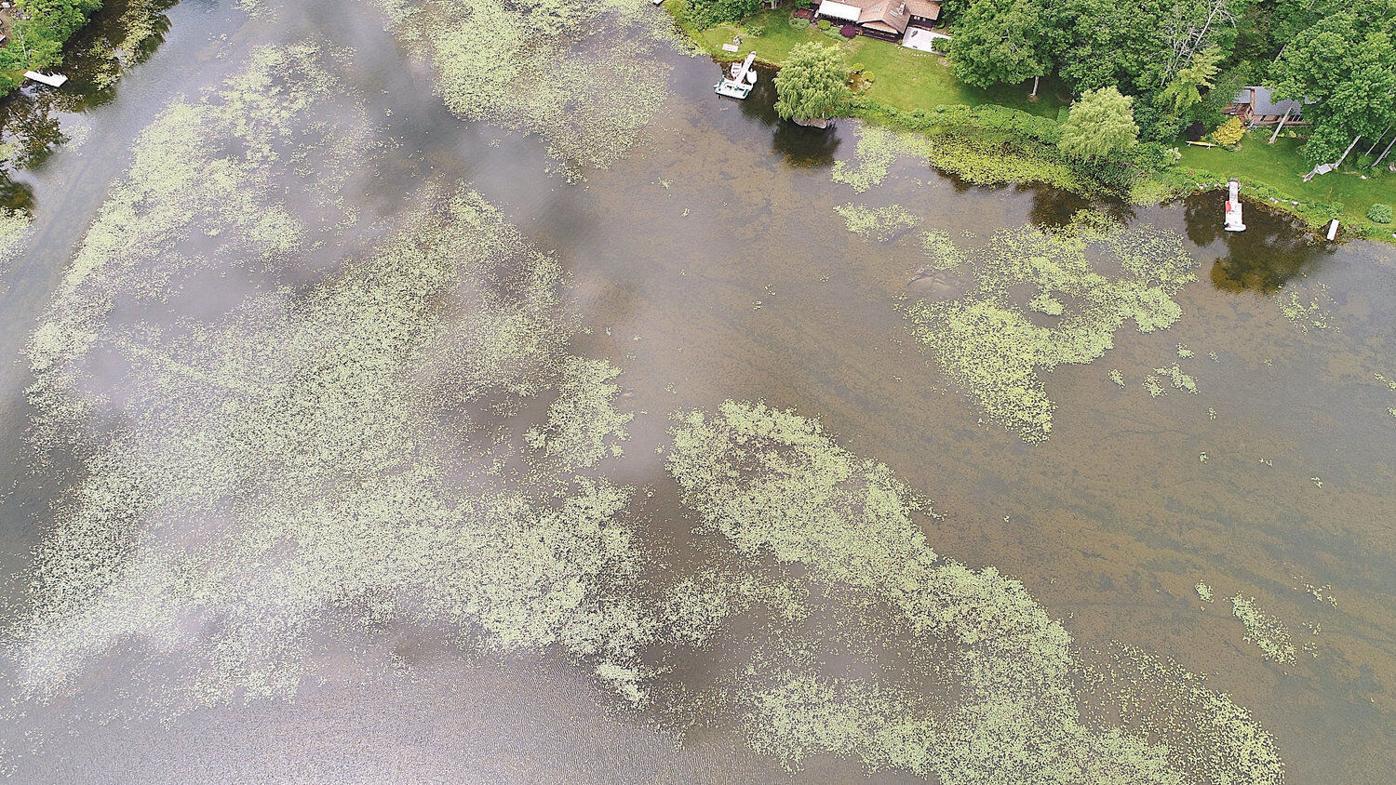 Invasive Eurasian watermilfoil long has been a nuisance to homeowners and boaters on the Stockbridge Bowl. A legal settlement has cleared the way for the use this summer of the herbicide fluridone on a portion of the lake. 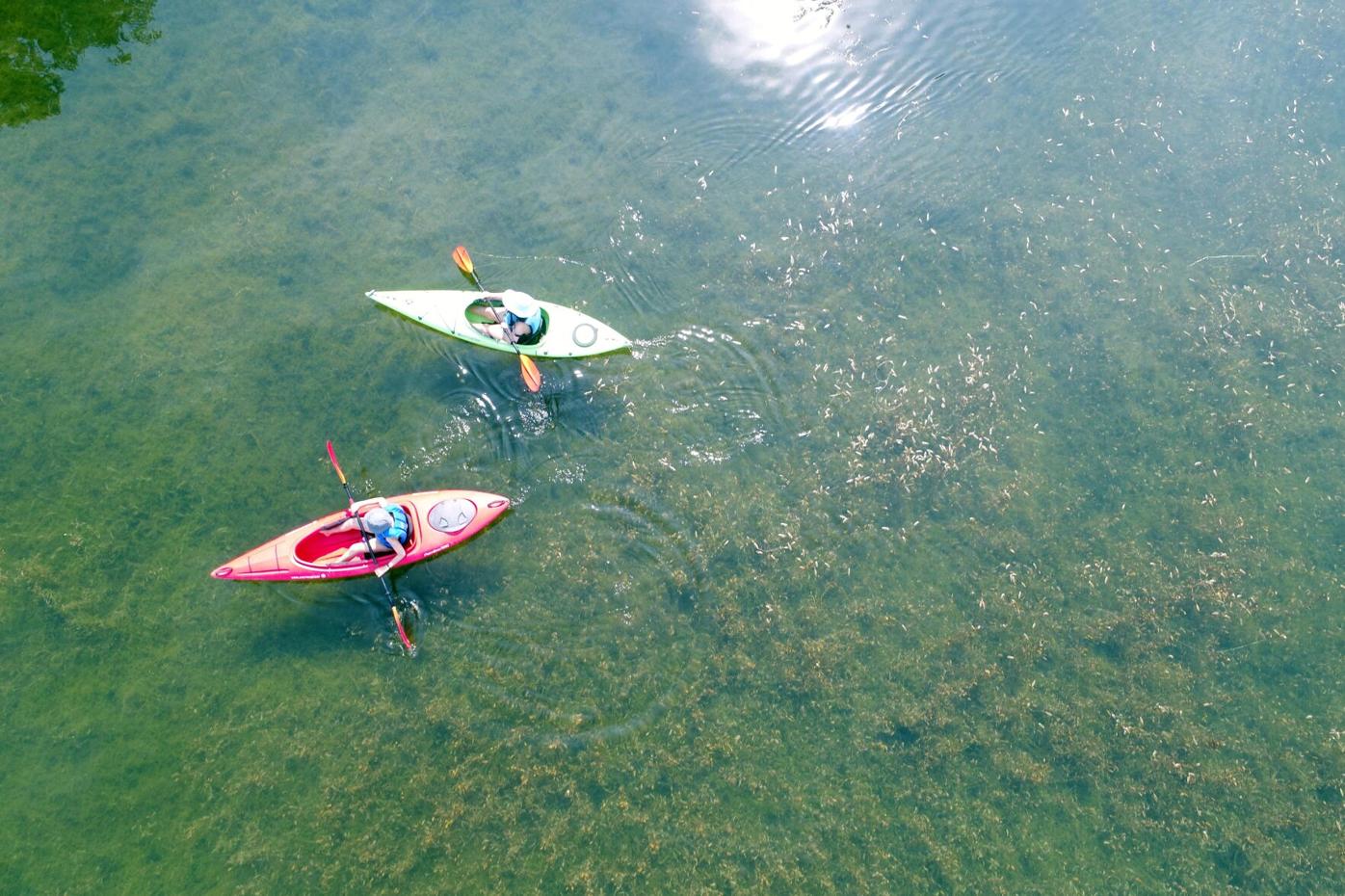 Women kayak on the Stockbridge Bowl over areas with thick Eurasian watermilfoil. Although last summer’s infestation was not nearly as bad as in recent years, the invasive weed is expected to make a comeback in the next year or two.

STOCKBRIDGE — An agreement between the town and the Stockbridge Bowl Association has ended the 13-month legal standoff over a proposal to rid the lake of invasive Eurasian watermilfoil weeds.

The town has paid the association $18,500 to compensate for recent legal expenses incurred in the dispute, which the group plans to use for long-needed upgrades and repairs to the town beach — a magnet for residents, especially younger families.

“Board members felt that it was important to resume and restore the strong relations of mutual support that have historically characterized the partnership between the town and the SBA,” said Richard Seltzer, president of the association.

Eurasian watermilfoil is an invasive weed that has been choking out sections of the 327-acre lake during the summer months for decades. Last summer’s milfoil infestation was comparatively mild, though infestations by other species were much worse and the watermilfoil is expected to make a comeback in the next year or two.

The association wanted to apply a state and federally approved herbicide used in half a dozen Berkshire lakes and hundreds statewide, but the town’s Conservation Commission resisted the application, based on its 2005 order prohibiting pesticides, herbicides and fertilizers in the lake “in perpetuity.”

The dispute landed in Berkshire Superior Court, and Judge John Agostini in December 2019 approved a test treatment of the fluridone chemical. But, the commission again blocked the association’s efforts to apply the test treatment last summer, prompting Agostini to cite the commission for contempt of court Nov. 30.

“When the town elected not to appeal, we entered into a stipulation acknowledging that there was nothing further to litigate,” Seltzer said.

Under the resolution, hatched in closed-door meetings by the commission and the Select Board, the town agreed to reimburse the association for legal expenses. But, that money will be directed to improvement projects at the lake, including parking area upgrades, improved access for vehicles, restoring the sand beach, reopening the snack bar and installing a shallow drainage channel to prevent continual erosion of the area.

The money will be presented back to the town after the Parks and Recreation Committee approves specific improvements, Seltzer said. The association also urged the committee to apply for matching financial support from the Community Preservation Act Committee. 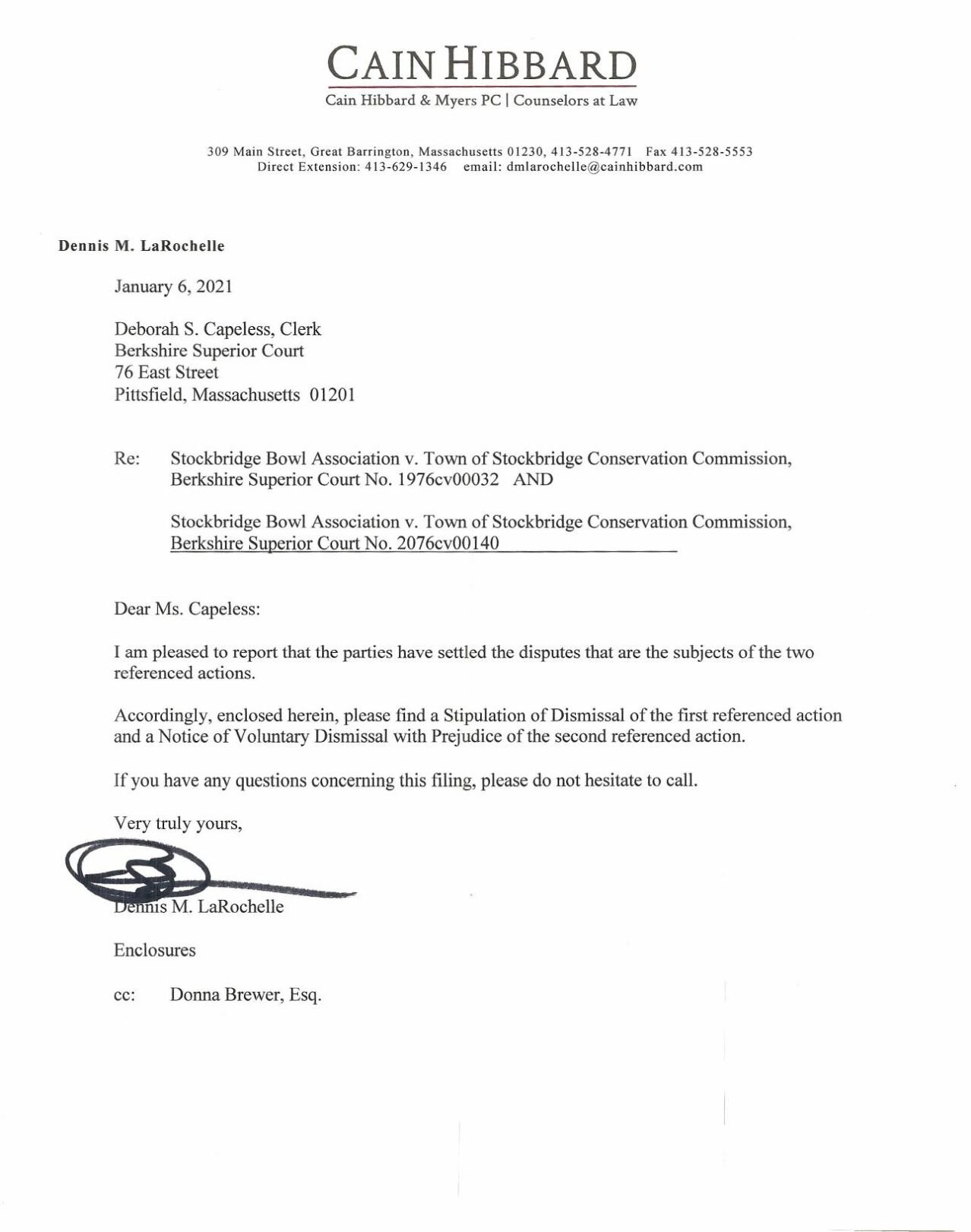 “I am gratified to see the end of litigation and look forward to a reinvigorated town beach,” he said. “The more people use the lake for swimming, sailing, fishing, kayaking, or stand-up paddleboarding, the more we can all appreciate why the lake deserves to be restored and protected.”

In a comment to The Eagle, Town Administrator Michael Canales said: “Now that the issue has been resolved, the town looks forward to developing through the Stockbridge Bowl Stewardship Commission a comprehensive lake management plan that will address the concerns and protect this Great Pond located within the Town of Stockbridge.”

Town Counsel Donna Brewer provided a copy of the legal document to Berkshire Superior Court dismissing the SBA’s lawsuits against the Conservation Commission, signed by all parties to the dispute.

The DEP has approved a “special order of conditions” limiting a summer 2022 test of the chemical fluridone to about 17.5 acres in the southern and western portions of the lake as an ecological restoration project.

The state also requires that each of the two test plots contains an abundance of the weeds totaling at least 50 percent of the designated area.

The revised order from the state “specifically prohibits the application or use of any other lake management practice that would directly or indirectly, purposefully or accidentally, result in the ‘destruction of vegetation’ within the two designated test plots.”

If the herbicide tests are deemed successful by the DEP, the Division of Fisheries and Wildlife and the state’s Natural Heritage and Endangered Species Program, the entire lake could be treated with the fluridone herbicide under strict state control, but not until the end of the growing season in 2024.

As for any use of the town’s two weed harvesters next summer to attack weed infestation, Seltzer noted that Canales, the town administrator, plans to pursue permission for full lake harvesting next summer, subject to state approval.

Seltzer cautioned that a limited harvesting program covering only 10 acres of the lake “would be almost worse than nothing.”

“I would have residents up in arms if they could not move their boats away from their docks or go swimming next summer,” he said. “This past summer, with no harvesting on the lake, we had the worst infestation of nuisance vegetation in anybody’s memory.

“Despite the absence of milfoil, there was a perfusion of other nuisance vegetation, including longleaf pondweed and water lilies,” Seltzer said. “Neither of those nuisance weeds is targeted by fluridone, so the harvester would have been a good response. Based on past experience on Stockbridge Bowl and in other Massachusetts lakes, it is anticipated that there will be a resurgence of milfoil in the very near future, if not this coming summer, then one summer later.”

Seltzer cited Kenneth Wagner, a professional engineer and association consultant, for that information.

At a Select Board meeting last month, Select Board Chairman Ernest “Chuckie” Cardillo declared that “we will bring up the full-lake harvesting with the DEP, we plan on doing that; we all want what’s best for the lake.”

If the herbicide tests are deemed successful by the DEP, the Division of Fisheries and Wildlife and the state’s Natural Heritage and Endangered Species Program, the entire lake could be treated with the fluridone herbicide under strict state control, but not until the end of the growing season in 2024.