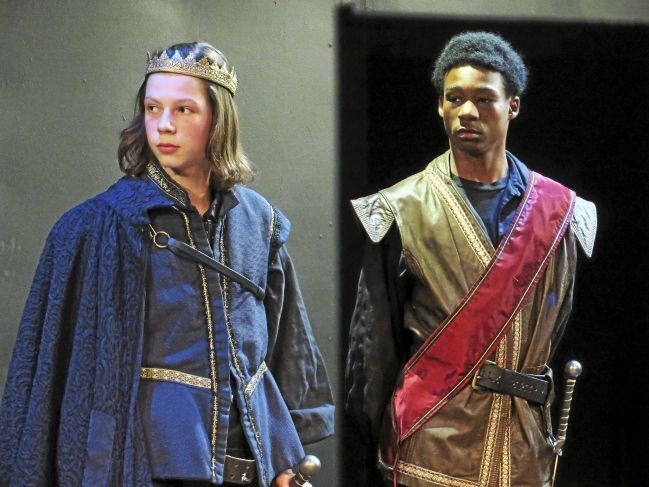 The Berkshire Eagle Students perform a scene from 'Henry V,' as part of their assignment to Shakespeare in the Courts, a collaboration between Shakespeare & Company in Lenox and Berkshire Juvenile Court. 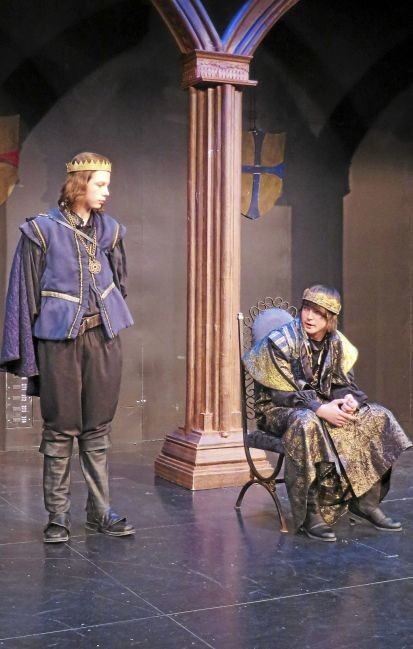 "Henry V" is performed as part of an alternative sentencing program in the Berkshires.

The Berkshire Eagle Students perform a scene from 'Henry V,' as part of their assignment to Shakespeare in the Courts, a collaboration between Shakespeare & Company in Lenox and Berkshire Juvenile Court.

"Henry V" is performed as part of an alternative sentencing program in the Berkshires.

LENOX — "There is occasions and causes why and wherefore in all things," says Captain Fluellen in William Shakespeare's history play, "Henry V."

What matters not at Shakespeare & Company is where its students come from or why they're there, but how they can find it in themselves to be better, more learned, more confident people when they leave.

This spring Shakespeare & Co. continues its collaboration with Berkshire Juvenile Court to work with a select group of youths who, for one reason or another, have found themselves involved with the court system.

What's been known as the "Shakespeare in the Courts" program was conceived by retired Berkshire Juvenile Court Judge Paul Perachi and Shakespeare & Co. Director of Education Kevin G. Coleman in 2001, as a sentencing alternative.

But last Wednesday, the Pittsfield-area group presented, as was printed on the programs, "The Shakespeare Project," with this particular production featuring scenes, monologues and sword fights from "Henry V."

"We really work hard to establish a positive rapport with the kids ... by not putting a label on them right off the bat as a "difficult teenager" or "troubled,"" said Shakespeare in the Courts Program Director Jennie M. Jadow.

She said she and her co-directors want students "to know that there are a lot of really wonderful adults in their world who want to see their successes."

More than a dozen Shakespeare & Co. theater staff in total meet four times a week for a six-week session in guiding adjudicated youths through the language and context of Shakespeare's works, and introducing them to theater itself.

Each group develops scenes to be presented, typically in a 45-minute closed performance, to an audience of family members, friends, and staff of the courts, Berkshire District Attorney's Office, theater, as well as invited members of the press. The program's Northern Berkshire group will present their work in May at a date to be announced.

"Through this alternative sentence, we hope to expose our kids to experiences they're not likely to have exposure to on their own. Hopefully it helps you make other positive choices in your lives," said court liaison Tim McElroy in addressing students and families after last week's performance. He told them, "You are brave performers."

Jadow noted that not everyone is keen on being part of the program. "There are some kids who ask specifically to be assigned to the program as part of their probation while other kids would rather be anywhere else. But in most cases, there's definitely a good shift in the student's attitude from the first week to the last," she said.

One student in this year's Pittsfield group even pushed through the injury of a broken knee to be a part of the performance.

Berkshire Juvenile Court First Justice Joan McMenemy lauded the students' efforts and dedication to their performance, and thanked the families, court staff and fiscal sponsors for their continued support of the program.

Addressing the students before awarding them certificates, McMenemy said, "As a court judge you don't get to see from the stand the bigger picture of who you are and what you're capable of. We're so lucky in the Berkshires to have Shakespeare & Co. to help show us this."

Visit Shakespeare.org/education/ for more information on all of Shakespeare & Company's education programs, or contact Associate Director of Education Jenna Ware at 413-637-1199, ext. 172.

Former Berkshire Juvenile Court Judge Paul E. Perachi, who died Sept. 9 at the age of 82, leaves a legacy as a coach, an educator, a lawyer and a judge.