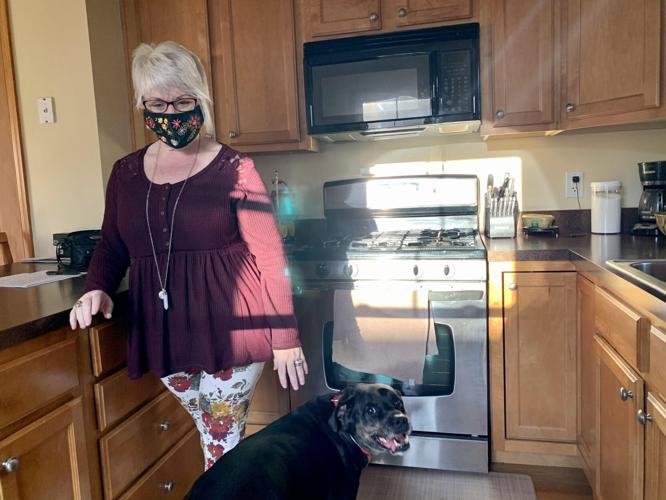 Gina Beligni, with one of two pitbulls at home. Beligni is one of four residents helped by the Great Barrington Affordable Housing Trust’s down payment assistance program. 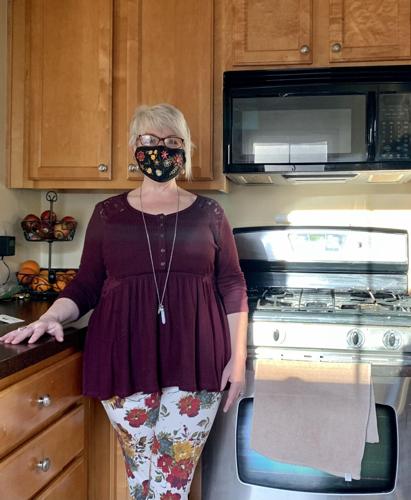 GREAT BARRINGTON — Gina Beligni is in the sunlit kitchen of her new home, trying to dial down the excitement of her two pit bulls, Jasper and Brody, as she explains that she’s never had such a nice place to live.

She had spent the last few years trying to downsize, and righting her finances and credit after a divorce left her with a Sandisfield home that she couldn’t afford to carry or repair. She managed to dig herself out of a financial mess, and sold the home, capitalizing on a sellers real estate market that also made it hard for her to buy a new house.

And things went sideways for a hot second. A missed mortgage payment in the past disqualified her from a low interest rate. Beligni, 54, makes too much at her administrative job at Fairview Hospital, but too little to qualify for significant public assistance.

“I was being refused for everything based on income,” she said. “I thought I’d have to be living in my car.”

Then came a series of fortuitous events that led her to the Great Barrington Affordable Housing Trust. Through the trust’s down payment assistance program, Beligni was able to put 20 percent down on the $145,000 townhouse, with an interest-free loan.

“I started crying,” she said, about the moment when the trust committee approved the loan in a Zoom meeting. “They literally had thrown me a lifeline because it meant I didn’t have to borrow for the down payment.”

Now, she could stay in the area so her daughter, 15, could finish high school, and without having to go on the local low-income housing rolls, for which there was a 28-month waiting list the last time she checked.

It’s the fourth such loan the housing trust has made since it empaneled in 2019 with $110,000 from the town’s Community Preservation Act funds; it received anther $100,000 the following year. With permission from the CPA committee, about $85,000 has gone to housing nonprofit Construct, Inc. for rental assistance.

The trust also has acquired land and homes it will renovate and turn into affordable housing, with deed restrictions to ensure they remain so in perpetuity. It is currently requesting proposals for work on a Grove Street home, and is working with Habitat for Humanity of Central Berkshire on an affordable development off North Plain Road on town-owned land.

For down payments, the trust partners with local banks, and will pay up to 10 percent of the purchase price for homes no more than $300,000. Not all the applicants have asked for the full 10 percent, said Bill Cooke, the committee’s chairman.

And Cooke says that the reason so few have applied is partly because a buyer’s total household income can’t be more than 100 percent of area median income. For a family of four, that’s $80,900.

“That combined with the fact that there aren’t many houses under $300,000 — it’s a tough requirement to fit,” he said.

Beligni said that in an area that is “very much have and have not,” she is grateful to the trust for understanding that not everyone can afford to live and work in town. And now, she and her daughter can do things “that normal people do,” like occasionally go out to dinner.

“Now my daughter and I can walk to the pizza place,” she said. “We live a completely different existence.”