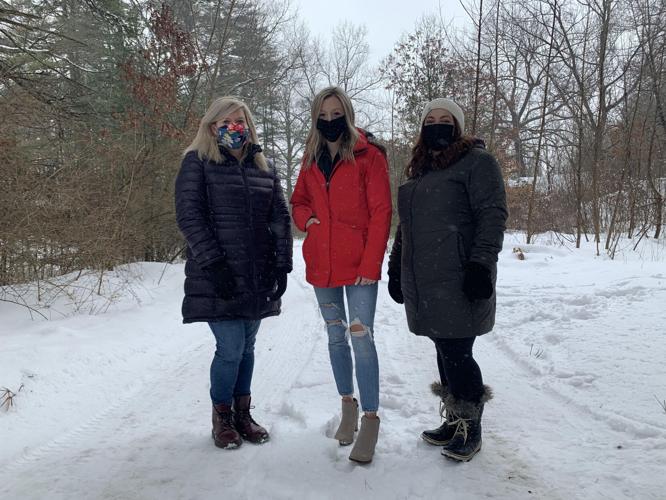 Abutters Lauren Hyde, from left, Tracy Stoddard and Elisa Kellerhouse stand at the entrance to the proposed 21-acre Wiseacre Farm site off Polikoff Road in Sheffield. They have a range of concerns and don’t want the character of the neighborhood to change. 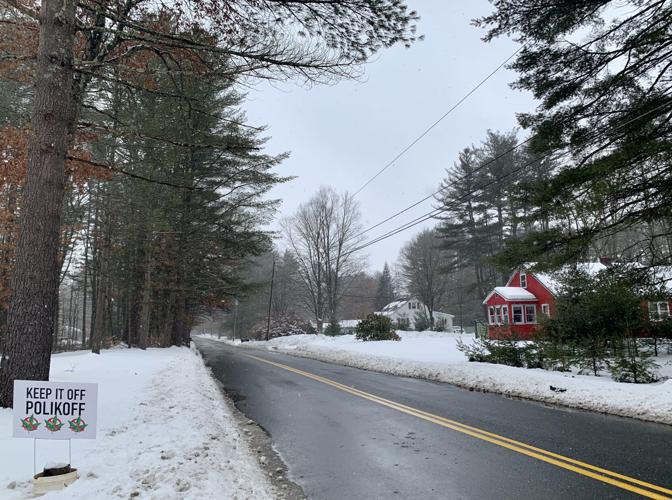 Signs against Wiseacre Farm's proposed cannabis-cultivation project can be seen along Polikoff Road in Sheffield and in the surrounding area of Ashley Falls.

Abutters Lauren Hyde, from left, Tracy Stoddard and Elisa Kellerhouse stand at the entrance to the proposed 21-acre Wiseacre Farm site off Polikoff Road in Sheffield. They have a range of concerns and don’t want the character of the neighborhood to change.

Signs against Wiseacre Farm's proposed cannabis-cultivation project can be seen along Polikoff Road in Sheffield and in the surrounding area of Ashley Falls.

SHEFFIELD — Amid fierce opposition and grilling from residents late into the night, the town’s Planning Board Wednesday delayed a decision on a permit for an outdoor cannabis farm in Ashley Falls.

The board moved its teleconferenced discussion and possible vote to March 10 for Wiseacre Farm’s plan to grow 95,000 square feet of marijuana crops at 286 Polikoff Road for wholesale distribution. The 21-acre parcel lies in the general business and rural districts.

The board heard a slew of pleas to reject the project.

Jon Piasecki, co-owner with Anthony Bowen, said the Ashley Falls farm would be one of the largest outdoor cannabis-cultivation ventures in Massachusetts. It would employ five to 12 workers, with the most during harvest season months.

In response to an abutter’s question, Piasecki admitted it was possible that there could be more than 12 employees, if needed.

The Polikoff Road location has 32 abutters, and their concerns range from noise, odor and a potential drain on the water supply. They also worry about safety from “unwanted curious people” and extra traffic.

They drafted a Change.org petition that, as of Wednesday, had gathered 258 signatures.

Tracy Stoddard, who lives across the street, said earlier that the draw on well water here is already heavy, given nearby sod and dairy farms around the corner. Some residents have struggled with adequate supplies from their wells, she added.

The company estimates it will use 750,000 gallons per year, and that precipitation at the site will recharge the aquifer at 13 million gallons annually. Also, it plans to deal with odors.

Abutter Lauren Hyde previously had told The Eagle that the street is a prime “trick-or-treating destination” for greater Sheffield, long a farming community, and families don’t want to see the character change.

“This is a residential area with kids and families, and that’s the way we want to keep it,” Kenneth Brown, a resident, told the board Wednesday.

They also don’t want to see the farm and its 7-foot-high security fencing.

Piasecki says they won’t, since there will be 700 feet of “re-growing pine and oak forest” between abutter homes and the farm.

John Vail, another Polikoff resident who is not a direct abutter, told the board he is more concerned about local manure lagoons, slurry trucks and chemicals that soak the town’s vast cornfields.

Piasecki says the cannabis industry is “clean,” in part, because of strict state regulation. He also said the soil in this area of Sheffield is ideal for cannabis crops.

Neighbors are also rattled because Wiseacre isn’t the only outfit seeking a cultivation permit on Polikoff Road. ZGC LLC already has a financial agreement with the town should it gain local and state approvals. The Millerton, N.Y.-based principals of the company are Christopher Regan, Zachary Ahrens and Gregory Cohen, according to corporate filings.

These and three other proposals in motion have sparked growing concerns among residents and a larger discussion in town about what appears to be a rapid proliferation of the industry here. The Select Board on Tuesday dedicated time for a discussion and decided to hold a meeting with the Planning Board in the coming months.

At that meeting, Select Board member Martin Mitsoff said residents of the town voted to approve the town’s marijuana bylaws, and have the power to alter them.

“That was not a unilateral decision by the Planning Board,” he said.

Sheffield has five existing cannabis businesses, including cultivation and retail, and five prospective firms in various stages of permitting, including Wiseacre, according to town officials. Two others have indicated interest but have not presented plans.

A rendering of the 95,000-square-foot outdoor cannabis farm on Polikoff Road in Ashley Falls.

SHEFFIELD — For the second time in the past two weeks, the Planning Board has denied a permit request for a cannabis grow operation proposed f…