PITTSFIELD — The candidates for Berkshire County sheriff engaged in heated conversation Monday in which the subject matter progressed from the political to the personal.

With less than month left to campaign, incumbent Thomas Bowler and challenger Alfred “Alf” Barbalunga took part in a series of often argumentative exchanges during the hourlong election season event moderated by local blogger Dan Valenti, who let the candidates pose opening questions to one another to kick off the afternoon. 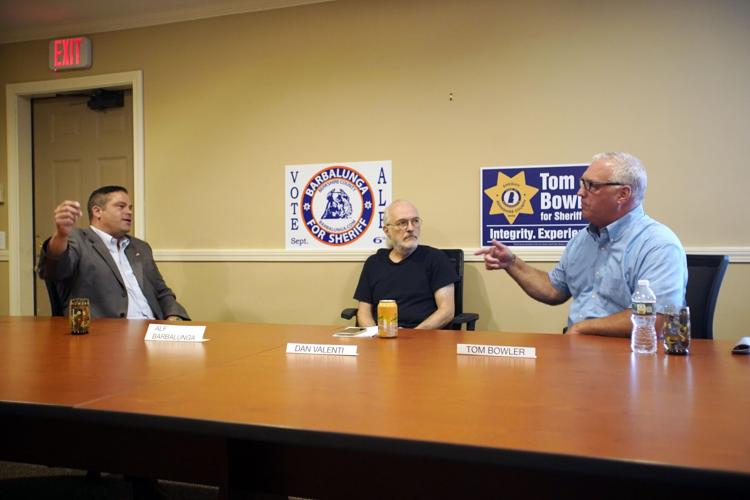 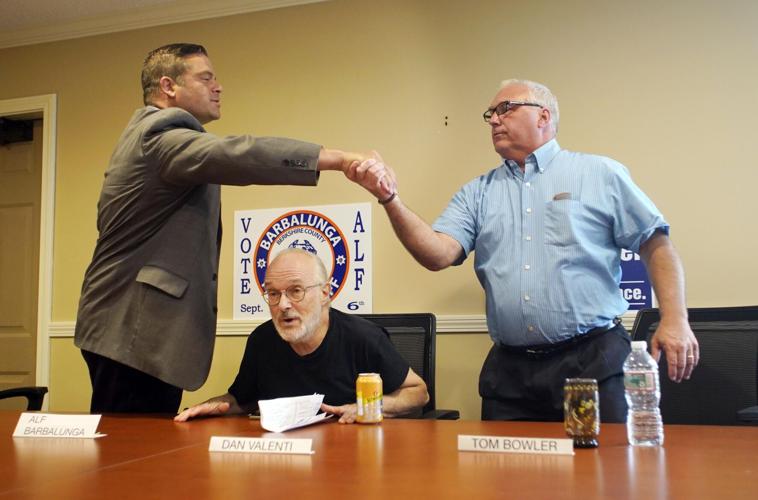 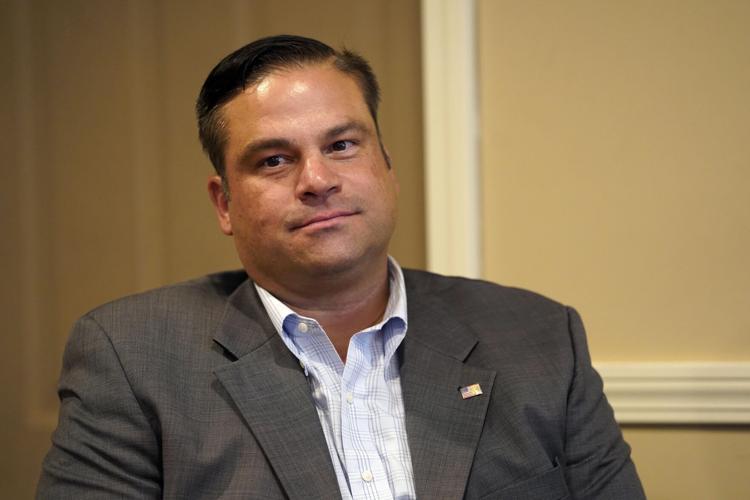 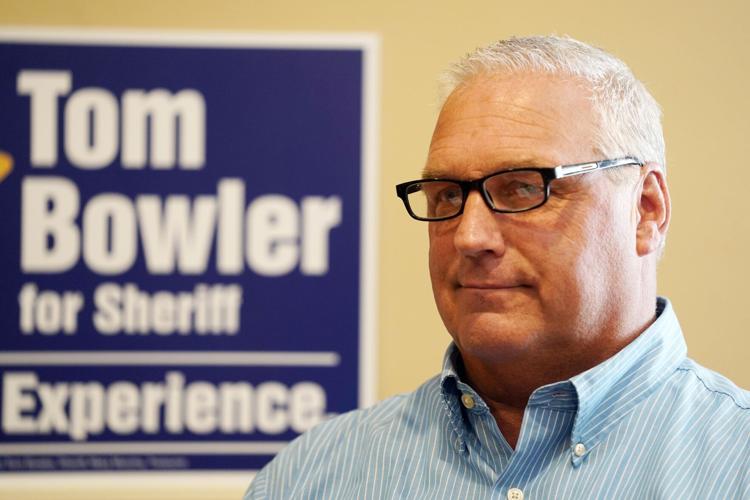 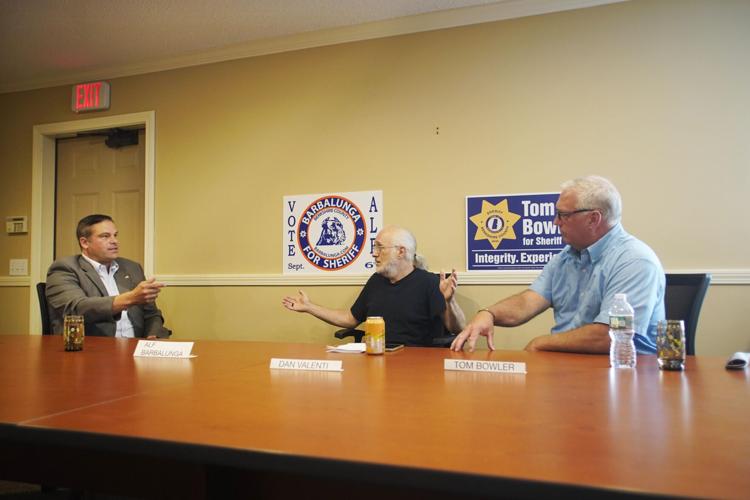 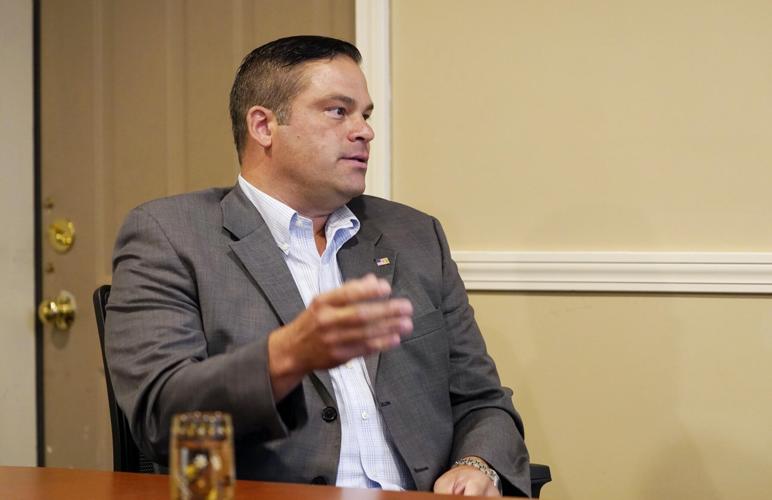 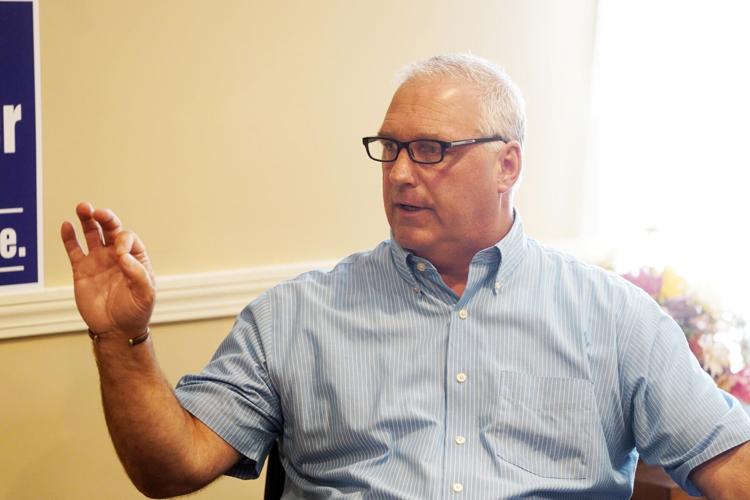 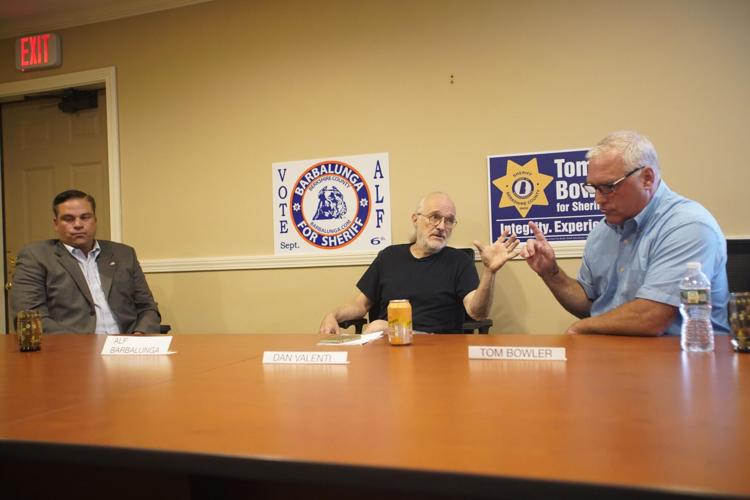 In response to Barbalunga’s inquiry, Bowler said he plans to serve out a full six-years if reelected for a third term. Bowler asked Barbalunga how precisely he would return the female inmate population to the Berkshire County jail facility on Cheshire Road — which he has been pledging to do if elected.

“The process would begin on Day One, for sure,” Barbalunga said. “We will arrange it as a courtesy for [Hampden County Sheriff Nick Cocchi], figure out the best timing for him, transportation, the facility, what pods we will use,” he said. “As you know, you’re currently about 38 percent capacity.”

Asked by Valenti how much it will cost to house female inmates at the Berkshire County Jail and House of Correction, he did not provide a number, but indicated it would not have a “net effect” on the budget. “We will be reevaluating and re-appropriating current staff” to serve women, he said, “and perhaps we will add the staff.”

Sheriff candidate Alf Barbalunga says reopening the female pod at the Berkshire jail won’t be that hard. Here's how he'll do it

Bowler took issue with Barbalunga’s use of the phrase “our women” to refer to females who are held in custody, calling it “possessive” in nature. Bowler again defended the practice of housing incarcerated women in Chicopee, saying it affords women the best chance of rehabilitation.

“In today’s day and age, if a woman is incarcerated, then things are bad for them. Substance use disorder, violent crime, victims of violent crime, sexual abuse, victims of sexual abuse, all these challenges they have to overcome, and [the Western Massachusetts Regional Women’s Correctional Center in Chicopee has] a renowned staff doing that right now. To bring them back to Berkshire County would be a detriment to their therapy, to their counseling, to their treatment,” Bowler said. “None of those things are going to be in place when you bring them back.”

The conversation flowed into sometimes fractious dialogues in the closed-door conference room, which grew hotter inside as the hour progressed with a handful of people associated with both campaigns looking on. It was all captured on tape by a cameraman for Valenti, and a separate one there from the Barbalunga campaign.

Barbalunga, who is chief probation officer of the Southern Berkshire District Court, charged that Bowler’s leadership team lacked adequate representation of women, Black people and Latinos. Both candidates accused one another of being “no-show” leaders in the office, a charge both candidates denied.

Barbalunga pivoted, saying his team hears “a number of things about Tom and his wife, Tom and other interactions.”

“What do you mean by other interactions?” Bowler asked.

“Did he mention you?” he added, turning to his wife, Dayle, who was seated beside him.

Bowler told Barbalunga to “keep my wife out of this.”

A testy exchange followed during which Barbalunga suggested that someone connected to Bowler’s wife was responsible for a series of negative social media statements directed against his campaign.

Valenti jumped back into the fray. He said that “questions of womanizing have come up for both of you,” allegations Valenti said were worth exploring because the responses may speak to the character of the candidates.

“Are you a womanizer?” Valenti posed to both candidates. “Do you have complaints against you for sexual harassment?”

Barbalunga said, “absolutely not,” before being asked directly by Valenti whether he has been “faithful to his vows.”

“I have a wonderful marriage going on 13 years,” Barbalunga said. “If you’re asking me if I’ve ever had any infidelity, the answer is no.”

Valenti raised the issue of post-retirement payments made to Jack Quinn, formerly the superintendent of the Berkshire County Jail and House of Correction.

The topic was previously raised by the Barbalunga campaign, who derided it as an example of what he termed Bowler’s “payroll empire.” Bowler defended the move, saying Quinn retired from the office in 2021, but continued working on two projects associated with the Second Street Second Chances program, saying the office compensated Quinn through grants received for the projects Quinn worked on.

Barbalunga declined to say who he was voting for in the Berkshire District Attorney race. While he said he worked on incumbent Tim Shugrue’s failed 2004 campaign for DA, he “will support Andrea every day of the week while she’s in office.”

“I will never publicly say I’m supporting Tim or Andrea, because it burns bridges,” Barbalunga said.

But he added that “if Tim were to lose and Andrea Harrington stays in office, my office will still continue to work with her office.”

The candidates were afforded a moment to tell voters why they should vote for them in the Sept. 6 primary election, when voters will decide who will receive a six-year term as sheriff in Berkshire County, where there is no Republican candidate on the ballot.

Barbalunga said he will direct money to rehabilitation, will support women, promote cultural diversity, and serve a maximum of two terms in office if elected. Bowler touted partnerships his office has with local institutions, fire departments and EMS, and his experience in law enforcement.

Though he retired as superintendent of the Berkshire County Jail and House of Correction in early 2021, Jack Quinn stayed on to see out a pair of projects he helped shape. Quinn’s work earned him more than $70,000 from grants and other funding over parts of two fiscal years, in addition to a yearly pension worth $118,461 this year.

The Berkshire branch of the NAACP and blogger Dan Valenti planned to host separate forums with Berkshire District Attorney candidates Wednesday. Now, the NAACP debate has been rescheduled — ending a dispute over how the campaigns should handle a scheduling conflict.

Rivals in Berkshire sheriff's contest let the accusations fly. 'Woefully misinformed,' one says. 'A sheriff not equipped to do the job'

Broad accusations continued to characterize jousting Monday between two candidates for Berkshire County sheriff, in a debate that showcased their disagreements ahead of the Sept. 6 Democratic Party primary.

Thomas Bowler: 'I want this to be a stronger, safer community'