SPRINGFIELD — Lawyers for the Springfield diocese failed to persuade a Supreme Judicial Court justice to delay action on a lawsuit brought by a former altar boy sexually abused decades ago by a bishop.

In a ruling late last week, Associate Justice David A. Lowy denied a motion by lawyers for the diocese and other defendants to halt proceedings in the case, saying the plaintiff “has a right to expeditious resolution of his case.”

Lowy’s decision, which came Friday, follows earlier moves by a Hampden Superior Court judge as well as a single justice of the Appeals Court to allow the case to be tried, even as the diocese’s lawyers prepare to argue, among other things, that the court system lacks jurisdiction due to the First Amendment’s doctrine of church autonomy.

The plaintiff is a Chicopee man around the age of 70 who is identified only as John Doe. He sued the diocese and others in February 2021 alleging brutal sexual assaults by former Bishop Christopher J. Weldon and other priests and claiming that diocesan officials mishandled his initial 2014 report of that abuse.

“The defendants have not identified any case suggesting that it [has] an immunity from suit.”

In June 2020, a retired judge hired by the diocese spent a year looking into the man’s claims and found them to be “unequivocally credible.” That judge, Peter A. Velis, cited evidence that the diocese worked to conceal the late bishop’s history of abuse. Weldon’s name was added to the list of credibly accused clergy that month.

In December, the SJC on its own opted to consider legal issues relating to whether the church is protected from the man’s claims.

The full SJC will still hear a defense motion on wider legal issues, including a claim by the diocese’s legal team that the church is protected by what’s known as common law charitable immunity.

It fell to Lowy to weigh the merits of the motion to stay proceedings in the Superior Court. In his decision, the justice found it lacking on several matters of law, including in regard to the concept of charitable immunity. 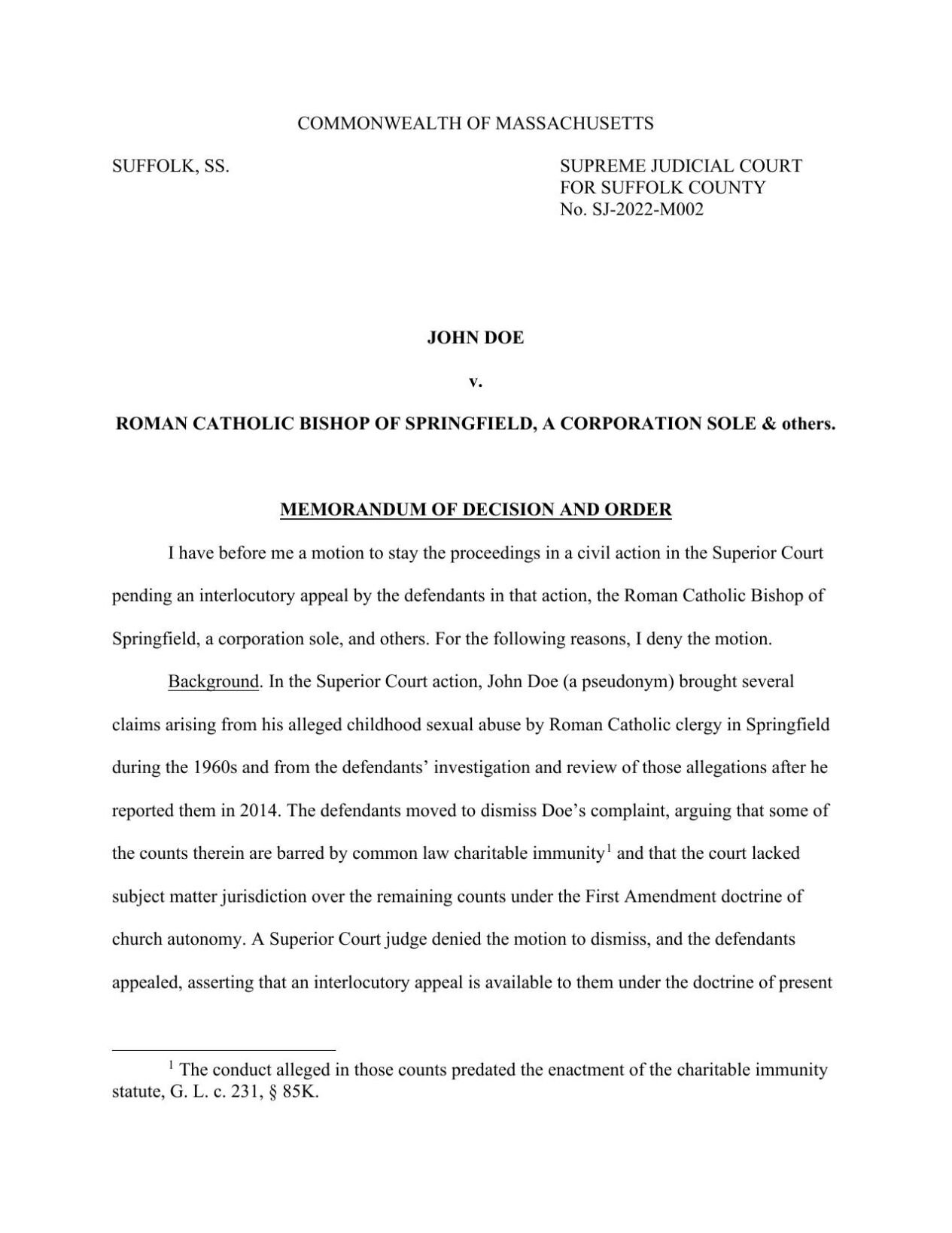 “The defendants have not identified any case suggesting that it [has] an immunity from suit,” Lowy wrote.

The justice said that in his view, any possible harm done to the defendants, and to “the public interest,” does not “tip the balance in favor of a stay.”

Lowy acknowledged that the defendants will have to cover the cost of ongoing litigation, including pre-trial discovery.

“These are merely the ordinary expenses of litigation,” Lowy wrote. “On the other side of the balance, granting a stay will delay resolution of Doe’s claims until the full court disposes of the interlocutory appeal.”

“While I do not expect that to be a delay of more than a few months, it is nonetheless time that Doe cannot get back.”

Judge Karen Goodwin has set a final pretrial conference for June 30 in the Superior Court case.

The diocese and most defendants are represented by the Springfield law firm Egan Flanagan and Cohen.

The plaintiff is represented by Nancy Frankel Pelletier and David S. Lawless of Robinson Donovan in Springfield.