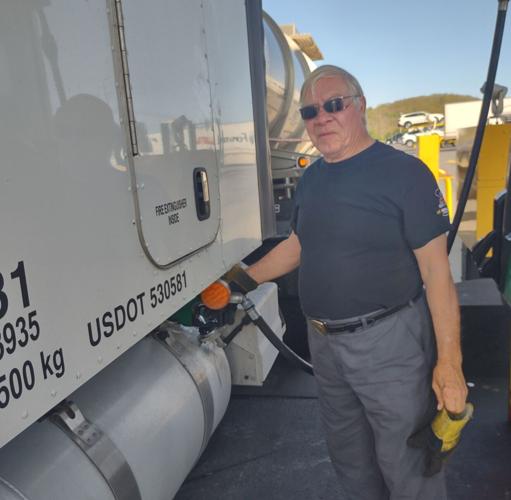 Dennis Berlett, from Ontario, Canada, fills up his tractor trailer at the Love's Truck Stop off the New York State Thruway in Canaan, N.Y.  The trucker of 50 years says his diesel fuel costs have more than double in recent weeks. 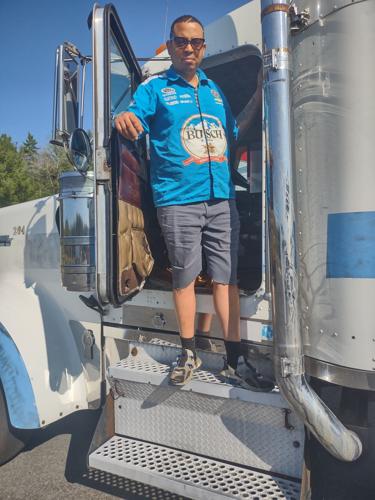 Trucker Titus Johnson from Chicago makes a pit stop at the Lee Plaza on the Massachusetts Turnpike before heading home. Johnson says his cost of running his rig has doubled, while the rate of pay for the independent trucker has been going down.

Dennis Berlett had a flashback to his younger days, as he filled up his 18-wheeler. The truck driver had pulled into Love’s Truck Stop off the New York State Thruway on Thursday morning to fill up with diesel at $6.48 per gallon.

"It's going to get worse before it gets better."

The 70-year-old veteran of over-the-road hauling, who hails from Kitchener, Ontario, was going to spend more than $1,400 to fill his two, 110-gallon tanks.

Any business that uses diesel to move cargo, even locally, is hurting these days.

John Goerlach, owner of John’s Excavation in Lanesborough, has 45 vehicles on the road, half of which fuel up with diesel. He said he stocked up on 1,000 gallons of diesel for a locked-in price totaling $6,200.

Goerlach said diesel costs are felt by the people who hire his business. “One excavator costs $30 an hour more to operate and that cost gets passed along to the customer,” he said. “It’s going to get worse before it gets better.”

AAA Northeast says diesel in Massachusetts is averaging $6.29 a gallon — more than double a year ago. In New York, the auto club’s most recent survey finds diesel in the Empire State at $6.38 per gallon — a record high.

“With the cost of oil accounting for more than half of the pump price, more expensive oil means more expensive gasoline,” said Lloyd Albert of AAA Northeast. “Prices have now moved past those record-high levels of early March.”

In Adams, Scott Grant of Scotty’s Trucking has had to add a fuel surcharge to his bills. Grant operates a flat-bed tractor trailer hauling heavy construction equipment, such as payloaders.

The business serves 75 to 80 regular customers. It is now affixing a surcharge of $32 an hour for fuel, atop the regular hauling rate of $120 an hour.

“I haven’t lost any business because of the surcharge and no one has questioned it. My guess is they are passing the cost on to their customers,” he said.

Grant expects the surcharge to remain in effect for the rest of the year. He doubts the price of diesel will drop below $5.

Other Berkshire trucking companies are trying to avoid price hikes due to the price of diesel.

Kyle Delmolino, of Delmolino and Sons in Cheshire, says it is business as usual, while managers rethink logistics.

“We’re being more creative with our work. For example, if we have work in New Ashford, we try and do it in one trip,” he said.

"We're being more creative with our work. For example if we have work in New Ashford, we try and do it in one trip."

“We have gone up in price with our roll-offs when we go to places like Rowe or Becket, because we haul our waste to Pownal [Vt.],” he said.

In Lee, Department of Public Works Superintendent Al Zerbato said the spike in fuel costs was expected, and he budgeted for it.

“We’ve increased our fuel costs by 20 percent across the board, but it’s a cost we can absorb,” Zerbato said. “The bigger cost for us is the repair of our vehicles and getting parts for our trucks.”

In order to avoid paying the more than $6 per gallon price at one of Lee’s gas stations, Zerbato gets delivered 275 gallons of diesel pumped into a storage tank costing $5 a gallon.

Berlett, the trucker from Canada, says he’s now spending $1,000 when he refuels, compared to $500 to $600 a few months ago. “I haven’t seen it this bad in my 50 years of trucking — and that includes the oil embargo of the 70s and that was due to a shortage of fuel,” he said. “This is a price hike problem.”

Berlett is not only getting soaked at the pump, the fast food eateries he stops at along his route have priced their menus sky high. “Last night I spent $14 on a Big Mac at McDonald’s. You can’t find a good restaurant anymore on the toll roads,” he said.

Berlett was among several truckers The Eagle spoke with on Thursday about skyrocketing diesel prices, which are straining over-the-road haulers’ budgets.

Things are worse in Canada, according to independent trucker Don Martin of St. Catharines, Ontario. He stopped at Love’s after making a delivery to Schenectady N.Y., and doing a pick up in Albany, N.Y.

“We have litres which are less [in volume] than gallons at about the same price, so do I fill up in Canada? No. It’s cheaper to fill up here,” he said.

Whether Canada or the United States, the high cost of diesel has Martin cutting back on other expenses.

“I won’t give up on maintenance of my cab. I look around for discounts on service or parts, but I have cut back on my personal travel,” he said.

At the Lee Plaza rest stop on the westbound side of the Massachusetts Turnpike, Kentucky-based independent trucker Tim Jessie says the rising costs of hauling have him contemplating retirement after 36 years on the road.

“I know of truckers back home who have parked their trucks saying it’s not worth it. I’ve thought about doing that, but I still have to make a living,” he said.

Jessie’s fuel costs for round trips from southern Ohio to the Northeast have risen from at least $1,200 to $1,800 or more. He has to find ways to save. “I try not to spend like I used to when I’m on the road and I don’t let my truck idle as much to save fuel,” he said.

Titus Johnson, an independent trucker from Chicago, pulled into the Lee Plaza getting ready for his return trip to Chicago. He had stopped in Northampton to pick up a full load of Coca-Cola products.

“It used to cost me 50 to 60 cents a mile to run my truck, now it’s more than double that. Also, the rate in which I get paid to haul has dropped, so I’m making less money and spending more,” he said.

To save money, Johnson has become his own mechanic. “I’m doing more maintenance on my truck, not taking it into the shop as much,” he said.