John Broderick IV has completed his Marine boot camp duties at Parris Island in South Carolina, pictured, and is in training for the Marine Security Guard at Camp Geiger, part of Marine Corps Base Camp Lejeune in North Carolina. 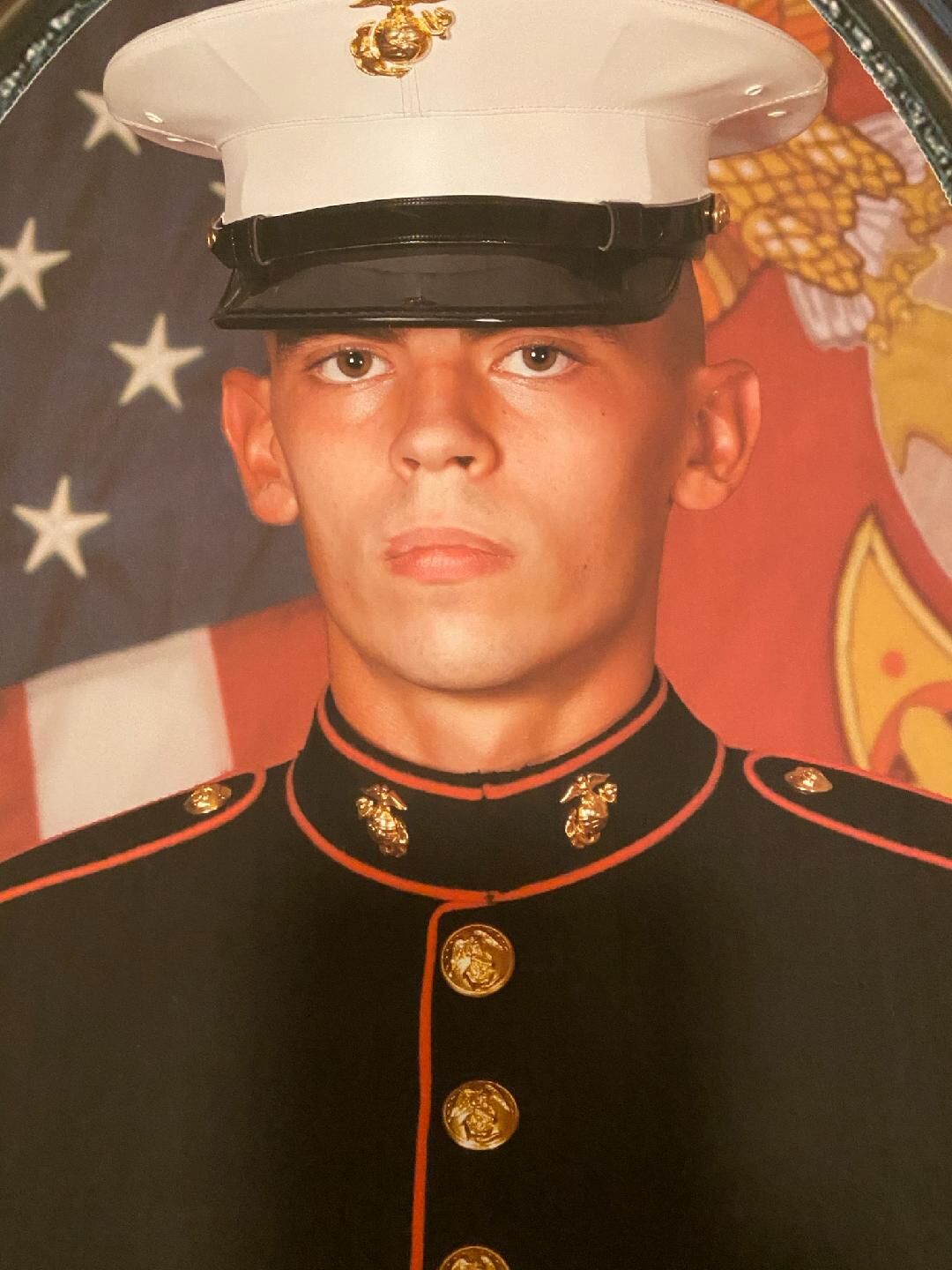 “Ever since I was little, I would see my Dad in uniform and want to be a Marine,” says John Broderick IV, shown in his dress blues for graduation.

GREAT BARRINGTON — Defending democracy is in the Broderick family blood.

John Broderick IV always knew he would continue the military legacy dating to World War I. A family photo shows the now-19-year-old from Great Barrington wearing a digital Marine uniform in kindergarten. He is sitting on a classroom floor, using 12-inch rulers to make the letter “M” — possibly for “Marine”?

Broderick grew up watching his father, Marine Lt. Col. John Broderick III (ret.), twice be deployed as a reservist to Iraq, including the initial invasion of the Middle East country in 2003, in the aftermath of the 9/11 attacks.

Now, the younger Broderick has completed his Marine boot camp duties at Parris Island in South Carolina, and is in training for the Marine Security Guard at Camp Geiger, part of Marine Corps Base Camp Lejeune in North Carolina.

The Marine Security Guard provides security details for U.S. embassies and the president. Broderick has a five-year contract with the Marines, he says, that could turn into a career.

“Ever since I was little, I would see my Dad in uniform and want to be a Marine,” Broderick said in a phone interview before he began his stay at Camp Geiger. “I feel proud about doing this; [my family] motivates me.”

The elder Broderick is confident that his son will do well in the Marine Security Guard.

“I think he could go far in the Marines. He has the potential, and he’s very smart,” the father said. “He’ll get to travel and learn what the world is really like.”

The Broderick military legacy begins with the younger Broderick’s great-grandfather, who served in the British army during World War I. He fought and survived the Battle of the Somme, one of the longest and most deadly conflicts of the war, from July 1 to Nov. 18, 1916.

Next came his paternal grandfather’s brother, John Nielson, of Great Barrington, fighting for the Americans in the Battle of the Bulge, the last big conflict of World War II in Europe.

John Broderick III was next, serving 27 years in active duty and reserves in the Marines.

A highly decorated uncle from Lee, Jeffrey Simmons, served in the Army during the Vietnam War, surviving a deadly shootout with the enemy as six soldiers died around him.

When it came time to enlist, the younger Broderick had no problem persuading his father to let him go.

“I was always hoping he would enlist to carry on the family tradition. Military service is such an honorable vocation,” the elder Broderick said.

And, at times, a horrific vocation.

It’s one reason why Lori Broderick wasn’t keen on her son putting himself in harm’s way. Mom was stationed at a U.S. hospital in Germany, treating the wounded from the first war with Iraq, in 1990-91.

“She was a medic in the Army during Desert Storm and saw the worst of things,” the younger Broderick said.

The younger Broderick’s high school years might have laid the foundation for a potentially successful military stint. The graduate of Monument Mountain Regional High School ran cross-country and competed on the track team — a team captain his junior and senior years.

The interscholastic athletics were good for building teamwork, which comes in handy in the Marines.

“One day we’ll be fighting together and we’ll need to work together,” he said.

As for the best fatherly advice?

“He told me to do as your told, be the best you can and as accurate as you can. It definitely helped with boot camp,” the son said.