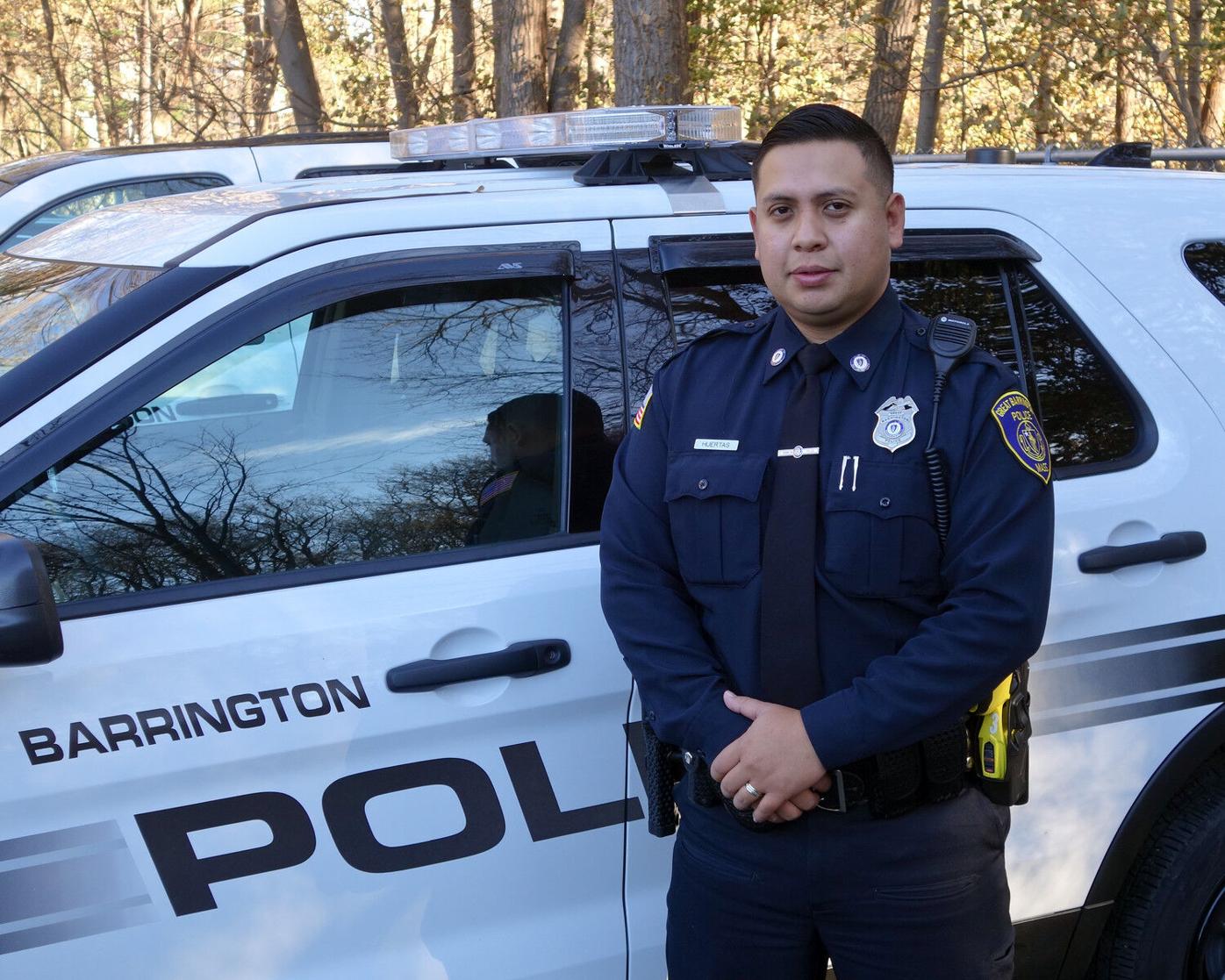 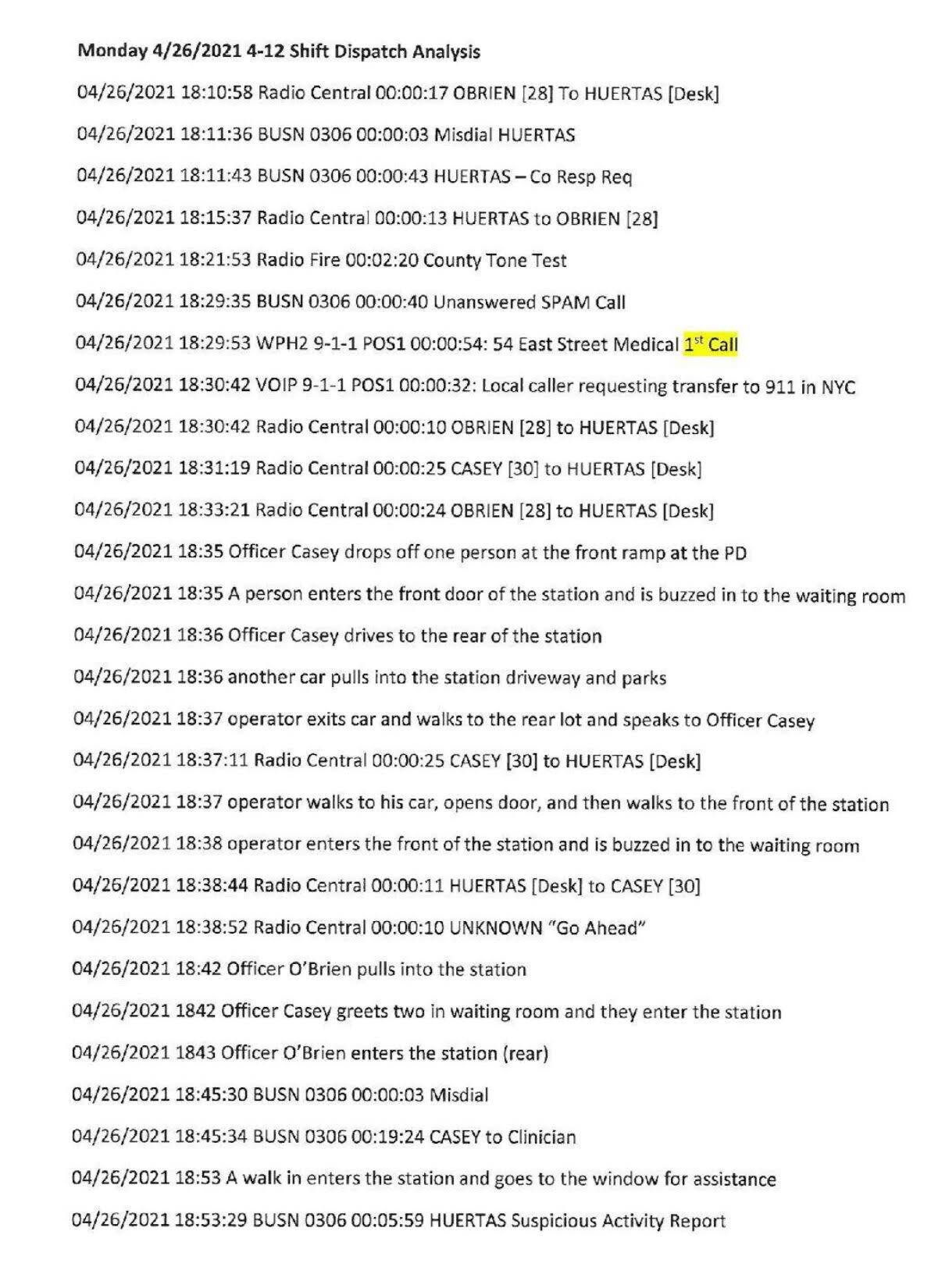 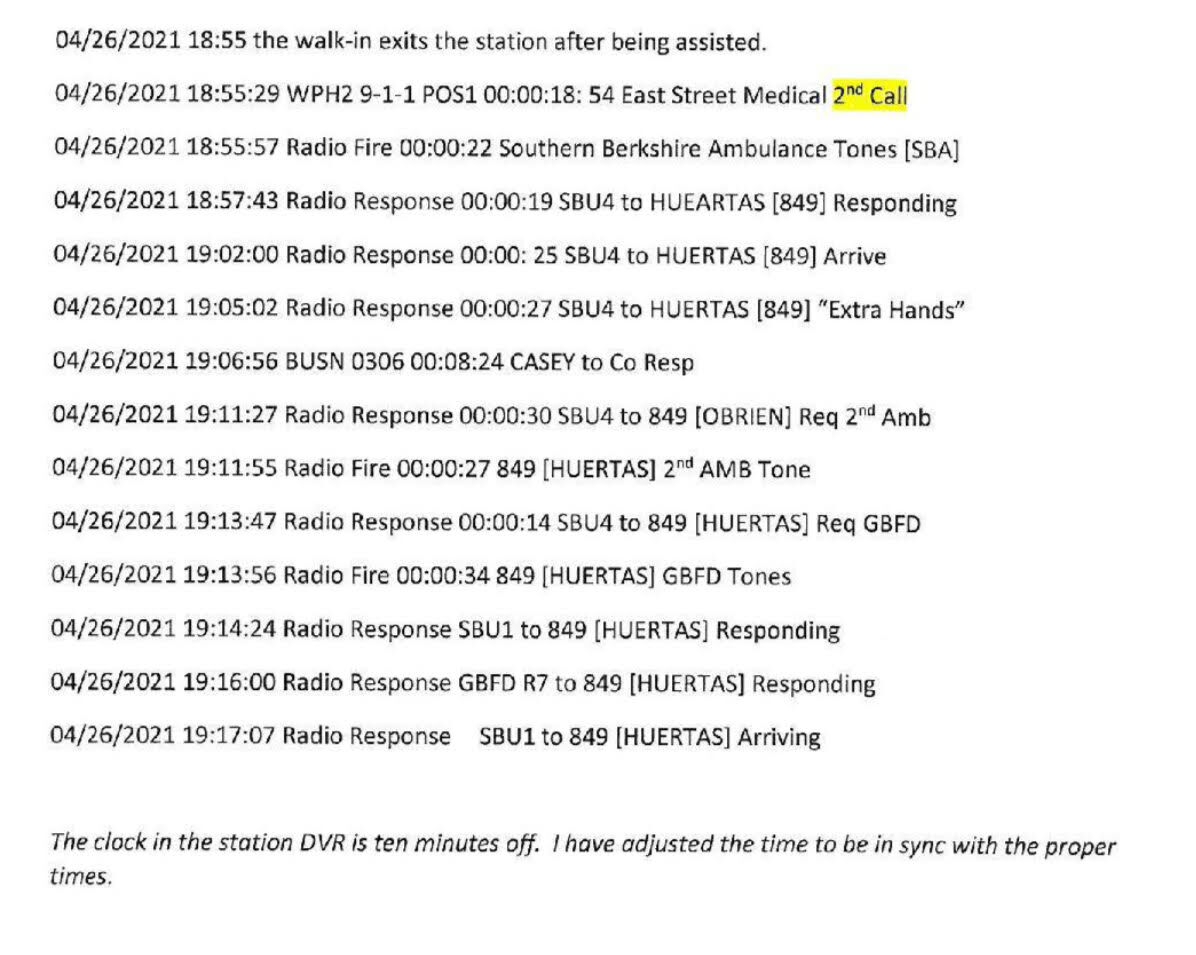 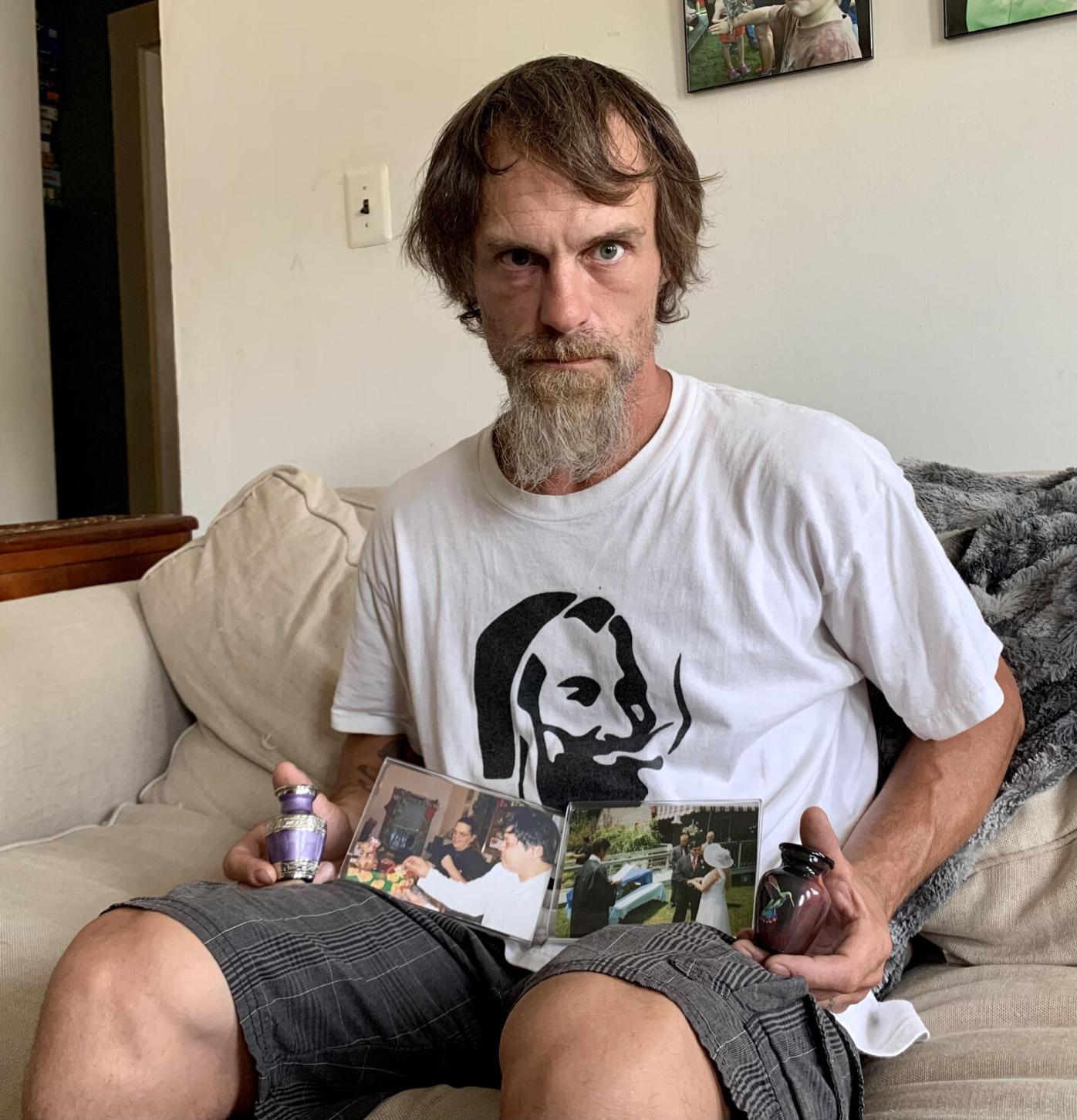 GREAT BARRINGTON — A police officer who delayed dispatching an ambulance for more than 25 minutes said he had been distracted in the station’s 911 communications center when that call came in, an internal investigation says.

Officer Andres Huertas was disciplined with temporary suspensions, according to documents related to a probe of the episode, obtained by The Eagle.

In a memorandum about the flawed April 26 dispatch, Huertas told Great Barrington Police Chief Paul Storti that at the time of the call for an ambulance to East Street to assist Luis Del Mar, he was fielding other calls in the dispatch hub, as well as letting people into the lobby at the Main Street station. Del Mar had been struggling for breath and died that night.

“I received other phone calls and radio transmission that caused me to get distracted from dispatching the first 911 call,” Huertas wrote, addressing why he did not act until a second call came from Del Mar’s stepson seeking help.

Del Mar, 66, had been released from Berkshire Medical Center on oxygen a week earlier after a bout with COVID-19. Both he and his wife, Anita Del Mar, had extensive health problems, and were hospitalized together a month before. She died in the hospital three weeks before Luis began to struggle at their apartment on East Street.

The man’s sisters, who had come to help, called Anita’s son, Glen Fusco, who rushed to the apartment and called 911 at 6:29:53 p.m. on April 26, and reached Huertas. Huertas did not dispatch the ambulance until 6:55:57 p.m., after Fusco called a second time.

Fusco says that it was after this second call that Del Mar deteriorated further, unable to breathe, and the family began performing CPR. By 7:11:55, an ambulance dispatcher asked Huertas for more units, and said Del Mar was in cardiac arrest.

Huertas sent the ambulance to the wrong house number — 34 East St. instead of 54 East St., and this wrong address was later repeated by ambulance dispatchers. Paramedics had started unloading their equipment when Fusco ran down the street to wave them down, according to the documents.

One paramedic told police he thought this particular delay “had no impact on the outcome of the call,” given Del Mar’s medical condition. Paramedic Jeremy Vandeusen had arrived to the scene to find Del Mar not breathing and without a pulse.

A ‘leader and mentor’

The internal investigation reports also show that Huertas’ Emergency Medical Dispatch certification is current through 2022, with a 90 percent score on his last exam in 2020 because he answered five questions incorrectly. He failed a 2016 certification test, but passed with 100 percent later that year.

According to the investigation, Huertas must complete 40 hours of emergency dispatch training in lieu of his regular shifts.

An April 12 performance review conducted by Storti rated Huertas as “Accomplished” or “Distinguished” in most areas except three, including “Desk Duty and Dispatching,” for which Huertas received a “Competent” rating. Storti made one note: “Andres is turning into a leader and mentor within the department.”

Huertes, 27, was hired part-time in 2015 and rose to full-time status in 2017. He had one disciplinary mark in his file for misusing a sick day that year.

Storti placed Huertas on paid administrative leave April 29 and began the dispatch delay investigation, in which he found that Huertas made four violations of medical dispatch rules.

In a contract between the town and the police union, in which both parties agree they won’t appeal or take legal action related to the case, Huertas received 10 days of unpaid suspension, and suspension from details and overtime shifts for three months, “unless otherwise directed by the Chief of Police.”

From 6:10 to 7:17 p.m. that evening, the communication’s center at the station had 42 calls, visitors and other events, according to a log.

In a report, Officer Joe O’Brian wrote that he and Officer Elias Casey had just returned from a domestic/mental health disturbance call that Huertas had dispatched around 5:30 p.m. The call resulted in one of the parties in that incident returning to the station with police at 6:37 p.m.

“While also in the station just previous to the East (Street) call I hear numerous phone calls come in and Ofc. Huertas making [an] ambulance and fire department dispatch for a medical call on East St. I also assisted a person who walked in the station to file a report about a lost cell phone,” wrote O’Brian, who then went to the East Street apartment, since a death had occurred, and took a complaint from Fusco over the delay.

Officer Casey, in his report, said he stepped into the 911 hub to speak with Huertas about the domestic call. “I recall hearing phones ringing, and Officer Huertas receiving and dispatching calls over the radio,” he wrote.

In Fusco’s second 911 call, he asks why an ambulance hadn’t arrived. Huertas says he would “send them right now,” and when Fusco asked whether they had been sent before, Huertas says, “I did, yes — I’ll send them again.”

Storti said he could not comment on the incident or the investigation of it. He said it remains a personnel matter and is an open investigation by the Berkshire District Attorney’s Office.

Berkshire District Attorney Andrea Harrington previously said State Police detectives attached to her office are further probing the episode. Her office has ordered an autopsy by the state medical examiner.

Fusco said he has had fruitless conversations with police and the DA’s office about why Huertas delayed the dispatch. He has worried that his 2018 arrest by Huertas and another officer on a warrant and for operating under the influence played a role in the mishandled call. He continues to fight that OUI charge in court.

Fusco said that, in May, he gave a statement to detectives with Harrington’s office and they explained that there was no criminal investigation underway regarding the delay in dispatching an ambulance. Instead, the inquiry focuses on whether there was no foul play in Del Mar’s death.