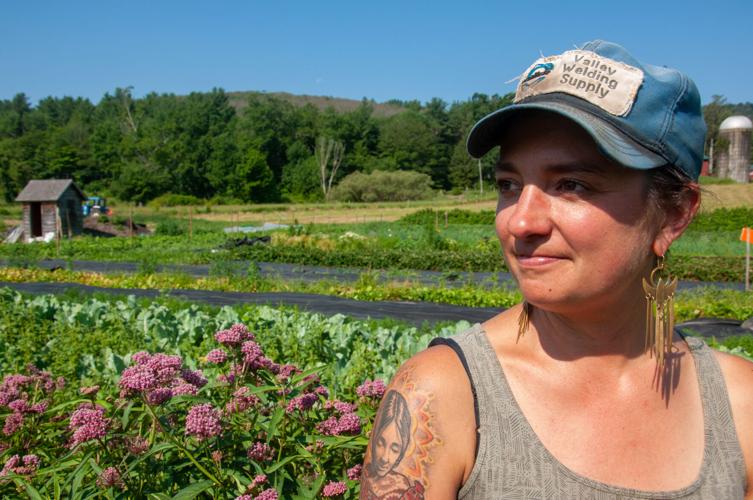 “I literally can’t go out and slap down a few hundred grand to buy land for an organic vegetable farm. The economics aren’t there,” says Molly Comstock of Colfax Farm, which feeds more than 250 customers weekly through farm shares, a farmers market, and through sales to stores and restaurants. Comstock’s lease is up at the end of this season, and it will not be renewed. 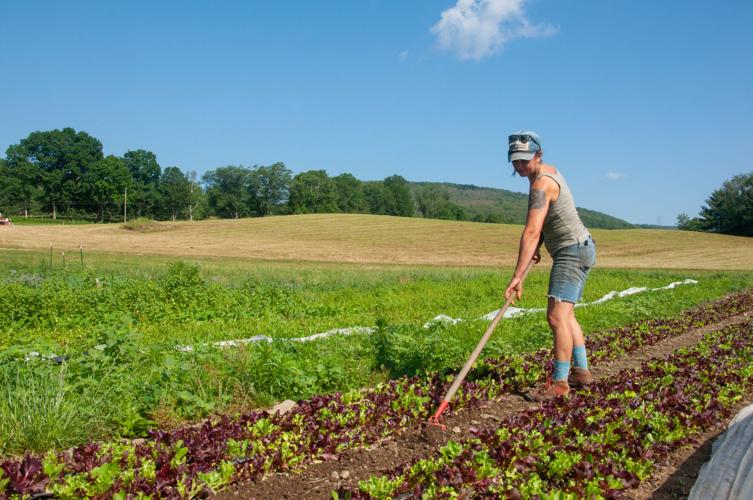 “I plant seeds, it grows food, and it makes people happy,” says Comstock, who founded Colfax Farm in 2014. She is looking for a permanent home for her farm, which operates under the Community Supported Agriculture model. 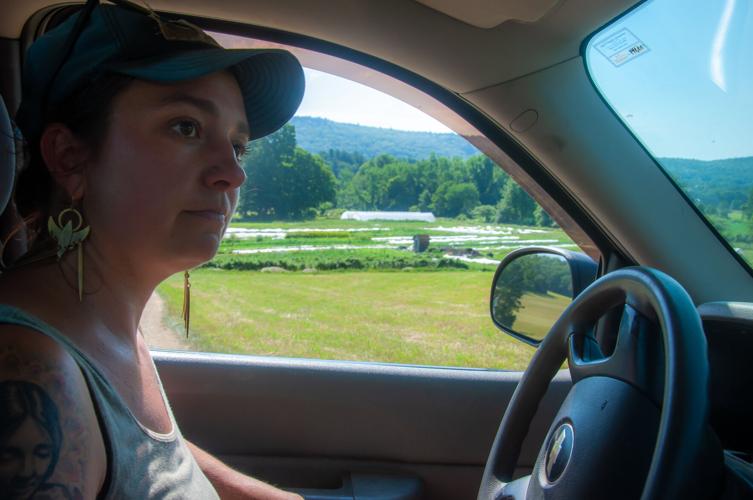 “Local farmers could feed this county. We have the demand and we have the know-how,” Comstock says. “But, yes, we do have to care for land and the people who provide it.”

ALFORD — Molly Comstock’s dirt-stained, daily to-do list — on what needs seeding, what needs harvesting — makes no reference to the most pressing matter before her: that a farmer needs roots.

Yet, here she is, planting seeds, harvesting crops — and about to lose her farm at the end of this growing season. A soil toiler in these Berkshire Hills, she is poised to be uprooted again.

“Nomadic,” says Comstock, 42, as if to take a mirror to herself atop the wobbly wagon that brought her to this precarious point. “I wish there was a different word.”

An email sent out by one of her customers June 25 had the subject line “Help Save Colfax Farm.” Though appreciative of the gesture, Comstock is a farmer, not a beggar. She saw the email and, at first, wanted only to crawl into the dirt and disappear, maybe reemerge as some anonymous flower, bright and beautiful, oblivious to the world of economics and ownership.

But, in the Berkshires, where locally grown food and the lovely land upon which it’s cultivated remain elemental characteristics, Comstock is now a reluctant test case for the degree to which people here care about farms and, by proxy, the farmer.

As for this particular farmer, the land she has been leasing on West Road here will not be available to her next year. The soil she has midwifed since 2018 — prodding with a Broadfork, amending and now as spongy as chocolate cake — well, she doesn’t own a speck of it.

She founded Colfax Farm in 2014, first at a friend’s place in East Chatham, N.Y., and then on borrowed land in West Stockbridge. A lack of a water source on that site proved a primary reason to move her operation to Alford in 2018, on about 3 acres within the beautifully kept farm owned for generations by the Wilcox family on West Road.

“Ray Wilcox let me build a greenhouse and use a barn and set up a farm store,” says Comstock, who now has one full-time employee and several volunteers. “Ray has been unbelievably generous.”

But, her lease is up at the end of this season. It will not be renewed. When contacted by phone this week, Wilcox declined to comment.

Comstock drives an old Chevy pickup with squeaky suspension. She has a tattoo of Johnny Cash on her leg, among others — all representative of sacred fixed points in her life. One is a quote her mother had cherished from the writer Flannery O’Connor: “You shall know the truth and the truth shall make you odd.”

The odd has become terribly obvious. Belying the beautiful and bountiful crops Comstock is harvesting this summer, the terrible truth is this: “I need help,” she says. “It’s a big ask.”

John Fulop, board president of the Berkshire Community Land Trust and self-appointed beggar-in-chief on behalf of Colfax Farm, has no qualms about doing the asking.

“We have to build up our agricultural resources in this end of the country, particularly in Berkshire County,” he told me. “We have so much land that could be used for agriculture. We’re not going to be able to depend on Florida or California much longer. They are in dire straits. They have a drought. A lot of their farms are closing down. The agricultural component is crucial for us to remain a vibrant community.”

Part of the equation, he says, includes Comstock, whose Colfax Farm now feeds 120 farm share customers once a week, 25 weeks a year, and about the same number of customers through the West Stockbridge Farmers Market. She also sells to stores and restaurants.

Fulop says he legitimately is hopeful that people in the community can pull together, that a tax-deductible land donation could be secured.

If the situation were all to be summarized in a personal ad, it would read something like this: Energetic, single farmer seeks 5 to 10 acres of open land, preferably in the West Stockbridge and Alford area. Must have access to water and electricity. Needs a dwelling, too, to sleep in. No frills. Must all come cheaply — as in, kind of free or thereabouts. Call Molly, 607-743-8190.

“This all makes me uncomfortable,” Comstock says, pulling at the bill of a farm-tarnished, sky-blue ball cap half a century old. The cap belonged to her father, Robert (middle name, Colfax), and has a patch sewn onto it advertising his welding business. He died in 2007.

Comstock’s mother, Pamela, at one point managed to wrestle the cap from his head long enough to secure the bill, which was falling off. You can still see her stitching, careful and neat, using thread whose color was close enough. Pamela died in 1999.

On her left arm, Comstock has a tattoo of her father bent to the task of angle grinding, sparks flying. On her right arm, her mother, holding a hen. Pamela, an early, horrified reader of food labels, would grow most of the vegetables the family ate from their patch of earth in rural Deposit, N.Y., east of Binghamton near the Pennsylvania border. Comstock grew up eating parsley by the handful.

All told, her tattoos tie in with those transcendent moments she sometimes experiences — that most farmers report experiencing — when the doubts abate, when the load is rendered light, when one’s life harmonizes with the tune of creation. For Comstock, for obvious reasons, those moments have not come this season.

In the meantime, living in a vintage 1960s trailer set on a bluff behind a barn, Comstock overlooks her organic farm — her orderly, colorful vegetable rows set along an enchanted brook in a lusty, fairy-talelike valley. Footpaths of clover frame various sections. The sections are marked with painted signs in Spanish that translate into “Dream” and “Hope” and “Sky” and “Soul” and “Smile.”

She has allowed exactly one row of vegetables — parsnips — to turn to seed, as if to tie a string around a finger, a reminder. She will not be here next season. She must begin to leave things ungoverned.

The effort to save Colfax Farm is not the first of its kind. Perhaps the most famous, from a generation ago, is that of Indian Line Farm in South Egremont, one of the nation’s first Community Supported Agriculture farms, protected through a coalition of local residents.

Comstock participated in an online forum June 30, on the future of her farm, hosted by Berkshire Community Land Trust board member Rob Putnam that included Elizabeth Keen of Indian Line. Comstock is appreciative that people care enough to reach out to her.

A farmer needs roots, after all. For now, for Comstock, those roots have felt reduced to the size of a blue ball cap, the one that belonged to her father, the one repaired by her mother.

“I wear it because it brings me a lot of strength and comfort,” she says. “I need it.”

She tugs upon the bill. The stitching holds firm.

EGREMONT — Elizabeth Keen stands in a muddy tire rut near a greenhouse fragrant with basil and unripe tomato plants, talking with the state’s …

A pandemic, lockdowns and inflation expose fragile food-supply systems. Great Barrington is looking to fix that

The food-supply chain is shaky, the coronavirus pandemic revealed. Great Barrington is beginning a project that would help more people grow healthy food, and afford to buy it.

The Harry Conklin Fund for Farmsteads, a project of the Berkshire Community Land Trust, is hosting a fundraiser concert series this summer to help save Berkshire farmland and find a new home for Comstock and Colfax Farm.