GREAT BARRINGTON — The buyers of two condominium units in Powerhouse Square are asking the town to hold them harmless for the developer’s more than $200,000 in unpaid property taxes, and the town is refusing.

In a memorandum of understanding proposed last month, an attorney for one of the buyers in contract with Powerhouse is asking the town to release two of the units from liability for back taxes that then amounted to $232,000. The bill is now at just over $214,000, after recent payments, according to town Tax Collector and Treasurer Alicia Dulin.

The problem is holding up these two sales in the 22-unit condo and retail complex on Bridge Street that houses the Berkshire Food Co-op, which filed suit against Powerhouse in Berkshire Superior Court last summer for not living up to promises and for construction that has been a “disaster,” according to the complaint.

The proposed contract also stipulates that proceeds from these two sales go toward the taxes. Of the two buyers who asked for indemnity from the town, one is in contract for $385,000; the other for $550,000.

Dulin said local developer Benchmark Development’s delinquency began in November 2019 and consists of one tax bill of $5,780 from 2020, and that this can go into tax title within the next few weeks. Three 2021 tax bills amounting to $208,335 can’t go into tax title until 14 days after demand notices are sent. The company has accrued about $10,000 in total interest on the unpaid bills; this now stands at $5,000.

Town Manager Mark Pruhenski said he refused to sign the memorandum because it doesn’t help the town to create an exemption.

“Just like every property owner in town — if they go over a year without paying, their property goes into tax title,” he said. “We’re not treating them any differently than any other taxpayer that owes us money.”

The developer did not approach the town to clear up the back taxes, Pruhenski said.

Peter Puciloski, the attorney who drafted the hold harmless proposal, explained what this might mean for the buyers. He said the developer’s bank can demand the money from these proceeds, since the bank is now in control. If the town takes the property, it will include the units and common areas, since the delinquency began before the condos were legally declared in March 2020.

“I’m worried about it, that’s why we haven’t closed,” Puciloski said. “We’ll walk away if there’s no resolution soon.”

Yet a tax-taking might help the buyers, who could then get the deed from the town, and the town would get the proceeds, he said.

Michael Charles, principal of Benchmark along with Brian Cohan, said they are working to pay the taxes but declined to comment on the reasons why the company is in arrears. He said they are “ultimately not concerned.”

A few units are available in the building, and most have sold, Charles said. The coronavirus pandemic, while initially slowing sales in the building that was completed in 2019 and ready for occupancy in March 2020, soon led to sped-up sales, as people relocated from cities to work remotely in the Berkshires, he added.

“People who planned to come later, to retire, came earlier and are living there now,” Charles said.

Southern Berkshire Registry of Deeds records show an increase in mortgages for units in 2021.

Several retail and office spaces along the street are empty, though, because of the economic slowdown, Charles said. The pandemic has not stopped plans for Benchmark’s second, 27-unit complex on the same campus, but it has delayed it because of the COVID-induced spike in lumber prices.

The company likely will break ground at the end of this year or in early 2022, he said, noting that it has “a few reservations” for units.

Benchmark transformed the top of Bridge Street in 2018 by razing two buildings, creating parking and sidewalks, and building a retaining wall at abutting Memorial Field. Benchmark estimated early on that revenue for the entire development, once completed, would send about $400,000 into town coffers.

The company came under fire last year for breaching part of a larger agreement with the town — it was forged from conditions on its special permit — to install a new backstop, dugouts and baseline fence areas at Memorial Field by Dec. 1, 2020, in exchange for using the field’s road for access to the land on which it will build the second building. 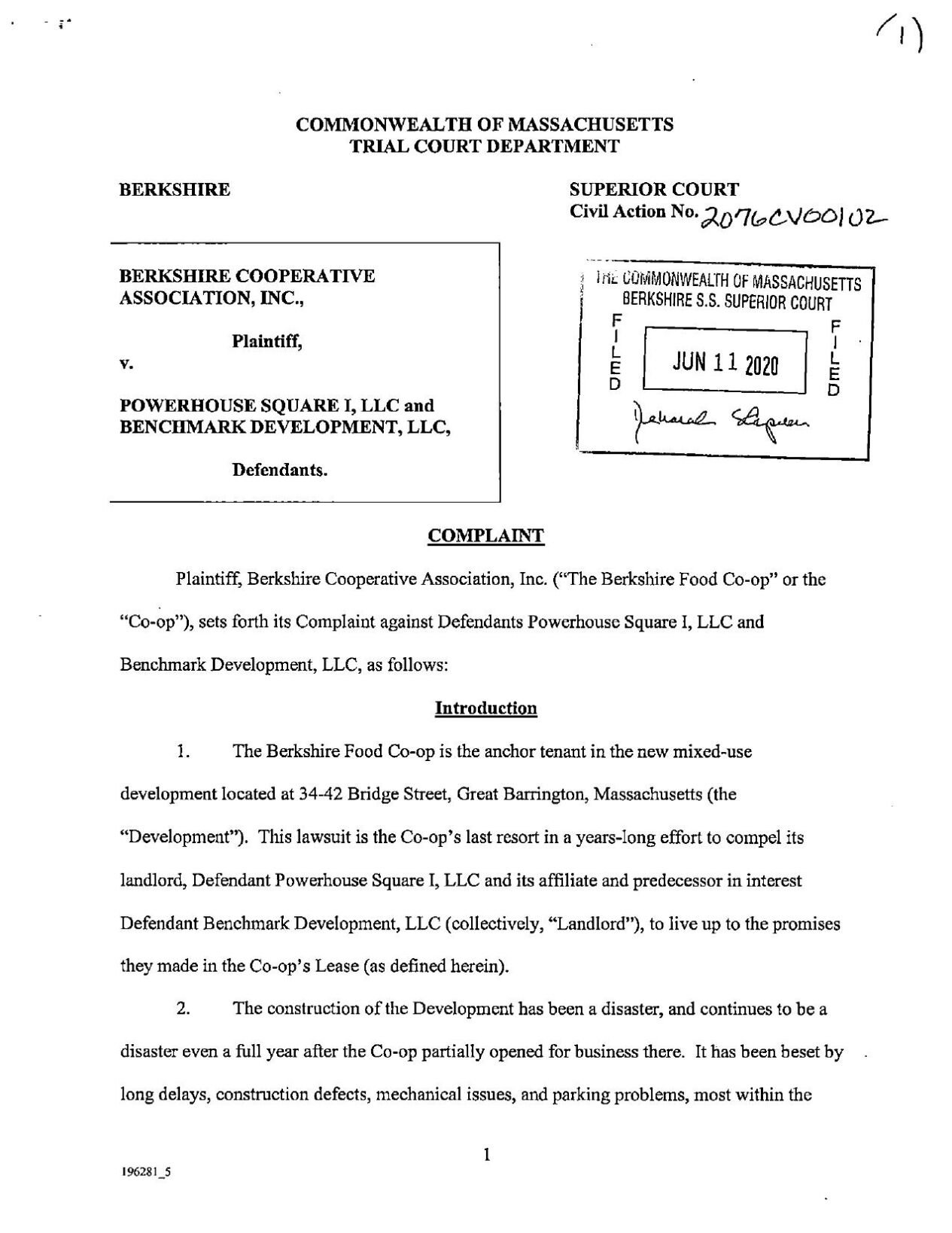 In its court complaint, the food co-op is asking for double and treble damages on seven counts that include misrepresentation, constructive eviction, breach of contract and breach of covenant. The co-op alleges lengthy delays, construction defects that have led to leaks, mechanical problems, and most importantly, parking lot issues. The complaint calls the developers “incompetent project managers, undercapitalized developers, and liars.”

Charles did not return a second call to him about these and other claims.

Firm says it will pay back taxes for Great Barrington complex, blames town for error