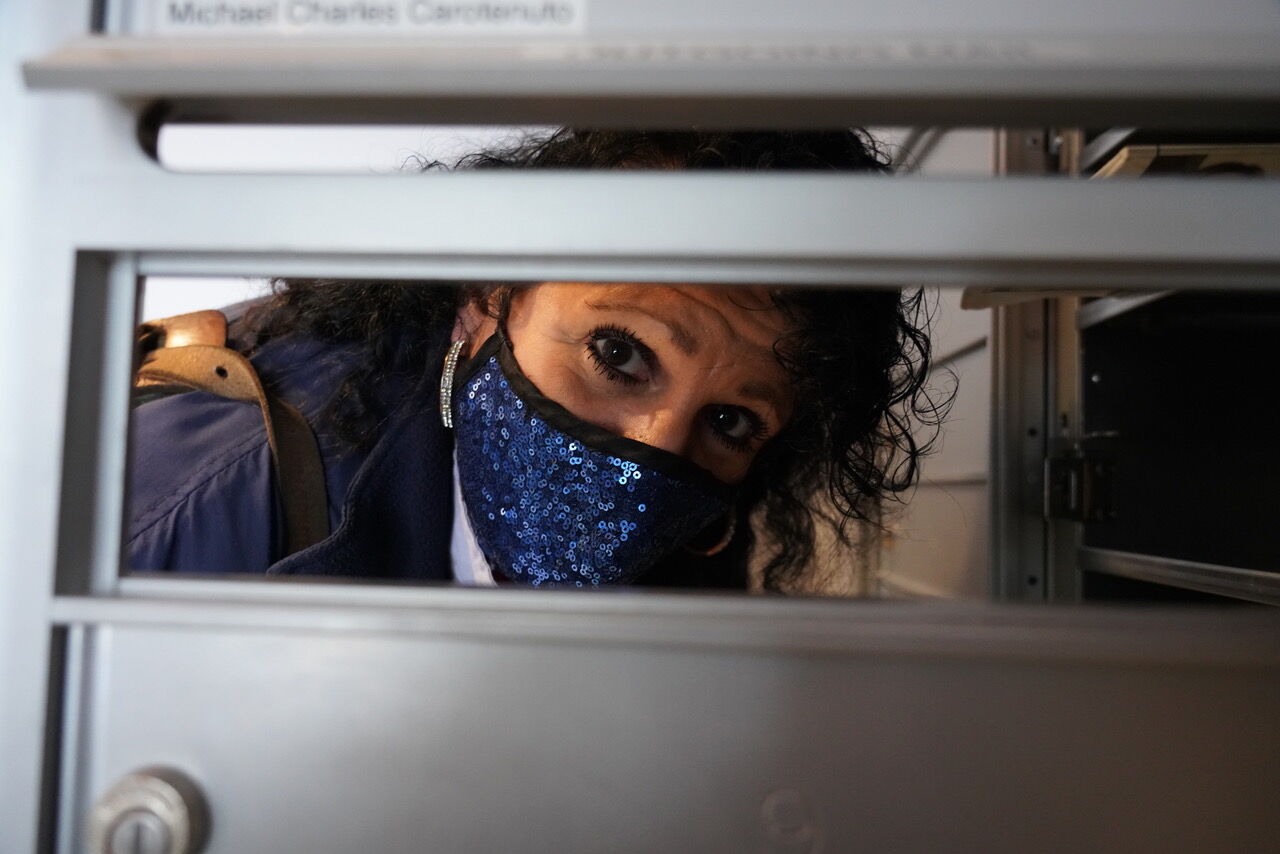 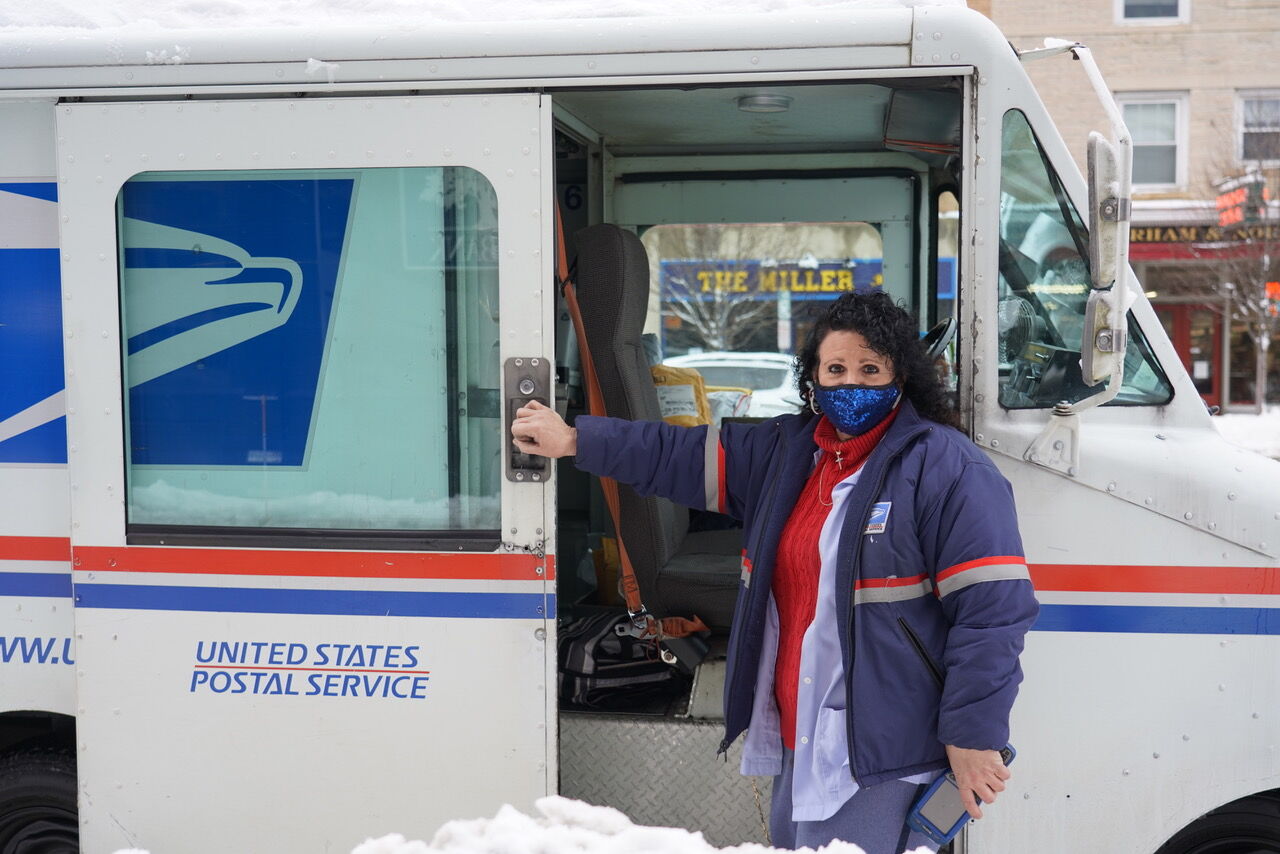 Laurene Stang, a Great Barrington mail carrier, starts each day with a positive attitude. “I tell my daughters this: Any job you do, you can’t be talking to yourself and being miserable,” she says. “You gotta go out happy, every day.”

GREAT BARRINGTON — Her arms outstretched as if to embrace life itself, a can of mace rattling against her canvas mailbag, Laurene Stang provides ample evidence why we should thank a postal worker on this very day, and maybe tomorrow and the next day as well. She sings:

More than the greatest love the world has known,

This is the love I give to you alone …

She’s on Pleasant Street, ensuring that the street lives up to its name. From behind a COVID-19 mask with blue, showgirl sparkles, she’s belting out a selected standard from the Laurene Stang songbook as she barrels through a foot-plus of snow without flinching.

Today is National Thank a Mail Carrier Day. So, to all of you 644,000 postal employees working behind the scenes and out on the streets — thanks!

For 246 years, by an act of Congress, the U.S. Postal Service has been engaged in the daily miracle of uniting these rowdy states of America by means of physical, tangible, actual mail — glad and mad tidings from maternity wards and war zones, retail stores and bill collectors (all for a remarkably reasonable price, if you think about it).

But, its sepia-tinged past can’t serve as a paperweight for the present. You need only to gaze into the back of any one of its bottle-nosed mail trucks to confront an ever-changing world. Namely, for now, floor-to-ceiling Amazon logos smirking at every delivery person as if to inquire, “What’s taking you so long, Cousin?”

The thermometer on Main Street registers 32 degrees. Early morning downtown, a cacophony of reverse-warning alarms sounds against the backdrop of blades scraping asphalt. The community is digging itself out from a February snowstorm. A plow truck on Pleasant Street, its headlights semiblinded with the sleepyheads of uncleared snow, yields to the “singing mail woman” of Great Barrington, 01230: the great Laurene Stang.

Yes, she has a spectacular singing voice and she’s not afraid to use it. If she doesn’t sing, she might succumb.

Don’t you know it’s been a tough year for the mail service: unprecedented volumes of e-commerce orders; infamously late deliveries around Christmas; fallout from a shambled cost-cutting program introduced by the postmaster general; and high coronavirus cases among its understaffed workforce.

Yet, each morning across the nation, the first signs of life typically are the loading dock lights of the local post office. A founding institution endures. The mission continues. Order will be upheld. And Laurene will sing.

Moving forward on River Street, she intones a pitch-perfect verse of “Please Mr. Postman.” She’s a modern-day Marvelette with a mailbag and a limp. (She has three screws in her left ankle and a new knee in her right leg.) Because Laurene does a lot of walking — 6 to 7 miles a day — she also does a lot of thinking.

“I tell my daughters this: Any job you do, you can’t be talking to yourself and being miserable,” Laurene says. “You gotta go out happy, every day. Especially now with COVID. Now we need happy. We need normalcy, some kind of normalcy.”

She and her three screws and new knee cover the downtown. That includes East Street, where the motorists drive like maniacs. Rosseter Street, where a German shepherd once busted through a screen door to attack her and got a mouthful of mailbag. Pine Street, where a kindly woman recently presented her Swedish meatballs. Quarry Street, where a resident keeps her stocked on candy to keep her going. And, of course, Main Street, where the business owners have many song requests.

Did you ever notice that all those storefronts on Main Street have upper floors? Laurene’s ankles and knees have noticed.

She climbs each creaky stairwell to stuff many ancient mailboxes. You would swear a hard-boiled private eye is somewhere up behind one of those narrow, mysterious hallways working on a case involving a missing husband or a stolen heirloom. He keeps a fedora on standby.

“You want some water?” he asks.

“No, thank you, honey,” Laurene says.

But, Louis J. Oggiani’s mail carrier has to keep moving.

And sometimes when Laurene, the singing mail woman from Lawnguyland gets home from a long day, kicks her aching feet up and wonders if she’s about to die, her children make her dinner.

“I love my kids,” she says, tawking the tawk as she walks the walk up another creaky stairwell.

Her voice echoing off the high ceilings, she’s telling the story of how she once caught her son putting a stamp on the upper left-hand corner of an envelope.

“I almost had a heart attack,” she said.

Also by the way, the singing mail woman says she doesn’t need to be thanked, even on National Thank a Mail Carrier Day. She loves her job. She loves watching the kids along her route growing up. She loves being the unofficial wellness checker of downtown Great Barrington’s elderly residents. She loves her fellow employees, all of whom work together and can rely on one another.

She doesn’t need thanks, but she needs a new pair of orthopedic shoes. She’ll take care of that.

Wait — she does have two requests: After a snowstorm, please shovel a path to your mailbox. And to all you motorists, please slow down.

Just one more question for the singing mail woman: If she were on stage of Carnegie Hall, what would she sing?

“ ‘Ave Maria,’ ” she says without hesitation.

She then stuffs a bank statement into a mailbox, one of an estimated 140 billion pieces of mail that will be delivered this year by the USPS.

She’s singing “Ave Maria” as she secures the mailbox flap.

Felix Carroll lives in Housatonic. He can be reached at felixcarroll5@gmail.com.