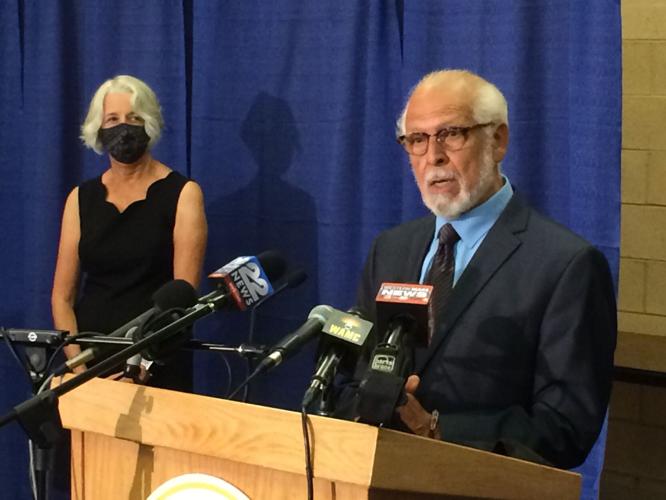 Orlando Isaza, right, and Irene Woods speak at a news conference Wednesday in Springfield. Both are members of the Independent Task Force on the Response to Sexual Abuse within the Diocese of Springfield, which released its final report Wednesday. 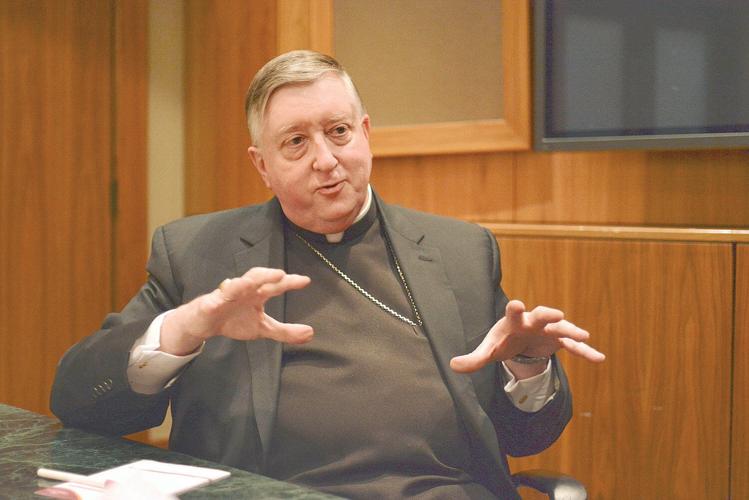 Former Bishop Mitchell T. Rozanski, now the archbishop of St. Louis, created a task force in May 2020 to advise the Springfield Diocese on ways to improve its response to allegations of clergy sexual abuse. The group has submitted its recommendations.

SPRINGFIELD — The Diocese of Springfield is pledging to resolve clergy sexual abuse complaints with greater speed and care, while giving the public more input on its handling of the issue and continuing to restructure its internal Review Board.

A survivor’s quagmire | Two decades after a Cheshire woman reported clergy abuse, she’s back to square one, again. Was her file lost or destroyed?

Those and other changes lie ahead, officials said Wednesday, as the organization that represents Catholics throughout Western Massachusetts works to heal not only the trauma suffered by clergy victims, but its own, at times, flawed practices.

Bishop William D. Byrne said the final report from the independent group, unveiled Wednesday, sets the diocese on a course of “real change.”

“I offer my assurance that this report is just the beginning,” Byrne said at a news conference in downtown Springfield. “We’re talking about a systematic reformation of how we deal with survivors.”

The first step toward that reform, Byrne and others said, will be the creation of an outside group that will advise the diocese on how to implement recommendations in the new 18-page report by the Independent Task Force on the Response to Sexual Abuse within the Diocese of Springfield.

That group worked for 20 months to take stock of how the diocese had been addressing allegations of clergy sexual abuse, including outreach to survivors, their families, priests and the general public.

In “listening sessions” held in 2019, including one Feb. 27 that year at St. Joseph Church in Pittsfield, church leaders heard from survivors that they had been re-traumatized by the diocese after coming forward, the report says.

The 10-member task force, initially led by retired Judge Daniel A. Ford, of Pittsfield, was empaneled to show the diocese a path forward. Byrne vowed that a new spirit of openness will follow.

“This wasn’t directed by me,” he said of the task force’s findings. “It was intended to be independent. No organization should police itself. We really see this as a new day in the work of transparency.”

Irene Woods, co-chair of the task force, said the document gives the diocese a “road map” to improve on how it deals with survivors of clergy abuse. Beyond that, the new outside advisory committee, whose members will be recommended by the task force, will monitor how well the diocese implements reforms, “accomplishing what has not been in place in the past.”

“There is a great deal of work ahead,” Woods said Wednesday.

Her co-chair in the task force’s final months, Orlando Isaza, said the group took guidance from the retired judge who examined, and upheld, allegations against former Bishop Christopher J. Weldon and from the three district attorneys who cover the state’s four western counties.

Isaza, a social worker and community activist, said the report by Judge Peter A. Velis into the Weldon allegations, released just as its members continued their work in 2020, inspired the task force to call for a restructuring of the diocese’s internal Review Board.

Standing at a podium in the church’s Bishop Marshall Center, Isaza listed the many people who were consulted over the past 20 months, including 492 people who responded to a survey, as well as many of the diocese’s priests. The report comes with 500 pages of supporting documents, among them results of surveys and focus groups.

“They want the diocese to create safe environments for all,” Isaza said of those who shared their views.

• “Acknowledging the trauma of sexual abuse on members of the community and ensuring the allocation of resources needed to promote healing of survivors and the faith community.”

On that, the diocese will produce a “strong statement,” which Byrne said is being shaped. The church will produce an annual report on the activities of its Office of Safe Environment and Victim Assistance, led by Jeffrey Trant, and determine how to fund that work more fully. 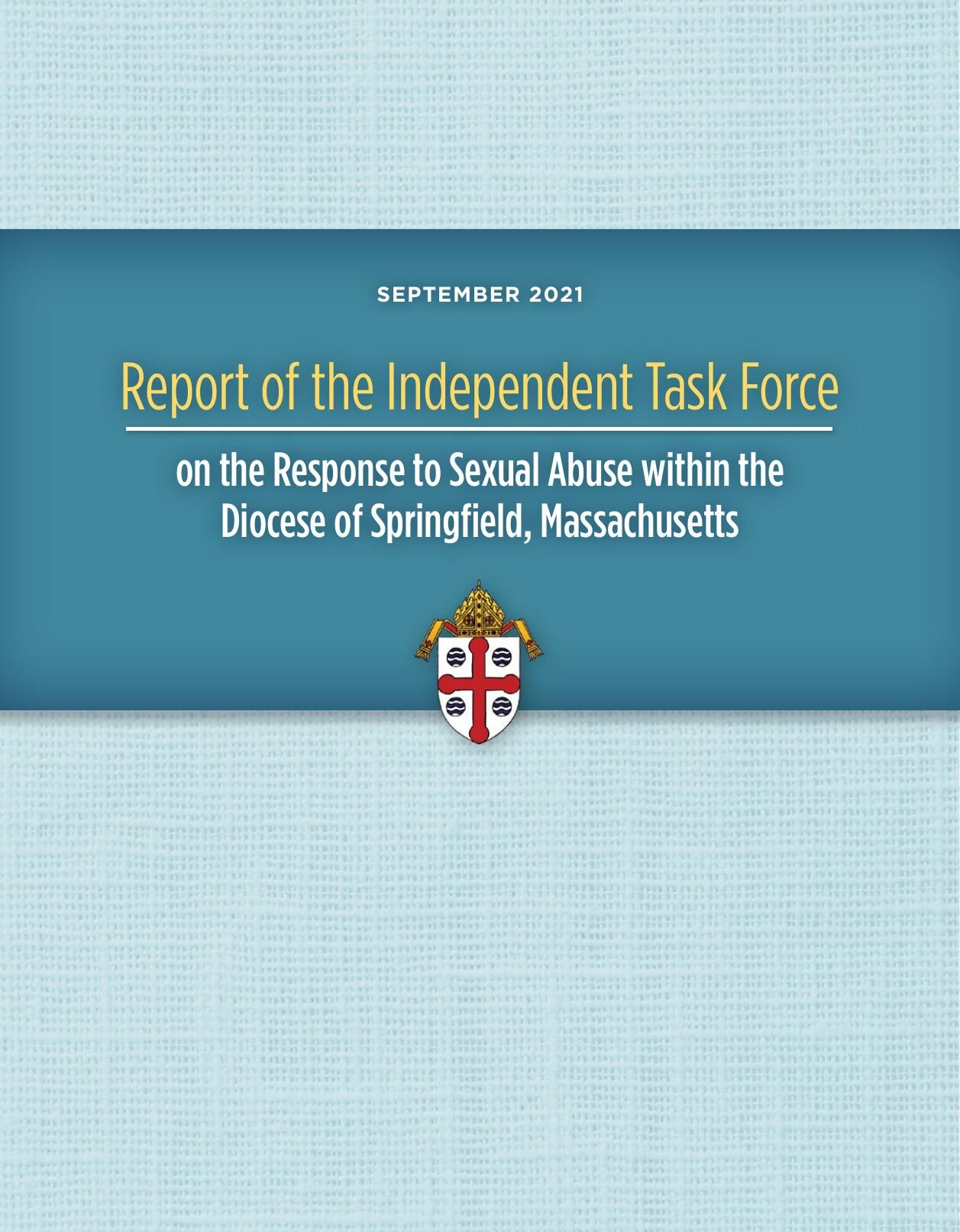 • “Ensuring a transparent system of protocols and procedures that guarantee respect and due process for all involved.”

The lead party on that goal will be the new advisory committee.

Working with the Office of Safe Environment, this group will continue to review policies “to keep current with the best trauma-informed and trauma-responsive practice.” In addition, if the diocese determines that an allegation of abuse is not credible, it will develop a means to restore “the reputation for anyone in ministry for whom, after a thoughtful and comprehensive investigation by civil authorities and assessment by the Review Board, allegations of sexual abuse have been found not to be credible.”

• “Ensuring that the local church leadership is held responsible and accountable for failing to protect children and other vulnerable persons.”

That includes continuing to affirm the memoranda of understanding between the church and local district attorneys that emphasize criminal prosecution, where possible.

• “Holding those who have been credibly accused of sexual abuse responsible and accountable.”

As part of that, the diocese will update its Code of Conduct for all and will “hold anyone in ministry who fails to report past or present allegations of sexual abuse accountable.”

Meantime, the Review Board regularly will monitor “anyone who is credibly accused of sexual abuse.”

• “Establishing programs designed to prevent sexual abuse of anyone in the faith community.”

Among steps called for: making it mandatory for clergy, staff and volunteers to complete a safety training program.

Woods, the task force co-chair, said in a statement that she is hopeful that change can be forged.

“Bishop Byrne’s enthusiastic acceptance of the plan gives us confidence that our efforts including the voices of survivors, the clergy and the broader Catholic community will be heeded,” she said.

It was just a month after announcing the existence of the task force, in May 2020, that former Bishop Mitchell T. Rozanski acknowledged that the diocese had mishandled a complaint of sexual assault and violence lodged by a former altar boy against Weldon.

“I am uniquely aware that despite past efforts, our diocese has not always provided a meaningful nor pastoral response to victims of abuse,” Rozanski said in a statement last year, several months before leaving to become archbishop of St. Louis.

“We owe all who we have failed to protect in the past a meaningful and transparent response to their important voice,” Rozanski said. “We want to provide them with continuing support and healing while ensuring there is full accountability for any abuse.”

Ford, the former Pittsfield judge, stepped away from the task force in early June. Ford said he left because of a perceived conflict of interest because of his work with the law firm Egan Flanagan & Cohen, which represents the diocese.

In a rare move, the Supreme Judicial Court is inviting debate over questions arising from a lawsuit against the Roman Catholic Diocese of Springfield.

A review board run by the Diocese of Springfield has upheld a new allegation of sexual abuse by a Catholic priest who served parishioners of a Pittsfield church in the mid-1980s.