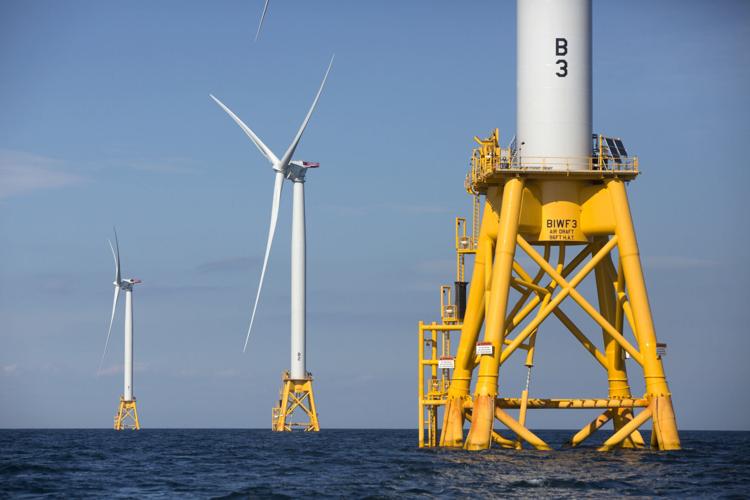 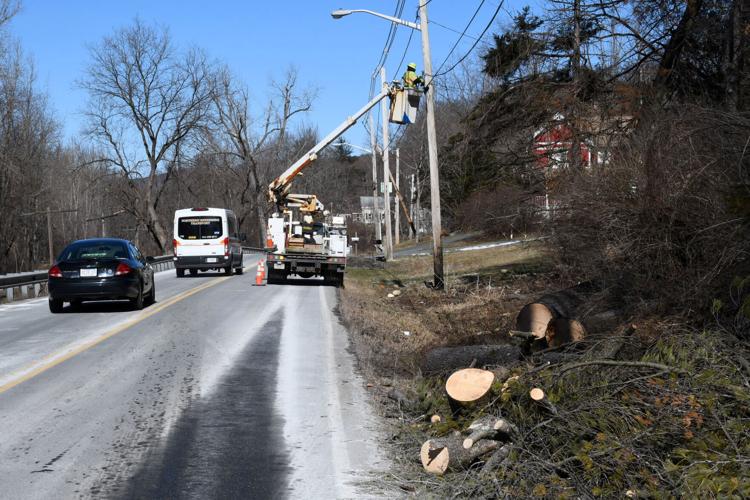 A utility truck works on lines on North Hoosac Road in Williamstown after high winds damaged lines in March. The state Legislature is working on an omnibus energy and climate bill that might include work to improve the electricity grid.

There is a good chance Gov. Charlie Baker will be poring over an omnibus energy and climate bill a year from now —with lawmakers, advocates and industry representatives waiting eagerly for the signing ceremony.

State lawmakers hope to shape an omnibus energy and climate bill this session. It's likely to focus on:

Wide-ranging energy and climate policy has been on the table and among the Legislature's priorities as each of the last at least three sessions have wound down (though last session's climate bill didn't become law until it was re-enacted early in the current session).

The parallel track of implementing the most recent law and working on the next one became apparent months ago as advocates pushed Beacon Hill to act with an urgency that at least keeps pace with the changing climate and pitched broad legislation (H 3288/S 2136) that would require utilities to provide 100 percent clean electricity by 2035, new buildings to be built without fossil fuel heating, and that all new cars sold after 2035 be electric vehicles.

Though that legislation has not yet had a hearing before the Joint Committee on Telecommunications, Utilities and Energy, the slate of bills that attracted testimony during the handful of hearings the committee held before the Legislature's August recess provide some clues about the issues the panel is thinking about and what could ultimately end up in an end-of-session omnibus bill.

Here are four areas that are likely to get some attention from the committee before the session wraps up in about a year:

Authorizing the state to go out to bid for a greater amount of offshore wind power generation has been a mainstay of recent energy laws and the Legislature will have to keep upping the administration's authorization if Massachusetts is going to hit the gigawatt-a-year pace that the Baker administration says will be necessary in the 2030s.

The 2016 climate and energy law authorized 1,600 megawatts of offshore wind and lawmakers authorized another 1,600 MW in their 2018 energy law. That cumulative 3,200 MW authorization is expected to be used up once the state's utilities select the third project, following Vineyard Wind I and Mayflower Wind, to enter into a contract with later this year.

The most recent climate law requires that the executive branch direct Massachusetts utilities to buy an additional 2,400 MW of offshore wind power once the initial 3,200 MW has been secured. But supporters of offshore wind, like Sen. Marc Pacheco, have been beating the drum that the state needs to keep authorizing more.

"It is very important to continue to send the market signal to the offshore wind industry internationally that we're not over when we're doing these three tranches, because their planning is long-term planning as to how we're going to move forward here," Pacheco told the TUE Committee during a hearing last month.

Pacheco promoted his bill (S 2229) which, among many other things, would direct the executive branch to require utilities to conduct additional offshore wind solicitations and procurements "if it finds it is necessary to meet the statewide greenhouse gas emissions limits" and would require that at least 10,600 MW (or 10.6 GW) be procured by 2035.

Pacheco also urged the committee to keep the issue of offshore wind energy transmission in mind, particularly as the state's third offshore wind contract gets closer to being signed.

"It's crucial right now to be talking about transmission now that we will have three companies that are in that could actually sit down together with the administration and the Legislature and start to talk about transmission, and how that transmission could work so much better if we establish a grid on the ocean floor," he said.

The Baker administration, which also appears to have an appetite for more offshore wind power, is expected to renew its push this session for the ability to secure the power through a joint contract with neighboring states.

"Ideally, we will be looking at all of this in a regional context in the future, but I think we have the opportunity to work on that this session as conversations continue with neighboring states about reforming the regional markets and ensuring that we can work together as a region to build out the transmission and interconnection we need to support clean generation throughout the region," Energy and Environmental Affairs Secretary Kathleen Theoharides said in February when Baker sent the climate bill back with amendments. "So we absolutely need additional authorization to procure clean power regionally and that will be a focus for us this session."

As the state increases intermittent renewable energy generation through offshore wind and solar, advocates say it will become even more important that Massachusetts have large-scale energy storage options that can charge up when there is excess and low-cost generation and be deployed into the grid during high-cost peak times.

"Harnessing the power of large-scale energy storage to maximize the value of renewable generation, and to avoid over-reliance on dirty fossil fuel fired generating units to preserve reliability and balance variable renewable generation, is the next bold step Massachusetts should take to ensure that our future electric grid would in fact be clean, reliable and equitable for all Massachusetts residents," FirstLight Power CEO Alicia Barton, the former head of the Massachusetts Clean Energy Center, told the TUE Committee on July 23.

Barton, whose company's portfolio includes energy storage, detailed for the committee two similar bills (S 2155/H 3314) that would create a procurement program for large-scale energy storage service similar to the processes the state and utilities have used to procure offshore wind and hydroelectric generation. She said the bills would "require the state's investor-owned utilities to contract for service from large-scale storage resources" and coordinate the dispatch of the storage assets with the wind and hydro generators.

With the deployment of energy storage technology in tandem with clean energy generation, the offshore wind industry along the Massachusetts coast has the potential to be a more significant sector than "anybody ever imagined or appreciated," Gov. Charlie Baker has said.

While Massachusetts is busy trying to procure more renewable energy resources, a complementary effort is afoot to make sure the region's electric grid is ready to accommodate it. Part of that effort includes proceedings that the Department of Public Utilities has undertaken to study ways to improve how utilities plan ahead for expanding and upgrading the distributed energy resource integration process.

Another part of it, the Coalition for Community Solar Access's northeast regional director Kaitlin Kelly O'Neill said, should be a bill (H 3313) that seeks to allow utilities to analyze the upgrades and costs required to connect a new distributed clean energy resource to the grid before the interconnection application has been submitted. Currently, the process requires the utilities to wait for the application to begin the planning work, she said.

Massachusetts has been part of a multi-state effort to reform the regional energy system. Last year, Baker and other New England governors issued a formal call for changes to the regional electricity market, the transmission planning process and the governance of the New England power system operator.

"This process is incompatible with the continued expedient deployment of clean energy resources in the state, and it will not support the continued growth of renewables that the commonwealth must continue to build and operate in the coming years," Kelly O'Neill told the TUE Committee on July 28. She added, "Improving the process by which clean, distributed energy resources are interconnected to the electric grid is the foundation to expanding our access to renewable energy, decarbonizing our economy, and reaching 50 percent reductions in statewide emissions by 2030 and net-zero by 2050."

Massachusetts has been part of a multi-state effort to reform the regional energy system. Last year, Baker and other New England governors issued a formal call for changes to the regional electricity market, the transmission planning process and the governance of the New England power system operator. The governors said the regional grid has to evolve if the states are to meet their greenhouse gas emissions targets.

Over the next three decades, the New England power system is expected to accommodate much greater levels of clean energy resources than it currently does, which has the potential to change the way energy flows across the grid. Today, power typically flows one way from the generator to the customer but the rise of distributed energy generation like solar and wind could change that.

"The power system as we currently know it is certain to undergo substantial change in the future," Kate Bailey of the New Hampshire Public Utilities Commission said in February.

Zero-emission vehicles are a major part of the Baker administration's strategy to meet the state's greenhouse gas emissions reduction goals, but getting enough of them on the road is going to require work around cost competitiveness, battery life and access to charging infrastructure.

Hitting the target of a 45 percent reduction from 1990 levels by 2030 will "require that about 1 million of the 5.5 million [passenger vehicles] projected to be registered in the Commonwealth in 2030 be" zero-emission vehicles, the administration said in its 2050 decarbonization plan, which also calls for a requirement that all new cars and passenger trucks sold in Massachusetts be zero-emission vehicles starting in 2035.

Various organizations testified before the TUE Committee late last month on bills that would hasten the adoption of electric vehicles by requiring all public motor vehicle fleets and motor vehicle fleets serving a public purpose (including school buses) to be made up of electric vehicles by 2035 (H 3255/S 2139), ordering the MBTA to purchase or lease only zero-emission buses starting in 2030 and to operate exclusively zero-emission passenger buses by the end of 2040 (S 2130), and to require utilities to propose a rate "designed to reflect the cost of providing electricity to a consumer charging an electric vehicle at an electric vehicle charging station at different times of the day" (H 3347/S 2151).

"We need transportation solutions that both reduce greenhouse gas emissions and improve air pollution hotspots, which will not only improve quality of life but also save lives," Staci Rubin, vice president of environmental justice at the Conservation Law Foundation, told the committee. "To do this, we must take at least five actions. One, set fleet targets. Two, set deadlines to convert our public transit vehicles to electric vehicles. Three, improve our utility rate structures to support electric vehicles. Four, identify funding to spur transportation electrification, and five, set air pollution reduction targets."

Rubin said it is essential that Massachusetts set deadlines for a transition to electric vehicles and pointed out that the climate law Gov. Baker signed earlier this year "notably excluded specific targets to transition from fossil fuel to zero-emission vehicles."

Sen. Michael Barrett, who co-chairs the TUE Committee with Rep. Jeff Roy, said the climate law requires that the executive branch set an overall emission reduction target and a sublimit for the transportation sector for 2025 by July 1, 2022 — one month before the current legislative session will wind down its formal business. That means a transportation sublimit could be in place when the Legislature is hammering out the final details of its next major climate and energy bill.

"So there's a timing issue that we want to be thoughtful about," Barrett said.