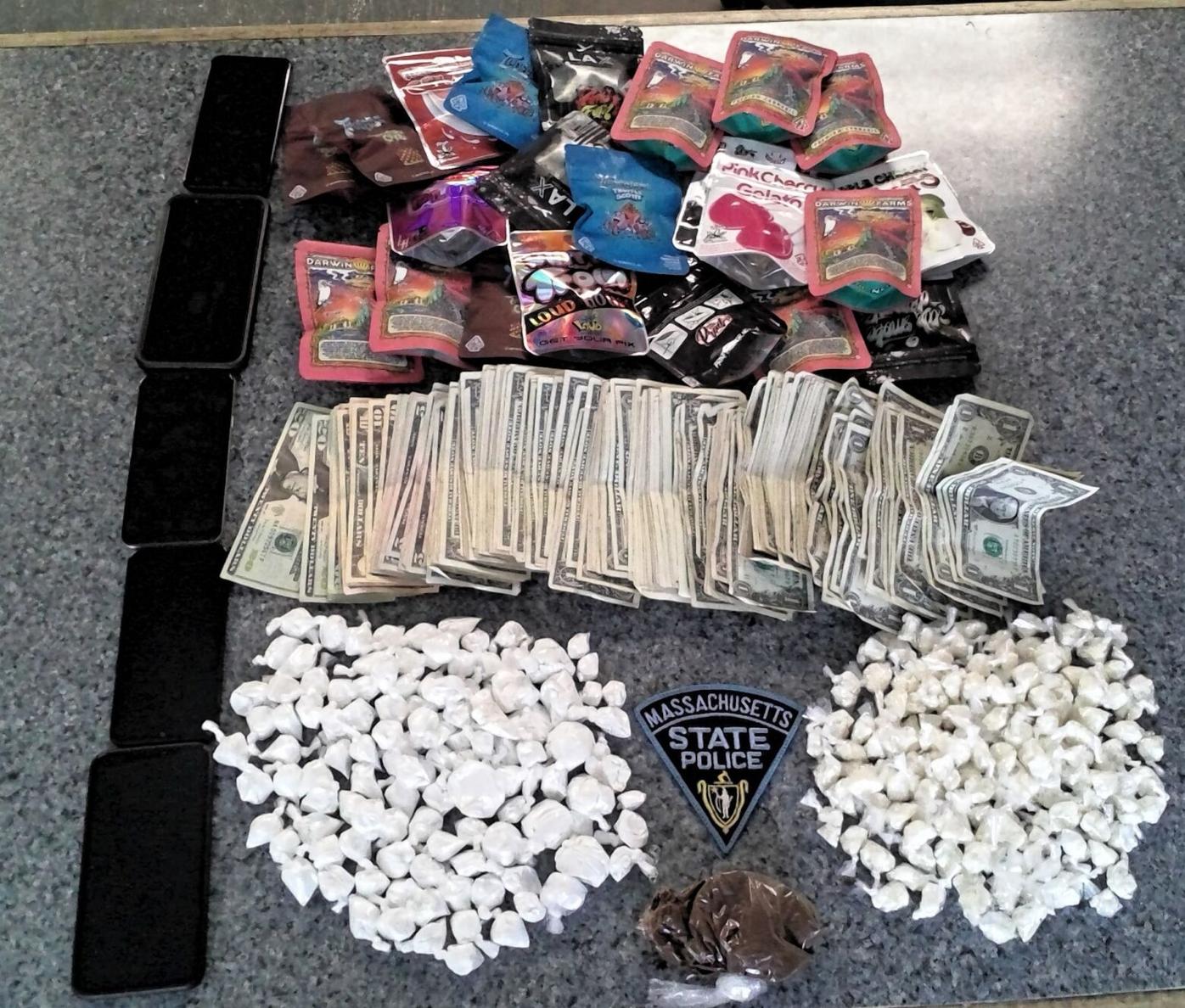 COCAINE INSIDE TINTED WINDOWS: A little after 9 a.m. Thursday, a trooper in Brockton stopped a car with “excessive window tint.” Inside, he found Lue Andrade, a 25-year-old Bridgewater man who the MSP says had a quantity of marijuana over the legal limit in Massachusetts. The car was searched after being towed to a state police barracks. Troopers say they found plastic bags with what they contend is powder cocaine weighing 393 grams. The search also found bags of what is believed to be crack cocaine weighing 292 grams. 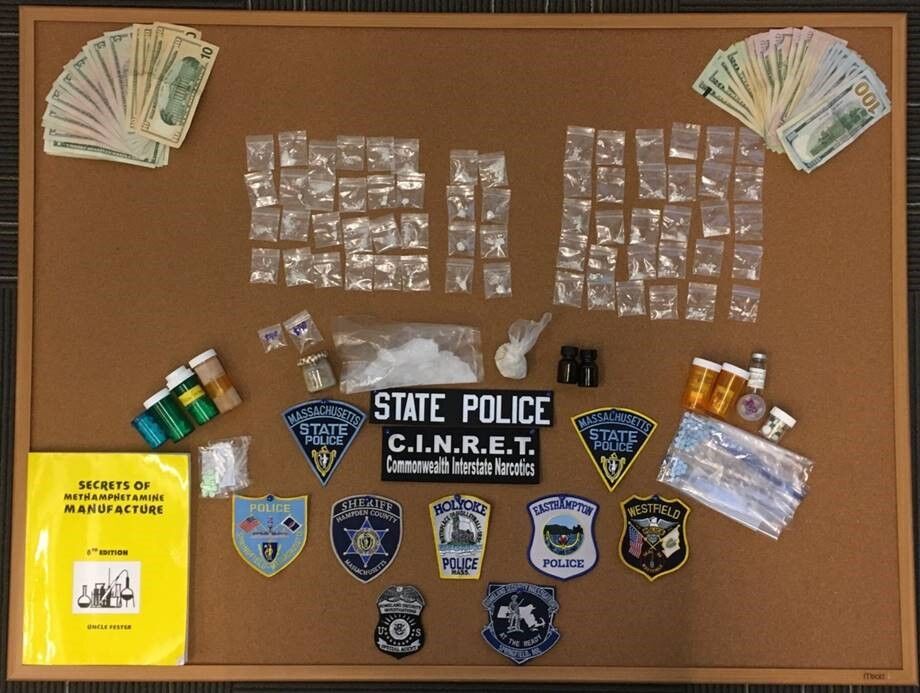 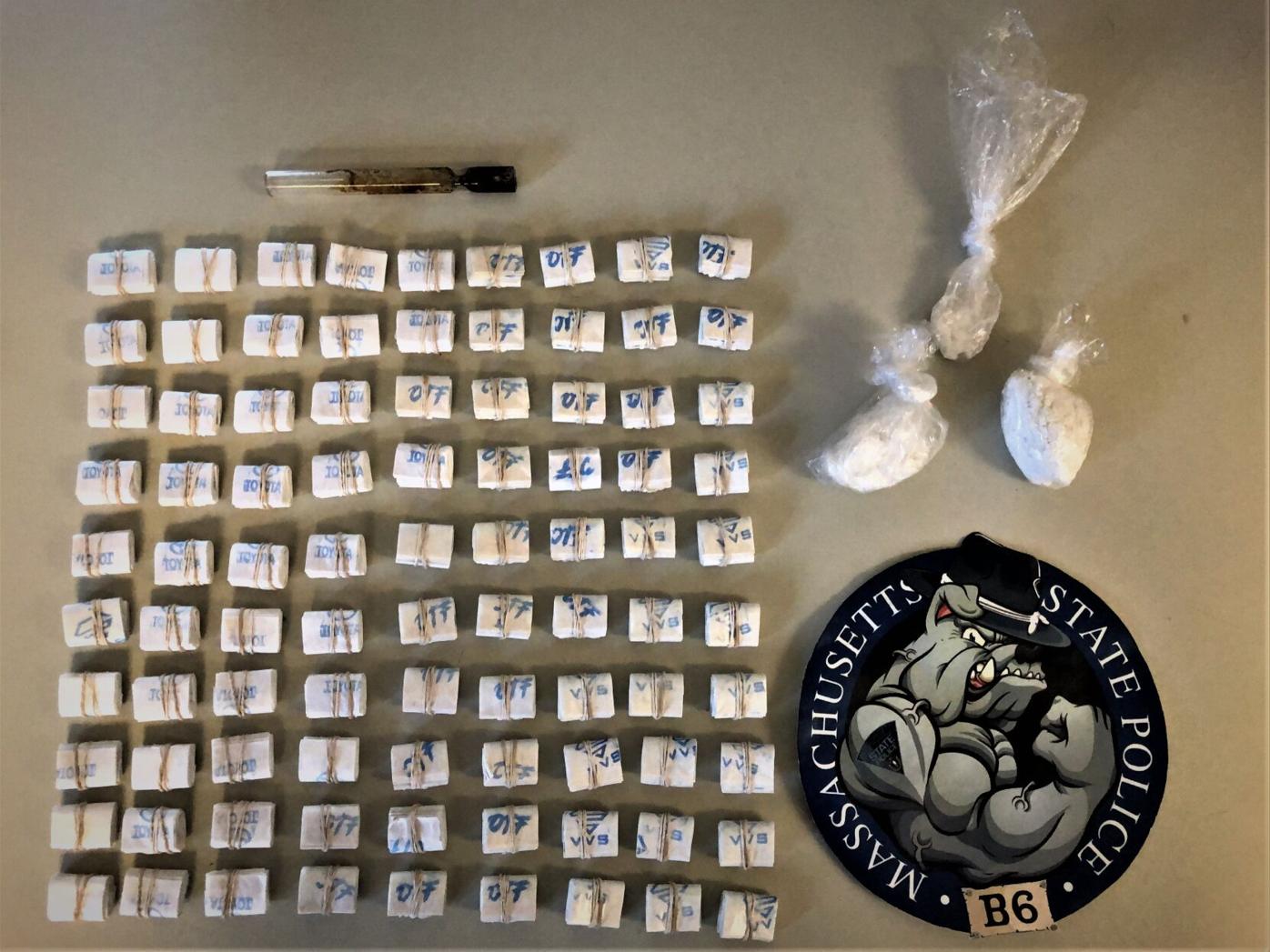 HEROIN & CRACK IN NORTHAMPTON: On Tuesday, a state trooper monitoring traffic on I-91 stopped a car with an unreadable license plate. The trooper found that the driver's license had been suspended. A search found a pipe associated with use of narcotics, according to the MSP. Harry Sanborn, a 46-year-old Vermont man, was arrested on an array of drug charges. A search of his car found about 900 wax packets, with each containing a small amount of what police said they believe is heroin with a combined weight of 18 grams. The bag also contained three baggies of a substance suspected to be crack cocaine weighing 47 grams. 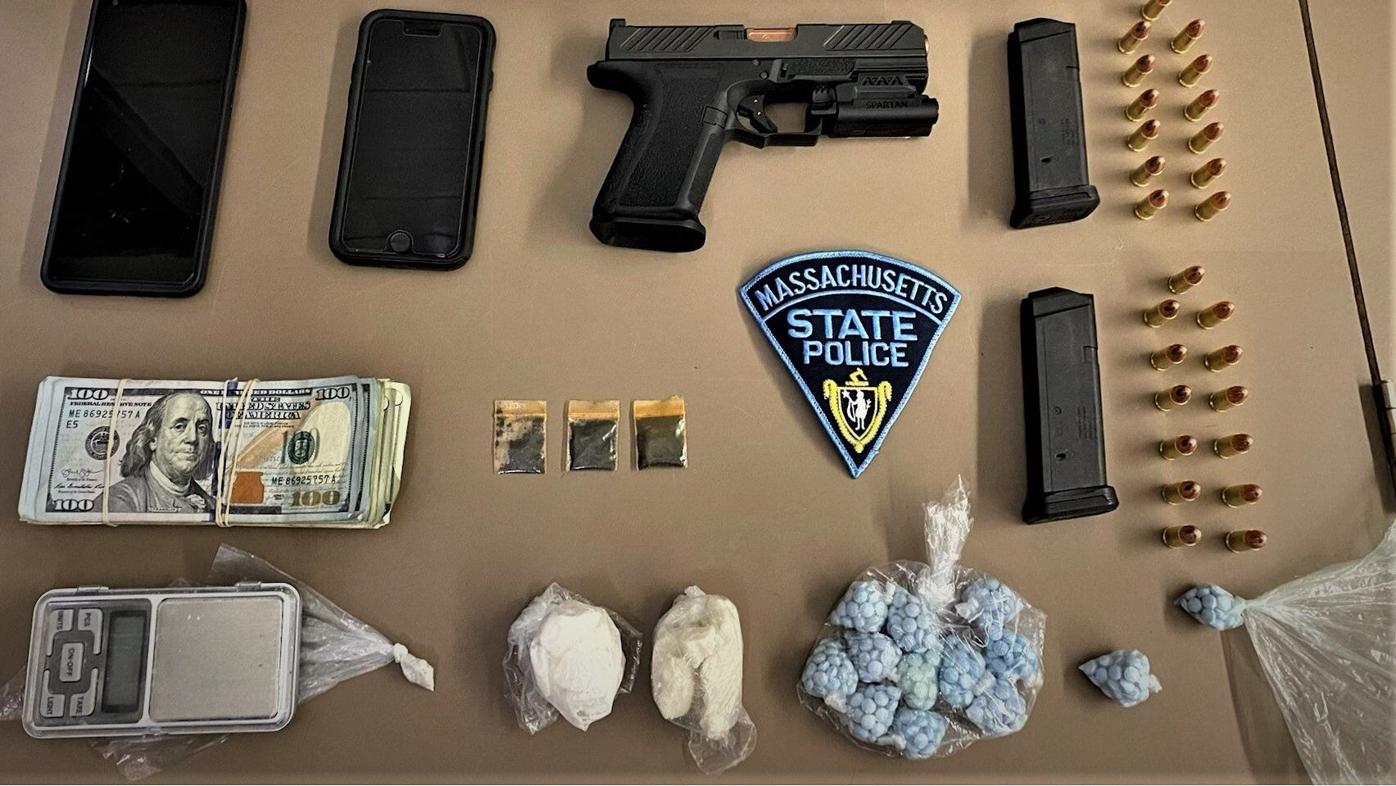 GUNS, DRUGS & MONEY: Just before 7 p.m. Monday, a trooper on patrol in Springfield saw a car run a red light. Neither the driver, Christopher Reyes, nor his passenger, Raven Sullivan, had a license, the MSP said. Police said they noticed a large amount of cash in Reyes' pocket. During a search of the car, police found a 9mm pistol loaded with 13 rounds of ammunition under the driver’s seat. Troopers found other 9mm ammunition, bags containing more than 50 grams of a substance suspected to be crack cocaine and bags containing approximately 500 pills suspected to be oxycodone. Also found: several bags of a substance suspected to be PCP, and a large amount of cash. 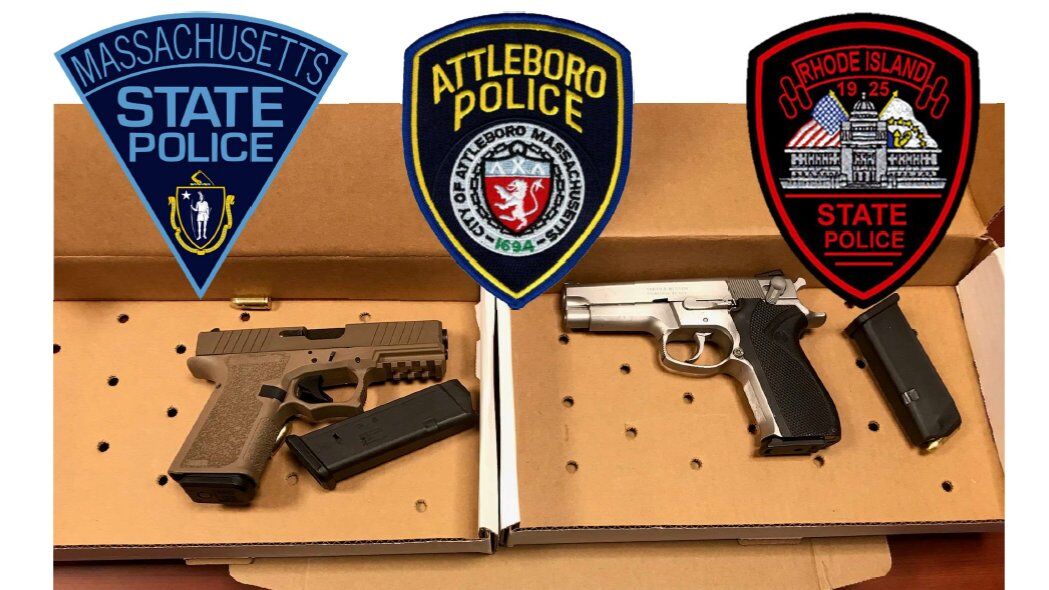 THE 'GHOST GUN' SUSPECT: A Rhode Island man who fired multiple shots at a man in Attleboro Feb. 18 was arrested Tuesday morning following a joint investigation by Massachusetts State Police and Rhode Island State Police, local police, and members of the United States Marshals Service. The suspected shooter, 19-year-old Mark S. Socia, was found to be staying in an apartment in Central Falls, R.I., where he was arrested, as police say, "without incident." In a search of the apartment, police say they found multiple rounds of ammunition and three firearms: a Smith & Wesson 9mm pistol with an obliterated serial number, a Smith & Wesson .38 Special revolver; and a polymer "ghost gun." That weapon was made of parts purchased online and later assembled. 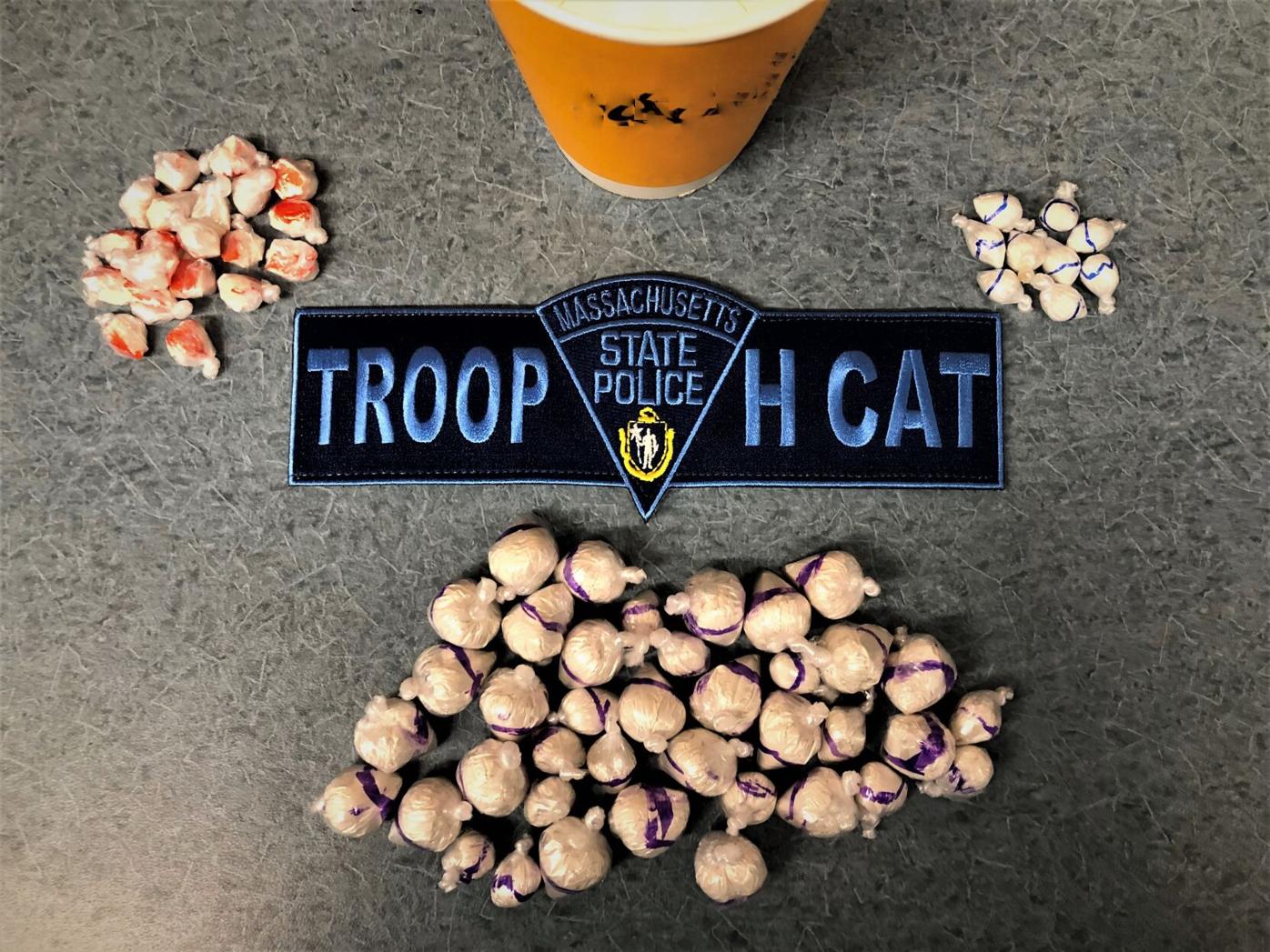 COCAINE IN A CUP: At about 11:30 a.m. last Monday, a trooper on patrol on I-93 south in Boston stopped a car with a headlight out, even though it was daytime. The trooper found that the driver, 28-year-old Vladimir Soto-Perez, did not have a license. In a search, the trooper says he found a fast-food cup containing what police believe are baggies of heroin and cocaine. In all, 69 baggies were found. Police say the seizure involved 84 grams of heroin, 12 grams of crack cocaine and 6 grams of powder cocaine. The cup is part of the haul depicted in this photograph.

HALF-KILO OF HEROIN: On Tuesday, a bust targeted four suspects in Hampden County believed to be involved with a large-scale heroin distribution effort across western Massachusetts. Both the Pittsfield Police Department's Drug Unit and the Berkshire County Sheriff’s Department assisted, along with the Berkshire County Drug Task Force. The probe was run by what’s known as the “west unit” of the Massachusetts State Police Commonwealth Interstate Narcotics Reduction and Enforcement Team, or CINRET. In addition to making four arrests, investigators seized a half-kilo of heroin, a firearm, and a large quantity of currency. Those arrested: Enrique Alicea, 29; Joshua Vaquez, 29; Jose Alicea, 69; Todd Cruzado, 33. 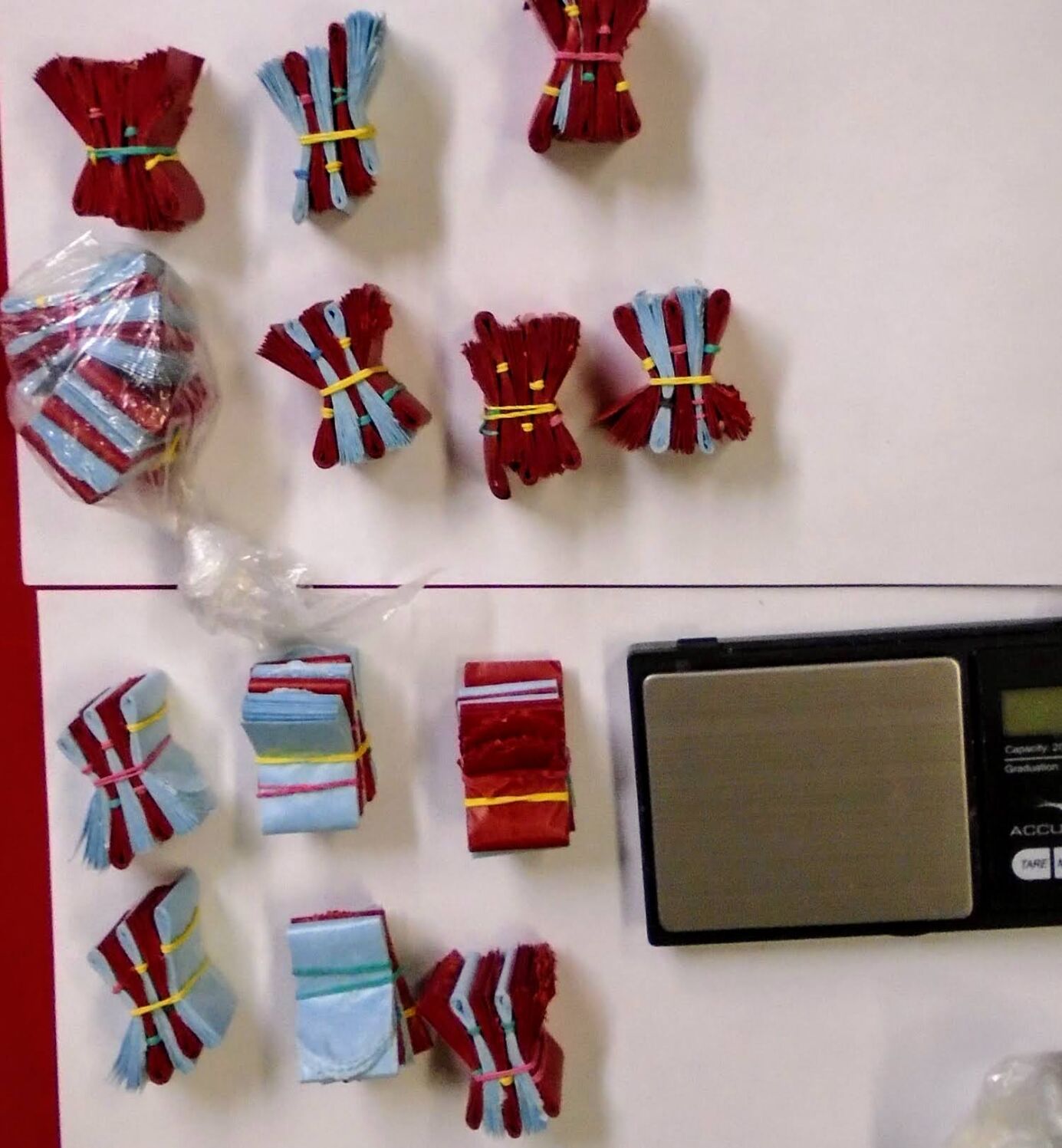 Pittsfield police say two officers seized 700 bags with a white powder believed to be heroin, and 56 grams of cocaine, from a shoplifting suspect Saturday.

PITTSFIELD — This past week, police nailed suspected drug dealers across the state, including a bust Saturday in Pittsfield. That’s a serious business that includes preparing for court appearances and successful prosecutions.

Drug arrests also give police agencies a chance to show off their artistic sides, as officers or troopers create a subgenre of crime photos: those depicting a drug bust’s haul.

A 2019 story on the website Topic argued that these kinds of images, historically, have served as a propaganda tool in the war on drugs. The author, Andy Wright, noted the "apparent relish and artistic flair" with which the confiscated materials are arranged.

"Confiscated cash is meticulously fanned, drug baggies stacked in neat pyramids, guns propped on their butts, pointing to the sky — arrangements that, if they featured any other kind of object, might look at home in a store window," he wrote. "This genre of photography has achieved a sort of iconic status, served up by national and local media on a regular basis as evidence of law enforcement’s victories in the drug war, as well as a titillating snapshot of illicit deeds."

Here, below, are examples of the drugs, weapons and cash that were styled, photographed and released by the Massachusetts State Police and the Pittsfield Police Department in just the past week.

COCAINE INSIDE TINTED WINDOWS: A little after 9 a.m. Thursday, a trooper in Brockton stopped a car with “excessive window tint.” Inside, he fo…

Steps commonly taken to produce the most dramatic landscape of seized items appear to be this: Arrange the drugs. Fan, stack or spread the bills. Group by color. Stand bullets up on end. Include relevant evidence (like the how-to manual on methamphetamine production seized in one arrest).

And position departmental badges, emblems or other police swag, most often in the foreground. Neatness counts, judging from these little tableaus.

Finally, here's a look at a drug haul reported Saturday by Pittsfield police.

The department says two officers, Ryan Conklin and Christopher Coffey, chased a shoplifting suspect from the Cumberland Farms on First Street. The officers say they saw the suspect jettison a bag he was carrying. Inside, police say, they found 700 bags with a white powder believed to be heroin, along with 56 grams of both powdered and crack cocaine.

The man is being held and faces arraignment Monday in Central Berkshire District Court.