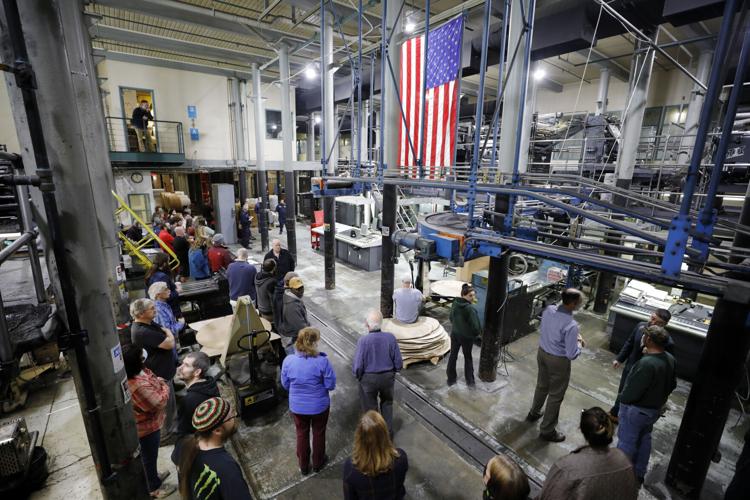 Publisher Fredric Rutberg addresses employees from the balcony of the The Berkshire Eagle’s newly installed printing press earlier in November. The Eagle’s new printing press, known as “the Magnum” — a Goss Community SSC Magnum, to be precise — is now in full operation, following an installation this fall that Rutberg described as akin to “a complicated military maneuver.” 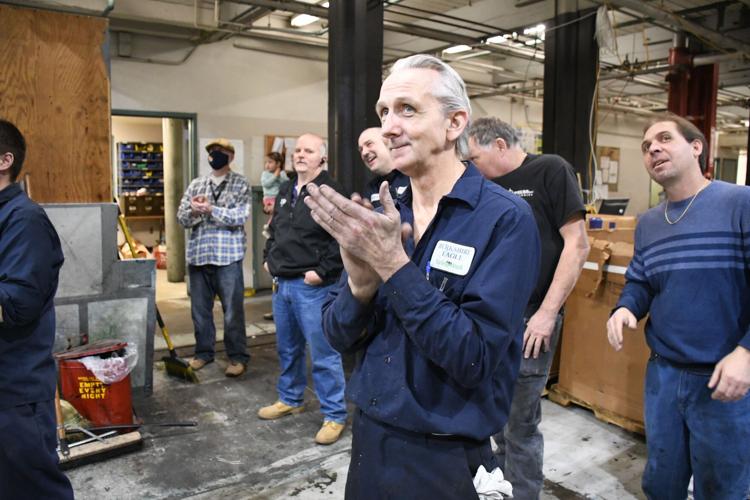 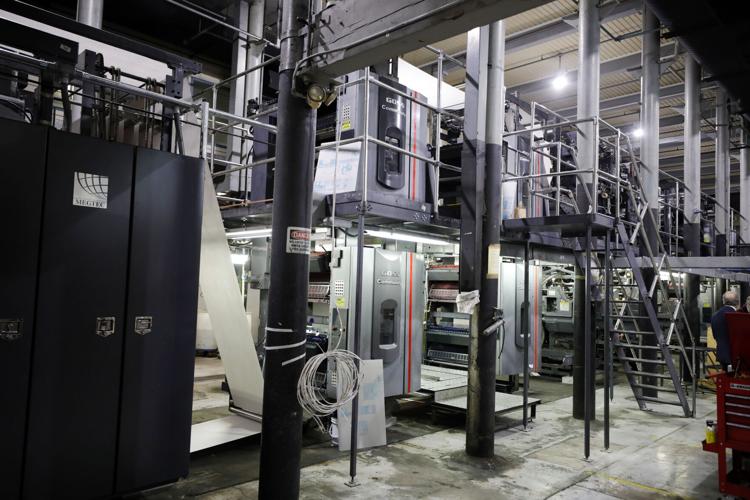 The installation of The Berkshire Eagle’s Goss Magnum printing press is complete.

Publisher Fredric Rutberg addresses employees from the balcony of the The Berkshire Eagle’s newly installed printing press earlier in November. The Eagle’s new printing press, known as “the Magnum” — a Goss Community SSC Magnum, to be precise — is now in full operation, following an installation this fall that Rutberg described as akin to “a complicated military maneuver.”

The installation of The Berkshire Eagle’s Goss Magnum printing press is complete.

PITTSFIELD — The Berkshire Eagle’s commitment to a future in print journalism has been secured with bolts to the concrete floor here at the publication’s headquarters on South Church Street.

It is 110-feet long, two stories tall and its control panels already are smudged in cyan, magenta, yellow and black from eager, deadline-fixed fingers. And, in the words of The Eagle’s Publisher and President Fredric D. Rutberg, “It’s beautiful.”

“We said last year that being digital was our overarching goal in the company, but we tried to also make it clear that that’s not at the cost of our print readers and print advertisers,” said Rutberg. “We’re committed to print. This shows it.”

The Eagle’s new printing press, known as “the Magnum” — a Goss Community SSC Magnum, to be precise — is now in full operation, following an installation this fall that Rutberg described as akin to “a complicated military maneuver.”

“We started up on pretty much the default settings, and everything already looks 10 times better than our old press from the get-go,” said Bruce Meiswinkel, the production manager for New England Newspapers. “So it’s only going to get better from here.”

Full-throttled, the Magnum can print at a speed of 30,000 newspapers an hour, more than twice as fast as its predecessor was printing in its last, arthritic days.

And it’s much quieter than its predecessor. Less thwop-thwop. More chick-chick.

With all systems go, all of the publications printed here — and it’s not just The Eagle — have a higher-quality look. The printer itself requires far less day-to-day, minute-to-minute tinkering compared to the printer it replaced, and it significantly reduces the amount of newsprint waste.

“It’s just much more faithful to the images we’re making,” said The Eagle’s veteran, award-winning photographer Ben Garver. “And so, the photos in print look like the photos we have on the screen. Even when we’re photographing in lighting conditions like in a dark bar, with incandescent lights and warm and glowing colors, it all just comes out faithfully.”

The Magnum was purchased used from a Washington State-based broker, ImPRESSions Worldwide, known as IW. As part of the purchase agreement, IW transported the printer some 1,300-plus miles to Pittsfield from its home in Duluth, Minn., where it had been used by a newspaper.

“We actually, originally, weren’t even looking for a press,” said Meiswinkel. “We were out looking for roll stands.” (Roll stands hold those huge, 24-inch-wide newspaper rolls — 38,000 feet of paper per roll — and feed it into the printing press.)

“But then,” said Meiswinkel, “we kind of stumbled across this press, and it was a good deal because of the timing of it. A couple years ago, it probably would cost two to three times more than what we paid for this. So, it was, for us, a too-good-to-pass-up deal.”

The Magnum arrived on seven flatbed trailers. A crew from IW not only assisted The Eagle’s press crew with the installation, but also trained The Eagle crew.

“It was a real exercise in teamwork,” said Rutberg, “and everything was finished ahead of schedule.”

IW had estimated it would take 12 to 15 weeks to get the new press up and running. Instead, it took about nine weeks, said Meiswinkel. The installation crew, he said, worked seven days a week.

“We were giving them sometimes six to eight people a day so that we could really bust it out,” he said. “We got the old press out in five days, which they said was a record and it was unheard of — that they’d never done anything like that before. As the trucks would come in with the new printer, we were ready for them. And, yeah, it’s been a process for sure.”

In the interim, The Eagle and other publications printed by New England Newspapers were printed on a second, smaller press.

The old Goss Urbanite press — which printed more than 17 billion pages or 6 million miles of paper over a span of nearly 32 years — printed its last newspaper on the evening of Friday, Sept. 3 (the Saturday, Sept. 4, edition). It had been showing its age. In its last year, at least, the printing quality was often poor.

Following its dismantlement, it was loaded onto flatbed trucks and brought to the Port of Albany, in New York State. As part of the agreement, IW sold it for scrap metal.

The Eagle hosted a celebration of the new printer Friday evening for friends and supporters. The general public will be invited to an open house in January, said Rutberg.

The new press arrives at a time when the printed newspaper industry has been in sharp decline. Between 2005 and 2020, more than one-fourth of the newspapers in the United States died out, said Penelope Muse Abernathy, the author of four reports on the state of local news and a professor at Northwestern University’s Medill School of Journalism. She said the pandemic and current economic uncertainty “have turbo-charged a decline in industry, with dozens of newspapers closing or switching to online-only.”

For New England Newspapers, which has a sizable commercial printing business separate and apart from The Eagle, the purchase makes sense. Like the printer it replaced, the Magnum now prints newspapers and other publications based in Connecticut, New York, New Hampshire and Vermont.

“One of the side benefits of this new press is that it will allow us to bid on some other jobs that we couldn’t bid on previously because this is much more versatile,” said Rutberg. “That potential is not what we based the purchase on, but it may make it economically more attractive to us down the road.”