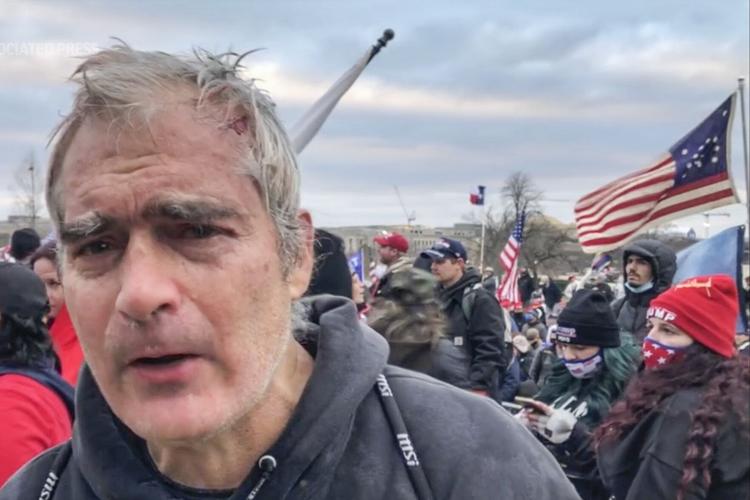 This image from video recorded Jan. 6, 2021, captures Vincent Gillespie on the grounds of the U.S. Capitol in Washington where prosecutors say he was among a rioting mob trying to gain control of the building from the federal government.

The logo for Berkshire Nautilus, shown in stickers on the right, is visible on the sweatshirt allegedly worn by Vincent Gillespie during the Jan. 6 attack on the U.S. Capitol.

On Jan. 6, 2021, prosecutors say, Gillespie engaged in a very different kind of battle, joining rioters as they tried to wrest control of the U.S. Capitol from the federal government in one of the most violent confrontations of the riot.

Gillespie, who investigators say was identified by half a dozen sources from images taken that day, was among a mob trying to force its way through a tunnel at the Lower West Terrace of the Capitol — an assault that almost succeeded by his own description. And he was also wearing a sweatshirt bearing the Berkshire Nautilus logo.

"We were almost overpowering them," Gillespie, blood visible on his scalp from the clash, told an Associated Press journalist at the scene that day. "If you had like another 15, 20 guys behind us pushing I think we could have won it."

The AP video that captured a flushed Gillespie that day milling about outside the Capitol speaking defiantly about his role in the attack — and his lament that more like-minded individuals didn't join the fight — reveal both the depth of resolve of many of the rioters, and the uncertainty others felt about just what they would do once inside the building.

What is clear, federal investigators said, is that Gillespie participated in a violent struggle against law enforcement officials trying to prevent rioters from entering the building as a joint session of Congress was engaged in certifying Electoral College votes.

The Athol resident was spotted outside the Capitol pouring water into his eyes apparently to combat the effects of chemical spray used to try to control the crowd.

Gillespie told the AP at the scene that day that he was among those attempting to storm the building. Gillespie said he and others tried to burst through an opening.

"I was with some other guys. And then we were starting to push against them and they were beating us and putting that pepper spray stuff in your eyes. But there were a bunch of people pushing behind us," Gillespie told the AP.

"What you guys need to know, and no one is going to listen to this, we were very (expletive) close." If more people had been behind him, he said, "then there's that second set of doors we would have just burst through it."

What was apparently less clear to Gillespie that day was what he and the others with him would do if they had been able to take control of the Capitol.

Although he was quick to offer up his name when asked by the AP reporter, Gillespie hesitated before saying where he was from.

"They'll come after me, man," he said, hesitating before adding, "I'm in Massachusetts."

Gillespie ultimately faced seven criminal counts including civil disorder, assaulting officers and disorderly conduct in the Capitol. He has pleaded not guilty.

He's one of more than 775 people arrested in nearly all 50 states and the District of Columbia in connection with the Jan. 6 assault in which the pro-Trump mob sought to stop the certification of Joe Biden's 2020 election victory. Rioters smashed windows, broke through doors and beat and bloodied law enforcement officers who were vastly underprepared for the mob.

Vincent Gillespie is the son of Gregory Gillespie, the artist whose self-portraits, fantasy landscapes and geometric abstractions are included in the collections of the Metropolitan Museum of Art, the Whitney Museum of American Art, the Museum of Fine Arts in Boston and other museums.

His paintings are also at the center of a long-running and so far unsuccessful legal battle waged by Gillespie against his stepmother and her lawyers in an effort to contest control of the paintings. In a court filing from 2020, Vincent Gillespie described his father as a renowned artist who left more than 400 valuable paintings when he died.

Gillespie's participation in the events of Jan. 6, 2021, appears well documented, including in photos and videos that helped tipsters identify him, investigators said.

Open-source video and security cameras captured multiple images of Gillespie participating in the riot, according to the Justice Department.

Investigators were tipped off by a former neighbor, the manager of a local hardware store and employees of the town of Athol, where Gillespie attends meetings and pays his tax bills at the town hall. In all, six witnesses independently identified him from images taken from the riot.

In the chaos of the insurrection, Gillespie shoved, yelled and pushed and fought with police, the FBI said. Images included in his court papers show him struggling through the crowd, eventually maneuvering through the rioters to the line of police officers and getting control of a police shield.

He's seen and heard on the body camera of a Metropolitan Police Department officer pushing his way through the crowd, using a police shield to ram officers and screaming "traitor" and "treason" as he points to a law enforcement officer, officials said.

After his arrest, Gillespie, 60, was ordered by a judge to stay away from Washington, except for court-related business. He was ordered not to possess a firearm or other weapons.

Gillespie's next court appearance is scheduled for April 29 before U.S. District Chief Judge Beryl Howell of the District of Columbia.

Contacted by the AP following his arrest, Gillespie declined to comment.

"My attorney advised against it. He said there's only downsides to it," he told the AP. "I'd like to talk. There's a lot of stuff out there that's wrong."

It's not the first time Gillespie has been in court.

Years earlier, Gillespie made local headlines by contesting a $15 parking ticket — despite having to pay $250 in filing fees. He ended up fighting the filing fee, which was not refundable, all the way to the state's highest court in 2011.

He did not receive a refund.