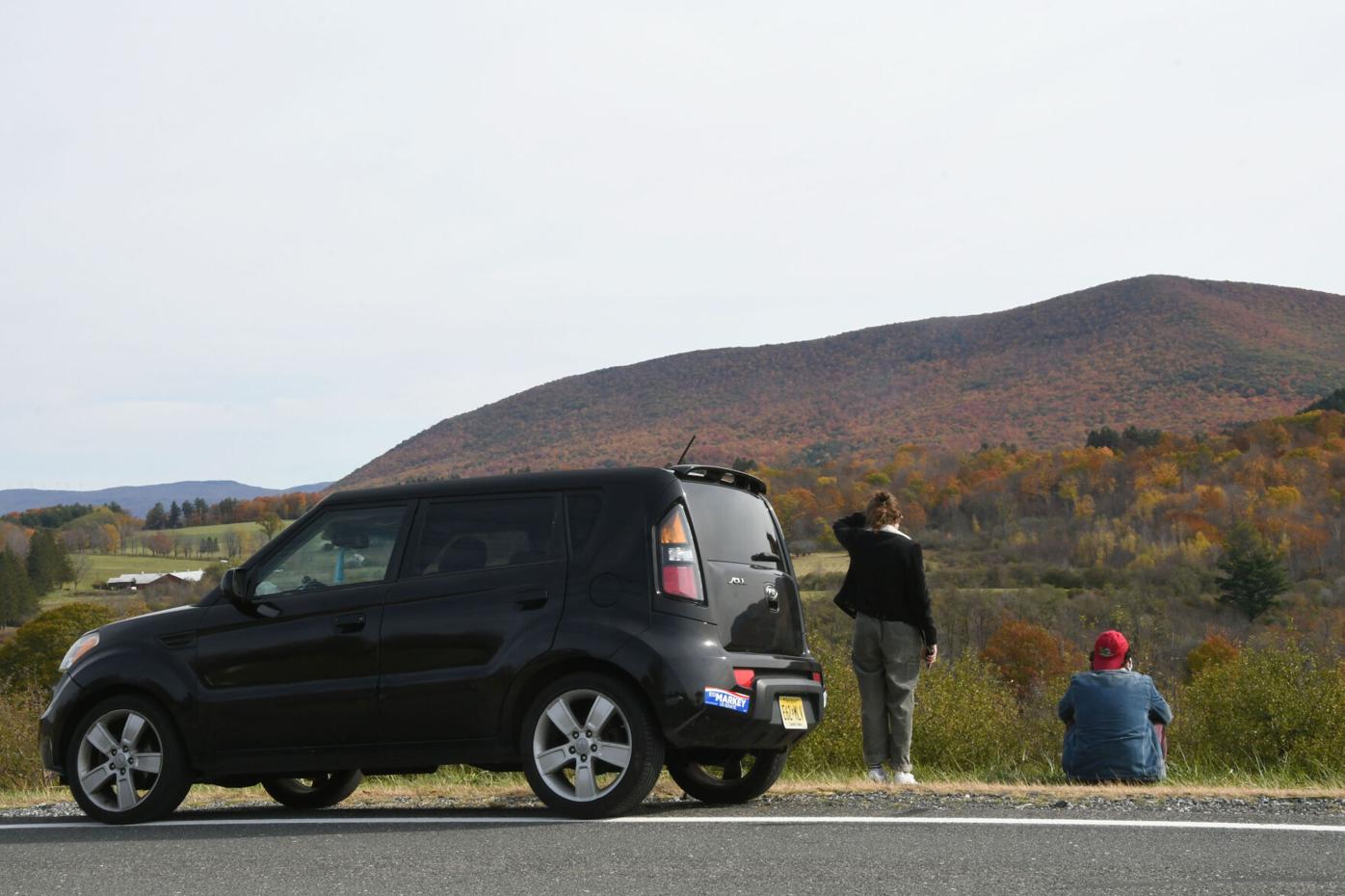 Tourists on Sunday take in the view of the foliage from Route 7 in Williamstown, just south of Mount Greylock Regional School. 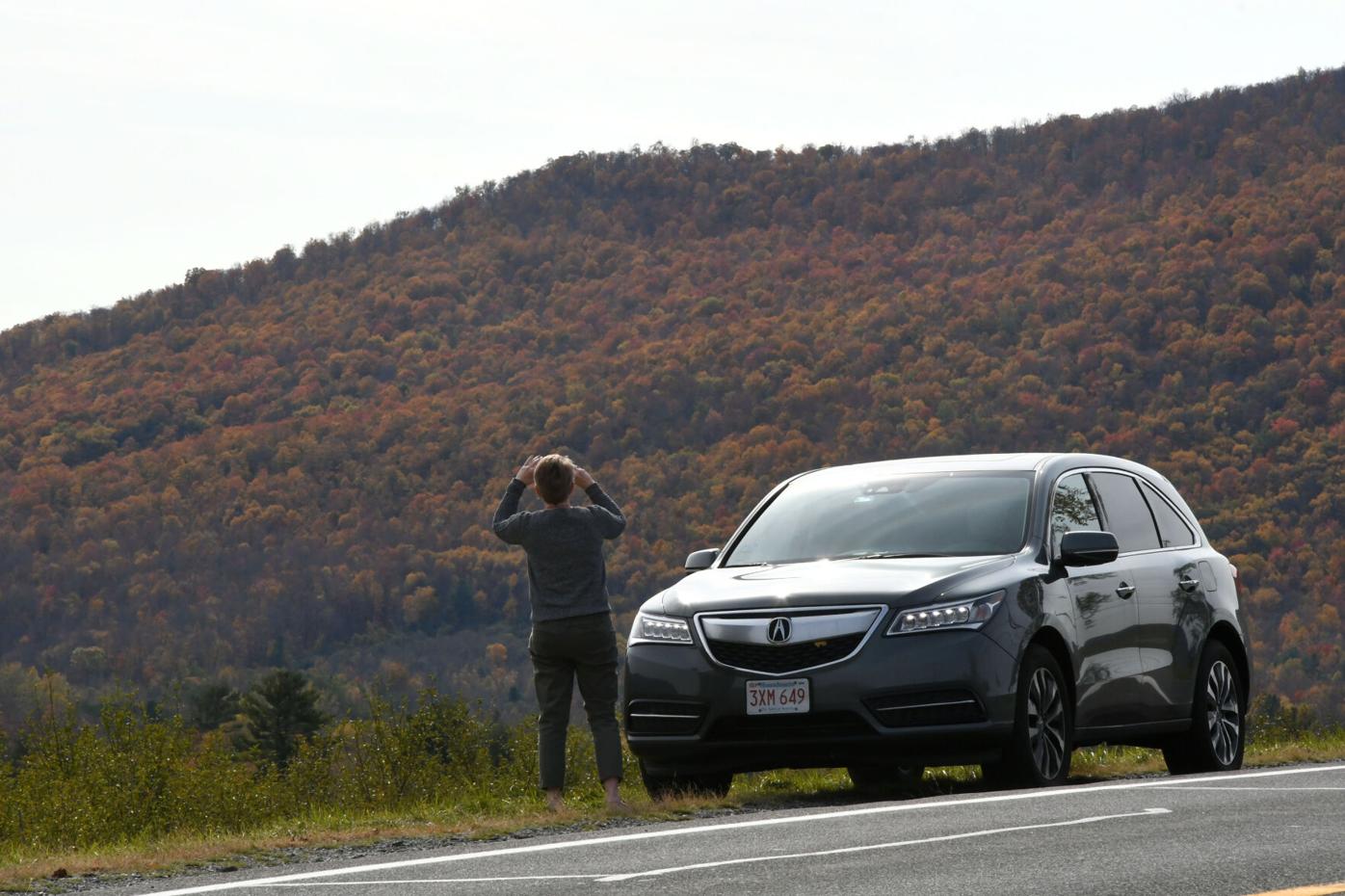 A woman takes a photo of the foliage Sunday from Route 7 in Williamstown, just south of Mount Greylock Regional School, before the five corners.

Tourists on Sunday take in the view of the foliage from Route 7 in Williamstown, just south of Mount Greylock Regional School.

A woman takes a photo of the foliage Sunday from Route 7 in Williamstown, just south of Mount Greylock Regional School, before the five corners.

“'I love autumn,' Emily said to me. 'It wins you over with its mute appeal to sympathy for its decay.'”

It’s the last hurrah for a somewhat muted foliage season, but plentiful splashes of fall color remain from Pittsfield to the Vermont line, especially along the Route 7 hilltop in South Williamstown. No wonder throngs of visitors step out of their cars to glimpse the stunning vista, perhaps the best in the Berkshires other than the Mount Greylock summit.

After a sun-filled though chilly weekend with early morning hoar frost whitening the ground here and there on Sunday, the next few days will seem dank and gloomy, with mostly cloudy skies. But, starting Thursday, mostly clear skies return with a welcome warmup, sending daytime highs easily 10 degrees above the average of 56.

Although most of the Berkshires are still deemed “abnormally dry” by the National Drought Monitor, with a sliver of moderate drought close to the southeastern county line, rainfall so far this month has been only slightly below average for early and mid-October. Raindrops will be few and far between this week, so, water-conservation measures recommended by many communities should be heeded.

This week's weather at a glance

Tuesday: Mostly cloudy, with low odds of occasional showers in the morning or at night, high near 65, low around 50.

Thursday: Best day of the week; sunny near 70, partly cloudy at night, around 50.

Friday: Partly sunny, near 65, mostly cloudy at night, low in the mid-40s.

For Monday and Tuesday, plenty of clouds with only minimal chances of light rain, but it will be mild, especially Wednesday.

By Thursday, sunny skies and remarkably warm for this time of year — nearly 70. Clouds return Friday and into the weekend, but as it looks now, there’s only a slight chance of showers. The end result: We’ll slip further behind on rainfall, now running close to 20 percent below normal for the year so far.

Nationwide, sharp contrasts as the week begins, with temperatures 10 to 30 degrees below average in the Northern and Central plains, and 10 to 20 degrees above average from California, where air pollution problems persist, into the Southwest. Central California Valley locations saw highs near 100 on Saturday. Firefighters will find little, if any, relief as hot, dry conditions continue.

Snow over the Upper Midwest and into the Rockies will make driving hazardous, as will a mix of rain and snow over the rest of the Midwest.

Late this week, a tropical system bears watching, as it may affect Florida and the east-central Gulf states.

Government forecasters at the National Weather Service’s Climate Prediction Center have released their outlook for “meteorological winter” (December through February). It emphasizes persistent drought in nearly half of the continental U.S. The most severe lack of rainfall is in four Southwestern states: Nevada, Utah, Arizona and Colorado.

If you think these long-range forecasts are no better than a coin flip, Neil Jacobs, the acting administrator of NOAA (National Oceanic and Atmospheric Administration), emphasizes the benefits of “improved satellite observations, more detailed computer forecast modeling and expanding supercomputing capacity.”

For the Northeast, the outlook calls for milder-than-normal temperatures, and equal chances of above- or below-normal precipitation. The outlook does not project seasonal snowfall accumulations; snow forecasts are generally not predictable more than a week in advance, NOAA points out.

In the Berkshires and Vermont, it’s a good bet that we’ll be able to enjoy something resembling a ski season, thanks to low COVID caseloads so far. That’s encouraging news for Berkshire residents, but don’t be surprised if quarantine restrictions from “hot spot” regions may hold down the size of crowds. Watch this space for updates over the next few weeks.

Snowbirds heading for Florida, the Carolinas or the Southwest can expect a drier-than-average winter season (which is most unfortunate for the drought-stricken regions) but warmer-than-normal conditions.

It’s a La Niña winter (meaning cooler-than-normal sea surface temperatures in the eastern Pacific), and that means atmospheric patterns should cause the drought to worsen in California, the eastern Gulf Coast, and the southern and central Plains. Drought and abnormally dry conditions are expected to improve in New England, the Northwest and the northern Rockies.

For maps and videos, visit climate.gov/Winter2020.