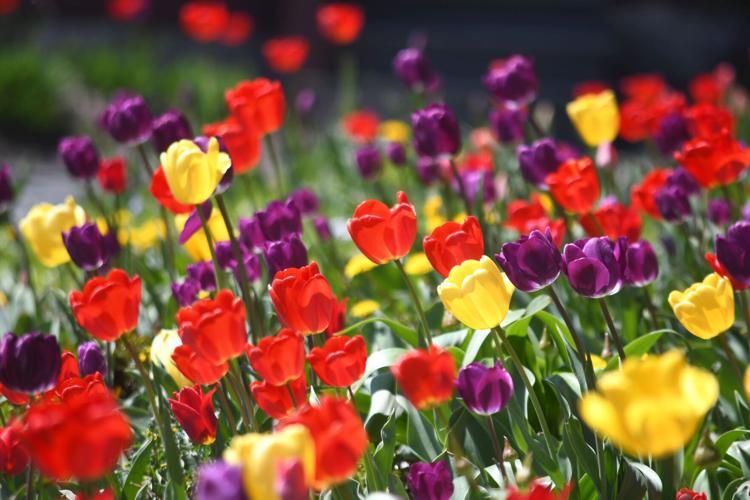 Tulips are late bloomers this year. These colorful tulips are in beds along the front of porches on River Street in North Adams. 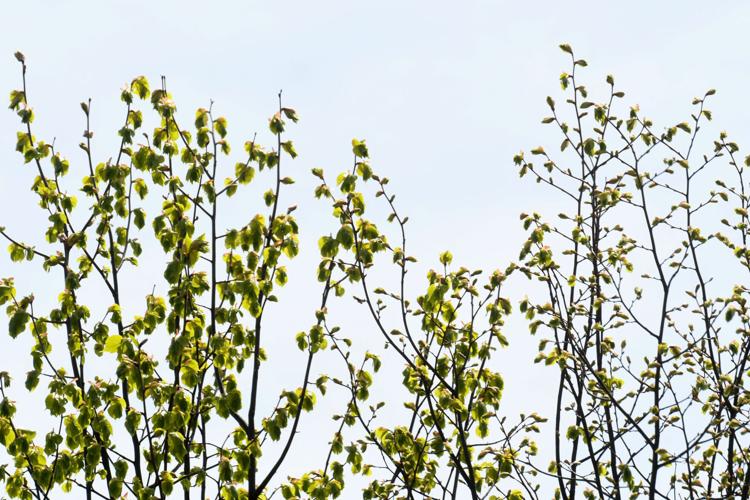 The branches of these trees in Lenox are not quite in full-leaf and a week behind normal. 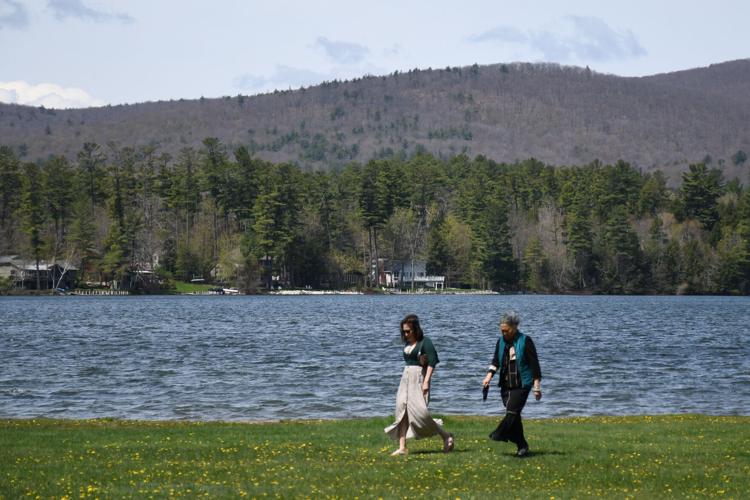 A couple of women walk at Burbank Park in Pittsfield on Sunday. 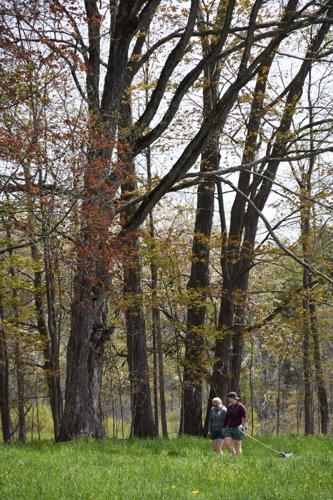 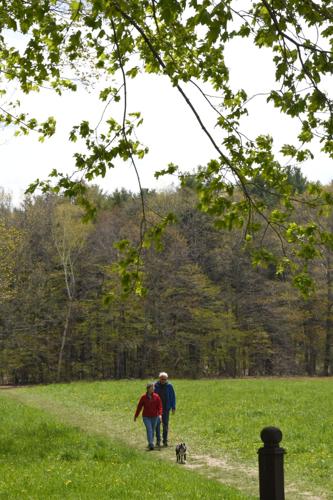 Tulips are late bloomers this year. These colorful tulips are in beds along the front of porches on River Street in North Adams.

The branches of these trees in Lenox are not quite in full-leaf and a week behind normal.

A couple of women walk at Burbank Park in Pittsfield on Sunday.

Spring warmth in New England can seem like the last guest at the party. By late this week, our daytime highs might finally approach the mid-May average of 66, but until then, unusually cool nights and early mornings persist.

While tulips are late bloomers this year and trees in full leaf are about a week behind normal, there is an upside. For the first time since last fall, monthly and year-to-date precipitation totals have shifted above average, wiping out the near-drought that had gripped western New England for the past 12 months.

After Monday morning’s expected widespread rain tapers off, temperatures will top out at least 10 degrees below normal, with sustained sunshine unlikely.

A weak storm system from Ontario will keep Tuesday mostly dry in the Berkshires with just an outside chance of showers, as highs struggle into the 50s. Little change is predicted for Wednesday, but full sunshine returns on Thursday with a slight warmup.

Heading into next weekend, there’s a low probability of scattered showers but it should be clear to partly cloudy most of the time, with highs finally reaching the mid-60s.

The extended outlook for the rest of May from the Climate Prediction Center: Normal temperatures approaching 70 and typical rainfall heading into the final four weeks of spring.

Nationally, while the Florida peninsula remains hot and humid until mid-week rainfall arrives, the rest of the Southeast is likely to endure severe storms, including possible tornadoes, that could cause flash flooding.

Another late-season snowfall is expected in the Northern and Central Rockies as well as the High Plains (portions of Montana, Wyoming, South Dakota, Nebraska, Colorado, Kansas, New Mexico, Oklahoma and the Texas Panhandle), with much colder than normal temperatures.

For this week, South Texas will be the hottest zone, over 100 degrees, while California can expect highs at least 10 degrees above average.

Once again, warm and dry conditions plaguing the Southwest and most of California will raise the risk of wildfire danger. The U.S. Drought Monitor shows more than 75 percent of the West in an official drought, and 21 percent of the total area is at the most extreme level — an exceptional drought.

Anemic winter rain and snowfall has left reservoirs and river flows down significantly, even as the state experiences its driest year in more than four decades. Wildfire fuels in some parts of California are at or near record levels of dryness.

Fuel moisture — the amount of water inside a living plant — “is the lowest that we’ve recorded at these sites since 2013,” said Craig Clements at San Jose State University. “It’s indicative of very dangerous conditions coming into this summer.”

Those hazardous conditions are the result of drier, hotter weather and accelerated vegetation drying due to a warming climate, combined with more than a century of fire suppression, that has left many forests with treacherous amounts of built-up fuel. Those two factors are now amplifying each other, according to Daniel Swain, a leading climate scientist at UCLA and the Nature Conservancy.

“I think, unfortunately, as bad as things have been recently, this year looks like another year that has some really ugly potential,” Swain told NPR.

Many residents are bracing for the possibility this season could be worse.

“Really, that’s just going to be a matter of luck,” Swain said. But “of the aspects that are predictable, they all look pretty ominous.”

Last year, nearly 10,000 California wildfires burned more than 4 million acres — a modern record. Across the West, more than 14,000 structures were destroyed, causing billions in damage. At least 46 people were killed as California, Oregon and Colorado all saw record-breaking “megafires.”

Because of climate change, there’s an official “new normal” from the National Oceanic and Atmospheric Administration. The U.S. is not just warmer, on average, but also wetter in the eastern and central region and considerably drier in the West than just a decade ago.

Scientists calculate climate normals based on 30 years of data to smooth out random swings of daily weather. Every 10 years, NOAA updates for the nation, states and cities — by year, month and season. The new data released last week shows that more than 90 percent of the U.S. has warmer normal temperatures now than 10 years ago.

The increase is relatively moderate in Boston and the rest of Massachusetts, Seattle, the Atlanta region and in metro Phoenix. But the warmup is especially intense in Florida, California, Texas, Virginia, Indiana, Arizona, Oregon, Arkansas, Maryland, North Carolina and Alaska.

New normals are warmer because the burning of fossil fuels is making the last decade “a much hotter time period for much of the globe than the decades” before, according to Cornell University climate scientist Natalie Mahowald.

But some others disagree — Michael Mann of Pennsylvania State University asserts that adjusting normal every 10 years “perverts the meaning of ‘normal’ and ‘normalizes’ away climate change.” North Carolina’s state climatologist Kathie Dello said, “It seems odd to still call them normals because 1991-2020 was anything but normal, climate-wise.”

The greatest impact of climate change continues to be felt in the High Arctic.

Fairbanks, Alaska, less than 200 miles from the Arctic Circle by road, is no longer classified as “a sub-Arctic climate” because of the rising normal temperatures, according to Alaska-based climate specialist Rick Thoman.

For the past few days, the daytime high in Fairbanks has been at least five degrees above the maximum in Berkshire County. Just a quirk for now, but it demonstrates that global warming and climate change are outmoded descriptions. Climate disruption, or “global weirdness,” as some non-scientists call it, fits the bill.

Information from the Associated Press, NPR and Axios was included in this commentary.

"It's May, the lusty month of May / That darling month when everyone throws self-control away." — Alan Jay Lerner (“Camelot,” the 1960 musical)