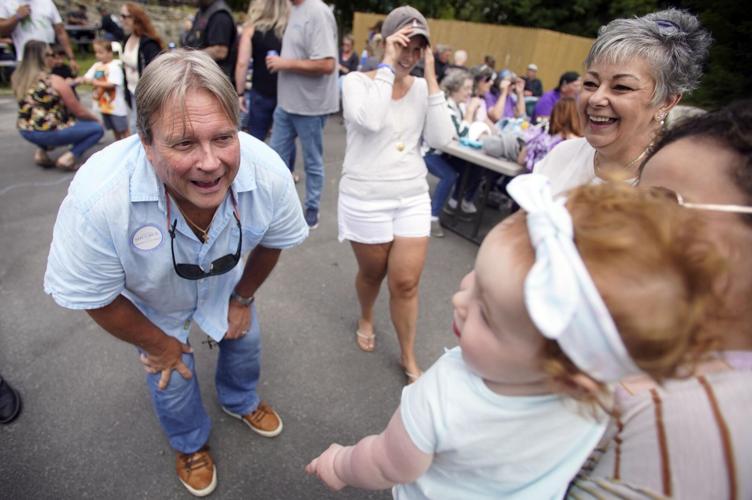 Timothy J. Shugrue campaigns Aug. 13 at the annual Jimmy Ride and After Party in Hinsdale. The ride raises money for the Berkshire Kid's Place, which Shugrue co-founded. 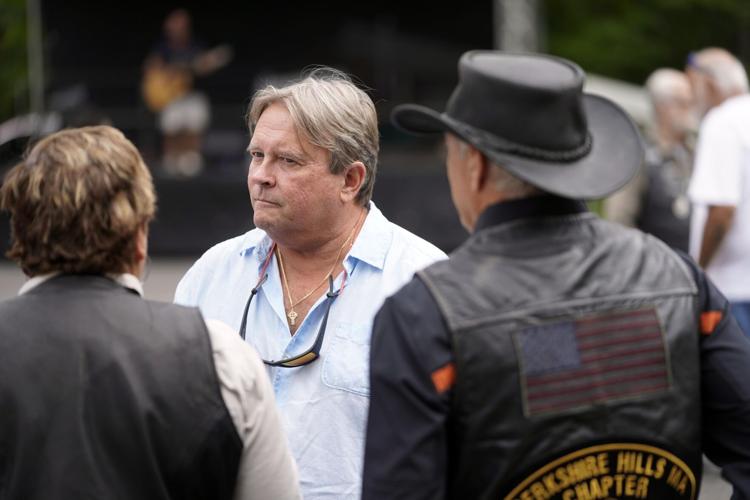 Timothy J. Shugrue campaigns this month at the annual Jimmy Ride and After Party in Hinsdale. 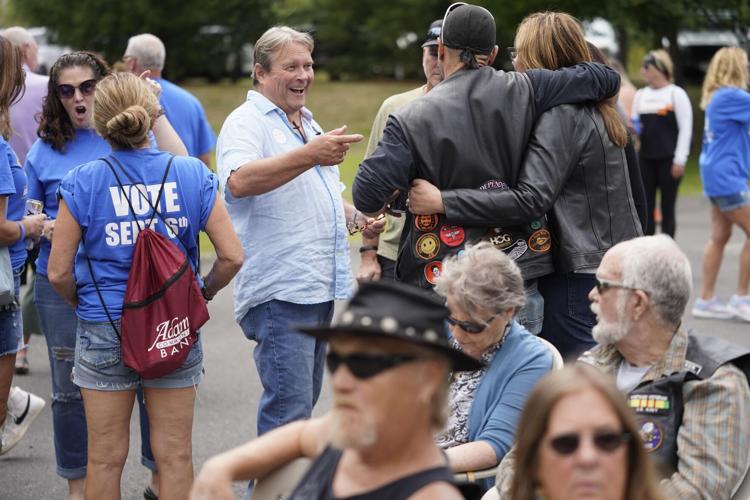 Timothy J. Shugrue campaigns at the annual Jimmy Ride and After Party in Hinsdale. 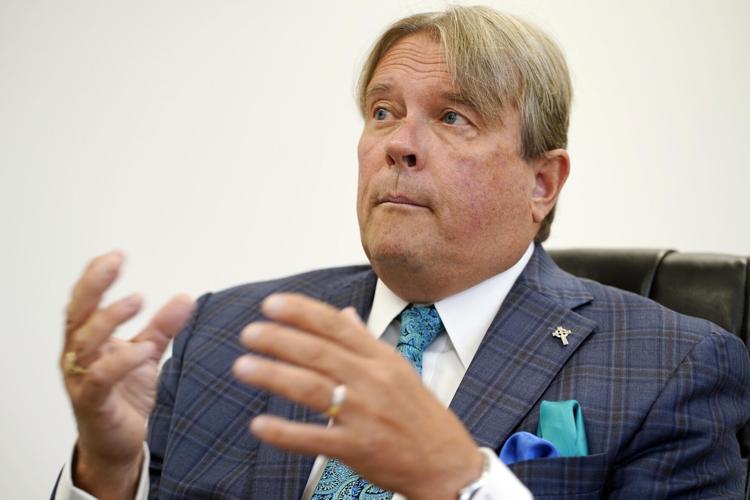 Timothy J. Shugrue, who is running for Berkshire County District Attorney, speaks to The Berkshire Eagle editorial board.

Editor's note: This is one of two profiles of the candidates for Berkshire District Attorney in the Sept. 6 Democratic primary.

HINSDALE — Timothy Shugrue is, above all else, comfortable in a crowd of Berkshire voters.

In recent weeks, the attorney running to unseat Berkshire District Attorney Andrea Harrington has condensed his 36 years as a prosecutor and defense attorney into a bite-sized stump speech. It emphasizes cases won, clients served and relationships forged within the county.

Shugrue and his team have developed a handful of campaign slogans, even as the candidate speed talks through his platform. “Confidence, competence and compassion.” “Justice and equality for all.” “Shugrue for you.”

Those slogans and speeches boil down to a core belief held by supporters and the campaign: After decades on either side of the courtroom, Shugrue has the skills it takes to be an effective district attorney.

Shugrue says his team has been ramping up support ahead of the Democratic primary Sept. 6.

On Aug. 13, Shugrue and his wife and campaign manager, Joann, took the winding roads between their campaign headquarters on Elm Street in Pittsfield and Ozzie’s Steak and Eggs in downtown Hinsdale.

They make their way to the after party for the Jimmy Ride. The annual event memorializes Jimmy Bernardo, a 12-year-old Pittsfield boy who was abducted and killed in 1990. The event, marked each year by a 60-plus-mile motorcycle ride, supports the Bernardo family and raises money for the Berkshire Kids’ Place and Violence Prevention Center.

The founding of Kids’ Place grew out of Shugrue’s legal career. Educated at the Western New England School of Law in Springfield, Shugrue received his law degree in 1986 as laws around the responsibilities of mandated reporters changed.

In his first job out of law school, Shugrue worked as an assistant district attorney for the sexual assault unit in the Hampden County District Attorney’s Office. In 1991, Berkshire District Attorney Gerard Downing brought Shugrue back to the county to prosecute the Berkshires' backlog of sex crimes.

That same year, he began traveling as part of a teaching opportunity with the University of Houston Law Center’s National College of District Attorneys.

During one of his teaching trips he visited Huntsville, Ala., and saw the National Children’s Advocacy Center created by former Alabama congressman Robert “Bud” Cramer, then a district attorney. Inspired by the model, Shugrue said he took the “blueprint” back to Pittsfield and created the Kids’ Place in 1991.

For 15 years, Shugrue sat on the organization’s board, helping to usher it through incorporation and establishing it in its current home on Wendell Avenue in Pittsfield. Though he’s officially stepped away from the organization, he’s still dedicated to making the center a success.

In 1994, after three years in the Berkshire District Attorney’s Office, Shugrue left prosecution — burnt out after trying some of the worst kinds of cases. He opened a private law practice on South Street in Pittsfield.

As the Shugrues drive to the after party in Hinsdale, they’re greeted by people from this portion of Shugrue’s career. They include neighbors and friends, law enforcement figures who worked the Bernardo case with Shugrue and advocates for survivors of child abuse and violence.

He tells a set of attorneys that his daughter Caitlin, an assistant district attorney in Essex County, has been instrumental as well. Shugrue says they talk regularly about her work and prosecution. The conversations reminded him of what he loved about being a prosecutor, which made him receptive to the idea of running.

“I was happy with what I was doing business-wise, but everyone was saying 'Tim you’ve got to do it,'” he says to a voter. “You know that your community needs you.”

Shugrue, working his way from group to group, recounts what he says he’s heard from the law enforcement community about their relationship with Harrington’s administration.

“I saw everyone was so frustrated,” Shugrue says. “They don’t want to do the investigations anymore because they feel like nobody’s listening to them.”

Shugrue says he wants to take management of the office back to the “old days,” when he and other assistant district attorneys would meet up with local police departments and play softball, forging working relationships outside the court house.

He talks about major training initiatives not only for office staff, but with local police departments as well.

Shugrue says he’ll train staff to hone their prosecutorial judgment and will do away with what he calls Harrington’s “blanket policies” on some low level criminal offenses.

Throughout the campaign, he’s emphasized that he’ll “sweat the small stuff,” using low level offenses as a way to connect defendants with pretrial diversion programs. He says for cases involving substance use or mental health, this will be particularly key.

“Every case has its own DNA, just like you have your own DNA,” Shugrue says to one group of bikers. “We’re such a small county that we can still treat those cases on a day-to-day basis and we treat them equally and with justice.”

A recap of news from political campaigns in the Berkshires ahead of the Sept. 6 primary.

The unions say the current district attorney has failed to address gun violence throughout the county. A spokesman for the district attorney suggested her opponent's opposition to police reform legislation is a factor in winning the police union endorsements.

Berkshire residents are voting today in primary elections. Here's what you need to know

Berkshire voters will be making decisions on key races Tuesday. Who is on the ballot and where do you vote?

Timothy Shugrue, Berkshire County's next district attorney, speaks about his plans for the next four years

Timothy J. Shugrue has a series of tasks to accomplish in the months before he becomes the new Berkshire District Attorney: close down his private defense practice, finalize a transition team and develop new office policies. At the top of Shugrue’s list, when he takes office in January, will be watching his staff in action in the courtroom.