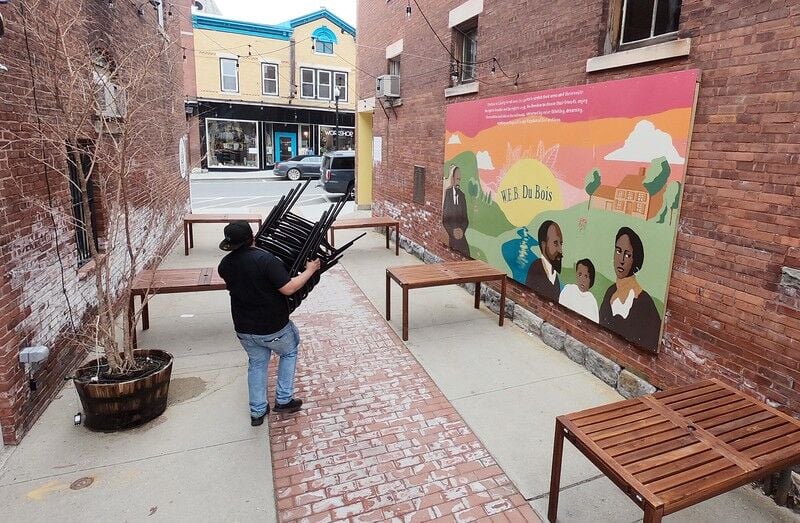 Jonas Gutierrez prepares outdoor tables Wednesday in an alley adjacent to 20 Railroad Wood Fired Pizza on Railroad Street in Great Barrington. The partial closing of the street for outdoor dining last summer was popular with a lockdown-weary public. 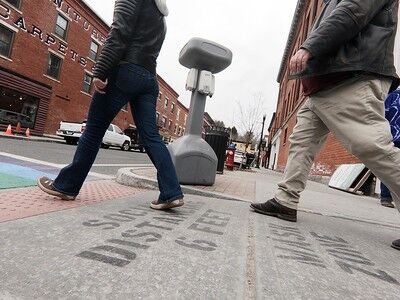 Pedestrians pass a hand sanitizing station Wednesday on Railroad Street in Great Barrington. Merchants told town officials at Monday’s Select Board meeting that removing parking and allowing traffic to flow along one side of the street during outdoor dining last year was not only disruptive to some commerce, but also was dangerous. 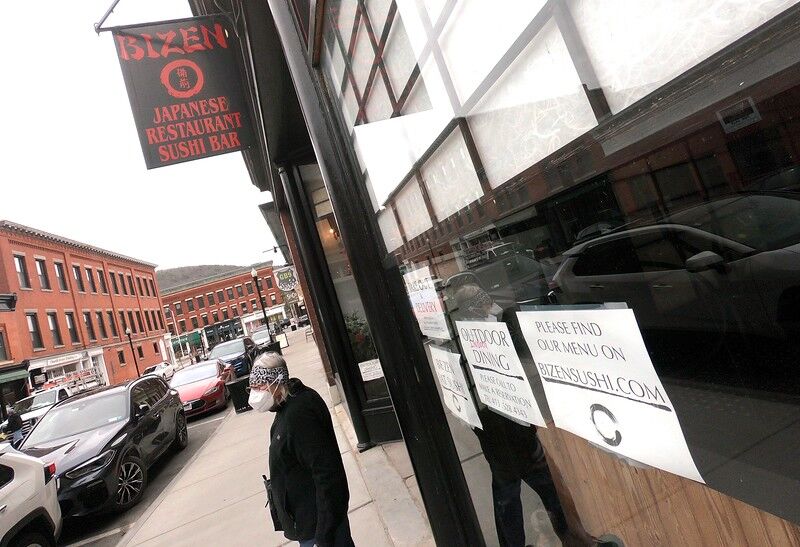 A woman stands outside Bizen Gourmet Japanese Restaurant and Sushi Bar on Railroad Street in Great Barrington on Wednesday. One merchant on the street said several servers at Bizen nearly had been hit as they carried food to tables set up on one side of the road during outside dining last year.

GREAT BARRINGTON — The partial closing of Railroad Street for outdoor dining last summer was popular with a lockdown-weary public, and the town is going all out this year by adding a regular live music program and stringing festive lights.

But, merchants told town officials at Monday's Select Board meeting that removing parking and allowing traffic to flow along one side of the street was not only disruptive to some commerce, but also was dangerous.

Karen Allen, who owns Karen Allen Fiber Arts, told the board that she and other merchants are asking for a compromise that would shut down the street at 5:30 p.m. on Friday and Saturday nights, rather than at 4 or 5 p.m. She said that, before the street shutdown, the hours of 4 to 6 p.m. were "productive" at the store, and that "we had not one customer walk into our store" during outdoor dining.

Allen also said that, visitors in particular are taken by surprise when they turn onto the street and suddenly are squeezed into one lane. They often drive too fast, she said, and several servers at Bizen Gourmet Japanese Restaurant and Sushi Bar nearly had been hit as they carried food to tables set up on one side of the road, she added.

"That lane of traffic there amidst people dining and people crossing the street to serve people — it's very dangerous," Allen said.

"I saw startled faces, near-accidents," said Erik Bruun, who owns SoCo Creamery, the ice cream shop across from Allen's store. Nevertheless, he said, the initiative is a good one.

"The spirit was there; there are a couple of wrinkles on the implementation, and you're taking a look at it, as good, solid managers would do," he added.

Richard Stanley, who owns several buildings downtown and the Triplex Cinema, said the outdoor dining idea was a hit, but he agreed that the road situation is a hazard. He suggested placing signs for drivers at the head of the street, and adding temporary speed bumps to the open lane.

Town Manager Mark Pruhenski said the town has hired engineers to brainstorm safety fixes there, including adding crosswalks so it isn't a "free-for-all."

Will outdoor dining save Berkshires restaurants?

In Great Barrington, workers string overhead party lights between the brick buildings in the alley linking Railroad Street and the Triplex parking lot.

Town officials arranged the outside dining here in late June, after three months of hard lockdowns, and continued restrictions that dealt deep cuts to restaurants during the high season. The town received state funding for such pandemic-related improvements that foster outdoor, socially distant activity, and has a balance of $52,000 to pay for outdoor dining enhancements.

The plans for summer also feature a live music program, Berkshire Busk, which will expand and organize performers from late June through July and August, Pruhenski said.

The town also will add planters with lattices and casters to the area.

Allen said retailers would like better communication with the town as plans progress, and Pruhenski said he would work on that desired compromise of a later street shutdown time.

Last call: A toast to the hangouts, watering holes and favorite restaurants we lost during the pandemic

These local landmarks filled our bellies, hearts and towns with more than food — some are where couples marked every wedding anniversary, others gave neighbors a good spot to land on Friday nights to catch up — they also gave us a collective sense of what makes the Berkshires. From farm-to-table fare, to killer French fries, extra-large omelets and homemade dumplings, these are the dishes we'll miss, from the places we loved. Here, restaurant owners aren't just names, but the people who greet you at the door, or cook your meal to order in a small kitchen. They know your name, your regular order and your community.

We raise a glass to all those who turned off the lights this past year, poured their last pint and flipped their last burger. Cheers — here's to better days ahead, we hope.