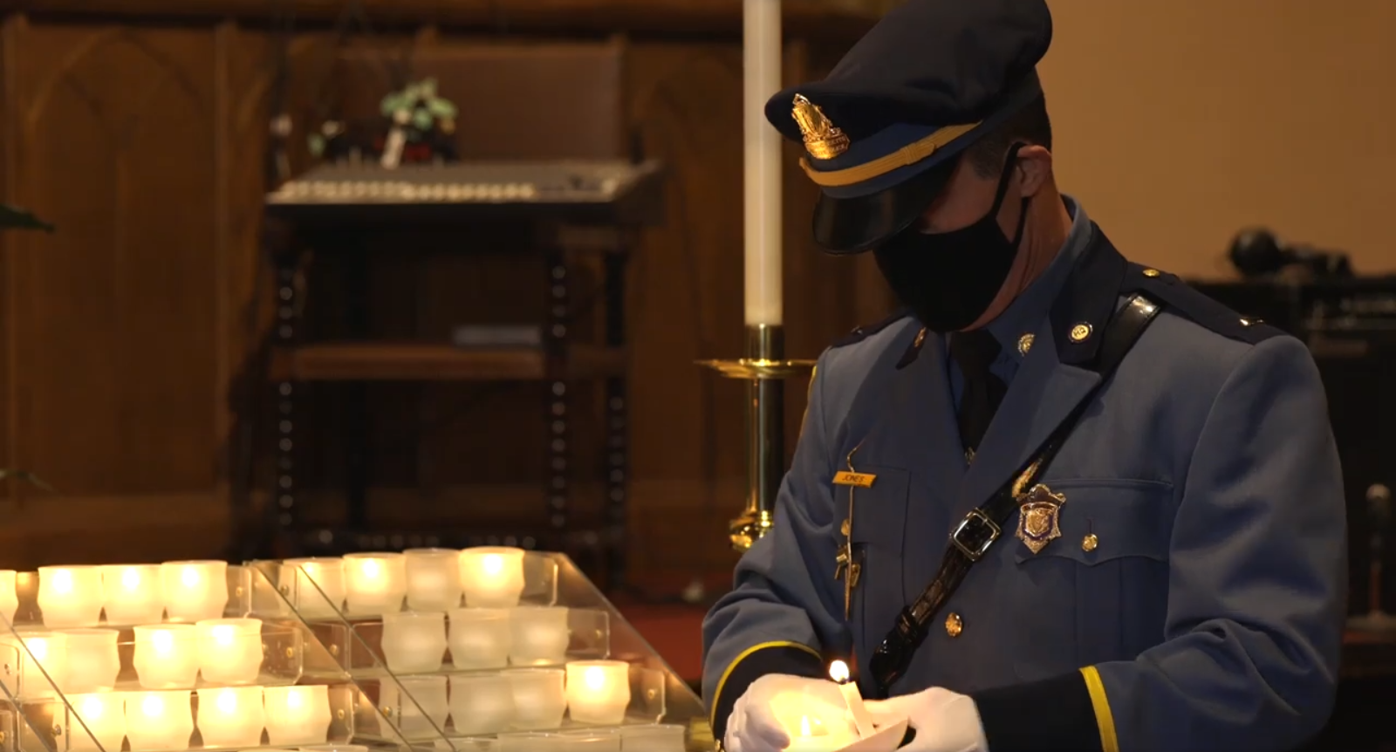 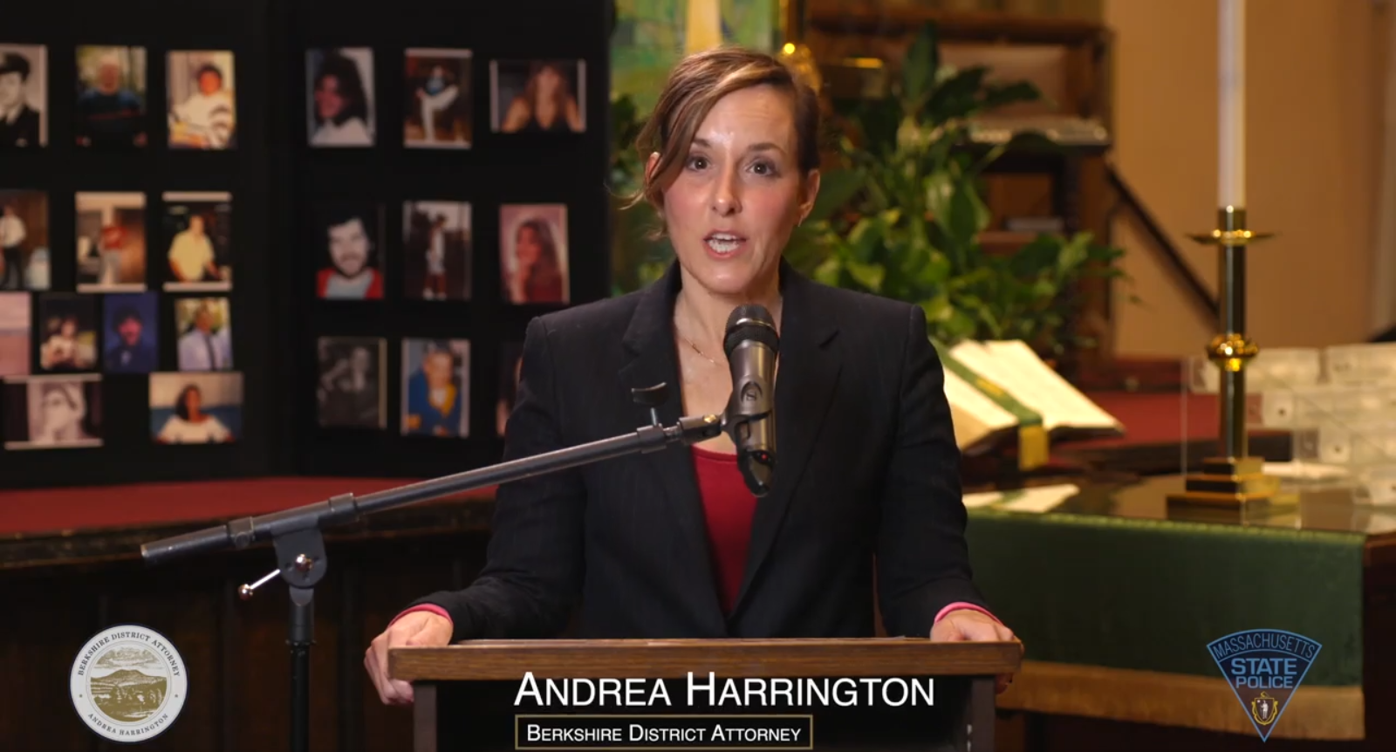 Berkshire District Attorney Andrea Harrington speaks during a video address as part of the 33rd annual “A Candlelight Vigil of Remembrance and Hope,” which aired Sunday. The event is typically held in-person, but was presented in a video format this year due to the COVID-19 pandemic. 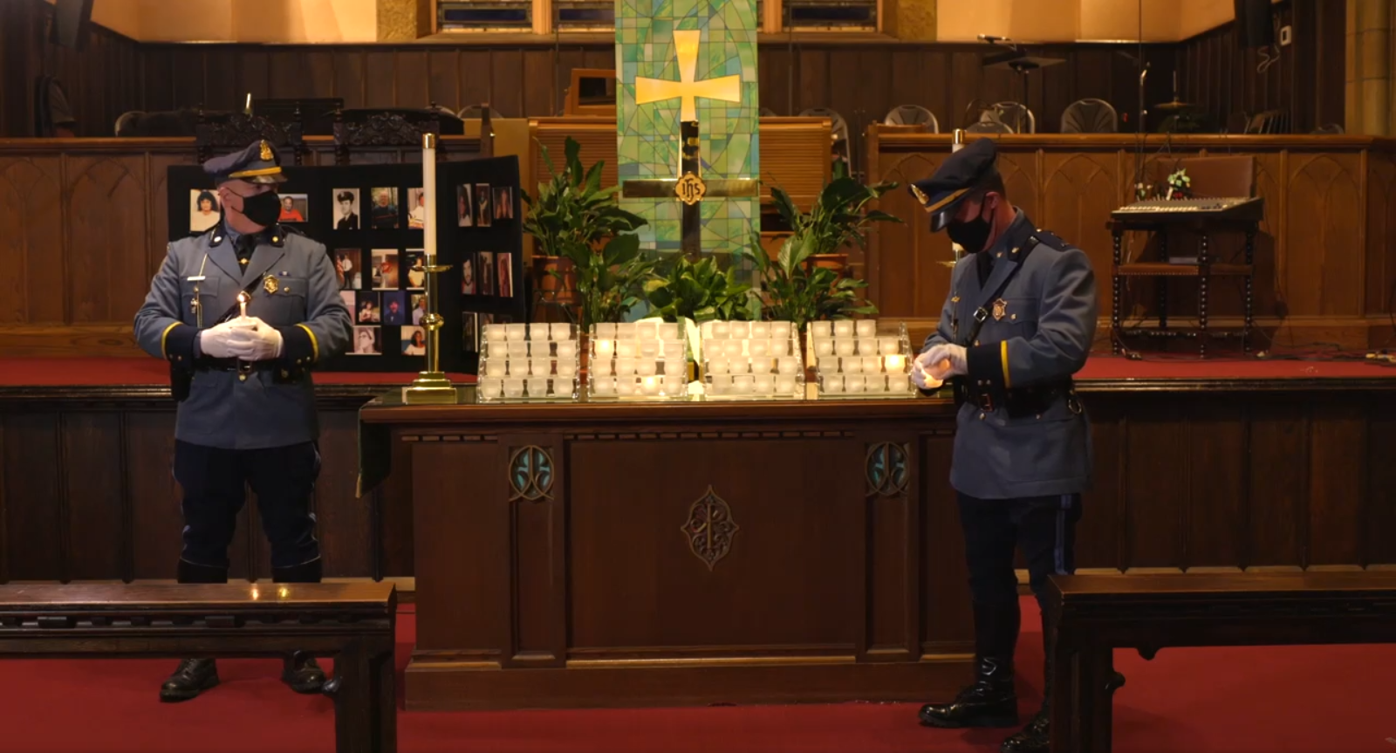 Berkshire District Attorney Andrea Harrington speaks during a video address as part of the 33rd annual “A Candlelight Vigil of Remembrance and Hope,” which aired Sunday. The event is typically held in-person, but was presented in a video format this year due to the COVID-19 pandemic.

PITTSFIELD — The setting and delivery differed, the message was the same: remember and honor victims of drunk drivers.

The 33rd annual “A Candlelight Vigil of Remembrance and Hope” was virtual on Sunday afternoon, due to the coronavirus pandemic. Pre-recorded at First United Methodist Church, the vigil was posted on the Facebook, Instagram and YouTube accounts of co-sponsor, the Berkshire District Attorney’s Office.

Traditionally, the vigil is held in-person at 3 p.m. on the first Sunday in December at St. Stephen’s Episcopal Church in Pittsfield. It is mainly attended by family and friends who lost a loved one in an drunken driving crash.

Instead, the remembrance event was held in front of computer screens and cellphones.

“We hold this annual event because it’s important to remember the good times that we shared with those that we loved,” said Berkshire District Attorney Andrea Harrington. “These people loved us and inspired us and we honor them today.”

The vigil — organized by DA’s Office and Mothers Against Drunk Driving, or MADD, and in conjunction with the Massachusetts State Police — began in 1988 to call attention to the deadly consequences of drinking alcohol and getting behind the wheel.

Typically, friends and/or relatives of the deceased in attendance approach the array of candles in front of the church altar, lighting them in silence. If no one came forward, either of two state troopers on hand did the honors. On Sunday, troopers Lt. Brian Berkel and Lt. Stephen Jones lit all 53 candles as the names were read and, if available, the photos of the victims were show on the video.

The Grace Notes, the a cappella group from Miss Hall’s School, continued their tradition of honoring the victims in music by singing “A Hanukkah Celebration” and “O Holy Night.”

The final candle was lit on behalf of Joyce Wrend, a co-founder of the Berkshire County chapter of MADD. The North Adams woman is the mother of 18-year-old Allison Wrend, killed in 1990 while a passenger in a car driven by someone who was intoxicated.

Those we love are never really lost to us--

we feel them in so many special ways--

through friends they always cared about

and dreams they left behind,

in beauty that they added to our days...

in words of wisdom we still carry with us

and memories that never will be gone...

are never really lost to us--

for everywhere their special love lives on.

“Don’t believe time heals all wounds, because it doesn’t. What time does is provide space to be accustomed to your new, normal life without your beloved family member,” Wrend said in a statement read by John Giracca, a motor vehicle homicide victim advocate in the DA office.

“I can not imagine having to call your family and tell you your loved one won’t be returning home. I can not imagine the anger you must feel, knowing someone’s poor decision was responsible for your suffering,” she said.

“I can imagine standing with you to fight future loss,” Kostyun added. “I can imagine a world that isn’t affected by drunken driving — a world without more victims.”

Benjamin Heim, a junior at Lenox Memorial Middle and High School, chose to read Amanda Bradley’s “Love Lives On,” a poem of inspiration and hope.

And despite the somber tone for much of the event, there is hope that drunken driving deaths will continue to decline. In 1982, Massachusetts had 659 traffic fatalities, out of which 407, or 62 percent, involved alcohol. By 2007, total traffic fatalities dropped to 417 and only 146 of those deaths, or 35 percent, were alcohol-related, according to the National Highway Transportation Safety Administration. Since then, the yearly average has been 145, or 40 percent of all traffic deaths in the commonwealth through 2017.