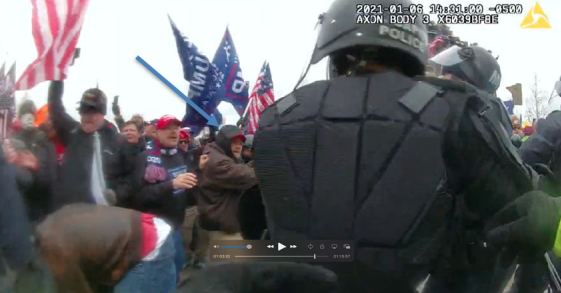 This image, submitted as part of a court filing by an FBI special agent, shows Troy E. Sargent in a crowd of people at the U.S. Capitol in Washington on Jan. 6. A blue arrow appears in the center-left area of the photo and indicates Sargent. 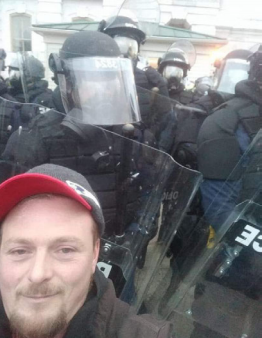 A selfie taken by Troy E. Sargent, then later removed from his social media, shows him to have been present at the U.S. Capitol in Washington on Jan. 6, 2021, according to a report by an FBI special agent. He pleaded guilty Monday to charges and will be sentenced in October.

Troy Sargent of Pittsfield took to social media after the Jan. 6 uprising to say he’d twice struck “a rookie cop.”

On Monday, after failing to get a judge to dismiss charges brought against him two months after the insurrection, Sargent pleaded guilty to assaulting law enforcement officers at the U.S. Capitol.

According to the U.S. Attorney’s Office for the District of Columbia, Sargent was warned that afternoon at the Capitol, at precisely 2:31 p.m., not to assault anyone. The minute before, he’d come forward out of a crowd on the building’s grounds and hit an officer, authorities say.

One year later: Where are the cases of three Berkshire County men charged in connection with Jan. 6 Capitol riot?

“Do not start attacking people,” a different officer warned Sargent and others in the crowd.

He did not comply, the government says.

“Sargent again advanced toward the front of the crowd and swung his open hand towards the same officer,” the U.S. Attorney’s Office said Monday.

“This time, he made contact with someone else in the crowd.”

Nonetheless, in a social media message, Sargent would later say, “I got two hits in on the same rookie cop,” the government said.

That message enabled prosecutors to claim “Sargent intended to make contact with the same officer.”

As The Eagle has reported, Sargent was a regular presence at weekly pro-Trump rallies in Pittsfield before the 2020 election. Before the Jan. 6, 2021, insurrection, he posted that he planned to attend events in Washington, D.C.

Sargent was the only one of three Berkshire County residents implicated in the insurrection who was charged with physically assaulting police.

The case against him was assembled in part through video evidence. Images captured on body cameras depicted Sargent swinging at an officer with his right fist, at one point striking a person in the crowd, according to special FBI agent Tony LaCasse.

Last year, Sargent unsuccessfully petitioned a federal judge to dismiss the matter. He claimed the case against him was not specific enough.

On Monday, he pleaded guilty to six counts, including felony charges of assaulting, resisting, or impeding officers and civil disorder, the U.S. Attorney’s Office said, as well as four misdemeanor offenses.

Sargent will be sentenced Oct. 3.

The statutory maximum sentence is eight years in prison for “assaulting, resisting, or impeding officers,” the U.S. Attorney’s Office said, and up to five years in prison on the civil disorder charge.

The office said the four misdemeanors expose Sargent to the possibility of 3½ years in prison.

How much of that penalty he will actually receive is up to a U.S. District Court judge.

As of Monday, more than 840 people have been arrested in connection with the breach of the U.S. Capitol 17 months ago. Of those, more than 250 have been charged with assaulting or impeding law enforcement, according to the U.S. Attorney’s Office.

Our Opinion: Trump's misled followers are facing consequences — and so should he

Earlier this week, a Pittsfield man pleaded guilty to attacking multiple law enforcement officers while participating in the Jan. 6, 2021, U.S…