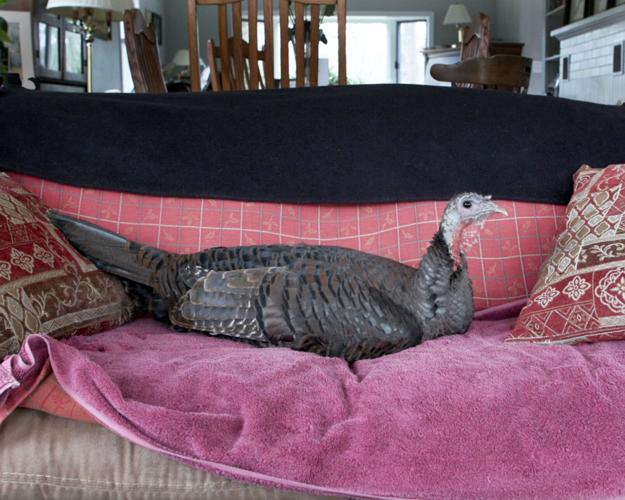 "Turkey Town," a documentary by filmmaker Aynsley Floyd, covers the reintroduction of the wild turkey to Massachusetts in the 1970s. Wherever the birds now roam, their ancestors all hail from a flock placed half a century ago in a forest in Great Barrington. The birds featured in the film include "Waddles," this pet in a Dunstable household. 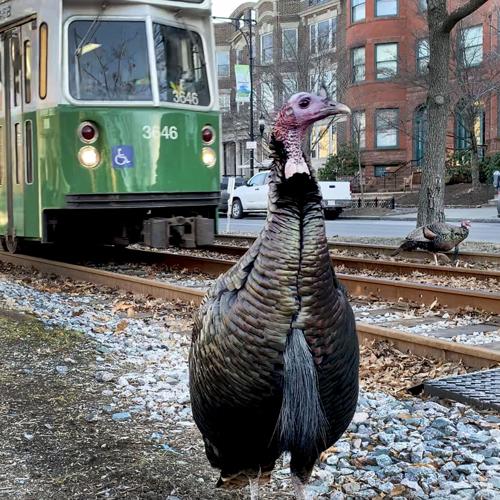 Experts cited in "Turkey Town" hail a 1970s restoration effort as one of the most effective wildlife conservation projects of the 20th century. The state estimates there are more than 25,000 wild turkeys in Massachusetts today, all stemming from the flock of 37 in Great Barrington. 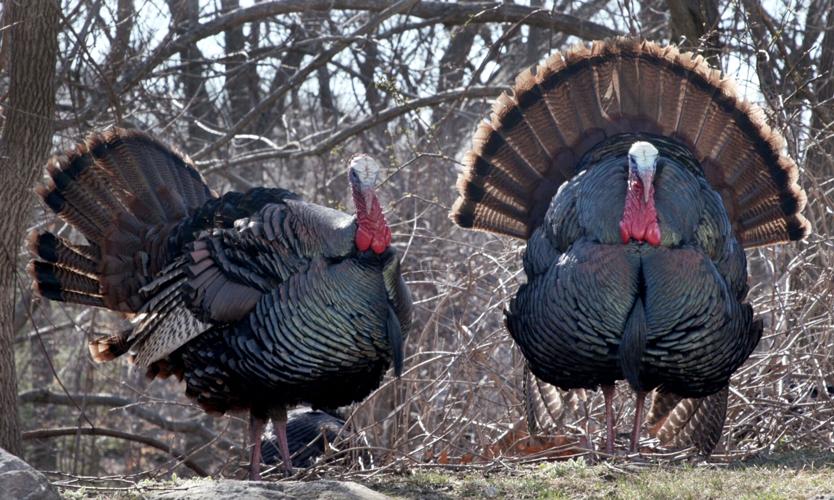 A breakthrough in the restoration of wild turkeys in Massachusetts came in the early 1970s, when wildlife conservationists partnered with the state of New York to snare wild turkeys and bring them back across the border. The first flock, a group of 37, landed in Great Barrington. 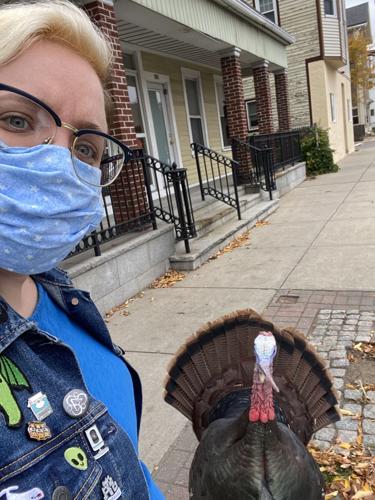 The documentary explores the fact that wild turkeys have become commonplace in suburban areas in Massachusetts. Dana Berube, who lives in Somerville, caught this selfie with bird. 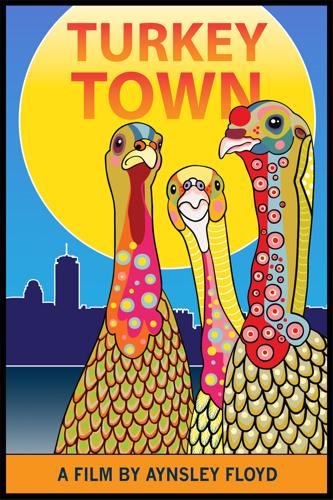 A promotional poster for the documentary. 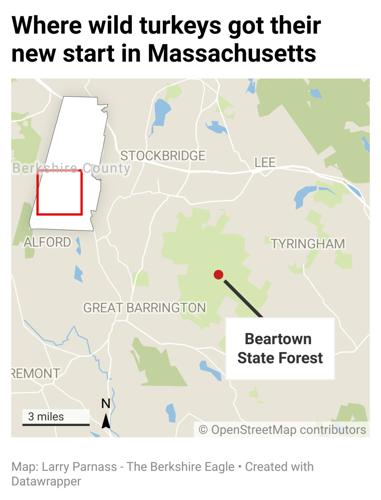 When the state of Massachusetts was young, wild turkeys roamed its woods and fields. By 1851, the last of the wanderers had been shot and stripped of its feathers.

For over a century, the “wild turkey” was a thing of the past in Massachusetts, due in part to habitat loss. Efforts to revive the species began in the early 1900s, using pen-raised turkeys. They failed.

Then, in the early 1970s, a sliver of hope arrived: Wildlife conservationists partnered with the state of New York to snare wild turkeys and bring them back across the border. The first flock, a group of 37, landed in Great Barrington.

A PBS documentary, “Turkey Town,” directed by filmmaker Aynsley Floyd, details the reintroduction of wild turkeys to the state. Facts about wild turkey biology and conservation history are interspersed with crowd-sourced clips of the birds as they exist now — in urban and suburban areas.

Every wild turkey in Massachusetts today, whether scouting woods or terrorizing the suburbs east of the I-495, can be traced back to the birds relocated half a century ago from New York to Beartown State Forest in the Berkshires.

The subsequent population “explosion” of wild turkeys is credited to the 1970s relocation. Some experts in the documentary hail it as one of the most effective conservation efforts of the 20th century. The state estimates there are more than 25,000 wild turkeys in Massachusetts today, all stemming from the flock of 37 in Great Barrington.

“The success was beyond the biologists’ wildest dreams,” Floyd said.

The filmmaker says she became curious about the turkey boom, having grown up in Concord and never seeing wild turkeys in those days. After returning to the state years later, she found it “up to its eyeballs” in wild turkeys — and says she wanted to learn why.

James E. Cardoza, a retired MassWildlife biologist, describes in the film how that 1970s relocation worked. It employed a system of “cannon nets,” an apparatus that used mild explosive charges to propel large netting over groups of turkeys to snare them. A demonstration of the technology can be seen in the film.

The best footage available of that conservation effort was provided by John Moran, son of Eugene Moran, who served as western district manager of the Department of Fisheries & Wildlife from 1956 to 1973. The Moran family lived in Dalton; John and his brothers were graduates of Wahconah High School.

Eugene Moran was the only conservationist to film the efforts. John Moran had his own son help him convert the old footage to DVDs. On top of that, Moran's father had amassed thousands of photographs, which he would show at sporting clubs and organizations in his spare time.

“I don’t have that many more films, but I have an awful lot of slides,” Moran said. “It’s good that they can be appreciated now.”

John Moran also has his own story about a turkey encounter, one that garnered a lot of attention after it was filmed by the Cape Cod Times. One day in 2011, he was filling in on a mail route during his time as a postal carrier in Centerville, when a wild turkey struck.

“I looked in my rear-view mirror and thought ‘Uh oh, here comes the turkey,’” Moran said. “It started attacking the truck from all sides. The tires, the windows. If the door hadn’t been closed, he probably would have attacked me.”

Moran knew about the turkey ahead of time from the carrier who normally delivered on the route, but he wasn’t expecting the publicity. The clip was featured on the "Today" show. Ethel Kennedy, widow of Robert F. Kennedy, claimed responsibility for the runaway bird, saying that she had bought two wild turkeys to educate her grandchildren.

“I was pretty famous around here for a while,” Moran said. “Then people forgot about it.”

To this day, Moran’s working theory is that the turkey had a girlfriend in the woods and thought it perceived the giant truck, with its red, white and blue stripes, as a rival.

The documentary often dissects the behavior of misunderstood turkeys. Much of the agitation they display is a result of their pecking order, a dominance hierarchy common among birds. As they’ve meandered into populated spaces, they’ve tried applying that pecking order to people living there. The Commonwealth provides a webpage to help residents avoid conflict with wild turkeys.

The film also explains why turkeys have moved into these populated spaces, detailing their diet and the way they are able to find food and shelter in gardens and lawns around suburbia. Eating seeds, nuts and acorns from local trees keeps them coming back for more.

“We’ve inadvertently created these spaces that are very inviting to them,” Floyd said of suburban habitats. “These animals do live and thrive in populated areas.”

Floyd wanted the documentary to be about more than just historical facts. The 30-minute film examines co-existence between humans and turkeys and explores the way some people have embrace them, while others vilify them.

“They bring out so many feelings in people, ranging from disgust and fear to joy and celebration,” Floyd said. “They really have a polarizing effect.”

The film documents those who live amid populations of wild turkeys. Carter J. Carter, an Ashfield resident, talks about his environmentally sustainable efforts to hunt the turkeys in the film.

“Things have to die for me to be alive,” Carter said. “Being able to kill a turkey and take that animal out of the wild I tend to regard as the most ethical way to consume almost anything, particularly meat.”

Put your bird feeders out now to attract a wide variety of birds, but please don't feed the wild turkeys

Hunting licenses provide a major source of funding for conservation efforts in the state, Floyd said, and she felt it wouldn’t be possible to make a story about wild turkeys without including that aspect. She was happy to find a hunter who approached the sport in a thoughtful way.

Carter discusses what he views as the relative mercy and quickness of hunting. “Every wild animal dies an awful death,” Carter said. “Every single one. We don’t see it. It’s easy for those of us who aren’t super immersed in nature to disavow that fact.”

Lauren Mann Chaney, a music instructor in Dunstable, takes viewers into her home and introduces us to Waddles, her pet turkey who sits during classes in her living room.

There are also biological and scientific facts. A segment features illustrator Caroline Barnes. She describes the birds as “iridescent, somewhat reptilian,” and draws artwork that reflects that.

That includes renderings of the major and minor caruncles (fleshy bumps that run up and down a turkey’s neck), the snood (an extension of flesh that runs over the beak), and the wattle or dewlap (the flesh that hangs off the turkey’s neck, colloquially the gobble.)

Floyd says the birds are here to stay.

“At the end of the day, it’s a story about people getting along with wild animals and making room for them,” Floyd said. “The onus is on the people to change.”

The documentary will be aired at 9 a.m. and 1 p.m. on Thanksgiving Day on WGBH, and also available on the PBS website.