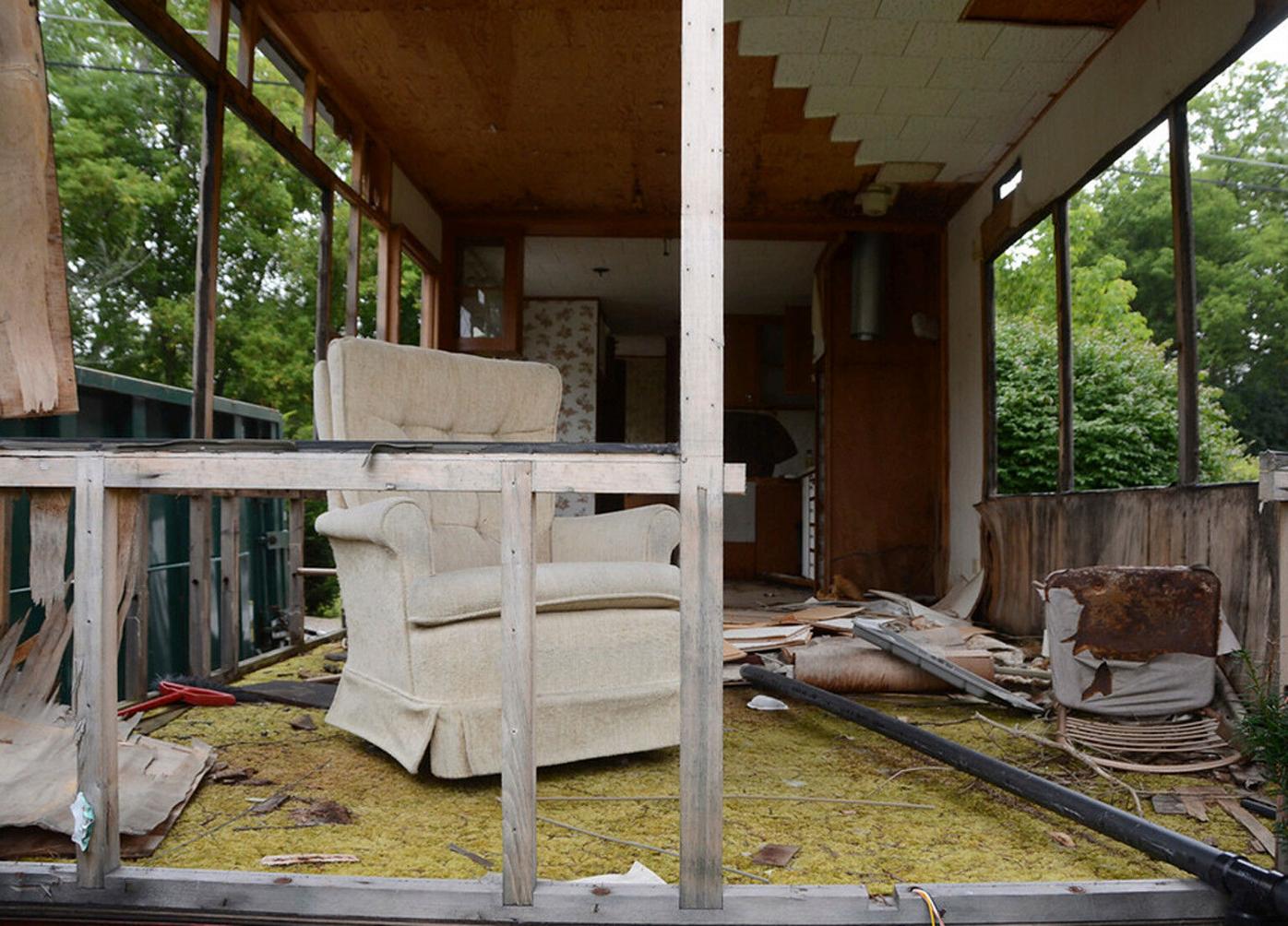 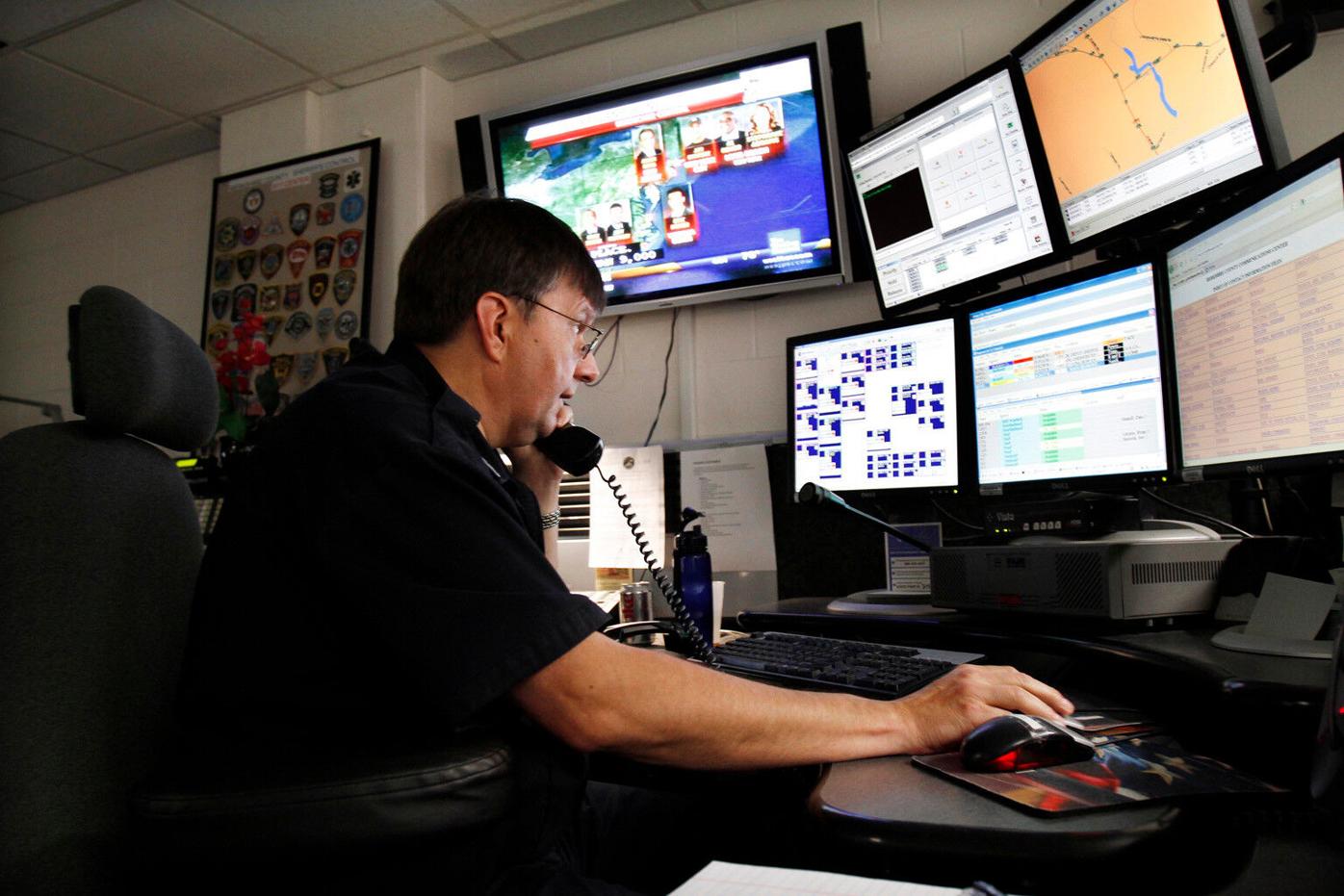 In the event of power outages in police stations in Berkshire County due to Hurricane Irene, the Berkshire County Sherriff's Communication Center in Pittsfield will act as the emergency command center for police dispatch calls. Here, dispatcher Joe Wilk answers a 911 call from Great Barrington. Sat August 27, 2011 (ZOLLSHAN) 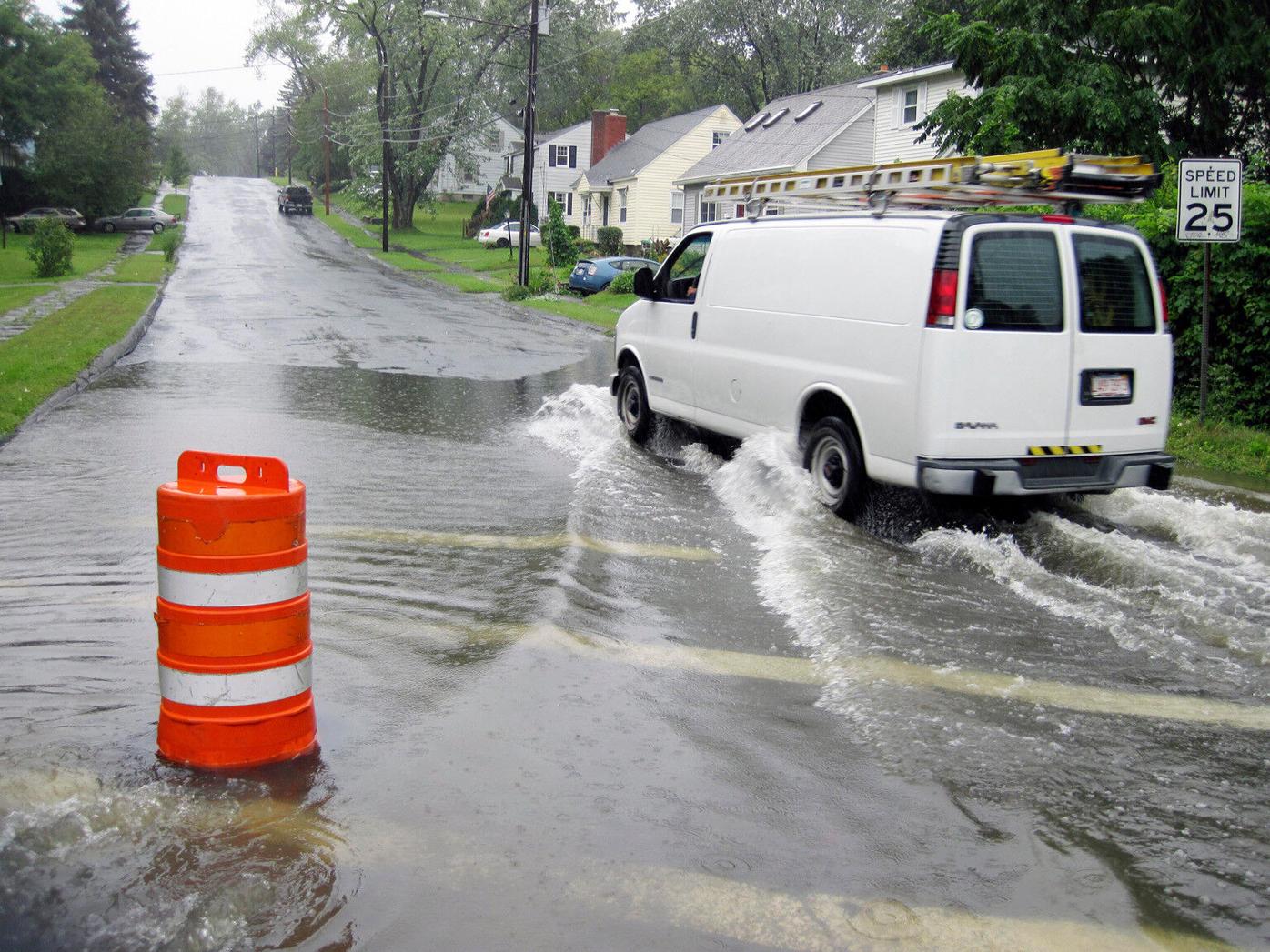 On the corner of Adelaide Street and Elm Street in Pittsfield, water bubbles up from a storm drain, flooding the street during the tropical storm Irene. Sun August 28, 2011 (ZOLLSHAN)

In the event of power outages in police stations in Berkshire County due to Hurricane Irene, the Berkshire County Sherriff's Communication Center in Pittsfield will act as the emergency command center for police dispatch calls. Here, dispatcher Joe Wilk answers a 911 call from Great Barrington. Sat August 27, 2011 (ZOLLSHAN)

On the corner of Adelaide Street and Elm Street in Pittsfield, water bubbles up from a storm drain, flooding the street during the tropical storm Irene. Sun August 28, 2011 (ZOLLSHAN)

Maybe a nearby road is still closed. Tax bills for some have crept up. The least fortunate had their homes compromised or totally destroyed.

"It's funny because it was one of the first things I said to my wife today: ‘Do you realize two years ago today we got flooded out?'" Smith said in an interview with The Eagle.

Smith, an avid biker, said he planned to ride down to the park from his new home in North Adams that evening to commemorate the storm, which local meteorologist John Hockridge named as a "top five" event in the 40 years he's kept records.

Total rainfall ranged between 4 and 9 inches in Northern Berkshire cities and towns.

"It surprised everybody, I think," Hockridge said Wednesday. "The amount of rain that fell in such a short period was very rare, and the damage it caused was nearly unprecedented."

In the end, Smith and 152 others who lived in the Spruces -- including his sister Patricia -- lost their homes.

"They'd become mud holes in a few hours," Smith said. "We were told we could never ever go back."

Peter Fohlin, Williamstown town manager, said in an email Wednesday, "For most people Irene was over in 24 hours. The stress and struggle of Spruces residents continues after 24 months."

As of Wednesday, 66 homes inside the park have been reoccupied. The town and a nonprofit formed after the storm continue efforts to rehouse former residents and others displaced by the storm elsewhere in town.

"I had imagined I would live there until I died," Smith said.

Instead, he found himself trying to get financed by a local bank to purchase a new home on Union Street in North Adams. He lives there presently with his sister and wife, Mary.

All North County municipalities reported moderate to severe damage, and some would spend the better part of the next two years rebuilding. Adams was one of those.

"Multiple neighborhoods were impacted by storm damage and the town spent nearly 18 months overseeing an estimated $2 million plus worth of recovery projects," Town Administrator Jonathan Butler wrote in an email Wednesday.

Among the most costly and vexing of them: A culvert failure on heavily traveled East Road, which left a gaping hole where a large section of the road had been. The road reopened in early 2012.

Since Irene, Butler said the town has beefed up its infrastructure and improved on emergency response protocol he said he feels already rose to the occasion during the storm.

He said the storm raised consciousness in Town Hall. Adams and North Adams adopted CodeRED, a phone and computer emergency notification system for all residents, since Irene, and have found new opportunities to use it, particularly during Hurricane Sandy.

Savoy, which saw just over 9 inches of rain during Irene, the highest total rainfall of all the towns in North County, remains touched by the storm as well. Black Brook Road, the route connecting the town to Florida to the north, has not yet reopened. According to a 2009 Berkshire Regional Planning Commission study, the road saw traffic of more than 80 cars per day.

Select Board Chairman John Tynan had positive news to report about potential repairs to the road Wednesday. He said engineer's designs for its rebuilding near completion, and that the estimated $4 million project may receive full funding from outside the town.

The Federal Emergency Management Agency had earlier vowed to cover 75 percent of the repairs, but Tynan said the remaining 25 percent sneaked its way into Gov. Deval Patrick's $19 billion transportation bond bill this year.

"[Residents] want it open and they'd like to see some action," Tynan said Wednesday. "So [The Board of Selectmen] talked [at a meeting Tuesday] night about really focusing on it. We feel we've got much more of an opportunity now."

Tynan said if the project isn't ready for work to begin by fall, it will "definitely be ready by spring."

Other Northern Berkshire projects necessitated by the storm -- the rebuilding of East Road Bridge in Clarksburg, numerous projects in North Adams -- also ran into the hundreds of thousands of dollars.

One thing reported by officials The Eagle spoke to on Wednesday's anniversary was consistant: Local first responders and highway crews rose to the occasion.

"To a person, they were heroic," Fohlin said.

All also hoped the the performance could be duplicated if a storm of similar magnitude occurred.

"The overarching takeaway -- you need good people who are well-trained at every level," Fohlin added. "A ‘hundred year' event can occur any given day."

Spurred by the storm

The effects of Tropical Storm Irene led to the creation of several projects and initiatives relating to the storm in the Berkshires region, including:

• A segment in the Mohawk Trail documentary film, "Tales from the Trail," created by a sixth-grade class from Gabriel Abbott Memorial School in Florida: http://bit.ly/M0TuE6

• "Good Night Irene," by Craig Brandon, Mike Ryan and Nicole Garman (Surry Cottage Books), chronicles more than two dozen communities in the Catskills, the Berkshires and the Green Mountains to tell the story of those affected by the 2011 storm.

• Higher Ground in Williamstown was formed in September 2011 as a part of the community response to the devastation wrought by Tropical Storm Irene, whose flood waters destroyed 150 homes and left more than 200 people homeless. Information is available through the Higher Ground office at (413) 458-5714 or via email at HGWilliamstown@gmail.com.

Photos: A look back at Tropical Storm Irene's impact on the Berkshires in 2011

It was the last weekend of August 2011, and frequent rains had already saturated the soil; rivers and streams were running fast and high in th…