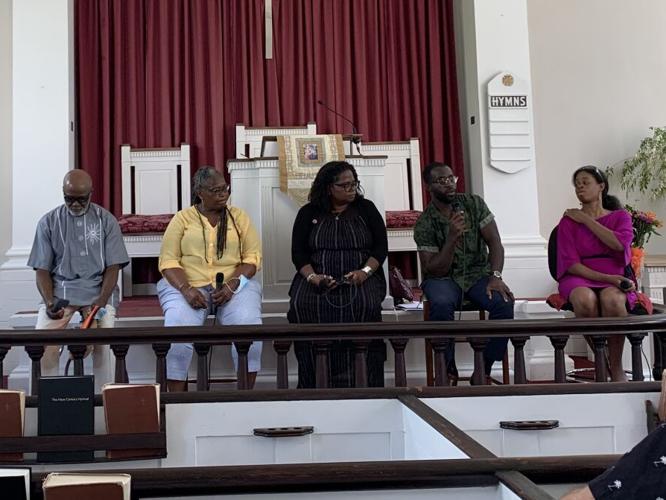 From left, Dennis Powell, Shirley Edgerton, Gwendolyn VanSant, A.J. Enchill and Leticia Haynes discuss the importance of voting rights during a "Protecting the Vote" discussion at the Tyringham Union Church. 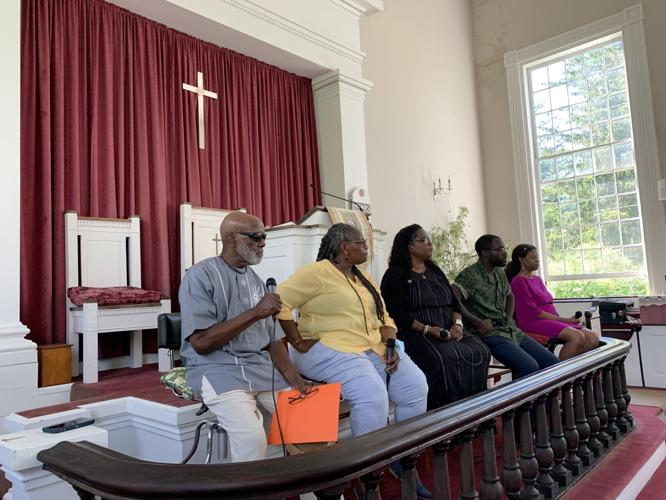 TYRINGHAM — Protecting the vote of Black citizens involves a lot more than ensuring their ballots are counted.

“Politics begins at the local level. Become part of that community, become active, use your voice." Dennis Powell, president of the NAACP Berkshire Branch

It involves deeper work by entire communities to encourage people of color to vote by showing them that their opinion matters, that they are counted as people, that they have a stake — and that even subtle barriers to their running for office are removed, said panelists at a “Protecting the Vote” discussion at the Tyringham Union Church Saturday.

It’s very local. It involves learning. And this has to start early.

“Young people, they need to understand the local system,” said prominent Berkshires activist and educator Shirley Edgerton, noting the way some things are funded in Pittsfield, while others are not.

Without it, politicians can take advantage of Black communities, and she thinks that’s already happening as Democrats take for granted their Black voter base. Rhetoric over action seems to be winning right now, she said.

“I don’t want anyone to take my vote for granted,” Edgerton said. “It’s dangerous.”

Tyringham for Racial Justice and the Hop Brook Community Club hosted the event in honor of Juneteenth, and encouraged donations to three groups most of the panelists represent: NAACP, Berkshire Branch; Multicultural BRIDGE and Berkshire Black Economic Council.

Held the day after the Supreme Court announced it had overturned Roe v. Wade, and days after gun carrying laws were loosened in New York state, the panelists had plenty of fodder to emphasize that a grasp of civics and an empowered American Black citizenry is critical for the sake of everyone.

There's been momentum for this in the last two years, but historically it tends to slip back into “white dominance,” said Gwendolyn VanSant, CEO and president of BRIDGE.

“I implore us all to remain eyes wide open,” she said. “So easily we can repeat the oppressive behaviors of our predecessors giving and taking back.”

It is ploys like the misuse of the Juneteenth holiday for enrichment, Powell said, that reinforce how important it is for young people to learn how the system is stacked and how to keep elected officials accountable — right here in the Berkshires.

“Politics begins at the local level,” he said. “Become part of that community, become active, use your voice — as the great John Lewis said, ‘Get in trouble, make good trouble,’ because that’s how change comes about.”

Protesters in Pittsfield call out efforts to restrict voting, support federal effort to open access for all

Diversity, Equity and Inclusion work in various institutions is another force that helps with all this.

“You have to treat it as a hardcore subject,” said A.J. Enchill, executive director of the Berkshire Black Economic Council, and former legislative aide to state Sen. Adam Hinds D-Pittsfield. “It can't be an elective. It can't be the first thing that goes when there need to be budget cuts.”

Leticia Haynes knows a thing or two about this. Haynes is vice president of Institutional Diversity, Equity and Inclusion at Williams College.

She said to beware; these roles can be misused “to suit their own needs or to fill a void that they think they have to do.

“DEI is whatever you want it to be on any given day,” Haynes said.

Back to voting, Haynes said to watch out for malfeasance like prison gerrymandering, using Pennsylvania as an example.

One member of the audience asked what they could do about those in Great Barrington’s Black community who weren’t voting, per word-of-mouth. This annoyed the panel.

“If you don’t feel valued, why participate?” Edgerton said.

Powell said that even he, with his “thick skin,” was rattled by his experience both running for and while on the School Committee for Pittsfield Schools. Subtle racism was at play, he suggested.

Edgerton is working to change all this. An action taken by two Pittsfield city councilors this month that resulted in a budget by default “disturbed” and lit yet another fire for some of her work through the NAACP.

She let everyone in on the plan.

“We’re bringing folks in from the Boston area, and they’re going to train our young women and young men to prepare to run for office,” she said to a round of applause.