NORTH ADAMS — Just weeks after moving to unionize, about 100 workers at the Massachusetts Museum of Contemporary Art soon will cast ballots in what is shaping up as an exercise in workplace democracy embraced by employees as well as management.

The National Labor Relations Board posted Tuesday that parties have reached an agreement about the voting process. It calls for ballots to be provided April 6, with a count of mailed-in ballots scheduled for 1 p.m. April 28.

“The pandemic highlighted all the precariousness of these jobs and the lack of accountability of museum staff over their conditions of employment,”

— Maida Rosenstein, president of UAW Local 2110, the union that seeks to represent workers at the Massachusetts Museum of Contemporary Art in North Adams

Both the union involved and the museum are sounding notes of conciliation. After initially saying it respected its employees’ “legal right to organize,” the museum now displays on its website a pledge that it “will not oppose or in any way interfere with efforts to organize.” 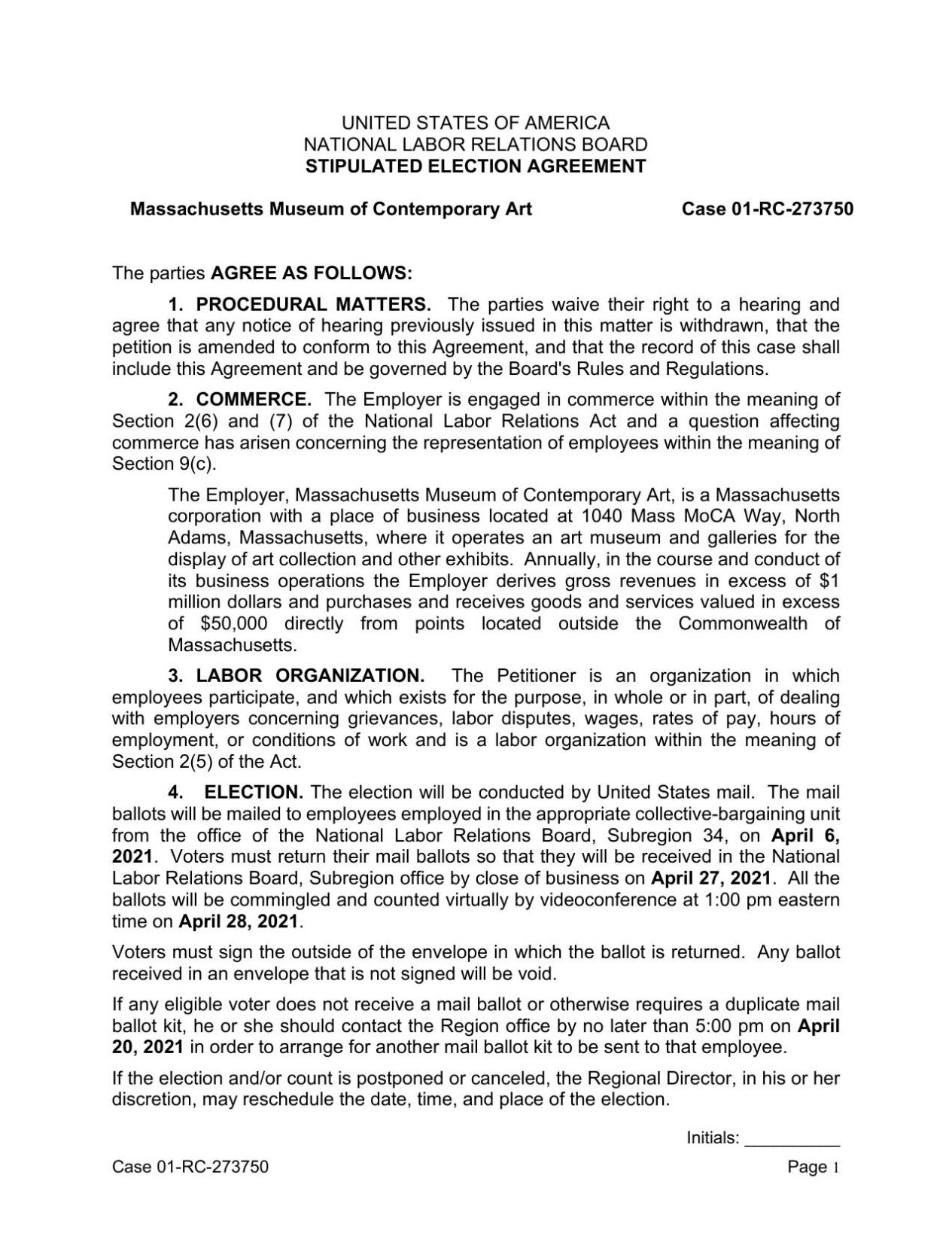 Mass MoCA workers filed a petition March 8 with the NLRB seeking a vote on forming a collective bargaining unit that would include curators, educators, art fabricators and others.

The museum workers would affiliate with UAW Local 2110, which led a successful drive last fall to organize employees of the Museum of Fine Arts in Boston, one of the largest art museums in the world. The vote to unionize at the MFA passed overwhelmingly, 133-14.

The Mass MoCA balloting will run for three weeks, with results available after the ballots — provided with self-addressed, stamped envelopes — are returned to the NLRB and tabulated during the April 28 videoconference with all parties.

Maida Rosenstein, the local’s president, said the museum’s leaders have shown an interest in allowing employees to decide on their own whether to unionize. “They in general have been cooperative around the election,” Rosenstein said in an interview Tuesday. “They’ve refrained from any negative campaigning. It means we will have good labor relations with them and work through things as amicably as possible.”

“We genuinely want to make every good faith effort to do the right thing for our employees.”

The union represents technical, office and professional workers in a range of workplaces, including the Museum of Modern Art in New York City.

Tracy Moore, Mass MoCA’s interim director, said she was encouraged after meeting with representatives of the union.

“We genuinely want to make every good faith effort to do the right thing for our employees,” Moore said in a statement provided to The Eagle. “We will continue to provide basic information to staff about how the election process works and encourage them to vote, without attempting to influence anyone’s choice.”

If workers elect to unionize, the museum said in a March 17 statement, it would seek to reach a contract with the bargaining unit that is beneficial to workers and the institution.

“Should Mass MoCA’s employees vote to certify UAW as their union, we have every reason to anticipate excellent labor-management relations,” the statement said, “and we will work toward the negotiation of a collective bargaining agreement that is in the shared interest of the institution, our valued staff, and other dedicated stakeholders.”

When workers announced March 8 that they filed for union representation, they cited low salaries, questions about job security after pandemic layoffs and what they termed “inequitable conditions.”

But, in the weeks since, the rhetoric appears to have warmed. In its March 17 statement, the museum all but embraced the union campaign, saying, “Mass MoCA’s employees are the heart and soul of our institution, and they have the right to choose whether to unionize or not through a democratic process.”

“Regardless of the outcome of the election, we are committed to ensuring a culture of transparency and accountability and will continue our work together toward an inclusive, equitable, and sustainable future for Mass MoCA and the city of North Adams,” the statement said.

Amanda Tobin, the museum’s associate director of education, said in an interview that the institution’s decision not to oppose the campaign is positive.

“We’re gratified that Mass MoCA has agreed to be neutral in this process,” she said Tuesday.

Tobin said proponents of the drive are working to spread their message. The campaign began last summer, after the museum laid off 75 percent of its staff. Before that, she said, people occasionally discussed a union drive but were fearful that it could cost them their jobs.

And then the pandemic took those jobs for a spell, she said.

“It was the last straw that broke the camel’s back,” Tobin said. “It created a whole lot of urgency for people.”

Before petitioning for a vote, Tobin notes, the union wanted evidence that a super-majority of employees was behind the drive. Tobin notes that as a progressive cultural organization, Mass MoCA’s leadership could have a hard time opposing a matter of workplace democracy. A current exhibition featuring work by artist Glenn Kaino celebrates social protest and collective action.

“We can’t espouse that if we don’t practice it at home,” Tobin said.

Rosenstein, the local’s president, said that issues flagged by Mass MoCA workers have come up at many workplaces that have sought collective bargaining. The COVID-19 crisis accelerated action, she said.

“The pandemic highlighted all the precariousness of these jobs and the lack of accountability of museum staff over their conditions of employment,” Rosenstein said. “A lot of money has flowed to the top echelon in museums … but at the same time, museums rely on poorly paid employees. Many people are making minimum wage or close to minimum wage with no benefits,” she said of workplaces in general. “These issues were driving things anyway.”

That said, cultural workers also tend to feel loyalty to the mission, she said.

“There still is a very strong commitment to the museum itself, and to see the institution be inclusive and a collaborative workplace,” Rosenstein said of Mass MoCA workers. “It’s very possible for an institution like Mass MOCA to end up with cooperative and collaborative labor relations.”

From the outset, museum workers involved in the organizing drive have spoken of mutual interests with their employer.

Maro Elliott, the museum’s manager of institutional giving, said in a statement this month that Mass MoCA is a vital local institution that benefits North Adams and “the creative community more broadly.”

The museum’s staff is key to that, Elliott said. On Instagram, she is pictured holding a sign that reads, “Our value — and values — as staff will be better recognized through an organized and collective voice.”