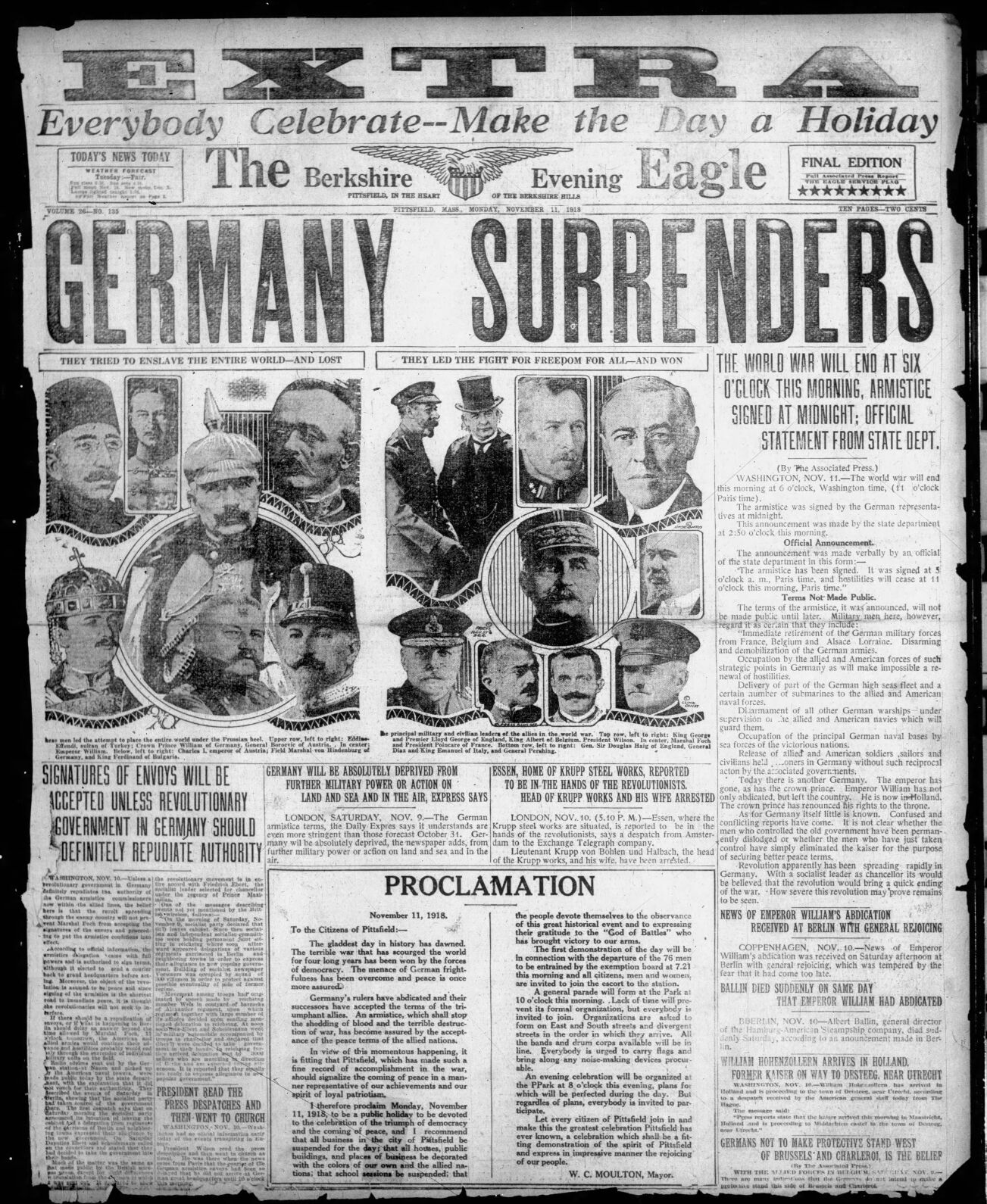 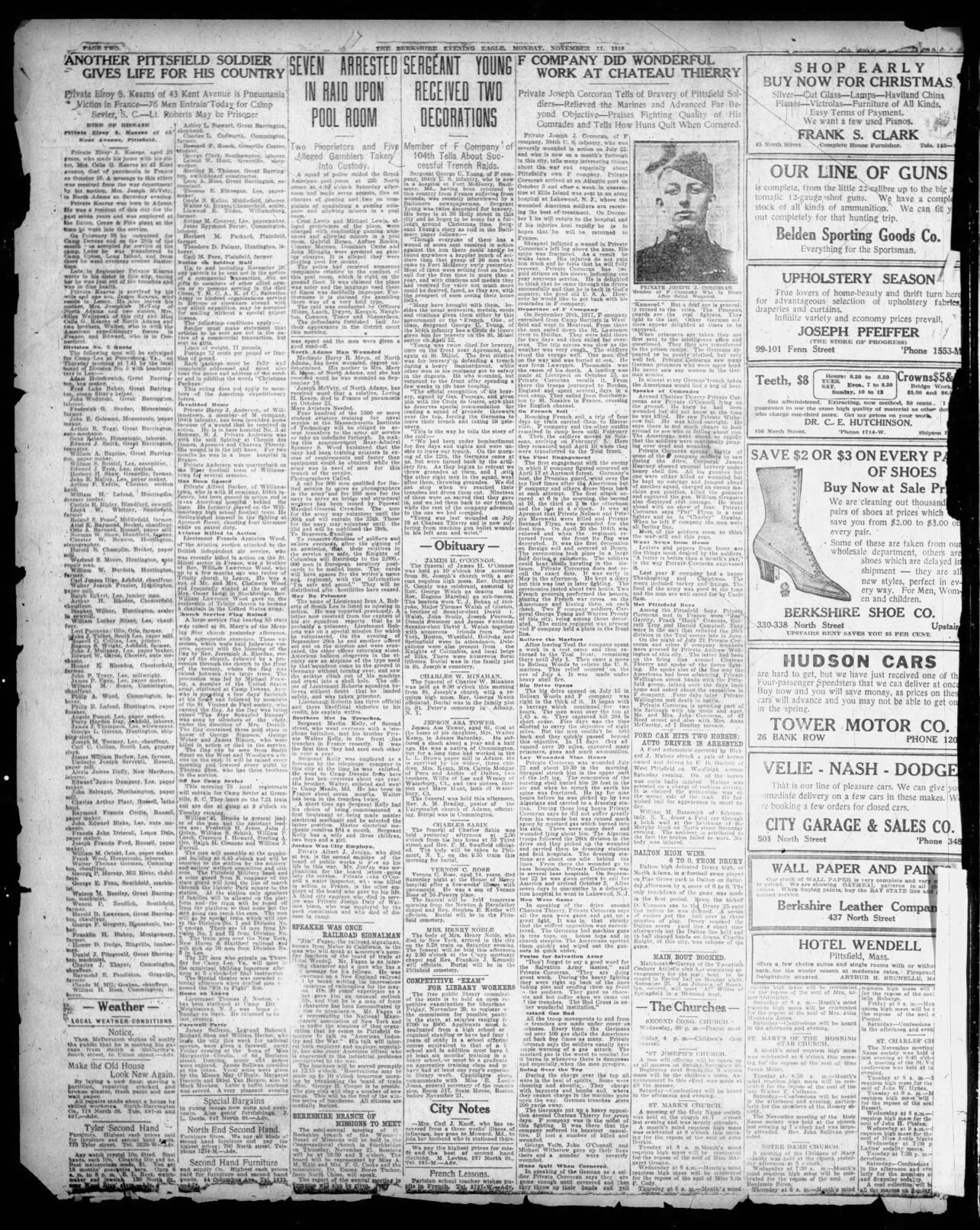 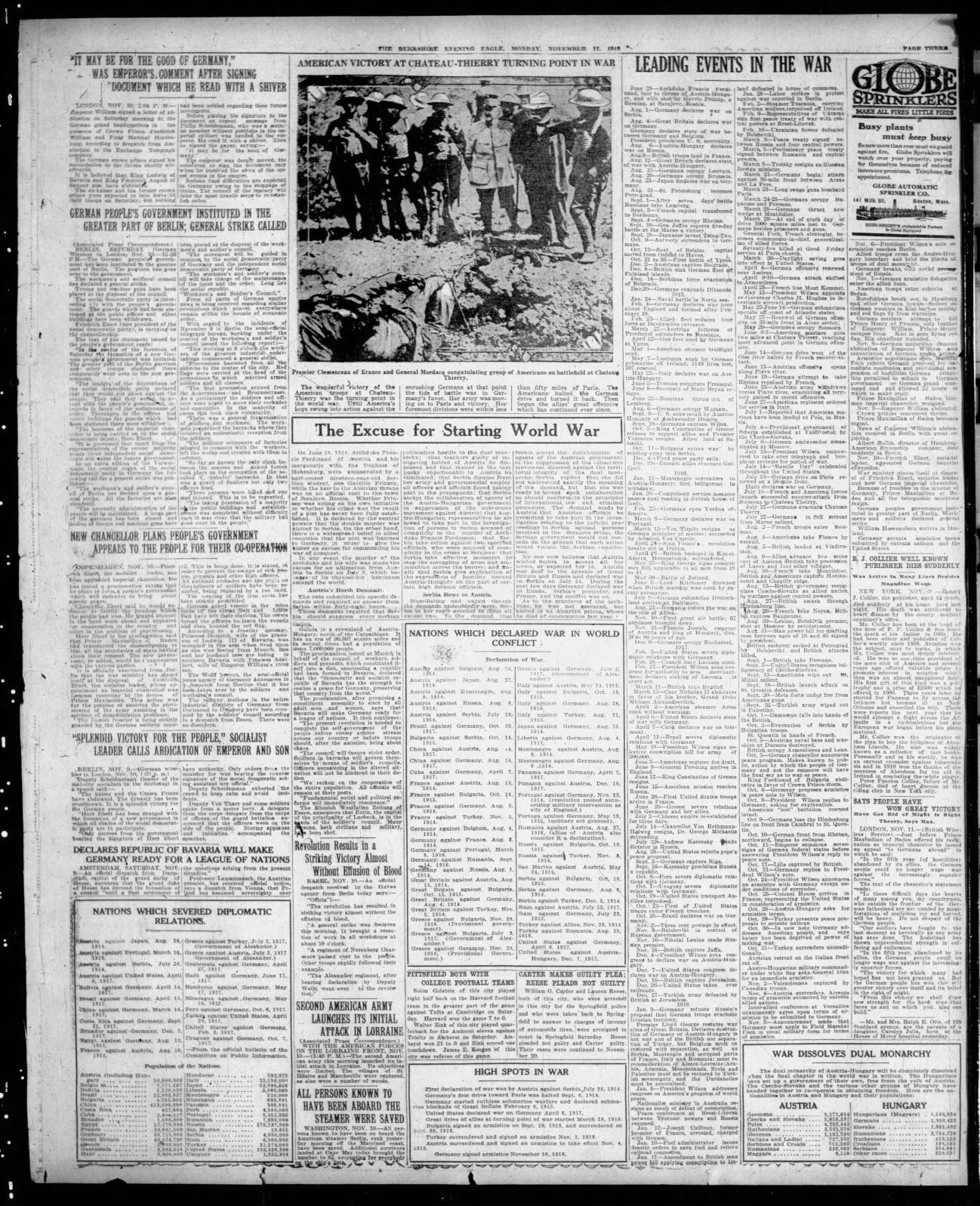 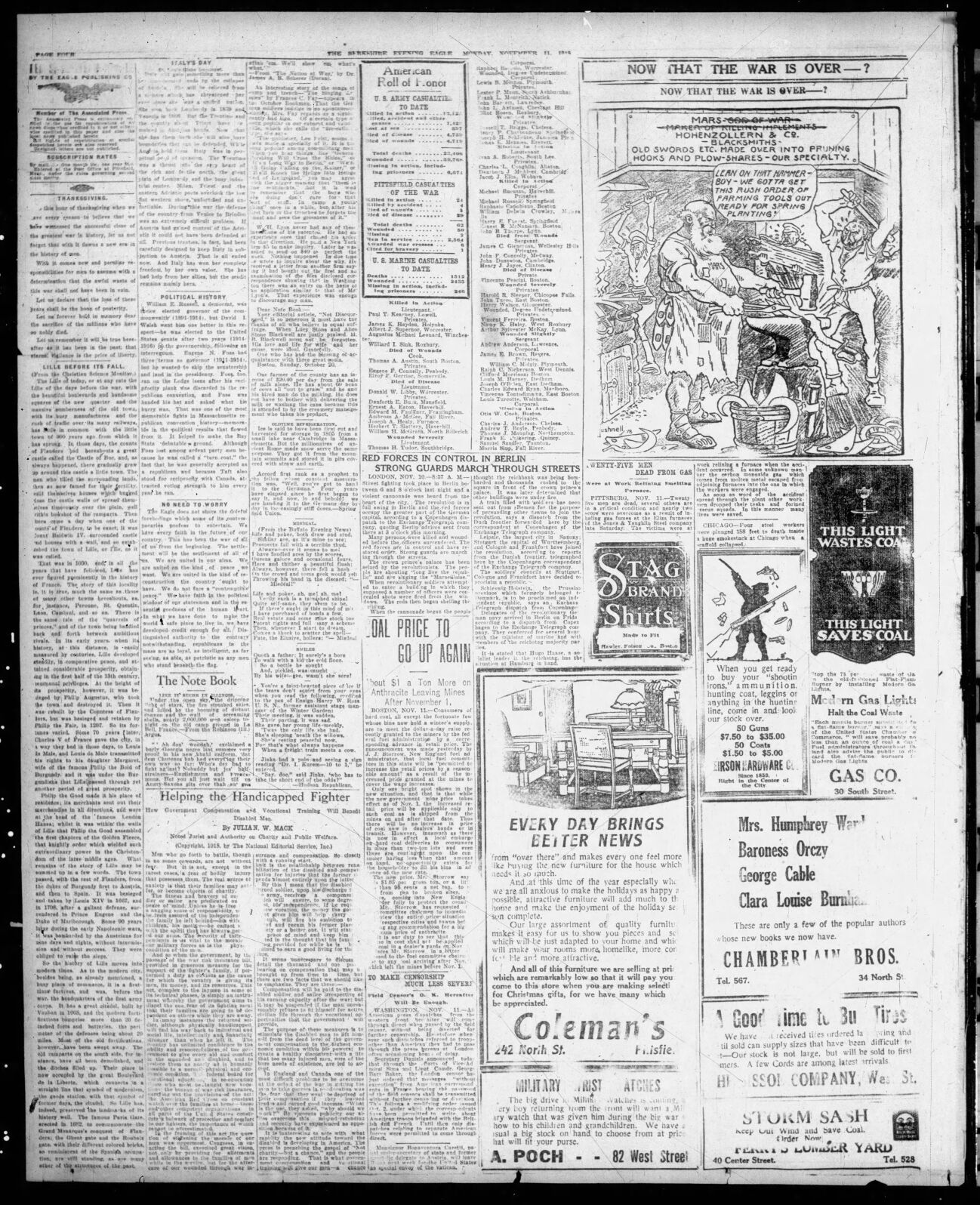 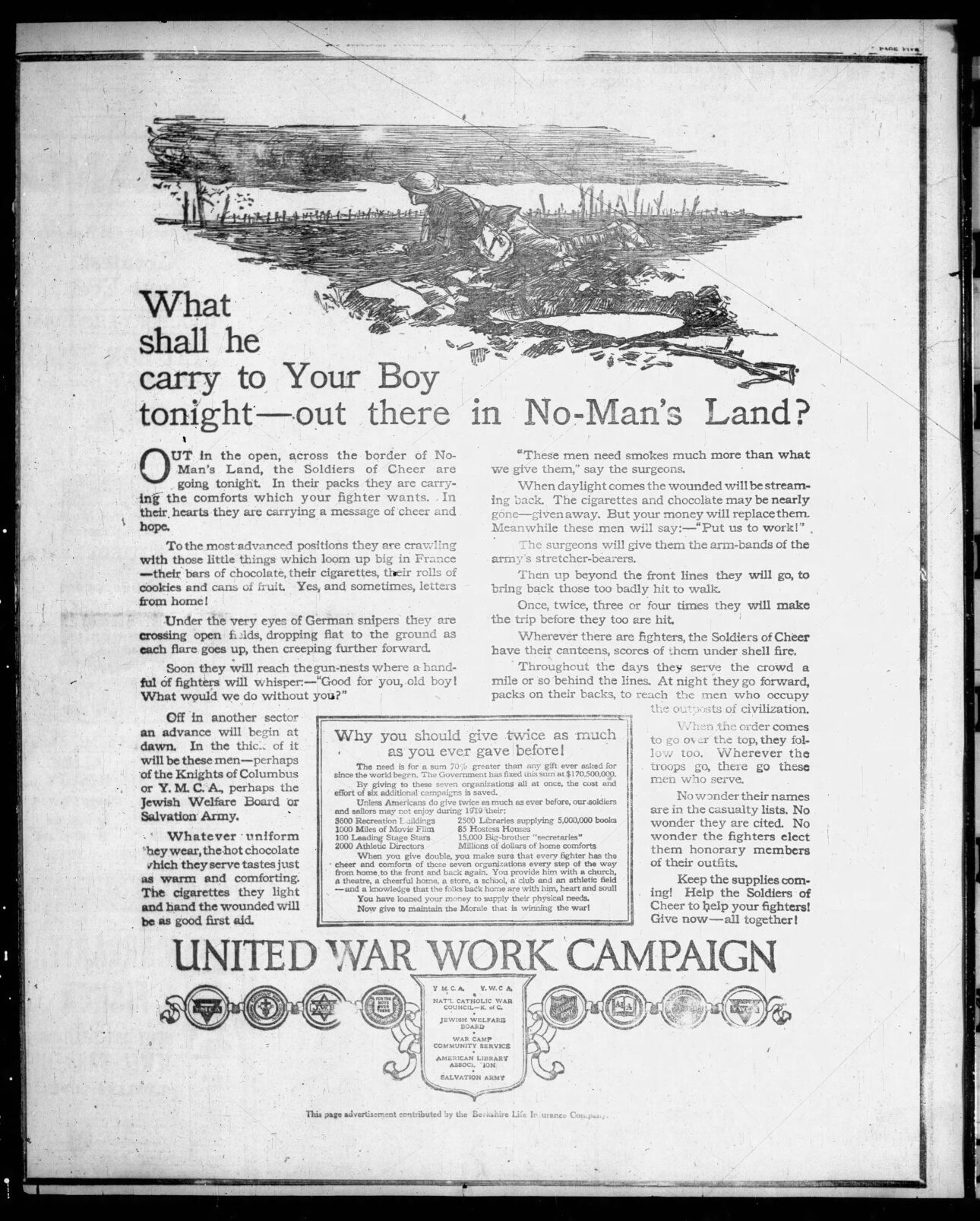 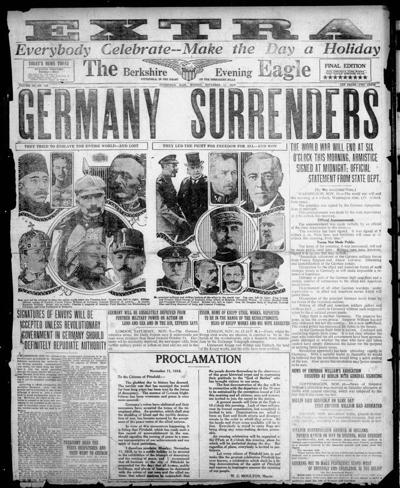 The Nov. 11, 1918, Berkshire Eagle proclaimed, "GERMANY SURRENDERS," signaling to the residents of the Berkshires that the armistice had been signed and World War I had ended. Under the label, "THEY TRIED TO ENSLAVE THE ENTIRE WORLD — AND LOST," The Eagle's editors showed the vanquished. On the right, the victors — President Woodrow Wilson, King George of England, French President Raymond Poincare, among them — were shown under the heading, "THEY LED THE FIGHT FOR FREEDOM FOR ALL — AND WON."

The annual Veterans Day holiday is marked Thursday. There were 17.4 million military veterans living in the United States as of 2019, according to the Census Bureau, of whom 8.4 percent were younger than 35. Of the oldest generation of wartime veterans, those who served in World War II, the VA estimates that about 226,700 are living as of 2021, projecting the number to drop to about 42,000 by 2026, and about 4,800 by 2031.

Veterans Day falls on Nov. 11, the anniversary of the end of hostilities in the first world war. It was 103 years ago Thursday that the armistice between the Allies and Germany took effect at 6 a.m. Boston time — or, in Paris, the 11th hour of the 11th day of the 11th month — drawing to a close one of the most brutal conflicts the world has seen.

At the time, The Berkshire Eagle, then known as The Berkshire Evening Eagle, was published and distributed during the afternoon. But, this newspaper was an "EXTRA," which signaled a special publication that day. Likely, Eagle editors were up very early that morning to assemble the latest news from across the globe and here at home and get that news on the press and out to the people. The Eagle likely hit the streets extra early that day because it carries word of a hastily assembled parade at 10 a.m. that day.

The cheerful news that the war had ended had The Eagle editors in a celebratory mood. Notice at the top of the page it says, "Everybody Celebrate — Make the Day a Holiday."

And Pittsfield immediately was ready to celebrate. At the bottom of the page, the Pittsfield mayor at the time, W.C. Moulton, wrote a proclamation that gave thanks and blessings to all that the war had ended. But, it was clear, it was time to party.

The mayor canceled school and told businesses to shut down for the day so that people could "devote themselves to the observance of this great historical event and to expressing their gratitude to the "God of Battles" who has brought victory to our arms." After the parade, the mayor called for an evening celebration at Park Square, too.

"Let every citizen of Pittsfield join in and make this the greatest celebration Pittsfield has ever known, a celebration which shall be a fitting demonstration of the spirit of Pittsfield and express in impressive manner the rejoicing of our people," Mayor Moulton wrote.

Here is the proclamation:

To the Citizens of Pittsfield:

The gladdest day in history has dawned. The terrible war that has scourged the world for four long years has been won by the forces of democracy. The menace of German fright-fulness has been overcome and peace is once more assured.

Germany's rulers have abdicated and their successors have accepted the terms of the triumphant allies. An armistice, which shall stop the shedding of blood and the terrible destruction of war, has become assured by the acceptance of the peace terms of the allied nations.

In view of this momentous happening, it is fitting that Pittsfield, which has made such a fine record of accomplishment in the war, should signalize the coming of peace in a manner representative of our achievements and our of loyal patriotism.

I therefore proclaim Monday, November 11, 1918, to be a public holiday to be devoted to the celebration of the triumph of democracy and the coming of peace, and I recommend that all business in the city of Pittsfield be suspended for the day; that all houses, public buildings, and places of business be decorated with the colors of our own and the allied nations; that school sessions be suspended; that the people devote themselves to the observance of this great historical event and to expressing their gratitude to the "God of Battles" who has brought victory to our arms.

The first demonstration of the day will be in connection with the departure of the 76 men to be entrained by the exemption board at 7.21 this morning and all citizens, men and women, are invited to join the escort to the station. A general parade will form at the Park at 10 o'clock this morning. Lack of time will prevent its formal organization, but everybody is invited to join. Organizations are asked to form on East and South streets and divergent streets in the order in which they arrive. All the bands and drum corps available will be in line. Everybody is urged to carry flags and bring along any noise-making devices procurable.

An evening celebration will be organized at the Park at 8 o'clock this evening, plans for which will be perfected during the day. But regardless of plans, everybody is invited to participate.

Let every citizen of Pittsfield join in and make this the greatest celebration Pittsfield has ever known, a celebration which shall be a fitting demonstration of the spirit of Pittsfield and express in impressive manner the rejoicing of our people.