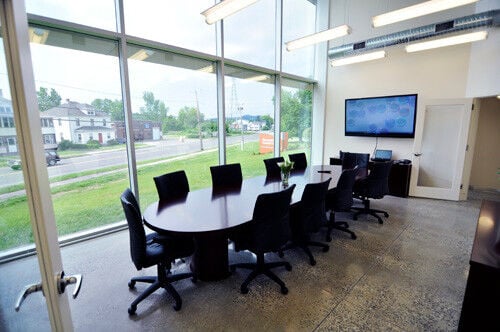 The MountainOne Financial Center at the William Stanley Business Park was built with the latest green building techniques. It has state-of-the-art 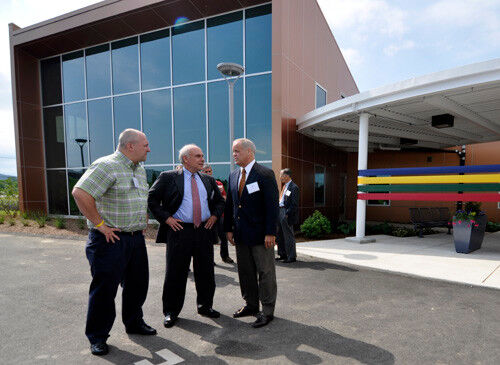 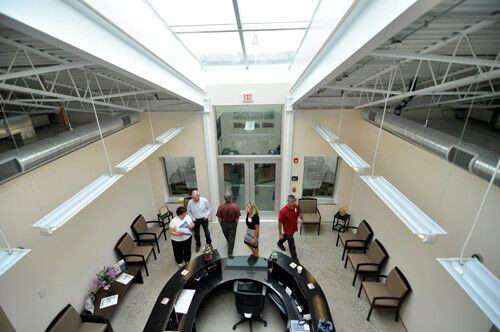 The MountainOne Financial Center at the William Stanley Business Park was built with the latest green building techniques. It has state-of-the-art

PITTSFIELD -- MountainOne Financial Partners formed 10 years ago, but it's the mutual holding company's partner organizations that have been more recognizable to the public, according to president and CEO Steve Crowe.

That's beginning to change, Crowe said on Monday, and the reason is sitting at the corner of East Street and Silver Lake Boulevard.

"Since construction began last year on this project, we've been the talk of the city," Crowe said, as MountainOne officially dedicated its new $2 million financial center at the William Stanley Business Park of the Berkshires on Monday.

"We've created a buzz about this site," he said. "I think now in this city, MountainOne is known, and it's because of this beautiful new building."

The traditional ribbon-cutting ceremony included four ribbons instead of the customary one.

Founded in 2002, North Adams-based MountainOne has assets of $800 million and 225 employees at 14 locations in Massachusetts and Ver mont. The new financial center houses 25 employees.

In Pittsfield, MountainOne had previously operated out of small offices on North Street.

"Due to growth, we've moved here," Crowe said, "and we're celebrating that today."

The structure is the first occupied building at the Stanley Business Park since the Pittsfield Economic Develop ment Authority was formed to develop the 52-acre parcel that formerly housed General Electric's power transformer facility 14 years ago. PEDA didn't receive the first parcel of land from GE until 2005, and didn't retain control of the entire parcel until February.

Several speakers cited current and former PEDA board members, including former Mayor James M. Ruberto, for the role they played in the project. The building's developer, Eric Taylor of Pittsfield Stanley Works, is related to the park's namesake, William Stanley, who developed the modern transformer.

The project came together quickly. MountainOne an nounced plans to move to the Stanley Business Park last April, and the official groundbreaking ceremony took place in August. Construction was officially completed on March 30.

"When I look at this building, it's strictly modern, and I think that's appropriate," said Mayor Daniel L. Bianchi. "It sits on the corner of the William Stanley Business Park where we are anticipating great things to happen in the years to come."

The new financial center is 26 feet high at its highest point, and contains 42.4 tons of structural steel. It was constructed under green building techniques -- all of the concrete used in the foundation and building contains a high percentage of recycled materials. All the steel building beams are made of recycled steel, and the aluminum used in the windows is also recycled.

The building has a state-of-the-art heating and cooling system, and a metal roof that will not require replacement. According to Taylor, 40 percent of the building's exterior is made of glass. He said it took 22,000 hours of labor to complete the project.

"Now that MountainOne has added some color" to the business park, Taylor said, "I encourage others to add more."