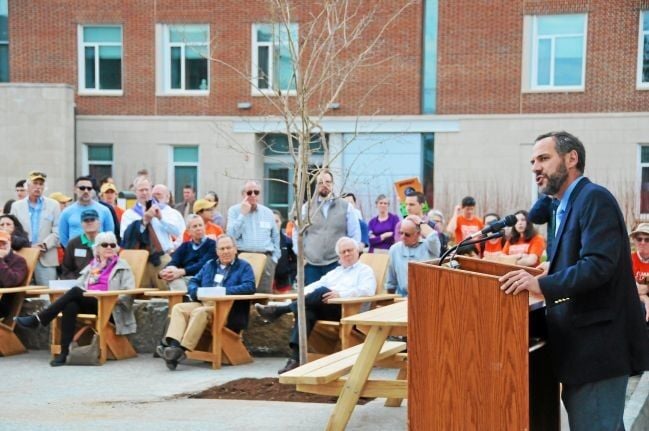 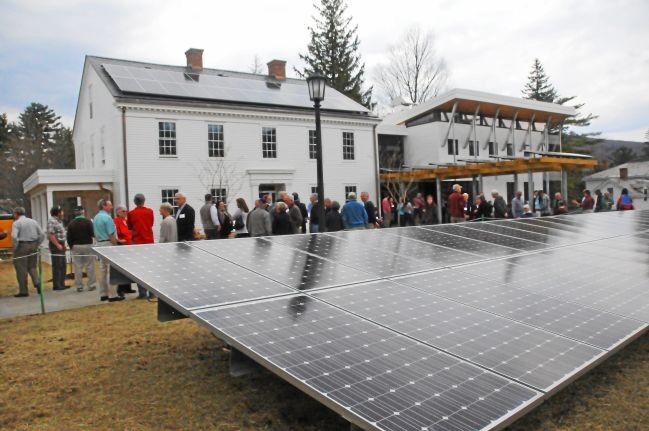 Williams College officials, students and alumni gather Saturday for the dedication of the Class of '66 Environmental Center, an experimental structure that aims to have zero net use of electricity and little environmental impact.

Williams College officials, students and alumni gather Saturday for the dedication of the Class of '66 Environmental Center, an experimental structure that aims to have zero net use of electricity and little environmental impact.

WILLIAMSTOWN >> As the sun beat down on more than 50 newly installed solar panels, Williams College administrators, faculty members, alumni and students gathered to dedicate a newly completed experimental building designed to be completely sustainable in both the use of electricity and water.

At the same time, a couple of hundred students in orange T-shirts marched through campus calling for the college to divest its endowment fund from fossil fuel producing companies.

The roughly $5.2 million project, which was both a renovation of an historic structure and an expansion to include more space and a number elements to facilitate the sustainable nature of the building, took about five years from planning to completion.

Built in 1794, Kellogg House was the home of first Williams College President Ebenezer Fitch. Saturday, it was renamed the Class of '66 Environmental Center.

Ultimately, officials hope to get the building classified as a "Living Building," but only after a year of documented sustainability — meaning the building had net-zero use of electricity from the grid and that it uses only the water captured in the rainwater collection and reclamation system.

"The building is designed to promote engagement with the environment and sustainability in a very significant way," said Ralph Bradburd, chairman of the Center for Environmental Studies and professor of Political Economy, at the start of the dedication. "Finding a path to sustainability is the single greatest challenge of our generation."

In the midst of his remarks, Bradburd had to pause for a few moments as the chanting student divestment demonstrators marched up to the scene and gathered around the dedication assembly.

"What do we want?" they chanted as they arrived on the scene. "Divestment! When do we want it? Now!"

Once they all arrived on the scene, the chanting died down and Bradburd continued. He noted that among other things, the Environmental Center is a learning opportunity for students and faculty as they figure out how best to use the building in a way that enhances its sustainability.

"It is great preparation for them as leaders of their generation to meet this challenge," he said.

Williams College President Adam Falk addressed the crowd, and described the project as "bold, principled and unprecedented." He noted it could be the first historical renovation to qualify as a Living Building.

Through the use of the latest in insulation tactics, photovoltaic solar panels, composting toilets, and a complex rain water retention and water filtration system, the operation of the facility should not require water from the town supply, nor use of the town sewer system, and produce more power than it needs.

Any surplus power would feed into the public utility grid.

To qualify for the Living Building Challenge (LBC), in addition to net zero use of electricity and water, the design had to include environmental restoration of the project site to minimize its impact on the local habitat. The project also had to use materials that are nontoxic — both as part of the structure and in their manufacture — and procured from sources as close to the project as possible. There can be no incineration of any kind, so no fireplaces or pellet stoves.

The LBC standards are tough: In the U.S., only four buildings have been awarded the LBC certification, and more than 50 are seeking it.

Even after completion, the occupants of the building will play a role in the certification. They are the ones who will have to be meticulous about conserving water and power by shutting down equipment or lighting and conserving water when they can.

The total structure is roughly 6,700 square feet. The solar panels — which have the capacity to generate about 56 kilowatt hours of electricity — will provide enough power to operate a forced-air heating, air conditioning and ventilation system. At least one window in every room has be operable to provide for natural cooling and air circulation in the warmer months.

Outside, to qualify as a Living Building, 37 percent of the site has to produce edible crops. Student were busy through out the day planting gardens of asparagus, rhubarb, goose berries, carrots and kale. Even the trees around the building will soon start bearing fruit. There will also be blueberry bushes.

According to Amy Johns, director of the Zilkha Center for Environmental Initiatives, the class of 1966 stepped up and provided a substantial amount of funding for the project.

"They basically made it happen," she said. "Without them, we would have had a much less sustainable building."

The students demonstrating for divestment, she noted, are part of the global effort to reduce the impact of climate change.

"They're thinking about the broader issue — what it takes to solve climate change," Johns said. "They understand that there are many aspects to the issue."

Once the dedication was finished and the sign was unveiled, demonstrators applauded energetically alongside faculty, staff, administrators and alumni.

Williams College pledges to 'phase out' investments in fossil fuels by 2033, something students have sought since 2013

In a letter to the Williams College community, President Maud Mandel announced that the school’s endowment investments in companies that produce fossil fuels will be completely phased out by 2033. Many students and faculty have been seeking the college’s divestment from fossil fuel firms since 2013.