WILLIAMSTOWN — The Williamstown sergeant who filed a federal civil lawsuit alleging bias and sexual harassment within the town’s Police Department has dropped the case, saying through his attorney that he now seeks to fix problems from within.

“As a result of many people asking difficult questions, and recent actions by the town and the Select Board, [Sgt. Scott McGowan] believes that Williamstown is committed to making the changes necessary to have a Police Department that is run in a way that everyone can be proud of.”

The development reframes an issue that, for four months, divided residents, brought a backlash from within the department and severely taxed those serving on the Select Board.

In early September, members of that top panel spoke movingly of the stress the suit and its allegations had put on the town, its residents — including those who expressed fear of mistreatment by local police — and on their own public service.

“I’m heartbroken that I live in a town where people don’t feel safe,” Jane Patton, the Select Board chairwoman, said at the time.

David A. Russcol, the Boston attorney representing Sgt. Scott McGowan, said it became clear that the legal action was impeding efforts to bring reforms to the department. With Johnson out, McGowan is ready to help the town move forward, Russcol said. 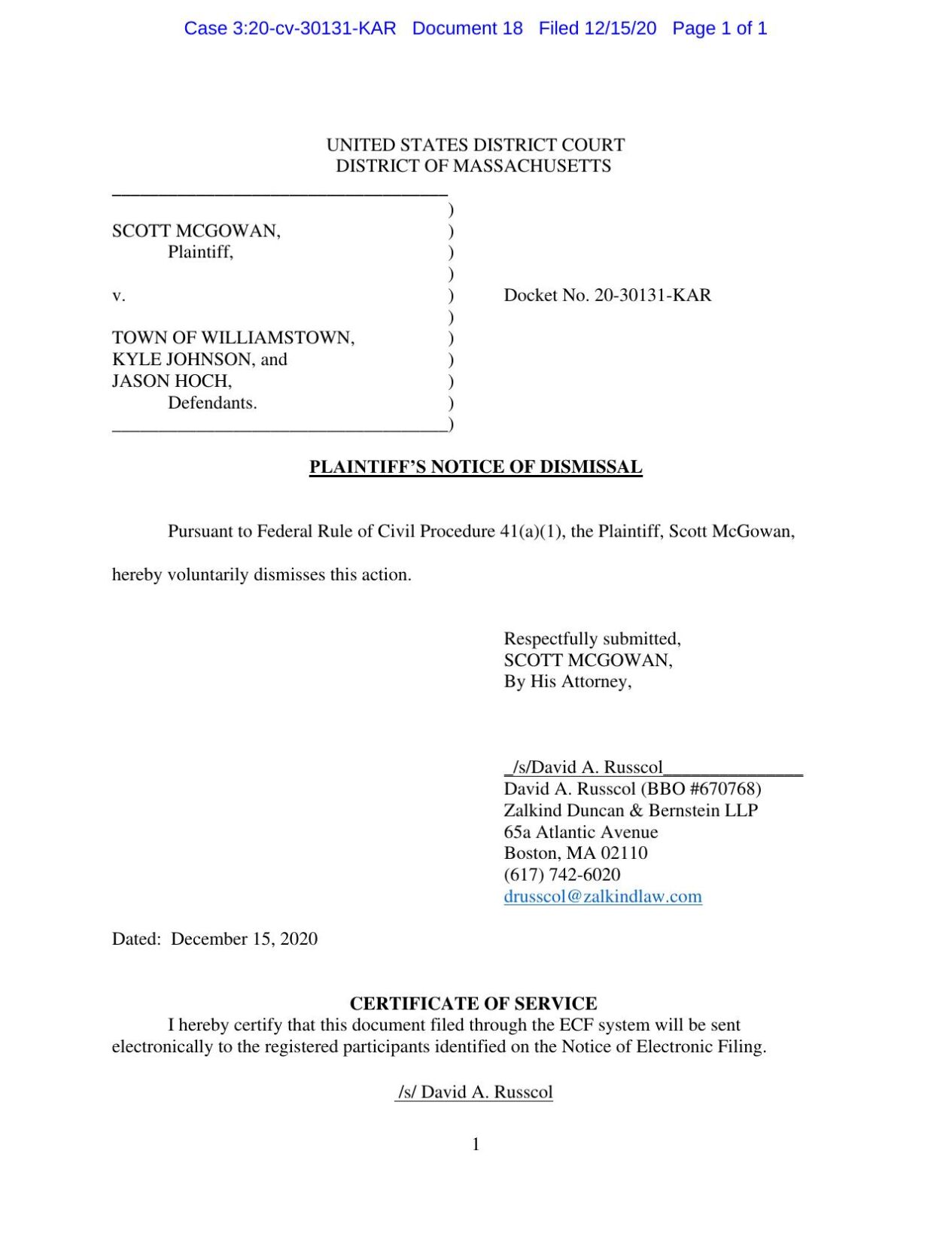 “Sgt. McGowan brought this case because he believed that the Williamstown Police Department was not serving the people of Williamstown or the people who worked at the Department in the way it should have,” Russcol said in prepared remarks shared with The Eagle.

The August suit alleged that Johnson had subjected McGowan, and others, to a hostile work environment and had engaged, more than a decade before, in unwanted sexual touching. Johnson had declined to comment on the substance of the allegations.

The suit also detailed instances of alleged racial bias by Johnson and others in the department, including use of an anti-Black epithet. McGowan’s court complaint claimed that he was singled out for retribution by Johnson and had been denied promotion to a new lieutenant’s position because he had been critical of the chief.

An earlier complaint by McGowan filed with the Massachusetts Commission Against Discrimination made nearly identical claims. The MCAD complaint was withdrawn in advance of the U.S. District Court complaint, as McGowan opted to take his case to a different legal arena.

Russcol said Wednesday that McGowan acted on his own and is not receiving a financial settlement from the town for withdrawing the suit. Nor has the sergeant gotten any other benefits or been promised any for taking the step, Russcol said.

Instead, “recent actions” by the town — no doubt including Johnson leaving — convinced his client to go in a different direction, Russcol said. “As a result of many people asking difficult questions, and recent actions by the town and the Select Board, he believes that Williamstown is committed to making the changes necessary to have a Police Department that is run in a way that everyone can be proud of.”

Russcol acknowledged that the lawsuit had become a barrier to reform within the department.

“At this point, for a number of reasons, the pending lawsuit was becoming an obstacle to change,” Russcol said.

For instance, though Patton had expressed support for an independent review of police operations, doing so would have compromised the town’s effort to defend Johnson and Jason Hoch, the town manager who was also a defendant.

That outside review never came. In the meantime, questions lingered about the professionalism of the local force — to the aggravation of people inside and outside the department. In October, feeling that the lawsuit had stirred up unwarranted animosity toward local police, members of the department wrote to the Select Board and to the Diversity, Inclusion and Racial Equity Committee to say the integrity and performance of officers unfairly has been questioned.

“Since the creation of the town-appointed DIRE committee many weeks ago, the environment of hostility in Williamstown toward our Police Department has worsened — with the department and its officers being the targets of unfair and false allegations,” the letter said. “This is an alarming trend that is not only damaging to Williamstown police officers and their families, but is simply not in the best interests of this community.”

With factors like that in mind, McGowan acted Tuesday to take the issue off the front burner, his attorney said, and to seek a common solution to remaining issues he raised.

“In order to allow the town to move forward in a positive direction, Sgt. McGowan is voluntarily dismissing the lawsuit,” Russcol said. “He looks forward to continuing his work for the Police Department and contributing as much as possible to the changes ahead.”

At a remote Select Board meeting Monday, Hoch announced that efforts to keep Johnson on board were untenable, despite what he described as Johnson’s good-faith efforts to account for past behavior. Johnson had been chief since 2004 and served on the force since 1992.

The chief had issued an apology to residents in early November.

“I will make it a priority to rebuild strained relationships, and build new relationships with individuals and the communities as a whole,” he said during a Nov. 9 Select Board meeting. “I am proud of my service in this community yet also deeply regret some past incidents that have caused me embarrassment and caused distrust among members of the community and beyond. ... I’ve let you down with some poor judgment early on in my tenure as chief by tolerating and participating in behaviors that never should have occurred in the workplace.”

On Monday, Hoch indicated that the chief’s efforts to overcome his past behavior were not going to clear the air.

“It became increasingly clear that, despite that commitment, the chief’s continued presence in the department would be an obstacle to genuinely engaging in a constructive healing process between the community and its Police Department,” Hoch said.