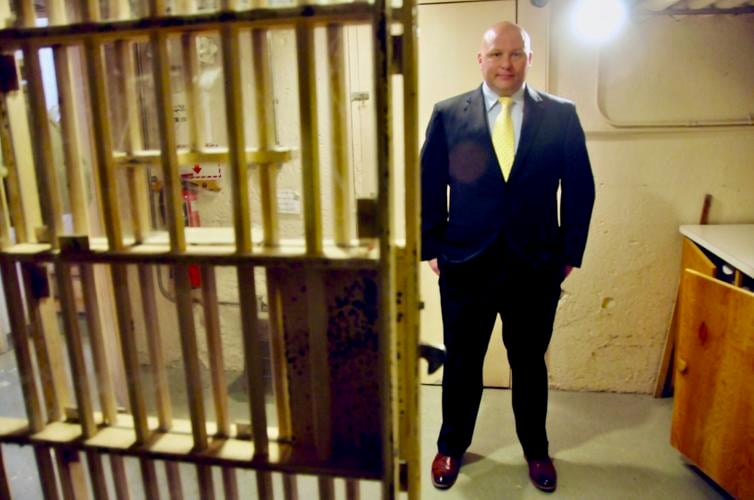 Williamstown Police Sgt. Scott E. McGowan is on paid leave after the filing of a complaint this month that says, among other things, that he falsified a police record in 2005 to conceal his involvement with an incident in which a Williams College student was pushed and spit at. 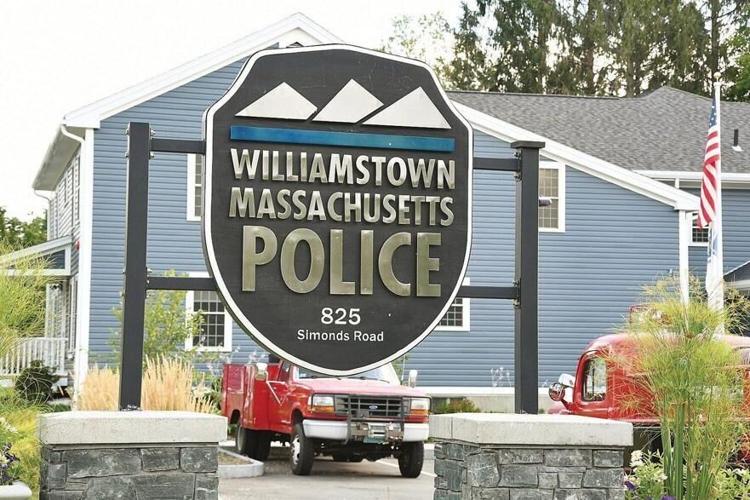 Former Williamstown Police Chief Kyle Johnson and former Sgt. Scott McGowan are reported to have contributed to the racially and sexually charged work environment in the department after two independent investigations. 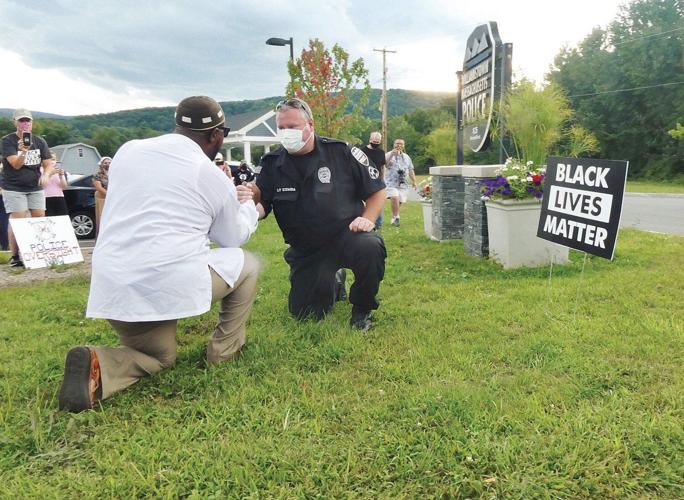 Bilal Ansari and Williamstown Police Lt. Michael Ziemba kneel together in August, after Ziemba placed a Black Lives Matter sign next to the police sign at the entrance to the police station's driveway. Ansari and others visited the police station in response to a lawsuit filed by Sgt. Scott E. McGowan alleging racial and sexual harassment within the department. The lawsuit was withdrawn in December.

WILLIAMSTOWN — A Williamstown sergeant altered a police record in 2005 in an apparent attempt to hide his role in an alleged assault on a Williams College student, according to interviews and documents obtained by The Eagle.

The 2005 incident involving Sgt. Scott E. McGowan is described in a complaint endorsed this month by all members of the Williamstown Police Department except McGowan and acting Chief Michael Ziemba. The complaint led Town Manager Jason Hoch to place McGowan on a paid administrative leave seven months after the sergeant’s civil lawsuit shattered public confidence in the town’s police force.

In a statement provided by his lawyer, McGowan denied that he falsified records and said he is eager to return to work.

In their complaint, the officers say that in April 2005, the department responded to a request for assistance from Williams College security after a student said a man driving on Lab Campus Drive had gotten out of his car, yelled at him, pushed him and spit in his face.

The student told campus security he was concerned that the man was intoxicated. The man was identified as the operator of the car.

“Later investigation revealed that Sgt. McGowan had come into the station and changed the plate numbers around in the call,” the complaint says. “He even had new plates issued from the registry to replace on the car to hide the fact of the original plates in the incident.” 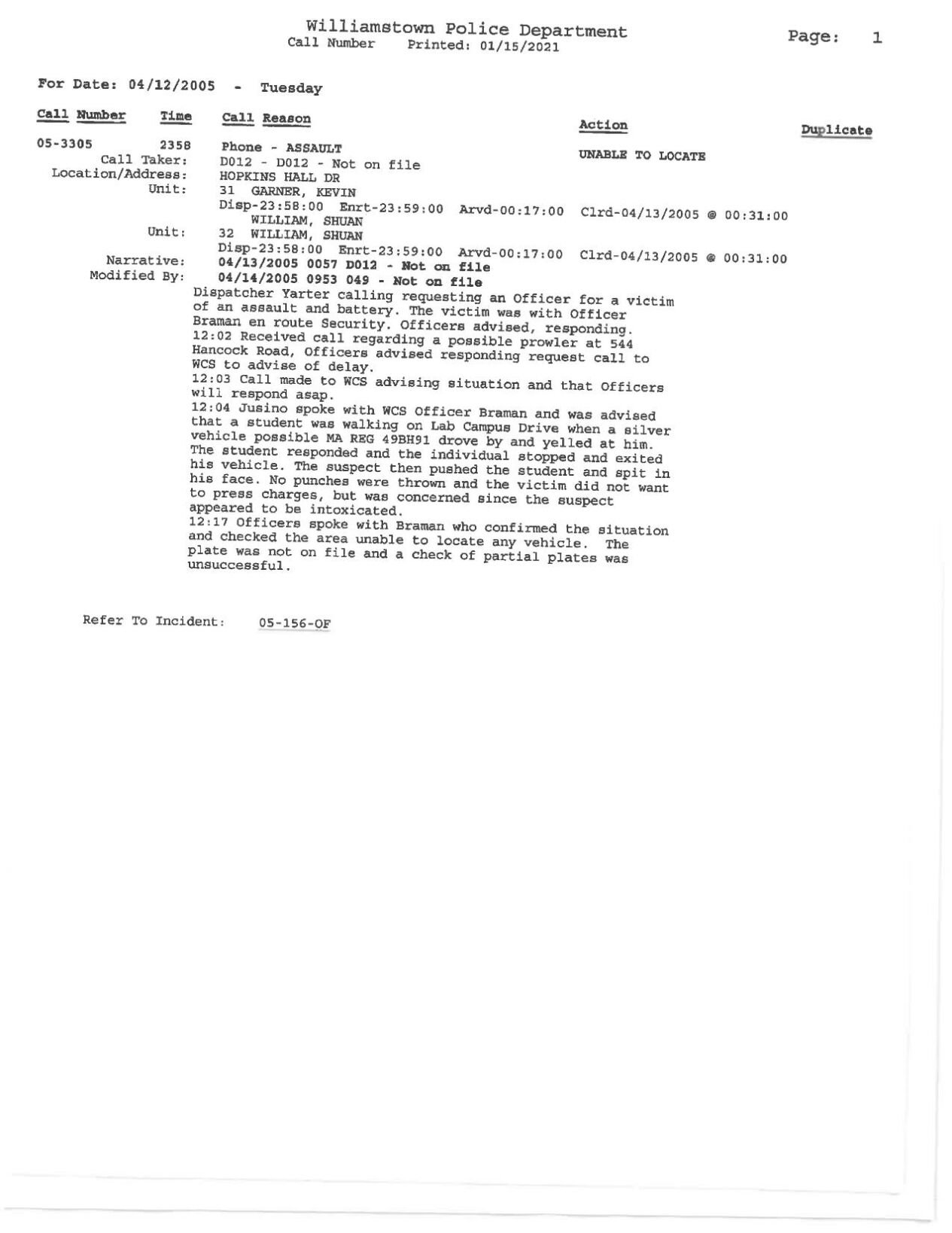 A copy of the document was obtained by The Eagle.

The undated complaint, addressed to Hoch and all five members of the Select Board, says the conduct it describes is believed to constitute a “fireable offense.”

“Officers reported this information to Chief (Kyle) Johnson, who later confirms that McGowan admitted being the person who assaulted the college student and to falsifying the police log information,” the complaint says.

Johnson resigned as chief in December, as a direct result of allegations in McGowan’s lawsuit.

In an interview Monday, Johnson confirmed that the complaint against McGowan accurately recaps what he told officers at the time. McGowan was not disciplined for falsifying the records, but met with Johnson in a session attended by McGowan’s father, Edward, the town's former fire chief.

“I remember that I had him in my office with his father and he admitted to everything,” Johnson said. “His father said it would never happen again.”

The Eagle also spoke to two people who confirmed being aware at the time that McGowan had altered the police report and had been in the altercation with the Williams student.

McGowan’s attorney, David A. Russcol, of Boston, termed the complaint an act of retaliation and said the allegation that McGowan doctored a report is “completely unfounded.” He responded to questions from The Eagle.

“There has been no documentation of such an allegation in Sgt. McGowan’s personnel record over the past 15 years. He adamantly denies and is stunned to learn that there was an allegation about any falsification of documents, ever,” Russcol said.

“Any alteration would have been logged in the system and would be easily discovered and documented. Sgt. McGowan never admitted falsifying records, because that is not true,” he said. “This is nothing more than an assault on a commanding officer by those opposed to necessary change within the Department.”

McGowan’s lawsuit, withdrawn in December, named Hoch as a co-defendant and also resulted in his decision to step down this spring. In that suit and an earlier filing with the Massachusetts Commission Against Discrimination, McGowan alleged that he and others were subjected to unwanted sexual touching, racist epithets, demeaning remarks and retaliation — conditions that created a hostile work environment.

In this month’s complaint, officers claim that McGowan himself has been responsible for creating a hostile work environment.

Documents obtained through public records requests by The Eagle show that, on April 14 and April 17, 2005, McGowan modified a police record about the incident. Those changes are recorded in the document by his officer number, 037.

Former Williamstown Police Chief Kyle Johnson and former Sgt. Scott McGowan are reported to have contributed to the racially and sexually char…

At least two members of the police force went to Johnson to report that they believed McGowan had changed the incident report. The records system does not preserve earlier copies of reports after they are modified.

Two Williamstown officers responded to the 2005 call at the college, which came two minutes before midnight April 12. The initial report filed later by Williamstown Police said that Scott B. Braman, a member of the college security force, told officers that a 20-year-old male student had been walking that night when the operator of what was described as a small silver vehicle “drove by and yelled at him.”

“The student responded and the individual stopped and exited the vehicle,” the report says. “The suspect then pushed the student and spit in his face. No punches were thrown and the victim did not want to press charges, but was concerned since the suspect appeared to be intoxicated,” the report reads. The case was logged as an assault and battery.

In a report April 13, 2005, one of the responding Williamstown officers recapped the version provided by Braman, with small differences about who spoke first — the driver or student.

“He claims he yelled at the driver who stopped and asked him what he said. (The student) repeated what he said, unknown person told him to walk away, then pushed & spit at (the student),” the report says. “(The student) must have gotten plate # wrong because the registration could not be found.”

Because earlier copies of the report were not archived electronically, it isn’t clear what was changed. One officer with direct knowledge of the incident said McGowan transposed two letters and two numbers, in what the officer said was an effort to conceal that the car McGowan had been driving that night was registered to a female friend.

In addition to resignations by Johnson and Hoch, McGowan’s suit led the Select Board to commission an outside review of the Police Department, after declining public calls to do so while the litigation was pending. The town has hired Judy A. Levenson.

As The Eagle reported this month, McGowan has been the defendant in several criminal cases while working as a Williamstown Police officer. They included a domestic assault and battery case in 1999 and a charge of negligent operation of a motor vehicle in Bennington, Vt., in 2009.

McGowan admitted to facts sufficient to warrant a guilty finding in the North Adams assault and battery and was ordered to receive private counseling. At the time, he held the status of special officer in Williamstown, a title used for junior, part-time employees.

Bilal Ansari and Williamstown Police Lt. Michael Ziemba kneel together in August, after Ziemba placed a Black Lives Matter sign next to the po…

In the Vermont case, a state trooper said McGowan was stopped at 1:18 a.m. Nov. 20, 2009, after he was seen weaving on the road, changing lanes and disregarding two stop signs. He pleaded guilty, was fined $500 and had his right to drive in Vermont temporarily suspended.

Last week, fallout from McGowan’s lawsuit continued. Ziemba, the acting chief, said three members of the force have been disciplined for improperly using a database to look up Registry of Motor Vehicles records of people who have been critical of the department in the wake of McGowan’s lawsuit.

Russcol said that misuse of the database is evidence of a department in need of reform, which he said McGowan seeks to provide.

“Sgt. McGowan has spoken up against disturbing behavior that has infected some parts of the WPD for years,” Russcol said. “Unsurprisingly, some officers are apparently uncomfortable accepting that the old methods of behavior will no longer be tolerated under new leadership. Sgt. McGowan will not be bullied or silenced, despite those efforts to do so.”

Russcol said some officers may be unhappy to have been disciplined by the sergeant in the past.

“Such corrective action may not always have made him popular with those who have had their work criticized. He did this all for the betterment of the community and the department,” Russcol said.

“Any reference to a decades-old allegation is nothing more than an attempt to paralyze the progress Sgt. McGowan remains committed to,” Russcol said in the statement.

Public criticism of the department came to a head last fall, amid calls for Johnson and Hoch to resign. Residents protested outside the department in late August.

In October, members of the department wrote to the Select Board and the Diversity, Inclusion and Racial Equity Committee to say they believe they have been subjected to “unfair and false allegations” about their work in the community.

Editor's note: This story has been updated to correct Edward McGowan's status with the Williamstown Fire Department as of 2005. He retired as chief in 2002.

Williamstown sergeant claims, in a new filing, that he’s a whistleblower and the town is retaliating against him

Days before he faces a possible firing, a Williamstown police sergeant is again accusing the town of bias and retaliation, portraying himself as a whistleblower who received unjust treatment by local officials before and after he brought a federal lawsuit last year.

Two sources tell The Eagle that Sgt. Scott E. McGowan's 19-year full-time career with the Williamstown Police Department was to end as of midnight Monday.